This website requires certain cookies to work and uses other cookies to help you have the best experience. By visiting this website, certain cookies have already been set, which you may delete and block. By closing this message or continuing to use our site, you agree to the use of cookies. Visit our updated privacy and cookie policy to learn more.
Home » Rheological Investigations on the Drying of Polymer Dispersions and Paint Films
Paint and Coatings AdditivesArchitectural Coatings

Among the technical challenges that have arisen due to the switch from solventborne to waterborne paints - driven by the regulatory push towards a more sustainable coatings industry - the control over the drying and film-forming process of paint dispersions has been a matter of intense investigation in recent years.

The Challenge of Measuring Open Time

Advanced analytical methods and imaging techniques have been used to gain insights into the mechanisms driving the film-forming process and to identify factors that influence open time.1 Regardless of sophisticated analysis, we still see the need for a simple and easily accessible method that allows for quantitative differentiation of drying behavior of aqueous paints and, moreover, one that will help formulators to select the most favorable ingredients for specific products and applications. This is particularly relevant for the identification of additives for the prolongation of open time, which refers to the period of time remaining after paint application to make corrections without leaving visible defects in the film. This part of the painting process is still a challenging task due to the lack of an objective and stable method for its evaluation.

The current ASTM D7488 method relies on subjective visual assessment of repainted marks on drawdown paint film.2 In practice, this method is not reproducible and consistent, due to nonstandardized factors such as the force applied during brushing, among other things. It often fails in performance differentiation when comparing the effect of paint additives on drying. A more intuitive, but less sophisticated method to characterize the drying of paint films can be provided by a rheometer, using a needle affixed to the classic plate geometry, which slowly rotates through the paint film. This has been described in previously published literature.3 The main disadvantage of this method is that it relies only on a one-point measurement and therefore may be sensitive to film inhomogeneities.

In this article, a novel rheological measuring system adapted from the previously referenced needle-plate system is presented. The new system consists of 12 evenly distributed 2-mm-thick pins attached to a ring, as shown in Figure 1. The increase in the number of pins provides a higher torque response and therefore a higher sensitivity towards viscosity changes in the film during drying. It also reduces the influence of inhomogeneities in the paint film thanks to the multiple point measurement technique in comparison to the one-point measurement. Moreover, undisturbed water evaporation from the film is guaranteed due to the open design of the measuring system, as the pins are attached to a ring and not to a condensation-prone plate, which might create a local humidity environment. 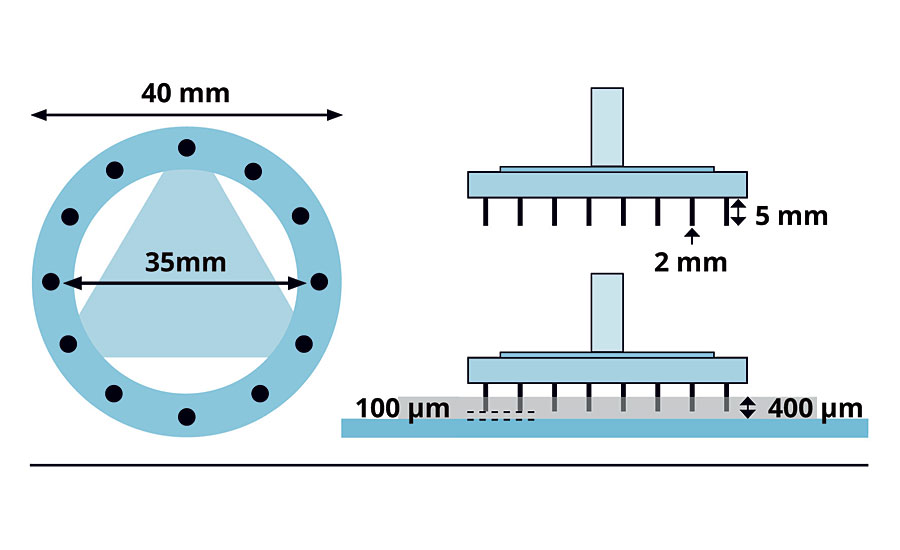 This novel measuring system has been used to investigate the influence of several additives from the Clariant company on the drying process of aqueous polymer dispersions and paints. In a typical measurement procedure, a paint film was drawn down on a glass plate using a 400-µm applicator blade and immediately transferred to a Thermo Scientific™ HAAKE™ MARS™ 60 rheometer. The glass plate was placed on a flat support and fixed with a metallic ring, as shown in Figure 2. The measurement was started and the pins penetrated into the paint film, leaving a 100‑µm gap between the head of the pin and the glass plate. The ring was then rotated at a constant speed of 0.01 rpm for the duration of the measuring period, which was typically between 30 to 60 min. During measurement, the increase in torque over time was recorded as an indicator for the drying of the film. For each sample, the measurement was repeated three times and the final torque shown as the average value of the three measurements. All averaged measurements were conducted at similar temperature (±1 °C) and relative humidity (± 2 %), which were directly tracked during the experiments. 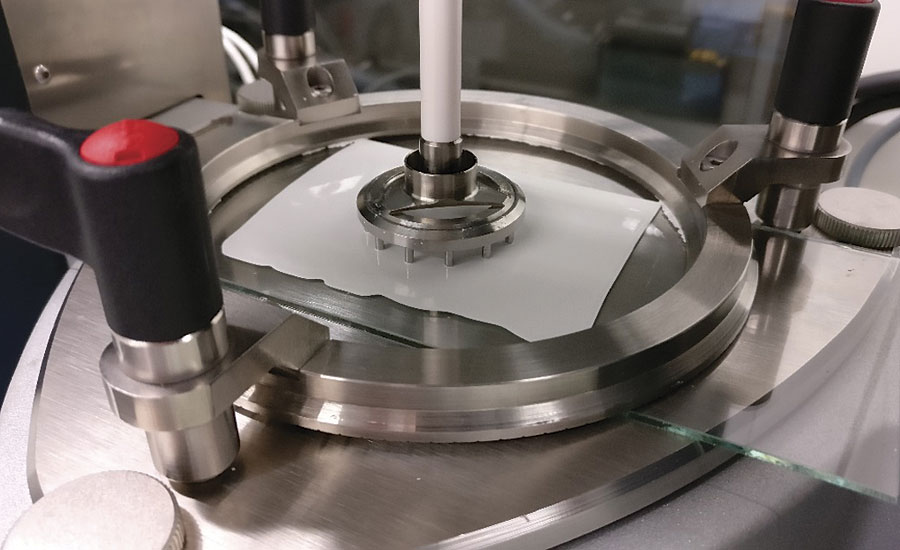 FIGURE 2 » Paint film fixed on rheometer during measurement with the new 12-pin-ring geometry.

New Method Put to the Test

To show the potential of the new method, several systems were examined. Initially, the drying behavior of aqueous polymer dispersions and the effect caused by the inclusion of additives on drying were studied. Subsequently, low- and high-pigment-concentration paints were formulated based on the previously characterized binders, and the impact of additivation was investigated.

What Role Does Binder Stabilization Play?

As test systems, four commercial aqueous polymer dispersions used as binders for paints were selected. An overview of properties of the binders is shown in Table 1 (note: if no remarks were included, the data was reported in the technical documentation from the supplier). 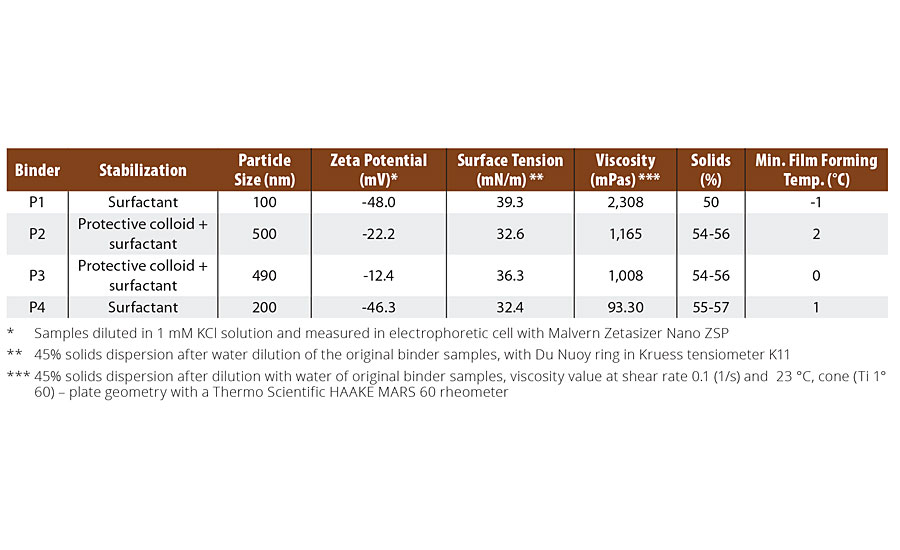 TABLE 1 » Overview of properties of the binders.

Binders P1 and P4 are both stabilized by surfactants only, whereas P2 and P3 are stabilized by different combinations of surfactants and polymeric compounds. Whereas P2, P3 and P4 are based on vinyl acetate-ethylene, P1 is made from acrylates. In order to fairly compare the drying speed of the binders, the solids content of all four dispersions was adjusted to 45% through dilution with deionized water. At this concentration, the viscosity of the dispersions was still suitable to draw down stable 400 µm wet films. In Figure 3, the change in torque over time is shown. Interestingly, both binders P2 and P3 show a very similar drying profile. Despite having similar small particle sizes and zeta potential values, the binders stabilized only by surfactants show rather different drying behaviors. The binder P1 already shows a steep increase in film viscosity after 10 min, whereas for the binder P4 the increase in torque takes place after roughly 50 min. 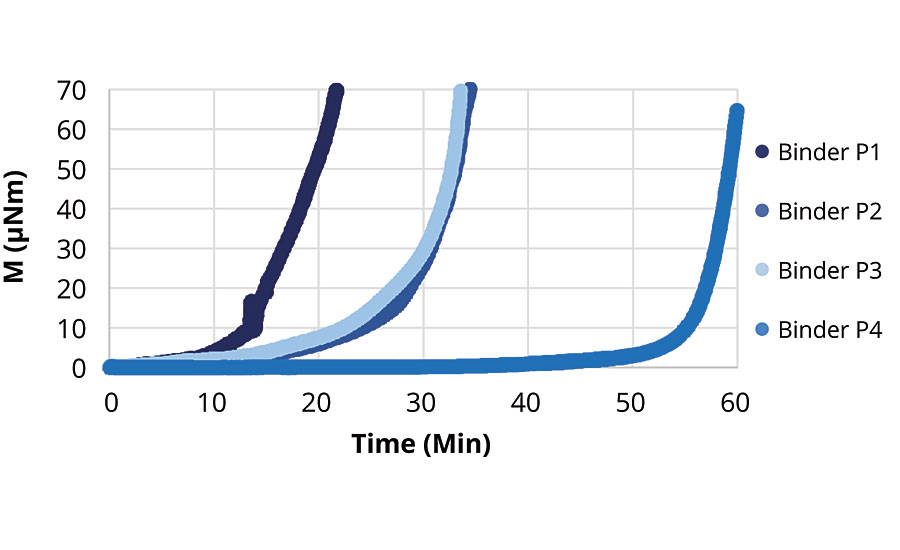 Influence of Additives on Drying Behavior

In order to illustrate how the new measuring method can be used to assess the way in which additives might affect drying behavior of the binders, the effect of supplementing two additives in 1 wt% to the polymer dispersions was investigated. A well-established open time extender additive was chosen as additive A1, and additive A2 was tested as a potential alternative. The results are shown in Figures 4 to 7. The purple curve shows the drying of the binder as a 45% aqueous dispersion, with the red curve showing the effect caused by the addition of 1 wt% of additive A1, and the green curve the effect generated by additive A2. Interestingly, each binder is affected by the additives in a different manner. In comparing surfactant-stabilized binders, additive A2 has a major impact over A1 in the drying behavior of binder P1, whereas the opposite is true for the binder P4. This observation suggests that specific additive-binder interactions may be responsible for the prolongation of the low viscous range before a steep increase in torque occurs, indicating the start of the film formation. For binder P2 similar ability to retard the increase of film viscosity is seen for both additives, although the increase of viscosity is steeper in the case of additive A1 than for additive A2. In the case of binder P3, the additives are not able to influence the drying behavior, thus suggesting that this is strongly controlled by the protective colloid-surfactant mixture already used to stabilize the polymer dispersion, and that this mixture may hamper further interactions between the polymer particles and additional additives. 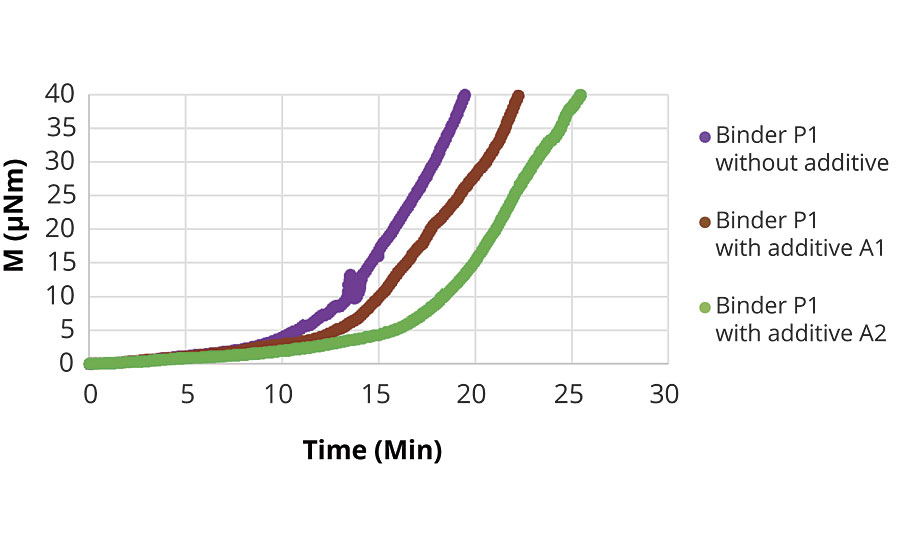 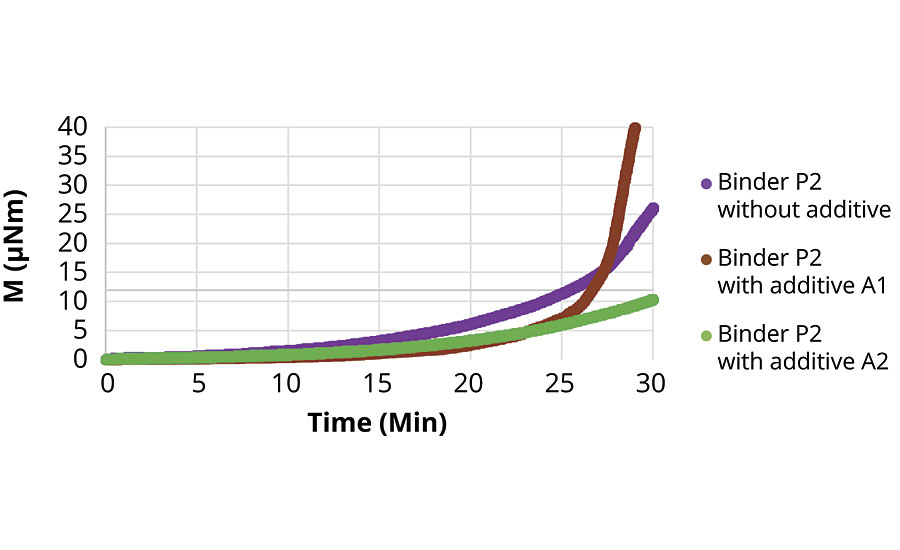 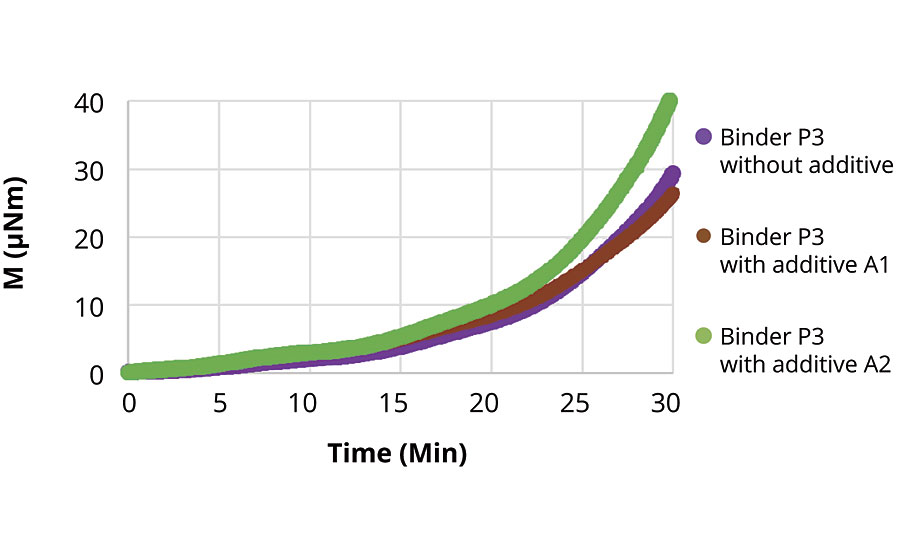 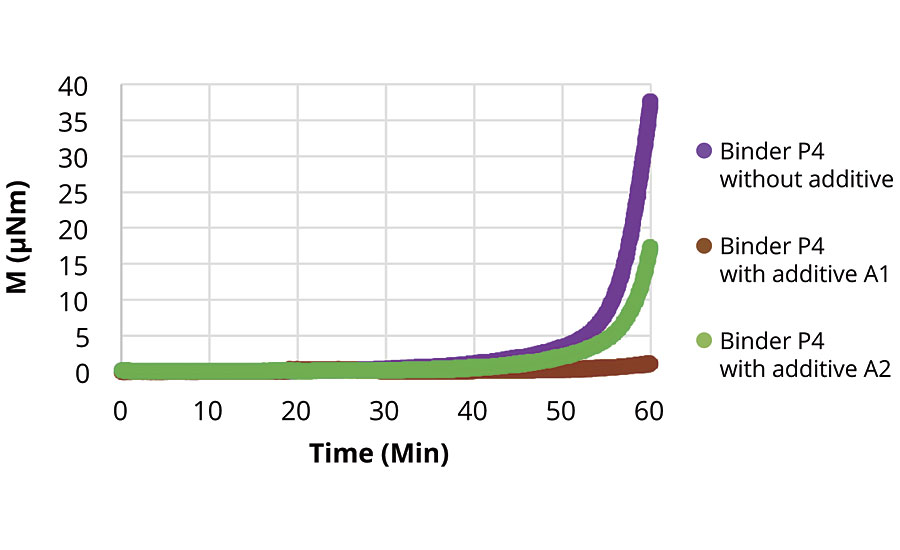 Interaction of Additives and Binders in Paint Formulations

In a subsequent step, the new methodology was tested in paint formulations. Binder P4 was incorporated in two paint formulations with high and low pigment volume concentration respectively – the compositions of which are described in Table 2. Three samples were tested based on this formulation, containing 1 wt % of additive A1 or A2, or a blank sample completed with deionized water. 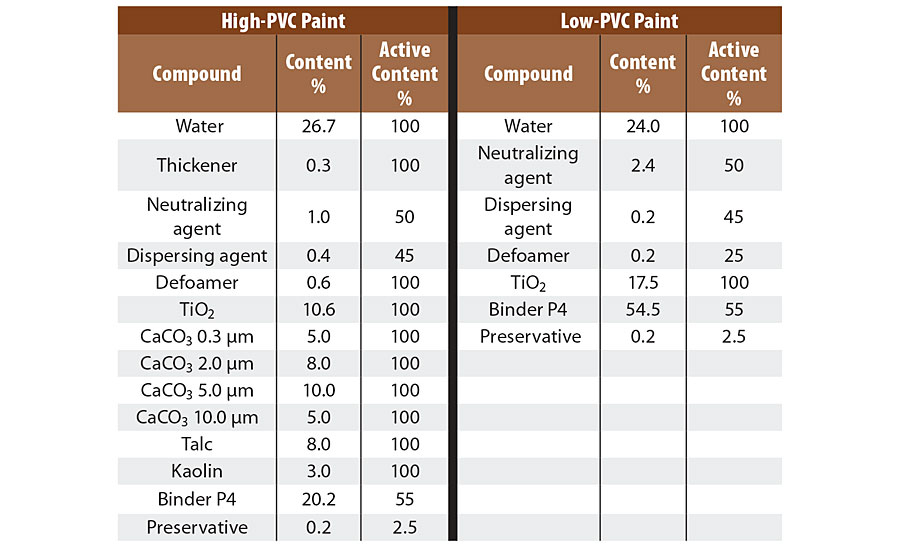 In comparison to the pure P4 binder films shown previously in Figure 7, the changes in film viscosity are detected at shorter times in the case of paints (Figures 8 and 9). The trend observed fits with expectations – that the formulation with the highest pigment to binder ratio shows the fastest drying. The performance of the additives differs across the three systems. Although additive A1 was able to effectively stabilize the low viscous state of the film in the pure binder formulation, it shows an accelerating drying effect in the low-PVC paint. In the high-PVC paint, a similar retardation in the steep increase of film viscosity is achieved by both additives A1 and A2, whereas in the low-PVC paint additive, A2 slows the increase of film viscosity in comparison to the paint without an additive. These observations indicate that in paint formulations the interplay of interactions between additives and the rest of the components such as binder particles, pigments and dispersing agents may be crucial to determine the drying behavior of the system. Further investigations of additive-pigment interactions may be required to get a better understanding of the role of additives during the drying of paint films. 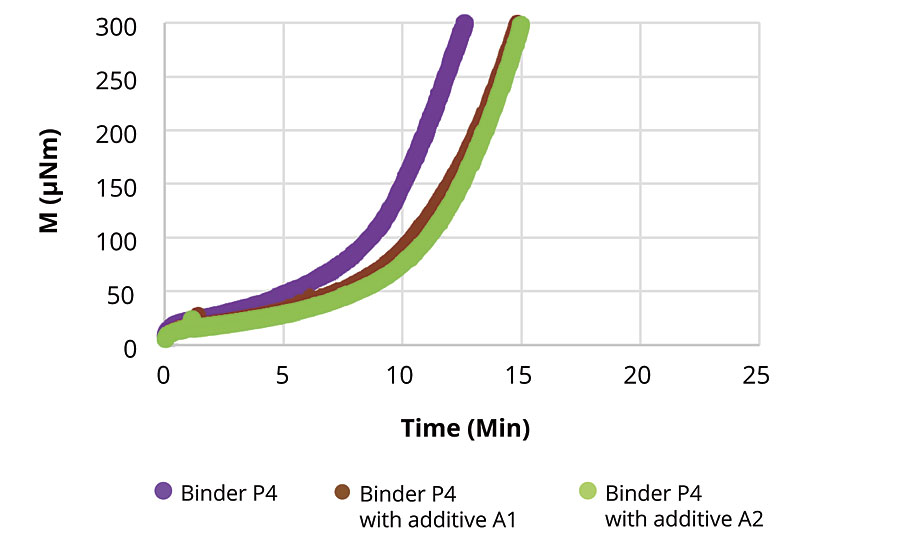 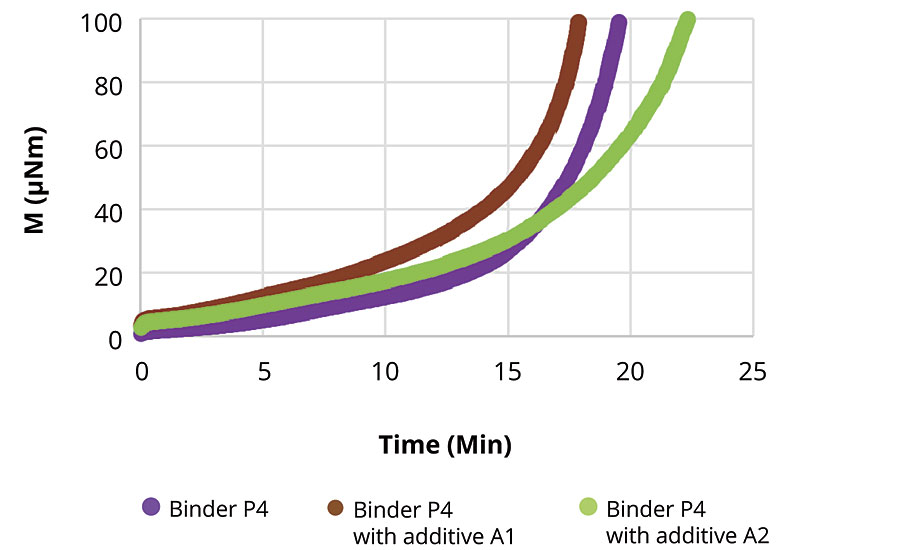 Summarizing, a simple rheological method based on a novel measuring system has been presented that enables the investigation in drying behavior of aqueous paints. The new system is based on 12 pins equidistantly affixed on a ring geometry with an outer diameter of 40 cm, which is then attached to a highly precise air-bearing rheometer. The pins penetrate a freshly applied wet paint film of defined thickness and slowly rotate through it. The detected change in torque over time is directly related to a change in film viscosity and allows for detection of the formation of a high-viscous, close-packed arrangement of particles as a characteristic transition during drying. The method has been successfully tested in the characterization in drying behavior of four commercial polymer dispersions and also in the investigation of the effect of two additives on the drying process of polymer dispersions. Furthermore, the method has been successfully used to evaluate the impact of additives on drying of high and low pigment volume. The new test system will help formulators to select easily and objectively the most favorable ingredients to optimize drying behavior of aqueous paints.

On the Track of Corrosion