Neutralizing agents are used in only small quantities in water-based paints. However, they can have a significant effect. Not only do they regulate the pH value, they also make a positive contribution to the storage stability of the paint by reducing the interaction between the paint ingredients. If neutralizing agents also comply with health and environmental-relevant aspects, such as being VOC-free and hazard label-free, they are of particular interest for ecolabel-certified paints.

Over the course of a human lifespan, it is estimated that 90% of that time is spent indoors. As people desire to live in healthier indoor surroundings, they increasingly demand water-based paints that are free from air pollutants, hazardous substances and allergens. For consumers, it can be difficult to keep track of the different critical substances, therefore they rely on ecolabels in their buying decisions.

With currently available raw materials and additives, it is no easy task for a paint formulator to develop a high-quality paint that offers performance advantages, is easy-to-use and at the same time fulfills the stringent ecolabel criteria. Formulators therefore consider not only function but also environmental profile when it comes to selecting paint ingredients. Additives should be multifunctional and universally applicable in order to reduce formulation complexity, raw material handling and logistics costs. In addition, they need to comply with regulatory requirements, safety and environmentally relevant aspects.

This article introduces the novel, sugar-based amine (glucamine) Genamin® Gluco 50 that was developed specifically for use as a multifunctional performance additive in ecofriendly, water-based paints. In the course of the article, the application and performance profile is discussed in detail in comparison to common neutralizing agents on the market.

Neutralizing agents can generally be classified as standard or multifunctional. Standard neutralizing agents are only used to adjust the pH to the range of 8-10 and thereby provide a stable paint system with little interaction between the different formulation components such as thickeners, binders, fillers and biocides.

Multifunctional neutralizing agents also offer other properties that would normally be provided by other additives in a paint formulation. For example, they can act as a wetting agent or compatibilizer for pigment pastes or can significantly improve the paint’s storage stability. Thus, they enable paints with superior quality and performance. Reducing the number of paint components in the formulation is a great advantage for the manufacturer as it means lower formulation complexity, less raw material handling and lower logistics costs.

There are various neutralizing agents available to the paint industry. The most common neutralizing agents on the market are standard products such as caustic soda (NaOH), ammonia or the multifunctional additive aminomethyl propanol (2-amino-2-methyl-1-propanol). Clariant has developed a sugar-based specialty amine that is new to the market. In order to create a comprehensive assessment of these neutralizing agents, environmental, health and safety aspects have been considered in addition to performance characteristics.

How Sustainable are Neutralizing Agents?

Environmental, health and safety apects play an increasing role in the selection of suitable ingredients. To fully assess a product’s sustainability profile, a variety of aspects need to be taken into consideration.

To support this, Clariant, developed the EcoTain® label a few years ago. EcoTain is a sustainability concept at product level that helps to evaluate a product’s impact on three dimensions: people, planet and performance. Hereby products are screened against 36 sustainability criteria, overarching the complete product lifecycle and are also benchmarked against market standards. A selection of important sustainability aspects is listed in Table 1. 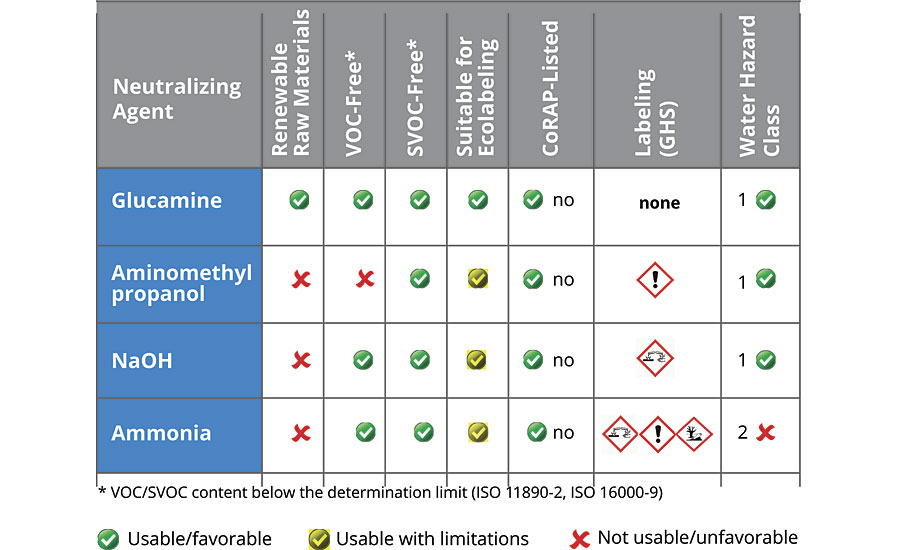 TABLE 1 » Evaluation of neutralizing agents based on envinronmental, health and safety aspects.

Due to their hazardous substance labeling and the VOC/SVOC content, many common neutralizing agents have limitations when used in a modern and environmentally conscious formulation.

Matters such as labeling or VOCs play an important role, especially in light of ecolabels such as the German Blue Angel, the EU Eco Flower, the Nordic Swan and the French Décret seal. It is no easy task for a paint formulator to develop a high-quality paint that fulfills stringent ecolabel criteria. The VOC/SVOC limits of the German Blue Angel for example represent a real challenge. Even by using low-VOC/SVOC ingredients, the formulation might already exceed the limit of 1 g/L for indoor paints or 2 wt.% for lacquers.

In the evaluation of the neutralizing agents’ suitability for ecolabels, glucamine as a multifunctional neutralizing agent stands out, as it is the only one that can be used in unlimited amount in paints that are certified with the Blue Angel, Nordic Swan, French Décret and the EU Ecoflower. Although the renewable content is not yet a criteria for ecolabels, another advantage of glucamine is that it consists of up to 75% glucose and is therefore very much in line with the trend of renewable raw materials.

The aminomethyl propanol multifuntional neutralizing agent on the other hand is only allowed to <1% in lacquers and <0.07% in interior paints labeled with the Blue Angel. For the Nordic Swan the usage concentration is limited to 4.5% for gloss lacquers and only 1.1% for matte paints. The EU Ecoflower is even stricter, and the dosage should be below 0.5% for class A, B,C.

The picture for the standard neutralizing agents looks varied. Ammonia cannot be used at all in indoor paints with the Blue Angel seal or is limited to <1% for lacquers. For the EU Ecoflower, the maximum dosage concentrations are between 0.5%-1% depending on the paint category. Caustic soda on the other hand can be used in unlimited concentrations for the EU Ecoflower, but is also limited for the Blue Angel lacquers to <1% and for the Nordic Swan to <2% due to the labeling.

Neutralizing Agents Put to the Test

In addition to the environmental, health and safety aspects, the performance of the products was also evaluated. Hereby, the neutralizing agents were formulated into standard acrylic gloss and semigloss lacquers, both low-PVC paints, as well as in high-PVC indoor and outdoor paints, and in pigment preparations.

Figure 1 shows that it is possible to formulate stable paints with all neutralizing agents. When stored for 28 days at 50 °C, which corresponds to two years’ shelf life at room temperature in the Central European climate, none of the lacquers showed the appearance of syneresis or more pronounced sedimentation. Likewise, the pH level remained stable. With regard to rheology, there are clear differences, especially in the semigloss system. Immediately after manufacturing the lacquers, the viscosity remained nearly the same between the different neutralization agents. However, after 28 days warm storage, the viscosity of the glucamine-containing lacquer increased only slightly compared to the other neutralization agents. 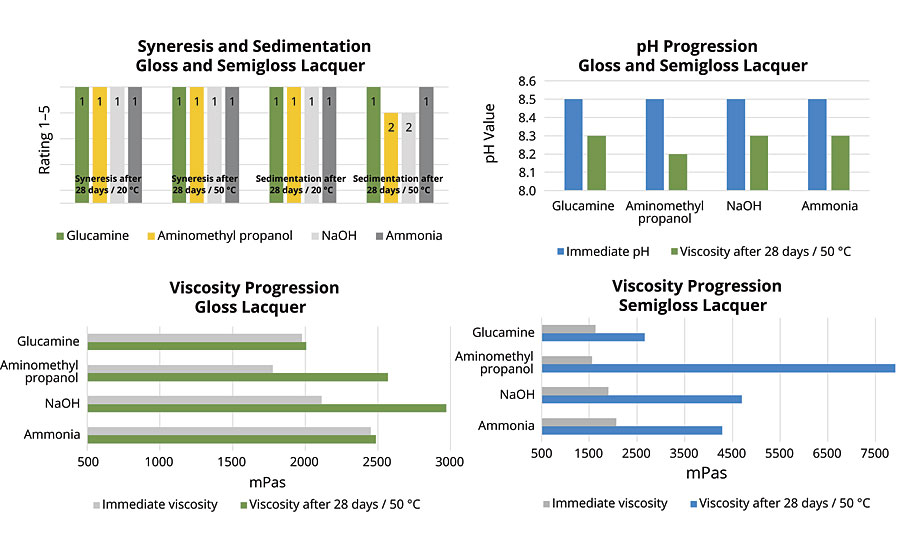 In addition to storage at room temperature and in heat, frost is a further factor that can affect paints and, in the worst case, make them unusable.

To assess the freeze-thaw stability, the paints were first frozen for 12 hrs at -18 °C and then thawed at room temperature for 12 hrs. Afterward, it was evaluated whether the paints were still technically flawless.

Figure 2 shows that both glucamine and aminomethyl propanol have withstood the maximum number of five cycles and contributed additional stabilizing properties to the paints. The coatings with the standard neutralizing agents NaOH and ammonia were unstable after three cycles. 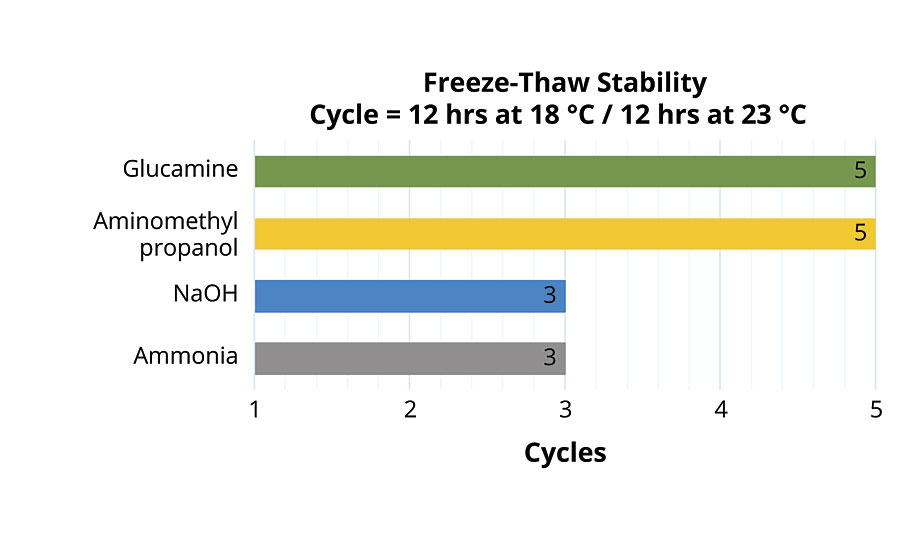 In addition to influencing the stability of the liquid paint, the ingredients also affect the dried film and therefore the decorative and protective functions of the coating.

Figure 3 shows the results of the pendulum hardness tests, measured in seconds, after different drying times over a period of 1-4 weeks, which corresponds in practice to the drying and complete drying of the coating. 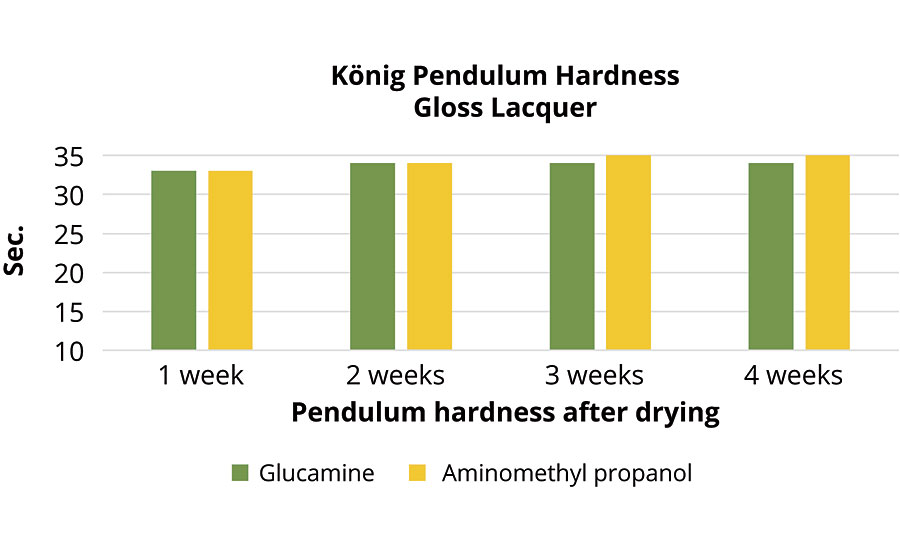 A comparison of both multifunctional neutralizing agents – the VOC-containing aminomethyl propanol and the VOC/SVOC-free glucamine – shows that the products have no significant effect on the drying rate, either to achieve the final film hardness or on the film hardness itself. Therefore, replacing the aminomethyl propanol in a formulation with the nonmigrating glucamine neutralizing agent will have no negative impact on the drying process.

Regarding the drying behavior on metallic substrates, the neutralizing agents show different behavior in the rust formation and discoloration of the paint.

A 120-µm thin wet film was applied on a metal plate (Q-Panel type S-46) and then immediately stored at 23 °C and 50% relative humidity for 24 hrs for drying. As shown in Figures 4 and 5, the rust film appears as brown rust spots and the discoloration appears over the entire paint film. 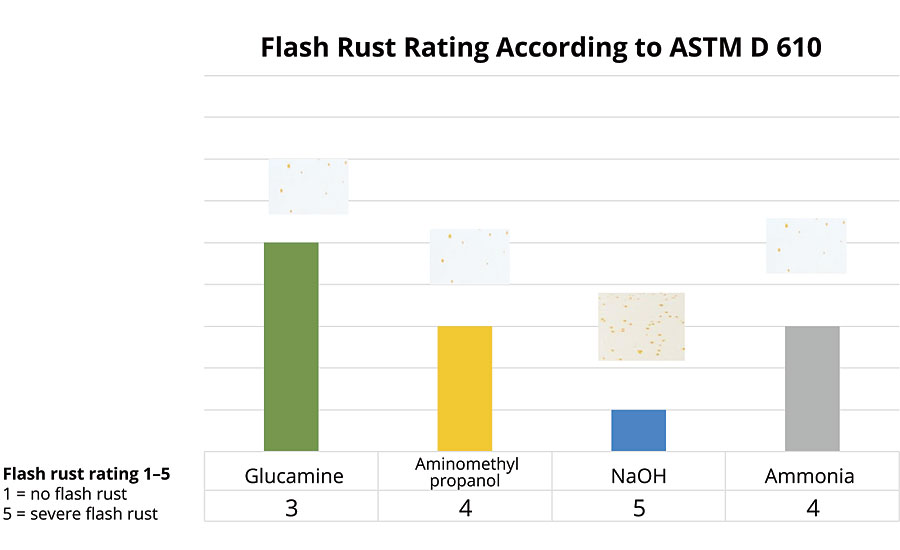 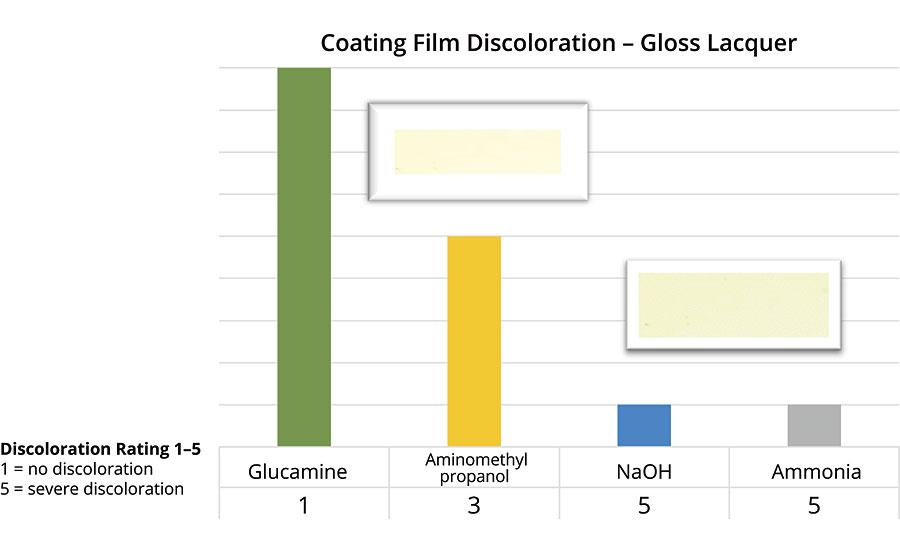 Glucamine showed the lowest tendency to initiate rust and create a discoloration in the film.

Shift of Shades in Tinted Systems

Paints are currently not only used as white or colorless coatings, but are tinted to various shades in construction and professional markets. The effect of the neutralizing agent on coloring was therefore evaluated.

During evaluation, acrylic gloss coatings neutralized with ammonia tinted in blue, green, red and black shades were set as a standard and compared to the alternatives. Figure 6 shows that the traditional and glucamine multifunctional neutralizing agents demonstrate a comparable shift of shades in the L and +b axis for all pigment pastes used and therefore allows these products to be interchangeable in mixing systems. (Note: a shift of shade of 0.1-0.2 is not evaluated as a significant deviation since it is still in the measurement tolerance.) 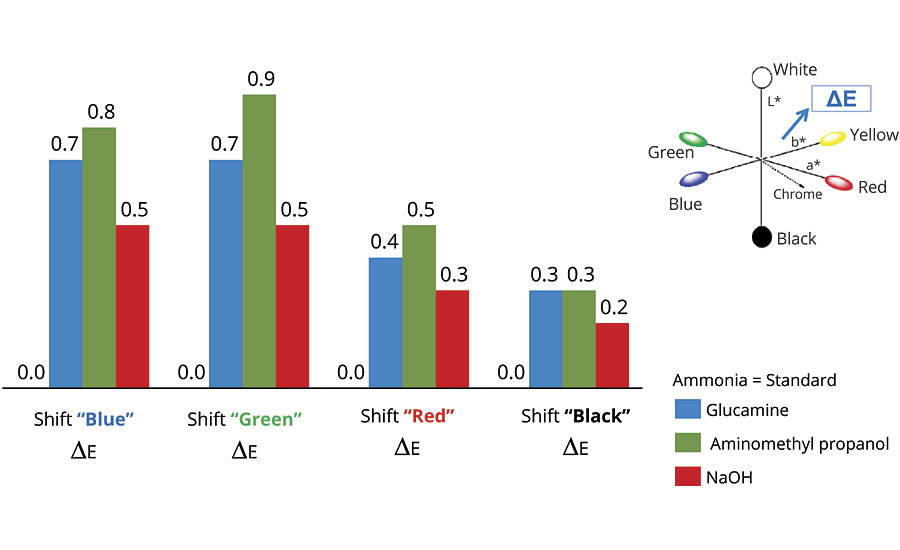 It was initially described that multifunctional neutralizing agents could also act as a wetting agent or compatibilizer, for example when tinting a high-PVC emulsion paint with pigment pastes.

For the test, a standard low-VOC emulsion paint with various neutralizing agents was adjusted to a pH value of 8.5 and subsequently tinted with a water-based iron oxide red pigment paste (3% each). After the homogenization using a paint shaker, the paints were stored for 24 hrs; then 200 µm was applied and subjected to a rub-out test.

As can be seen in Figure 7, glucamine increases the tinting strength in the water-based paint system by more than 50%. 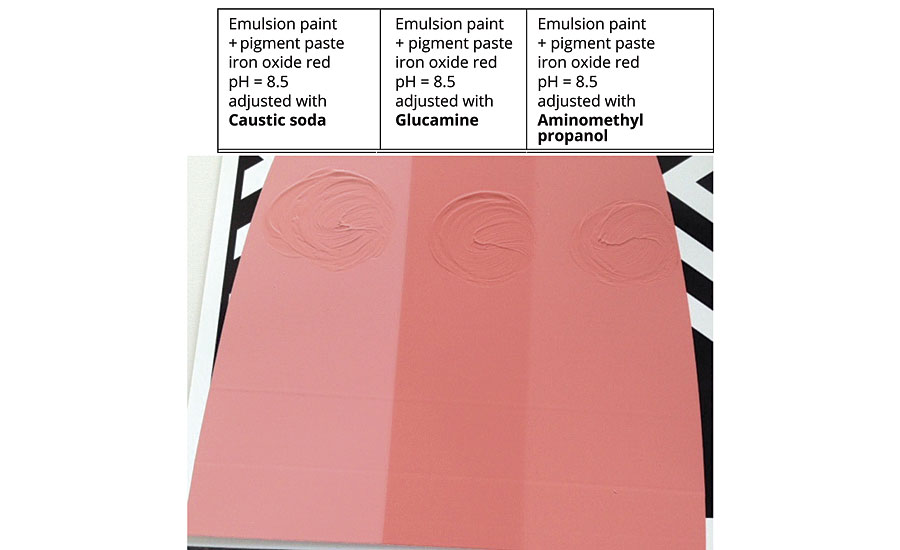 Neutralizing agents are only used in small quantities in water-based paints. However, their effect is of significant importance. Not only do they regulate the pH value, they also interact with paint ingredients and influence the stability of the paint during storage. There are a number of neutralizing agents for the paint and coatings industry.

Glucamine from Clariant is new to the market. It consists of up to 75% renewable raw materials, does not require labeling and is VOC/SVOC free and is therefore especially suitable for ecolabel-certified paints. From a performance point of the view, glucamine as a multifunctional additive improves the storage and freeze-thaw stability, reduces flash-rust discoloration and enhances the compatibility with pigments. These properties can be achieved in low-PVC acrylic paints, high-PVC indoor and outdoor emulsion paints, and pigment paste preparations. Thanks to this multifunctionality, the glucamine Genamin Gluco 50 helps to reduce the number of components in the paint formulation and thus contributes to process and logistics cost savings. 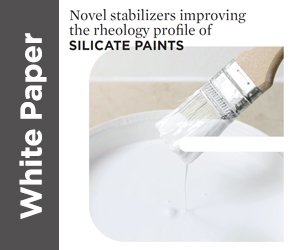 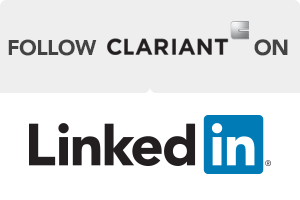