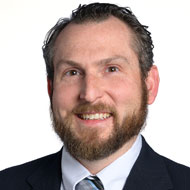 Eric graduated with a bachelor’s degree in Chemistry from Malone College and an MBA from Cleveland State University. He has over 20years industrial experience working in the paints and coatings, and injectable pharmaceutical industries. During this time he worked in a variety of different roles including paint formulation, quality assurance, marketing and product management. Eric has been with Lubrizol for 10 years, where he’s currently a Technical Marketing Manager supporting Resins & Polymers within their Performance Coatings Group.

Design of High-Performance, 1K, Direct-to-Metal Polyamide-Urethane Coatings
Lubrizol has developed new waterborne resin technology that utilizes polyamide-based polyols as the soft segment in polyurethane coatings. Novel polyamide-polyurethane polymers have recently been introduced to the market for use as protective metal topcoats, offering high levels of hardness, chemical resistance, and durability similar to solventborne systems but in an easy-to-use, 1K waterborne system. This work expands on that concept to create DTM-capable polyamide-polyurethane coatings by addressing the challenges of film formation, adhesion and corrosion resistance on CRS substrates. When analyzed by SEM/TEM it was found that within pigmented polyamide coatings, voids/pores form throughout the film localized at polymer-pigment interfaces. This void formulation was studied as a function of VOC content, polymer particle size and PVC to better understand these interactions and maximize coating performance. Performance was evaluated through EIS and salt spray analysis then benchmarked against an array of conventional protective coatings.