Corrosion has been defined as an interaction of a material with its environment that results in an irreversible degradation of the material.1 Although organic coatings are often used to prevent the surface of a material from coming into contact with the corrosive environment, compromises in the formulation of many water-based coatings to improve adhesion can reduce their effectiveness at abating corrosion. Recent work with hybrid styrene acrylic polymers containing hydrophobic resin has shown that an improved balance of properties is possible compared to conventional acrylic or styrene acrylic polymers.

The reaction that takes place during corrosion of steel is caused by the creation of an electrochemical cell. This electrochemical cell needs four components to function – an anode, a cathode, a connection between the two and an electrolyte. The surface of steel is rather heterogeneous and has sites that can be anodic or cathodic, and the connection between them is provided by the steel itself. If the steel is exposed to an electrolyte like seawater, then all four necessary components of the cell are present and the corrosion on the surface of the steel will begin.

If an organic coating is applied to steel then the electrolyte (with its water, oxygen and ions) can theoretically be kept separate from the steel. Unfortunately, water and oxygen can penetrate most organic coatings fairly easily.3,5 The ions cannot penetrate the organic coating as easily; most organic coatings are very good barriers to ions.3 There must be channels through the coating to the surface that will conduct the ions for corrosion to start on coated steel. Some authors3,4 have proposed that liquid water in contact with the coating can create these conductive channels that allow the transport of the ions to the surface.

The proposed mechanism5 for creation of the conductive channels (Figure 1) begins with water uptake of the coating film. This water uptake does not occur evenly across the coating surface, however. Water is first absorbed into hydrophilic pockets that are composed of low-molecular-weight polymer units, surfactants or salts from the polymer or coating formulation. These pockets are created between polymer structure units as the film dries because the free hydrophilic ingredients migrate into areas of residual water during dry. When the dry film is later exposed to liquid water, the hydrophilic pockets can absorb a significant amount of water, with some authors estimating 45% -75% by weight3,5 as opposed to just 5% by weight for the polymer units. As they absorb water these pockets swell along the boundaries of the polymer units, and eventually link up to form a pathway through the coating. This pathway allows ions to pass freely through the coating. The ions, along with the water and oxygen, can initiate the corrosive reactions at the surface of the steel. 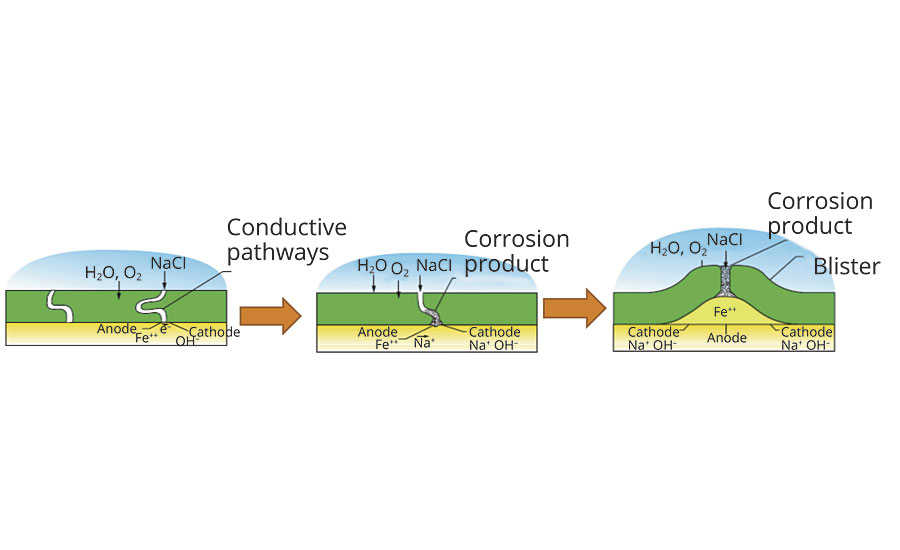 Once the ions have reached the surface through conductive pathways, the passivating layer of metal oxide at the surface is degraded (a process accelerated by the chloride ion2) and the anode is created at the base of the conductive pathway. The iron is oxidized at the anode, creating soluble ferrous ion and releasing a pair of electrons that travel through the steel to the cathode created on the surface immediately adjacent to the anode. At the cathode the dissolved oxygen is reduced to hydroxyls that are counterbalanced with the sodium ions from the electrolyte.

For this mechanism, there are several ways that a water-based coating might contribute to corrosion resistance. If the total amount of free hydrophilic species in a coating – from both the polymer and the coating formulation itself – can be kept low, then the number and size of the hydrophilic pockets that grow to form the conductive pathways can also be kept low. In the coating formulation, this is done with the use of hydrophobic dispersants and thickeners. Polymer design can also help minimize formation of hydrophilic pockets. If the surfactant level is reduced, and stabilizing acid functional monomers or polymerizable surfactants are attached to the outside of the polymer particles then there is less migration to the hydrophilic pockets formed as the film dries. In addition, acid-functional monomer and phosphate-functional polymerizable surfactants can significantly improve adhesion to the metal. Theoretically, improved adhesion can resist the osmotic forces pulling the coating from the surface, however if too much acid or phosphate surfactant is used, the coating is more hydrophilic and it can have worse corrosion.

One way to make the high acid polymers less hydrophilic while maintaining good adhesion is to use a hydrophobic monomer like styrene in the polymerization. In order to improve corrosion resistance, a relatively high level of styrene must be used, however, and at that level, the styrene can detract from the exterior durability. For these reasons, the balance of very good corrosion resistance, good QUV gloss retention and very good adhesion is hard to achieve for water-based DTM paints.

A novel hybrid styrene acrylic, RayKote™ 2020, which is polymerized with a low level of hydrophobic resin, has been developed to improve the adhesion and corrosion properties of DTM coatings. The level of acid-functional monomer used was chosen to give very good stability and adhesion. The stabilizing surfactant was a combination of phosphate reactive and conventional surfactants, but the total surfactant level was reduced to the minimum level that gave good polymer stability. Because of the hydrophobicity of the resin used to form the hybrid, the level of styrene used in the polymer could be kept low to maintain exterior durability.

In order to test if the improved corrosion resistance was a result of improved adhesion, an analogue of the hybrid styrene acrylic was prepared without the hydrophobic resin (Variant 1). Formula 1, a gloss DTM paint at 39% volume solids, 15.5% PVC and <100 g/L VOC, was prepared (Table 1). This paint was made with a hydrophobic dispersant and HEUR thickener. 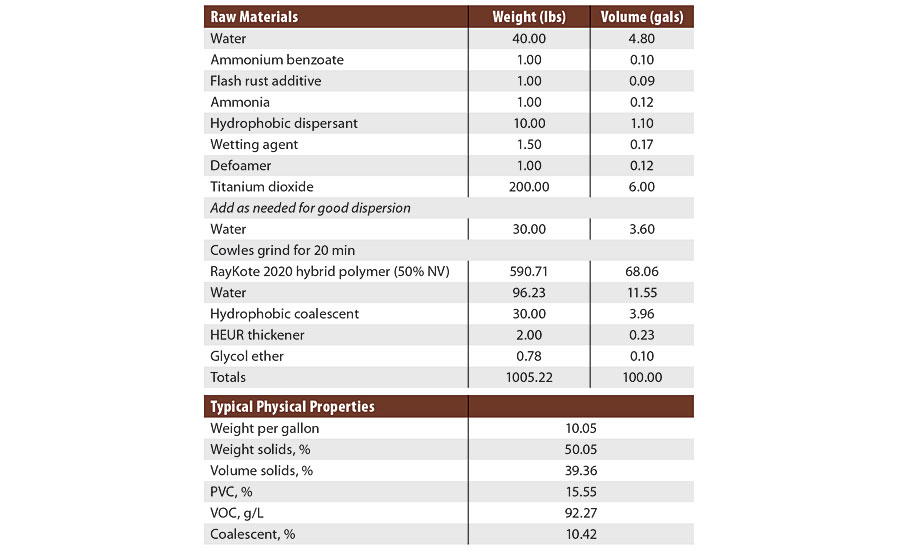 QUV-A resistance was tested following ASTM G154-06 Cycle 1 in a Q-Panel QUV Accelerated Weathering Tester. Paints were drawn down on treated aluminum Q-panels using a 5 mil path depth applicator blade and aged for one week. Panels were exposed to 300 hrs of accelerated weathering with QUV-A 340 bulbs and cycling 8 hrs of light followed by 4 hrs of dark and condensation. The initial and final 60° gloss of the panel was measured using a Rhopoint Novogloss glossmeter. 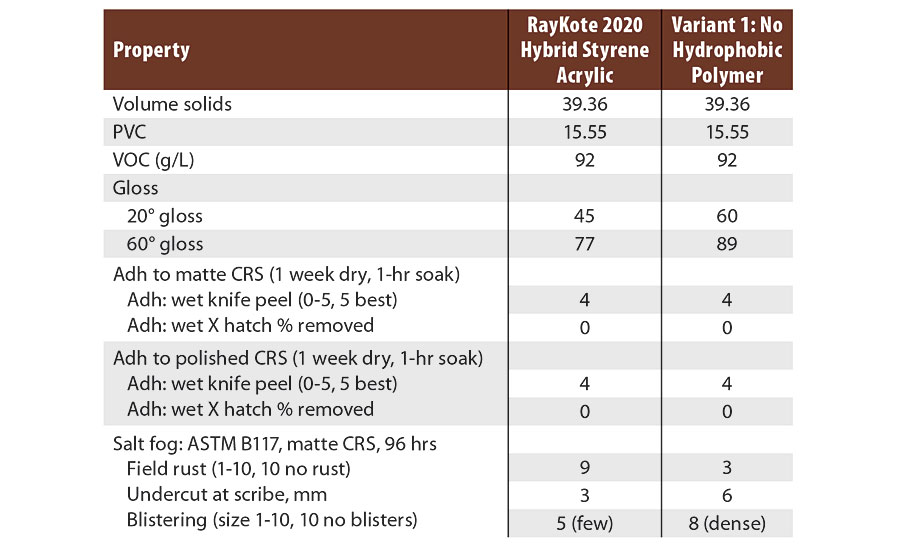 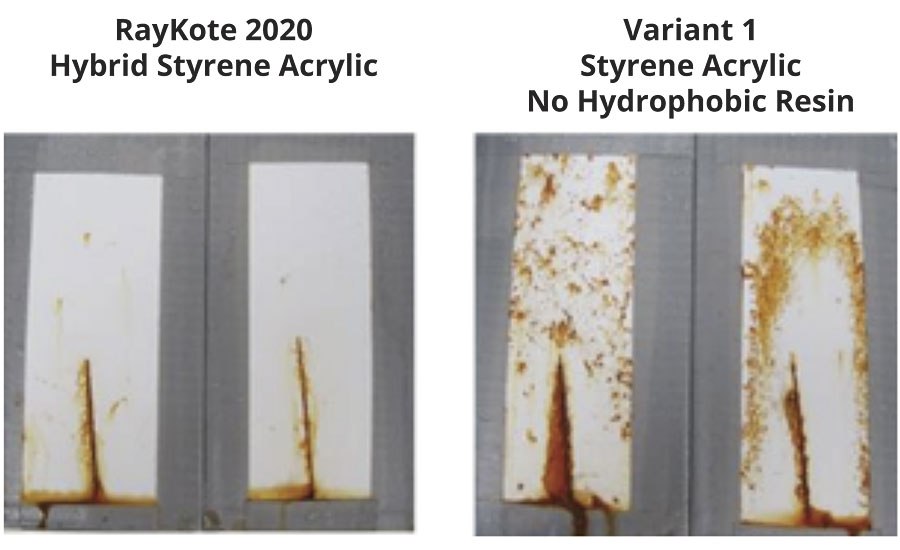 Water uptake of a film can be tracked over time using electrochemical impedance testing because water changes the dielectric properties of the film. The water uptake changes the coating capacitance, which increases with time until the film becomes fully saturated with water and the capacitance levels off.6 The paint based on hybrid styrene acrylic had significantly higher impedance than the variant without the hydrophobic polymer (Figure 3). The higher impedance of the hybrid styrene acrylic compared to Variant 1 polymer may indicate that the hydrophobic resin in the hybrid polymer is improving corrosion by reducing the number of conductive pathways through the film. 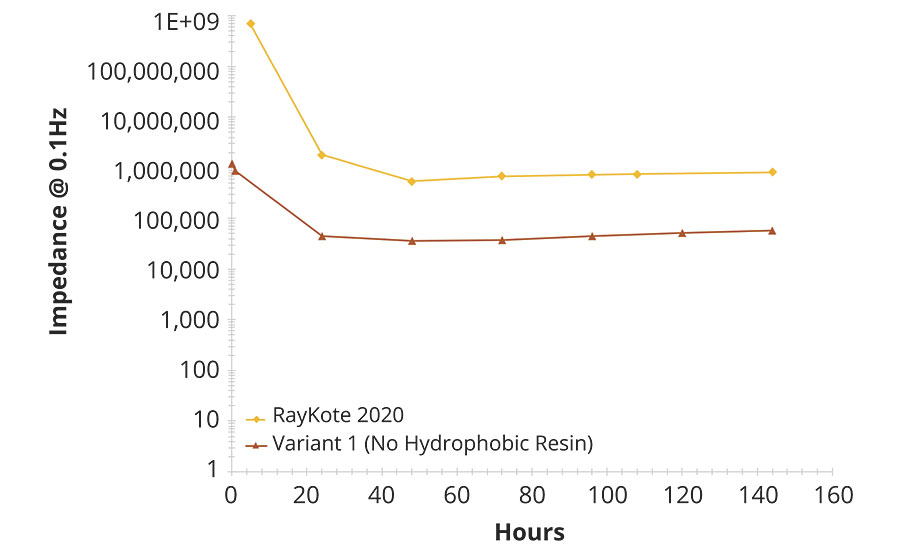 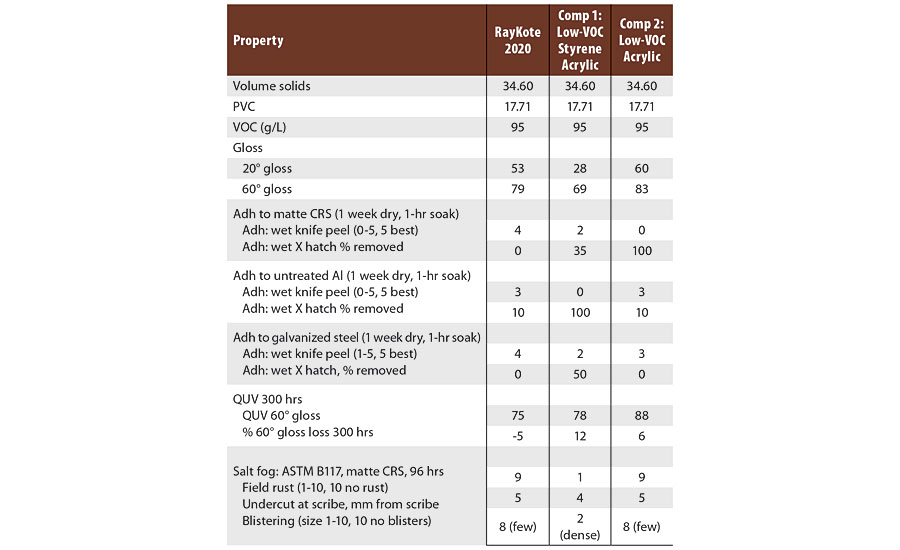 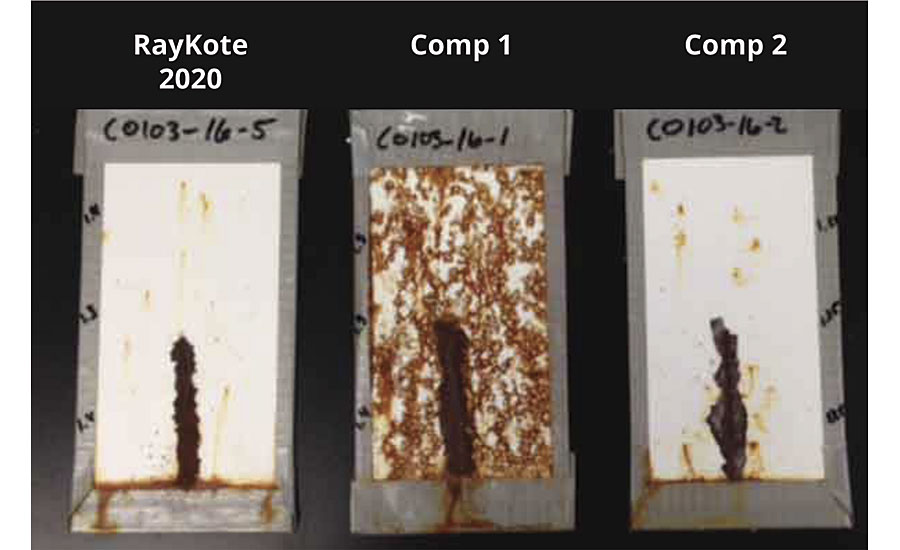 The hybrid polymer was also found to have an improved balance of properties compared to two commercial low-VOC emulsion polymers designed for the DTM market. The improved adhesion, good corrosion resistance and good QUV gloss retention show that the hydrophobic resin in the hybrid polymer can be used to reduce the effects of high acid on corrosion and of styrene on QUV gloss retention.