Wine, Whisky and Coffee and their Role in Additive Selection for Coatings

The benefits to the formulator of wine, whisky and coffee are well known – coffee to help waken the formulator at the start of the day and wine or whisky to celebrate or commiserate over the day’s results. However, the tears of wine and the coffee stain effect (Figure 1) are well known examples of the Marangoni effect,1 an important physical phenomenon also seen in paints and coatings that is often related to similar phenomena, often with undesirable consequences. Both are examples of liquid flow induced by surface tension forces. 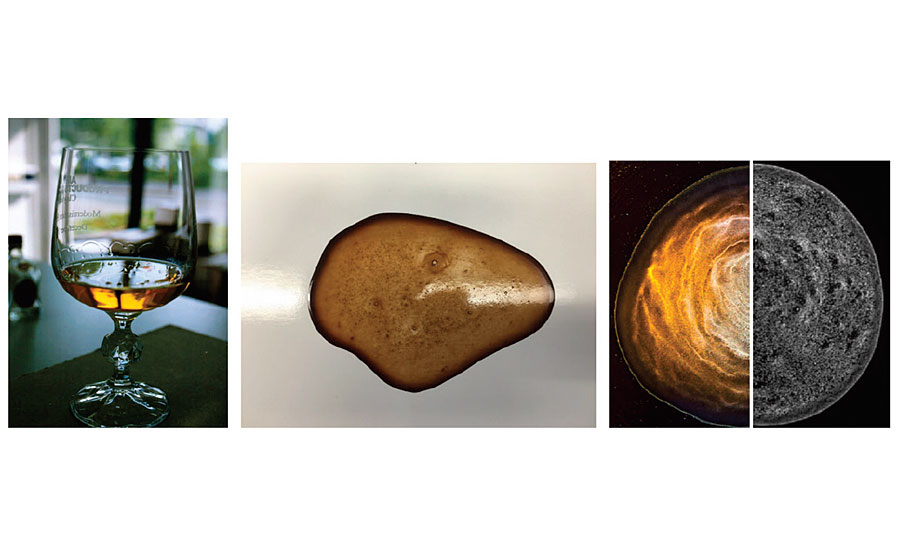 The tears of wine are caused by the evaporation of water and ethanol from the surface of the wine and then followed by condensation on the side of the glass. However, as alcohol has a higher vapor pressure than water, more water condenses on the glass, leading to a water-rich condensate, while the surface of the wine is more alcohol rich. When the condensate flows down the sides of the glass back to the wine surface, an unusual flow pattern is observed where the liquid wine flows up a short distance of the glass before gravity pulls it back down, leading to thicker drops (the tears) bouncing up the glass edge. This is due to the attractive forces (surface tension) within the water-rich droplets being stronger than those present in the alcohol-rich surface, causing the liquid to be pulled towards the droplets. This effect was first explained by the physicist James Thomson and then studied in greater depth by Carlo Giuseppe Matteo Marangoni (1840-1925) as part of his Doctoral Thesis at the University of Pavia in Italy. The effect has since been studied in much greater detail and continues to inspire research to this day.

The coffee stain effect, the formation of a thicker, more intensely colored ring around the edge of a spilled liquid mixture, is another example of flow patterns created by surface tension forces.3 When a liquid mixture evaporates from a surface, surface tension forces create flow patterns that circulate the more volatile component to the surface, allowing the contact line to contract as the liquid volume decreases (Figure 2). However, if the liquid interacts with the substrate, the contraction can be constrained and slowed. If solid particles, such as coffee grinds, are caught in the flow, they will be pushed to the edge and then deposited, as there is insufficient volume to bring them back to the droplet. This creates the thick edge that can be clearly visible if the particles are colored. This effect also continues to be studied extensively and, recently, researchers from Princeton noticed that the edge effect did not occur when whisky dried in a clean glass.2 They were also able to reproduce this phenomenon using select combinations of surfactants, soluble polymers and solvent blends, citing potential uses in coatings. 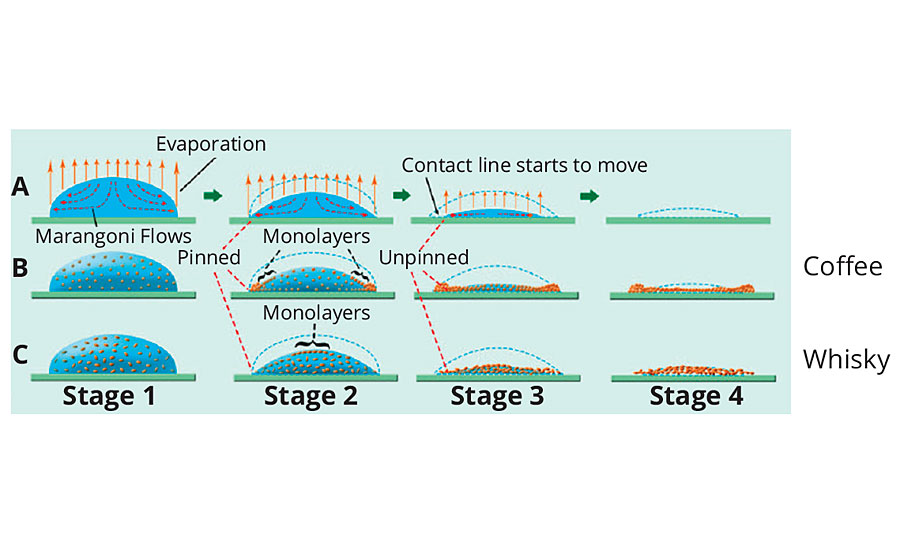 The force created by surface tension differences can also be demonstrated using the simple soap boat experiment, where a small boat can be propelled by the addition of a small drop of surfactant (or defoamer) into a notch at the back of the boat. The effect is especially visible if the surfactant is colored or an emulsion defoamer is used. However, the same experiment can also be used to show how other factors can affect the flow. When the experiment is repeated with a larger boat (greater mass), the movement is much reduced, as more force is needed to propel a heavier object. Similarly, if the water is replaced with honey (or a water thickened with a cellulosic thickener), the boat barely moves, as viscous drag prevents the movement. It can thus be seen that, while the flow caused by surface tension differences can be significant, it is also affected by other properties of the liquid.

Surface tension forces are linked to many known problems in coatings, such as poor substrate wetting, craters, fisheyes, orange peel and leveling patterns, edge retraction and picture framing, and poor recoatability.4 Surfactants and surface active materials are often used to control and prevent these defects by minimizing the differences in surface tension that lead to the flow. Surface tension-driven flow is also an important mechanism in foam control, as defoamers also contain low surface tension, insoluble liquids that spread across a bubble lamella leading to bubble destabilization.5 Formulation properties that affect liquid flow will also affect surface tension-driven flow and will, therefore, affect the behavior of additives in different formulations.

To demonstrate these effects, a very simple paint formulation was prepared using a water-based polyurethane acrylic hybrid resin dispersion, formulated with the appropriate premix of coalescing co-solvents and adjusted to various solids content with a commercial titanium dioxide slurry (Table 1). The paint was tested at 0%, 15% and 30% PVC to demonstrate the effect of density and film solids, and the 15% PVC samples were also tested either with or without thickener (0.4% of a commercial HEUR type thickener). Each formulation was tested with different defoamers or surfactants. The viscosity of the formulation without thickener was about 100 centistokes and 400 centistokes with the thickener; without surfactant, the surface tension of the formulation was 52 mN/m. 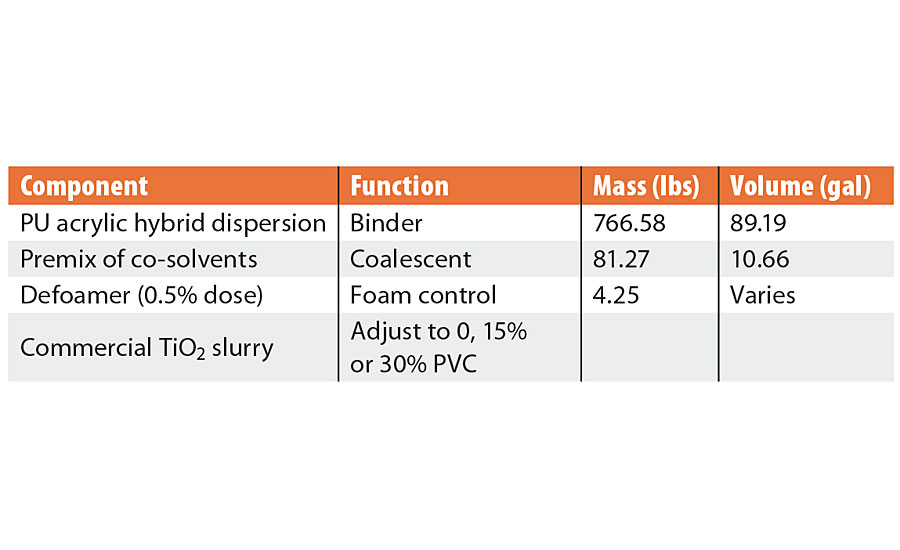 The first tests examined the effect on four different defoamers – a strong siloxane defoamer, a mid-range oil defoamer, a more compatible siloxane defoamer and a molecular defoamer. Figure 3 shows the results of a simple foam test where the density of the formulation samples was measured before and after 30 seconds shearing in a Waring blender. The foam data is reported as normalized density (sheared density/initial density) as the higher filled samples had a higher initial density. All the defoamers were effective at reducing the amount of air incorporated in the samples, as expected, and the siloxane defoamers were the most effective. The samples containing thickener had higher densities (lower air content) than the samples without thickener, but these were foamier when applied by brush, suggesting that it is harder to both incorporate and release air from the higher-viscosity formulation. Generally, the higher-PVC formulations gave lower densities (higher air content) than the lower-PVC formulation with all four defoamers tested. The most effective defoamer was the more compatible siloxane, except in the case of the thickened paint. 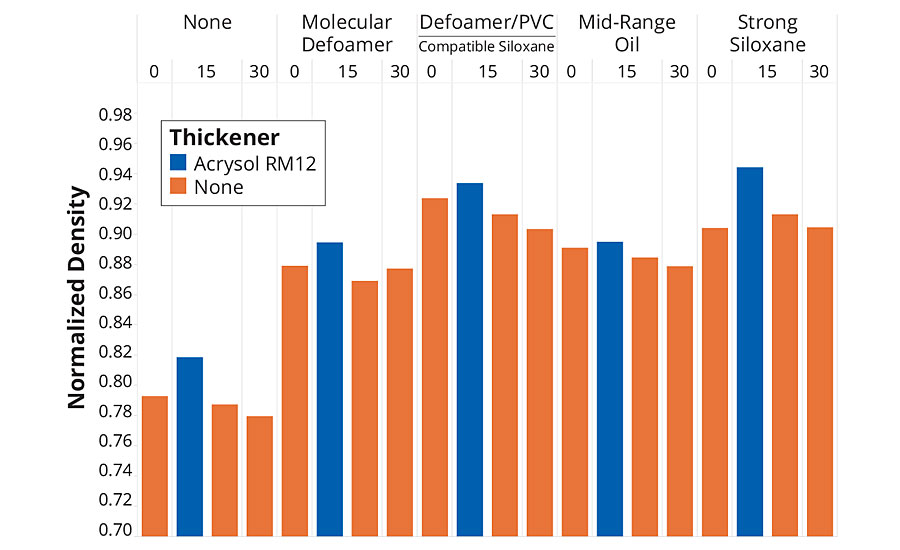 FIGURE 3 » Defoaming performance as a function of formulation PVC and thickener.

The same formulations were then applied by drawdown and brush onto a number of different substrates, including Leneta charts, wood and plastic (Sabic Cycoloy), and the dried films examined for surface defects. An example of the results is shown in Figure 4. The formulation without defoamer had no defects, but foam was visibly present in the applied film, while there was little or no foam present in any of the paints that contained defoamers. The number and size of surface defects decreased with increasing PVC and viscosity, all three of the oil-type defoamers on all the substrates tested. This trend was amplified on the plastic substrate (impermeable, lowest surface energy) and was reduced on the easier-to-wet Leneta charts. 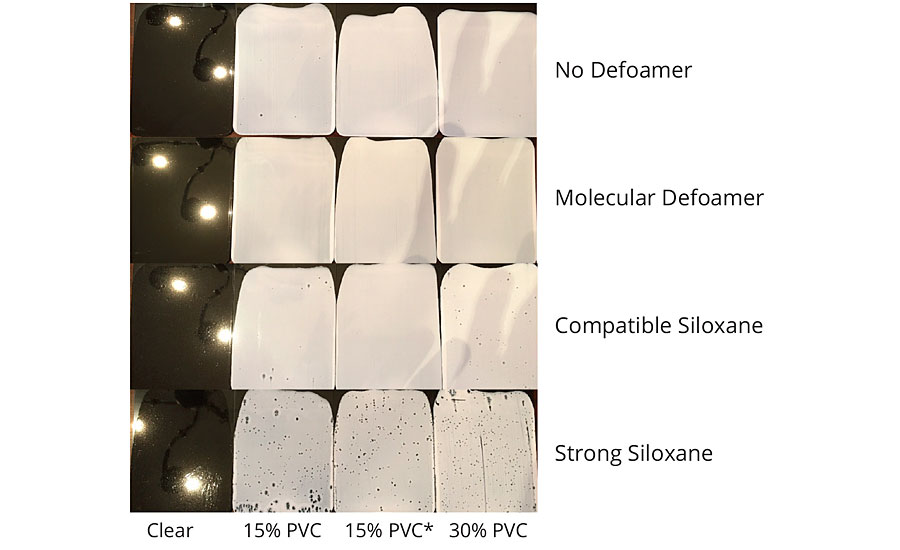 The effects of formulation viscosity, coating density and substrate on defoamer performance have been seen in other studies,6 and these phenomena have been shown to be related to the formulation’s ability to flow under surface tension forces. The more compatible (less hydrophobic) siloxane defoamer gave good performance in most of the formulations tested, but it was not always the best overall performer in a given formulation/substrate combination. The molecular defoamer gave the best results in the clearcoat applied on wood, whereas the oil defoamer was best in the 30% PVC formulation on the same substrate. 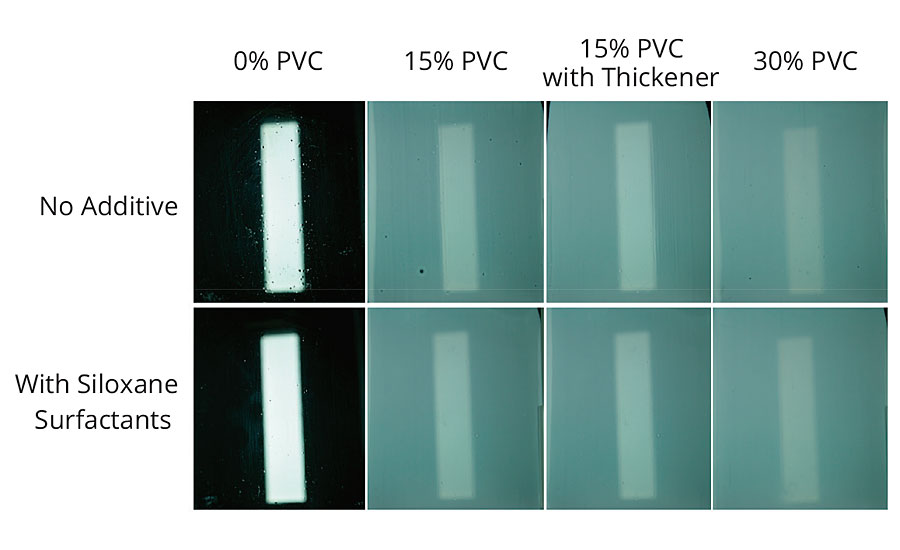 Surface tension-driven flow is a real force, created by localized differences in liquid and substrate surface tensions, that can create many undesirable effects for the paint and coating formulator. However, this flow is also subject to resistance from coating mass, film weight and viscosity that can prevent or restrict flow. Additives are often used to try to eliminate problems caused by surface tension-driven flow, but they are often used as problem solvers once other formulation properties are fixed. Thus, additive selection can be challenging because additives will behave differently as other formulation properties change. A highly effective defoamer for highly filled paints may cause surface defects as the formulation viscosity changes for different applications, while a more compatible defoamer loses effectiveness in more highly filled coatings. Similarly, more specialized surfactants such as siloxanes, acetylenic diols or fluorosurfactants are often needed for more difficult-to-wet substrates, while simpler surfactants may be perfectly adequate for less-demanding substrates. By understanding how additive performance can be affected by formulation change, formulators can identify potential problems and work with their suppliers to find answers faster.

The author wishes to thank Renae Bennett for help with the pictures and videos, Paul Marcella for helping to create the data, and Ingrid Meier and Shauna McAuliffe for editorial assistance. The author also wishes to acknowledge Donald Liles and Gun Kim for inspiration. This paper was produced with the help of 3 Corações coffee, Cloudy Bay Sauvignon Blanc and Isle of Jura malt whisky.