This website requires certain cookies to work and uses other cookies to help you have the best experience. By visiting this website, certain cookies have already been set, which you may delete and block. By closing this message or continuing to use our site, you agree to the use of cookies. Visit our updated privacy and cookie policy to learn more.
Home » Low-Viscosity Oligomers for 100%-Solids UV-Curable Soft-Touch Coatings
Paint and Coating Resins & PolymersSpecial Purpose CoatingsUV CoatingsEU TodayArticles From Europe

Soft-touch or soft-feel coatings are employed to create a variety of haptic effects on plastic, paper and metal substrates. Haptic effects can impact a consumer’s perceived value of a product, and influence them to buy it over other similar products. In fact, a recent study by California Polytechnic State University showed not only did customers prefer cosmetics packaged in a container with a soft-touch coating versus a traditional coating, they were willing to pay a 5% price premium.1 Thus it is no wonder interest in soft-touch coatings has increased in recent years. While the study by California Polytechnic State University focused on cosmetic packaging, soft-touch coatings span a variety of markets including automotive interiors, small electronics and appliances.

With the broad range of markets comes the need for a broad range of feel types. In general, a feel type is described in terms of things known to be soft: rubber, velvet, peach skin, rose petals, silk, leather, suede, etc. Not only are these terms highly subjective, the perceived feel varies from person to person. A coating that one observer might describe as velvety, another may find silky. Studies have shown that factors such as age2 and sex3 affect how feel is perceived. In a previous lab study we chose observers of varying age, sex and training to evaluate a series of developmental soft-touch coatings.4 Although most could recognize a soft coating, their perceptions of which was the most pleasing varied widely. While we found that atomic force microscopy (AFM) measurements could be used to distinguish between feel types of coatings with different chemistries,4 additional testing showed that as the chemistry became more similar, the relationship between the AFM adhesion force and feel no longer held. In addition, AFM cannot distinguish the quality of the feel. Thus, for our subsequent studies we used trained observers who could distinguish both feel type and quality to judge the coatings’ haptic performance.

Since consumer products are exposed to repeated wear and contaminants throughout their life cycle, soft-touch coatings present the challenge of balancing soft feel with durability. Wear resistance for soft-touch coatings is typically created by crosslinking multifunctional isocyanates with polyols. This reaction creates hard regions from the isocyanates distributed in softer regions created by the polyols, as illustrated in the idealized structure in Figure 1. While these systems have excellent feel properties, two-part urethane coatings have disadvantages such as pot life limitations, long cure times and hazards of isocyanate handling. To address these issues and improve durability, formulators and product designers look increasingly toward UV-cured soft-touch coatings. 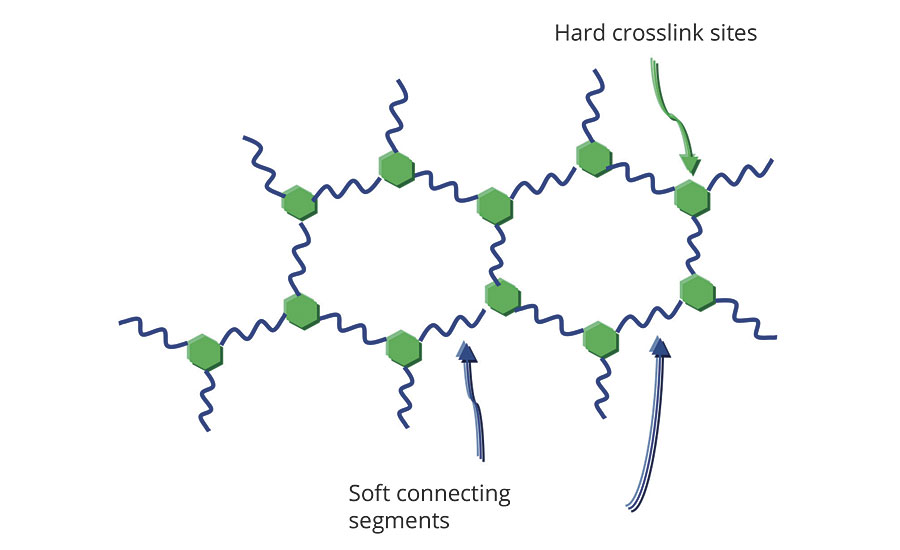 In a previous study, inspired by two-part isocyanate systems, we demonstrated our ability to create a UV-curable soft-touch coating with good feel and improved mar, abrasion, stain and chemical resistance compared to conventional (non-UV) two-part urethane coatings.5 The system created had a silky feel. Achieving soft-touch coatings of various feel types was necessary to fit the requirements of a wide range of applications and products. An array of feel types was achieved using newly designed urethane acrylates and crosslinkers. These new materials for UV-curable soft-touch coatings deliver high-quality feel while improving coating properties compared to the standard two-part urethane coating.6 These first-generation products are relatively high in viscosity and require use of solvents or high levels of UV-curable monomer reactive diluents for application.

Table 1 shows a base soft-touch coating formulation utilizing a low-viscosity soft-touch oligomer. Table 2 outlines a similar formulation with a different, multicomponent photoinitiator (PI) system. Silica was added as both a surface additive to impart soft feel and as a matting agent. While many commercial soft-touch coatings use polymeric particulate additives to enhance the feel effects, we did not include them in our studies to highlight the performance of the oligomers themselves. 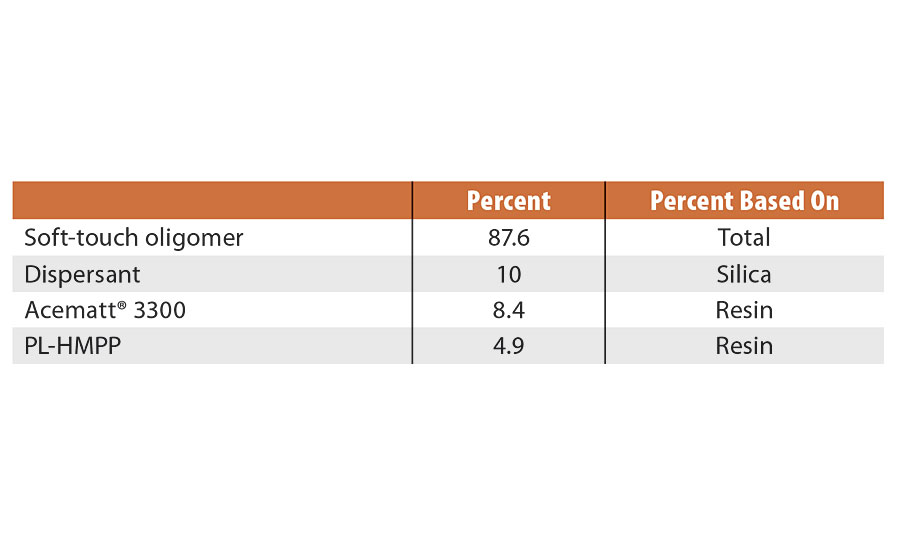 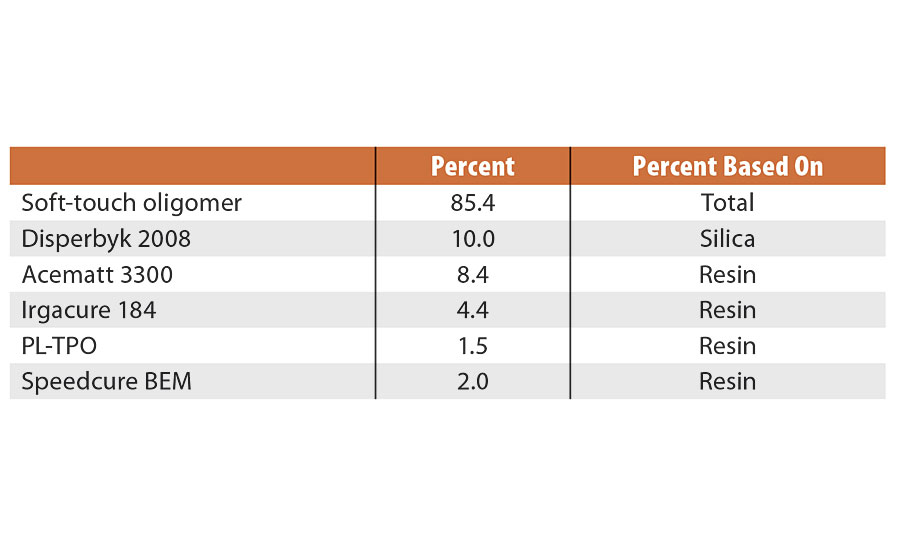 Coated panels were cured with a gallium additive lamp (V lamp) and mercury lamp (H lamp) both at 600 W/in at a belt speed of 50 fpm, resulting in a final film thickness of 3.5 mils. The panels were allowed to stand overnight before testing for abrasion resistance, solvent resistance, food stain resistance and pencil hardness (Table 4). 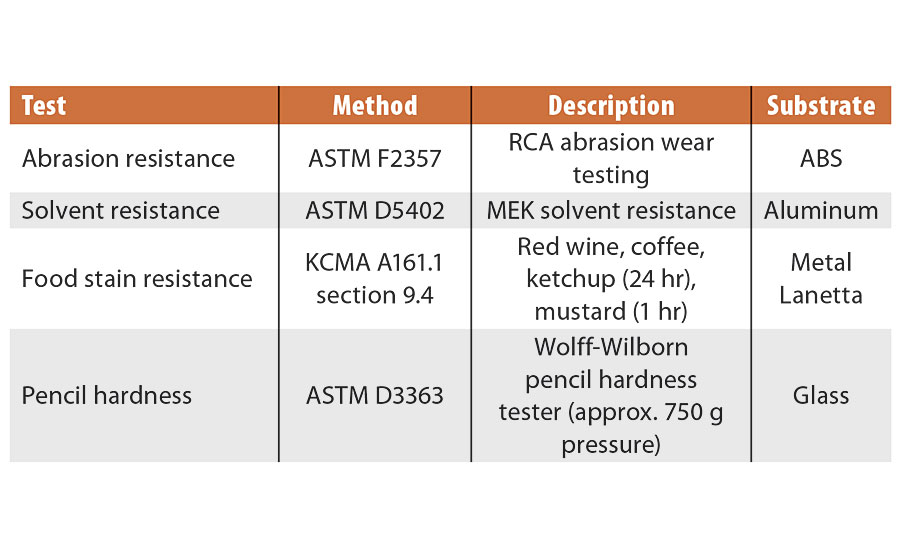 Experienced observers rated the feel of the panels by type and quality. We divided the range of observed feel into three regions: rubbery, velvety and silky. Rubbery describes a coating close to rubber, which has more grip (less slip) than a silky (silk-like feel) coating. A velvety coating has a slip/grip feel between that of rubbery and silky. The observers also rated the quality of the soft touch on a scale of 1 to 5, with 1 being a poor match and 5 being an exact match to the targeted feel control panel.

In both the two-part urethane and waterborne conventional soft-touch systems, the solvent and water respectively are expelled from the system during drying. This aids the migration of matting agents such as silica, or other fillers, to the coating’s surface (Figure 2). Evaporation of the solvent or water increases shrinkage, causing the silica to rise to the surface and provide a soft-touch, matte finish. Additionally, solvent and water decrease formulation viscosity, further increasing silica migration and coatability. 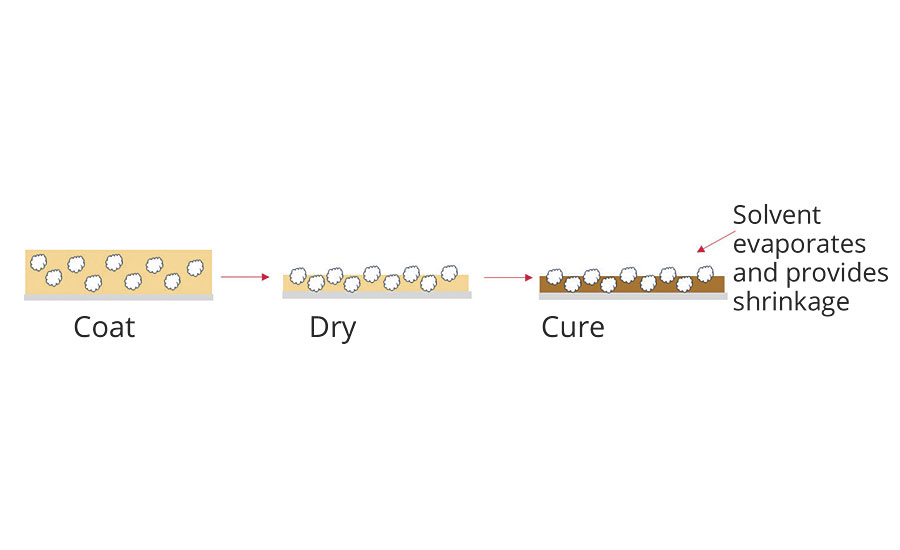 We previously utilized this method of shrinkage and viscosity reduction in UV-curable, solvent-based soft-touch systems to obtain the necessary matting and feel with increased durability.4,6 While these UV-curable systems are an improvement over conventional soft touch, the use of solvent or water requires a drying step. In addition, certain solvents have negative environmental and worker exposure concerns that formulators want to avoid. These issues demonstrate a need for low-viscosity, 100%-solids soft-touch formulations.

To develop a workable 100%-solids system, a large number of existing and developmental low-viscosity oligomers were screened for feel and physical properties. The new oligomer CN6510 provided the best combination of feel and physical properties of all initial materials tested. This product’s low viscosity facilitates the mobility of silica to produce soft feel and matting. However, it was noticed that a significant amount of time between coating and curing was necessary to achieve this migration. This process time was decreased by heating the wet coating prior to curing to further lower the viscosity and swell the silica, allowing it to float to the surface faster (Figure 3). To eliminate the need for a bake step, a longer-wavelength gallium additive lamp (V lamp) was used in line with a mercury lamp (H lamp), facilitating silica migration immediately after application of the coating. This technique was verified with different photoinitiator packages to consistently provide low-gloss soft-touch coatings (Table 5). 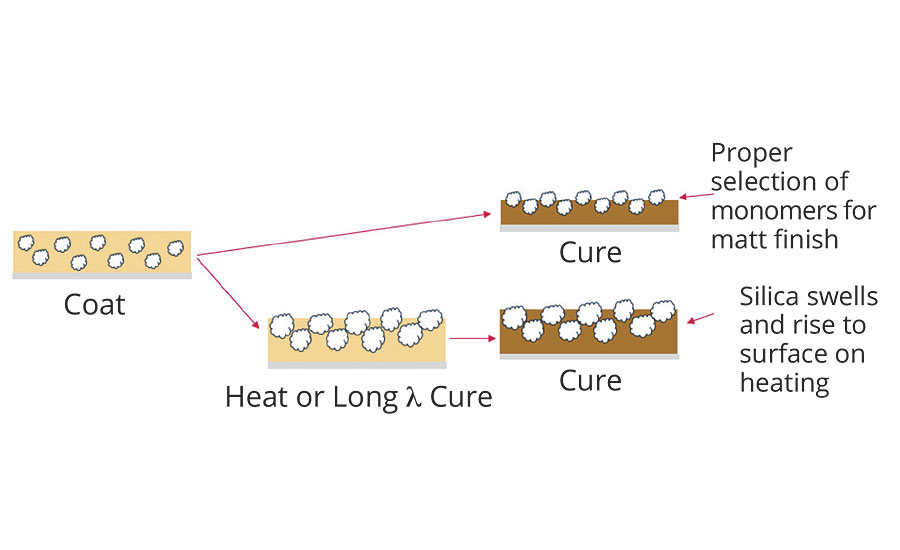 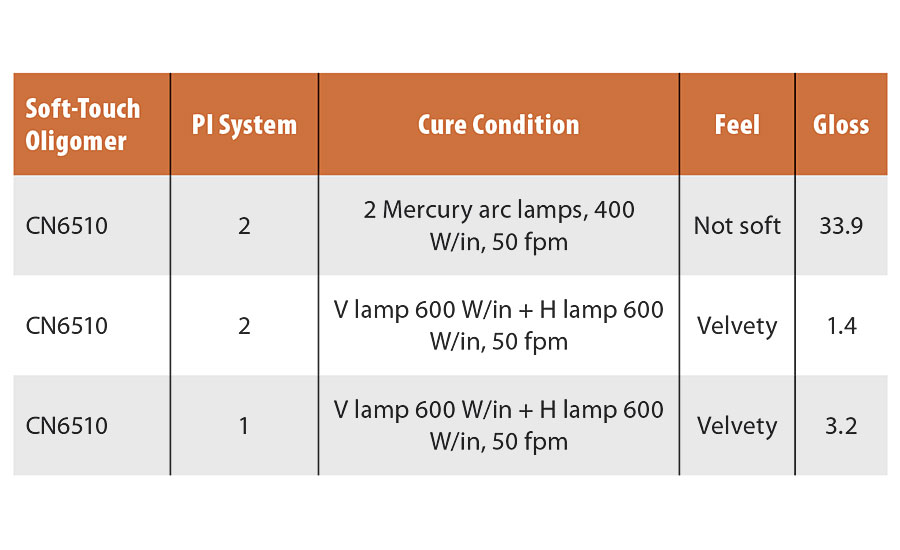 Based on the results obtained with CN6510, three additional low-viscosity oligomers were developed. These products can be used to achieve a variety of feel effects and enhanced physical properties (Table 6). 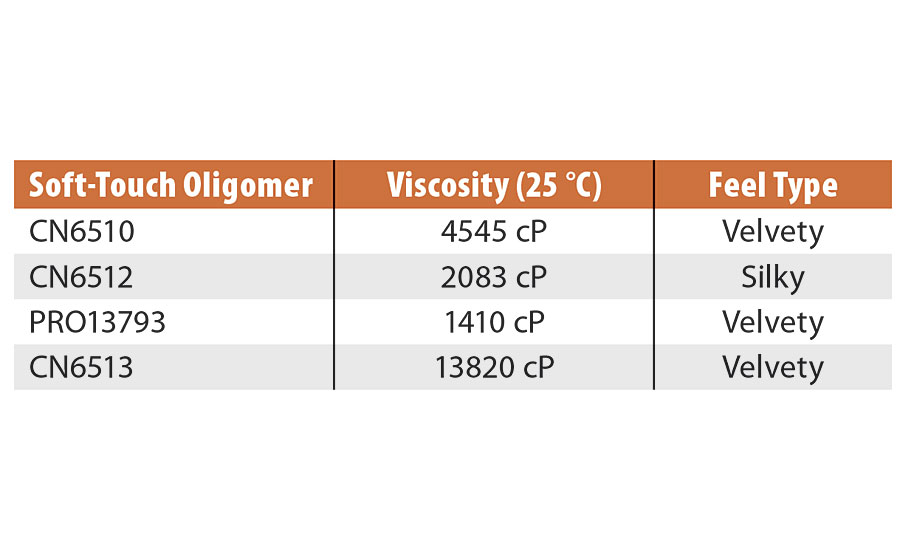 The new soft-touch oligomers were formulated (Tables 2 and 3) and tested for feel, hardness, stain resistance, solvent resistance and abrasion resistance as described in Table 4. Appropriate formulation of each low-viscosity oligomer yielded good haptic properties in the velvety and silky space. These coatings not only exhibit low gloss and good feel, but also increased physical properties over the two-part urethane and waterborne controls, as shown in Figures 4 and 5. As is typically the case, each soft-touch oligomer offers its own unique advantages and trade-offs. CN6512 provides a harder, silky type of feel, and offers the best stain and solvent resistance of the group. These properties are more difficult to achieve for a velvety-feel coating. PRO13793 produces a velvety coating with maintained hardness and heightened abrasion resistance while being slightly more susceptible to staining than CN6512. Coatings based on CN6513 offer the best haptic properties and remain more durable than the control, with excellent abrasion resistance. Blending the oligomers together in varying ratios offers further opportunities for tailoring the feel and physical properties as needed for specific end uses. 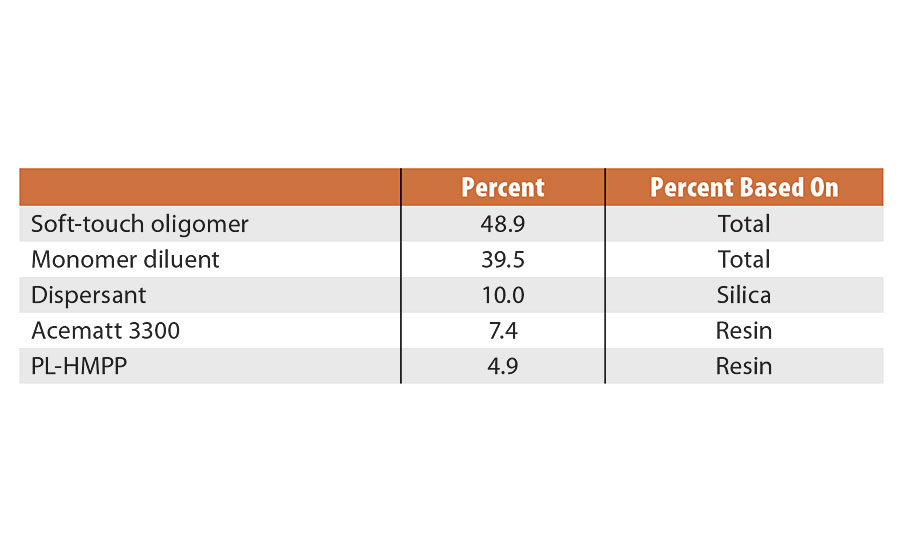 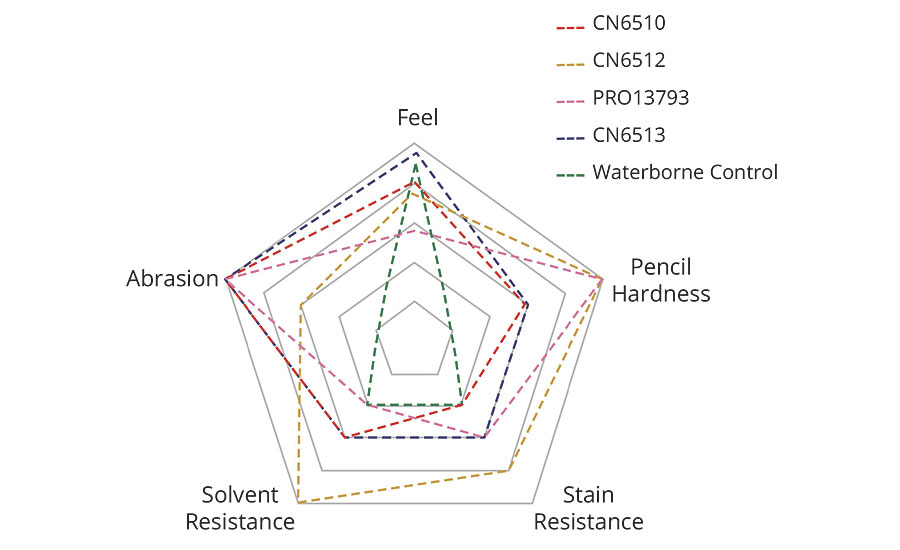 While it has superior feel quality, CN6510 is somewhat lacking in durability. Through an optimization process, the new oligomer CN6511 was developed. CN6511 has increased pencil hardness, solvent and stain resistance with even a slight feel advantage over the original CN6510 (Figure 5). 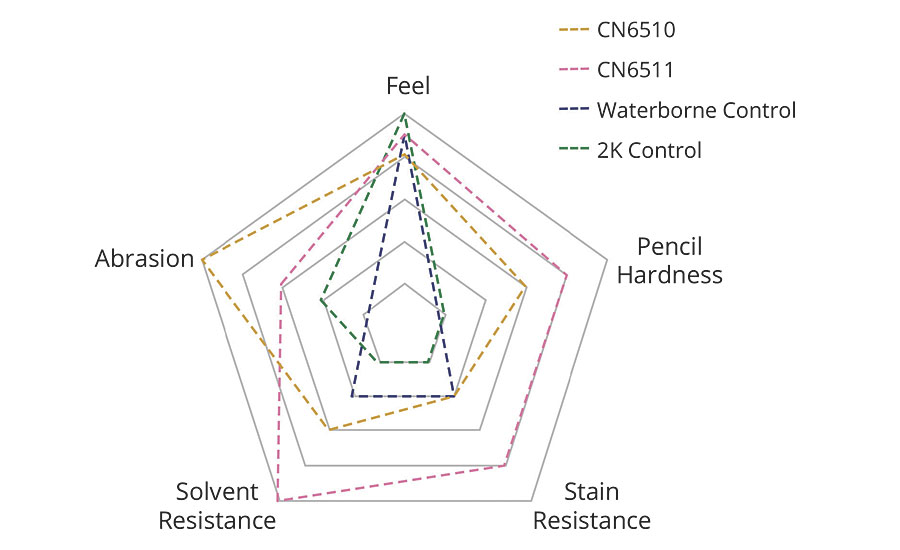 Newly designed low-viscosity oligomers allow the formulation of UV-curable soft-touch coatings without the need for solvent or water diluents. These low-viscosity oligomers yield soft-touch coatings with improved durability over traditional two-part urethane and one-part waterborne systems. In addition to the effects from the base oligomers and formulations, tuning of the UV-curing process can further enhance the soft-touch effects of the coatings. The 100%-solids UV-curable systems also offer infinite pot life, short cure times and decreased health hazards to formulators and convertors.

1,5-Pentanediol Diacrylate: A Bio-Based Alternative for UV-Curable Coatings and Inks