Temporary corrosion protection of metal components and surfaces during shipment, storage and/or in between manufacturing processes is critical to a variety of industries worldwide. A common example of this is automotive components, which may require temporary corrosion protection for a few days, weeks or months. Rust-preventative liquids are regularly used to accomplish this task.

When choosing a temporary rust-preventative product, multiple considerations must be made. In addition to effective corrosion protection, the product should provide little to no interference with the function of the metal part or surface, and should also be safe and friendly to the environment and the workers using it. Finally, ease of removal needs to be considered. Traditionally, oil- and solvent-based products have been used for the preservation of metals during shipment, storage or between processes. While these products may offer sufficient corrosion protection, they often contain hazardous ingredients and are not readily biodegradable.1,2 As environmental and disposal regulations become more and more stringent, the desire for “green” corrosion inhibitors is increasing.3 Recently, the use of biobased products, derived from vegetable oils and their esters, has been found to offer equal or better corrosion protection properties, when compared to their petroleum-derived counterparts.2

Different approaches can be used to create an environmentally friendly rust preventative system. The most common method is to replace solvent- or oil-based carriers in formulations with water-based technology. The second option is to replace petroleum-based carriers with solvents manufactured from environmentally friendly renewable resources. This has been accomplished by combining vapor corrosion inhibitors (VCIs) with soy-derived and canola oils, creating anticorrosion product formulations for many different applications. The last method is to utilize biodegradable VCI chemistry building blocks in conventional solvent carriers.2

This article will focus on the first approach. Laboratory test results, as well as economic and environmental impact of traditional rust preventatives, will be compared to a novel water/biobased product. The goal of this research is to show that biobased products may inhibit corrosion as well as their traditional oil- and solvent-based counterparts, without any of the negative environmental considerations.

In 2015 an estimated 300,000 tons of rust-preventative fluids were used around the world - comprising approximately 12% of the total market for metalworking fluids. Asia uses about half of the world’s supply of rust preventatives, driven in a large part by the enormous metal parts exporting industry in China. The remainder of the market is split about evenly between the Americas and Europe. European markets, where environmental regulations can be more stringent, use a higher percentage (about 40%) of water-based rust preventatives. Asian markets use solvent-based or oil-based protective fluids almost exclusively. These fluids also dominate in American markets, representing about 80% of market share.8 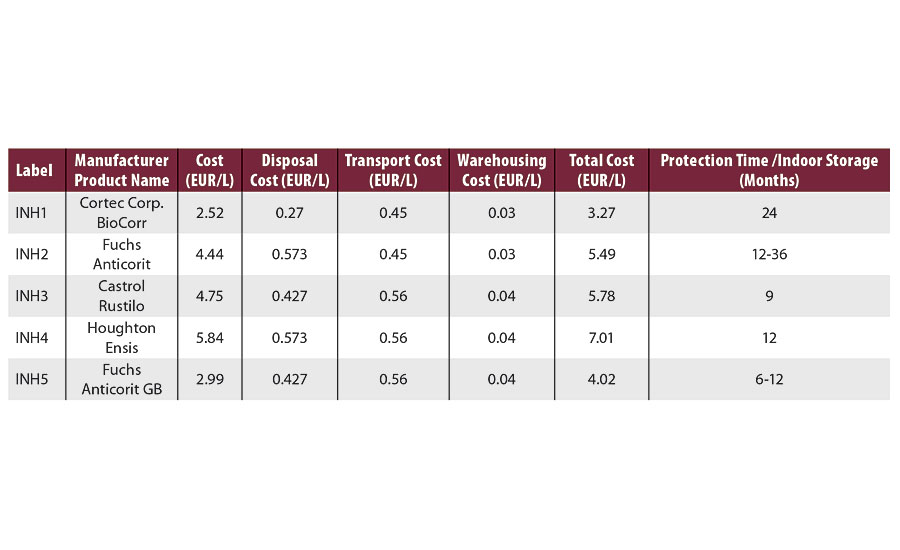 The cost analysis is performed according to:

In the experimental study, a series of analyses were conducted to evaluate both biobased and petroleum-based rust preventatives. The first experimental analysis was accelerated corrosion testing using a humidity chamber, in an effort to simulate conditions experienced during transport and shipping. Second, each rust preventative was evaluated for cleanability. Easy removal ensures treated metal components can be quickly used, minimizing downtime and maximizing production output. The last analysis was electrochemical testing by means of polarization techniques, which determines efficiency of corrosion inhibition.

Five types of ready-to-use rust preventatives were evaluated: one biobased that combines film-forming additives with vapor phase corrosion inhibitors (VpCI) and four conventional solvent- and oil-based products, which leave a temporary waxy protective film on metal surfaces. The properties of tested rust preventatives are given in Table 2. 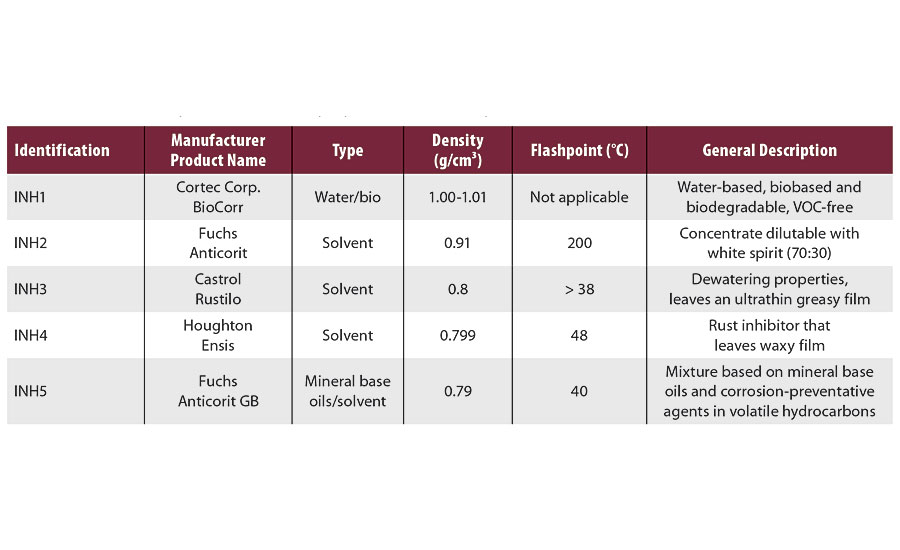 The carbon steel samples, dimensions 60x100x1 mm, were polished with sandpaper (240 grit), immersed in methanol for 5 min, dipped in rust preventatives for 30 min, and then allowed to air dry for 24 hrs before testing. 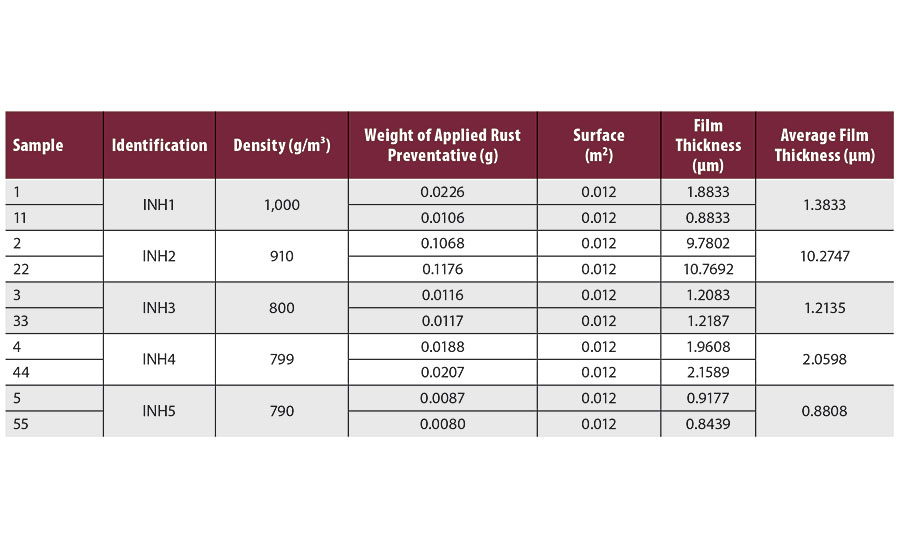 An electrochemical study of rust preventatives was conducted according to ASTM G-94. Treated samples were immersed in fresh water, for 1 hr and 5 days, respectively, at (23±2) °C. Measurements were carried out in a standard three electrode test cell in relation to the reference saturated calomel electrode (SCE) with known interaction potential of +0,242 V versus standard hydrogen electrode (SHE). Polarization curves were registered after 30 min of exposure to aqueous solution, in order to allow corrosion potential (Ecorr) stabilization. During the potentiodynamic measurements, the working electrode was polarized to the potential of ± 250 mV relative to the corrosion potential and the current response was measured. The inhibitor efficiency was calculated from measured corrosion rate of unprotected and protected carbon steel samples.

During and after 600 hrs of humidity chamber testing, the treated panels were evaluated for pass/fail in accordance to ASTM D 1748. The standard states that a test surface shall pass if it contains no more than three dots of corrosion, no one of which is larger than 1 mm in diameter, whereas, a test surface shall fail if it contains one or more dots of rust larger than 1 mm in diameter or if it contains four or more dots of any size. Corrosion occurring within 1/8” from the sides of the panel, or within 1/8” below the hanging holes is not counted. The humidity testing result are given in Figure 1. 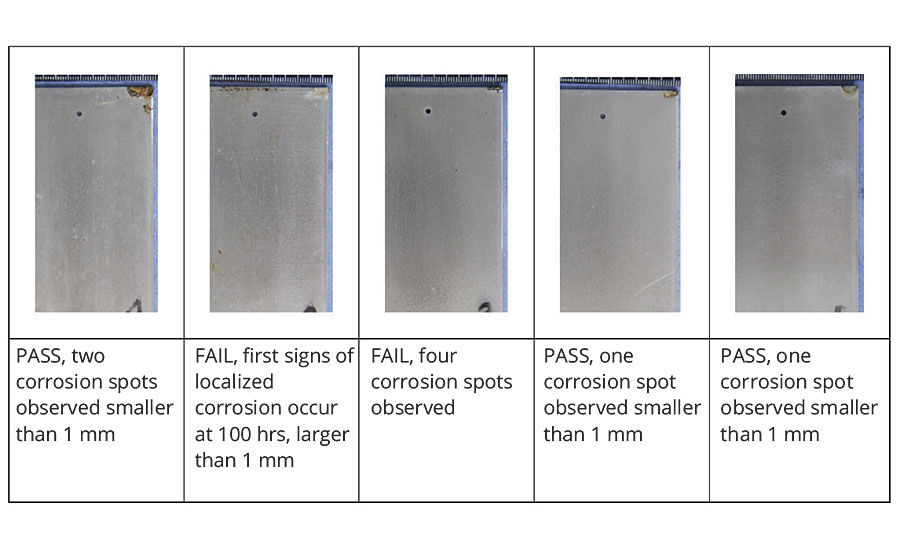 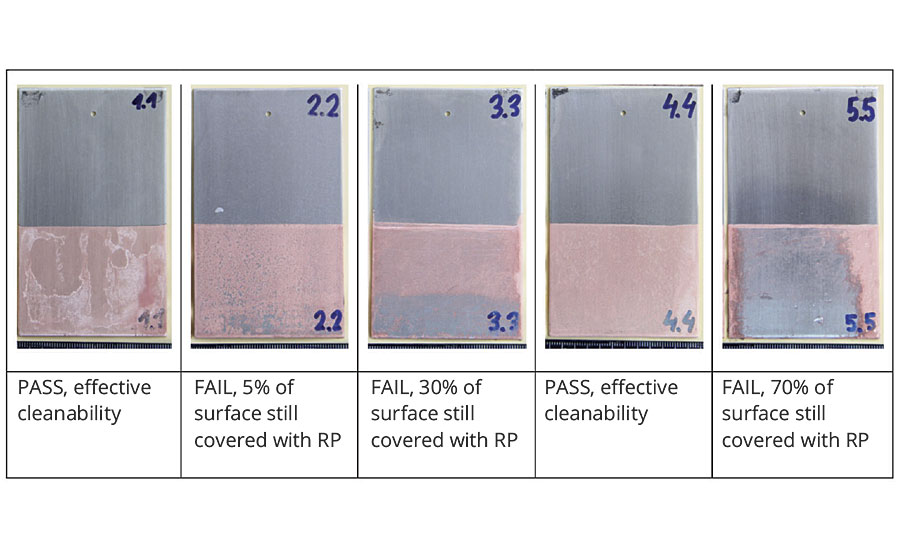 FIGURE 2 » Evaluation of the cleanability of rust preventatives. 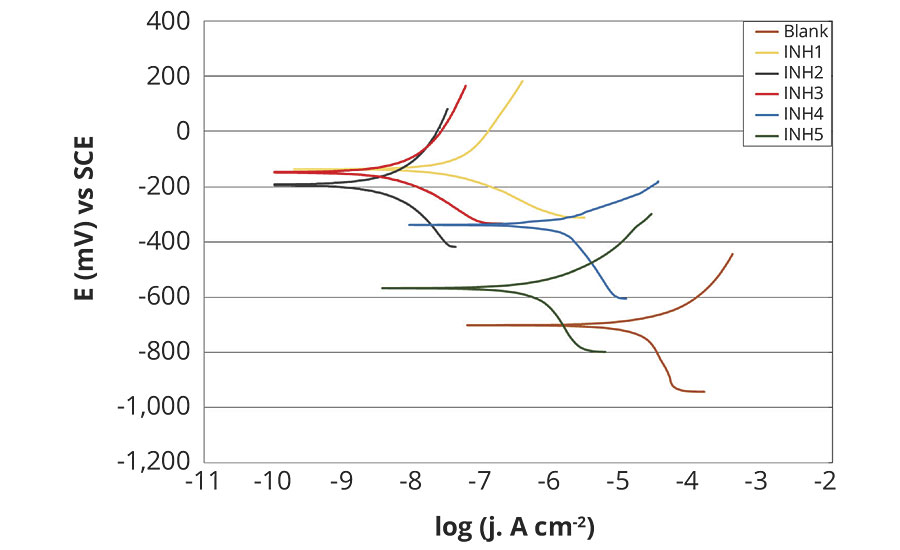 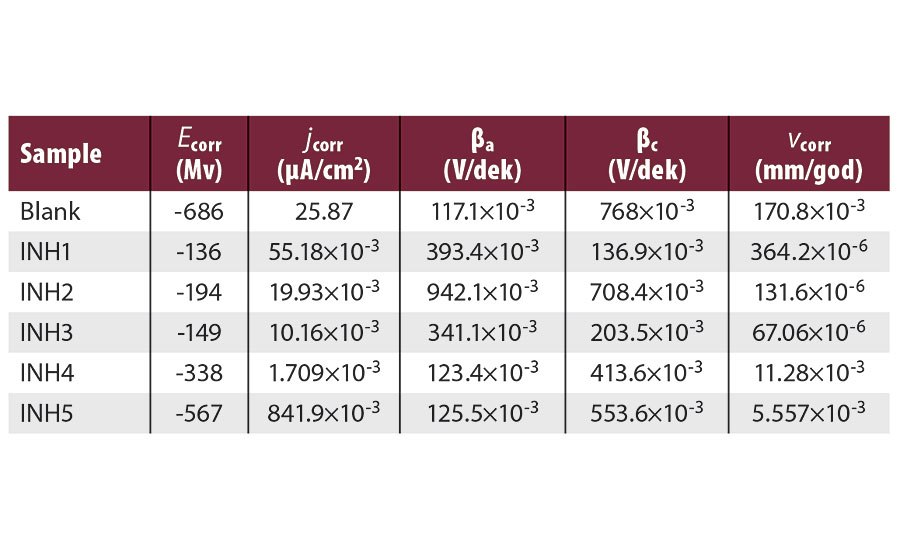 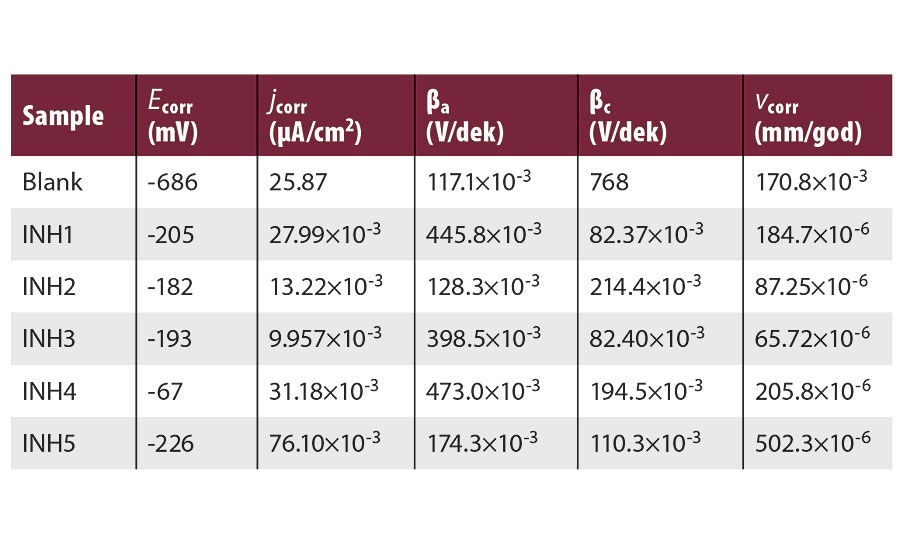 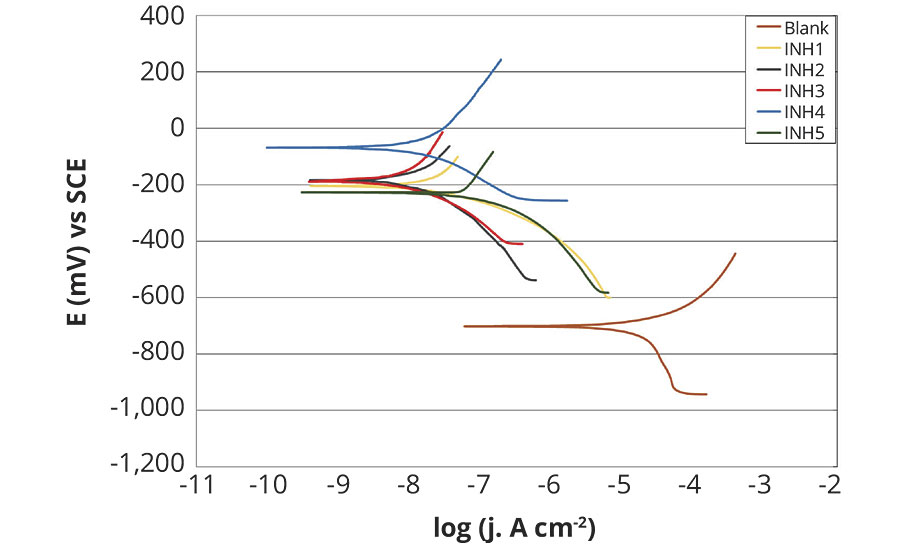 The corrosion inhibition efficiency (h) after 1 and 120 hrs of testing was calculated using the relation (1): 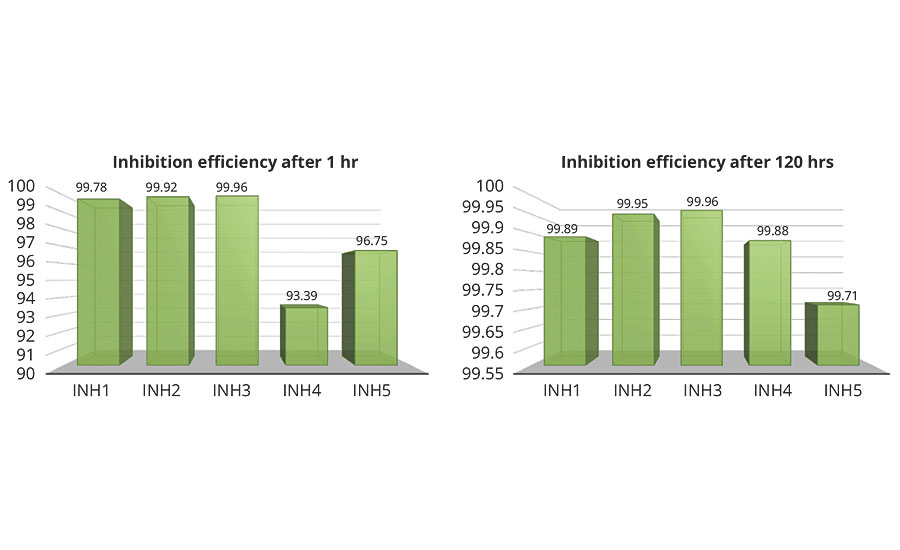 Choosing the proper rust preventative is not only based on durability and effectiveness, but also removal and disposal concerns. A proper selection of rust preventative depends on storage and/or transport conditions, protection period, and also their economic and environmental impact.

The results of this study are summarized as follows:

Following the results from this study, biobased preventative is an excellent and environmentally acceptable alternative to petroleum-based products in temporary corrosion protection.