While the human eye is sensitive to only a small part of the electromagnetic spectrum, pigment interactions with wavelengths outside the visible can have interesting effects on coating properties. One key area of the spectrum is the infrared (IR), specifically the near infrared. While not visible to the human eye, a pigment's, and thus a coating's IR properties can affect usability and durability.

The primary purpose of IR-reflective coatings is to keep objects cooler than they would be using standard pigments. This IR-reflective feature is the basis for their use in markets like Cool Roofing for the EPA's Energy Star Program1 and the California Energy Commission2 Title 24 2008 version. This technology is also finding use in transportation and other areas where the ability to stay cool is a valuable benefit.

The easiest way to increase IR reflectivity is to use white pigments like titanium dioxide. TiO2 reflects in the visible and in the infrared. The key to fight this "White Blight" and produce innovative, colored IR-reflective coatings is to use pigments that absorb in the visible to produce color and reflect in the IR for coolness. From these demands, Shepherd Color has developed a line of highly engineered products called Arctic® IR-reflective pigments. The Arctic line of pigments provides a palette of colors that allows the formulation of coatings and the design of materials to meet infrared reflectivity and long-term durability requirements, and provide deep and rich colors.

Articles have been written about the pigments used to make infrared reflecting coatings. This article is meant to inform chemists and formulators about some specific issues and phenomena pertinent to formulating and optimizing IR-reflective coatings. Some variables and factors that can affect a coating's IR reflectivity are individual pigment selection, milling and dispersing, mixing IR-reflective pigments, opacity, and contamination. 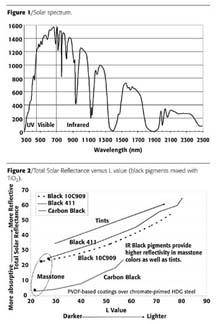 Any discussion of IR coatings requires a short review of basic physics. The sun's energy that reaches the Earth's surface is divided into three parts.