KEYWORDS TiO2
Order Reprints
No Comments
Argex Titanium Inc. (previously Argex Mining Inc.) is reporting the results of a TiO2grade sensitivity study. The objective of thestudy was to evaluate the impact of different TiO 2grades of ilmenite feedstock on the operationalparameters of the CTL hydrometallurgical process. The internal study was completed in collaboration withBBA Inc. of Montreal, Quebec. 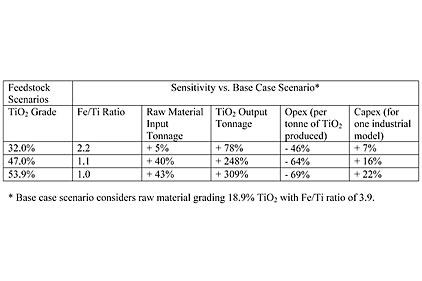 Three different raw material scenarios were considered for the sensitivity analysis with TiO2 grade rangingfrom 32.0% to 53.9% and Fe/Ti ratio ranging from 2.2 to 1.0. The results of the sensitivity analysis arereported in relative percent terms compared to a reference scenario, which is based on the operationalparameters for the production of TiO2 pigment using a raw material similar in composition to themineralization outlined at Argex’s La Blache property (TiO2 grade of 18.9% and Fe/Ti ratio of 3.9).

Theoperational parameters considered in the study include raw material input tonnage, TiO2 pigment outputtonnage, plant capital expenditures (capex), and plant operational expenditures (opex) per tonne of TiO2produced. It was assumed for the purpose of the study that the selected feedstock for each of thescenarios was purchased from a third-party supplier, with the purchase and associated transportationcosts not factored into the study. Credits for Fe2O3, V2O5 or others by-products were also not taken into consideration for the opex parameter of the sensitivity analysis.

The sensitivity analysis is based on the production of TiO2 pigment from a conceptual hydrometallurgical plant based on the CTL process with capacity corresponding to the size of one industrial module as it is envisioned. The production capacity of one industrial module is defined by the size of the acid regeneration units, which was fixed at 58,000 tonnes of Fe2O3 per year and corresponds to two pyrohydrolysis units capable of processing a total of 36 cubic meters per hour of iron chloride solution.

The capex of the hydrometallurgical plant was adjusted for each scenario based on the equipment required to handle different production levels of TiO2 pigment. Operating cost assumptions are unchanged from the La Blache PEA unless noted otherwise. Finishing and coating equipment capex and opex were excluded from the analysis. The costs for electricity and natural gas were set to $0.048 per kWh and $5.50 per million Btu, respectively.

Argex President and CEO, Roy Bonnell, commented on the results of the sensitivity study. “The internal analysis, completed with BBA, demonstrates improved project economics by using higher TiO2 grade feedstock for the CTL process. These promising results demonstrate not only the important value-added that the acquisition of the Lac Brûlé property represents, but also why we have initiated preliminary testing of selected third-party ilmenite concentrates in order to determine the optimal feedstock specifications to maximize the profitability of the process.”

“The internal study shows that an increase in the TiO2 grade of the feedstock significantly lowers the operating cost per unit of TiO2 produced,” said Enrico Di Cesare, COO and Vice President, Technology, of Argex. “With a similar capital investment, we could increase potential revenues by more than three times and reduce our operating expenses per tonne of TiO2 produced by close to 70%. Furthermore, because of the fixed quantities of iron that an industrial module can process due to equipment constraints, results show that lower iron content in feedstock allows the company to process a larger amount of raw material.”