Anticorrosion primers and direct-to-metal (DTM) coatings are coatings with a primary function of protecting against corrosion. A secondary purpose is to maintain aesthetic aspects and value of expensive goods such as cars, trucks and airplanes. Corrosion creates damages of approximately 3-4% GDP1 on an annual basis and therefore has a global economic impact of approximately 3.300 billion USD.2

One of the more common strategies for protecting metals is to cover them with organic coatings. The coating system can consist of several layers, starting from a single layer/monocoat (e.g. DTM) up to three layers (primer, intermediate coat and topcoat). The coating system of choice depends on the environmental exposure, which is defined according to EN ISO 12944-2 corrosion classes (Figure 1). 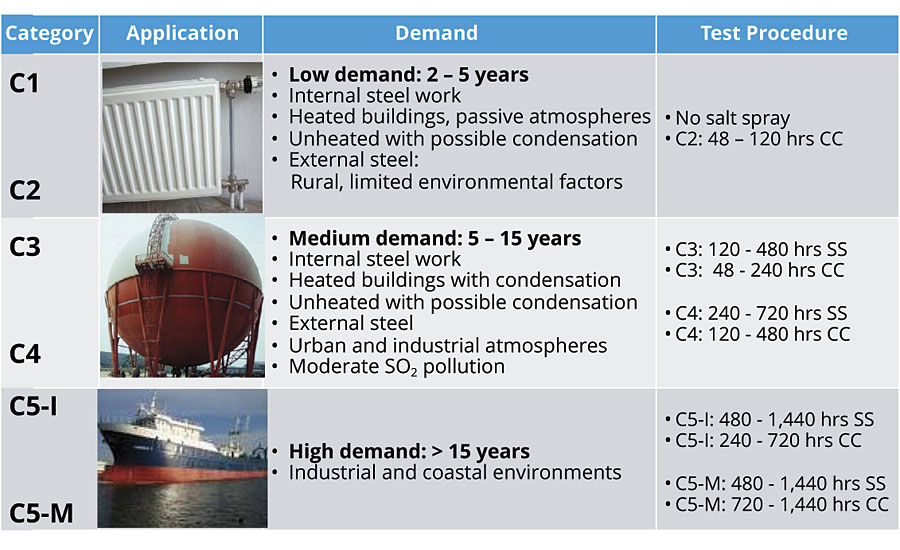 To attain a sufficient protection level, the coating is usually tested for exposure to salt spray and also via a condensate climate test. The exposure time depends on the target corrosion class, which is further subdivided into low, medium and high/long. For the corrosion class C5-I, an additional 168-hr chemical resistance check according ISO 2812-1 is also performed.

The anticorrosive performance is tested according to ISO 9227 in a salt spray chamber with a 5% sodium chloride solution at 35 °C and pH 7. Depending on the required corrosion class the duration will range from 120 hrs up to 1,440 hrs.

The resistance against damages caused by high humidity, such as blister formation, water whitening or bleaching, is tested via a constant condensate climate test according to ISO 6270-1. Depending on the corrosion class the duration can range from 48 hrs up to 1,440 hrs.

In specific cases water immersion can also be tested in classes Im1, Im2 and Im3 according to ISO 2812-2 to determine the extent of damages from blister formation or bleaching. The test duration can range from 2,000 hrs up to 3,000 hrs.

Correlation Between Hydrophobicity and Anticorrosion Performance

Corrosion in this particular case is defined as degradation of metals over time by localized redox reaction. The corrosion process always requires the presence of a metal substrate, e.g. iron (Fe), along with oxygen and water. Electrolyte solutions such as aqueous sodium chloride can significantly speed up the corrosion process (Figure 2). 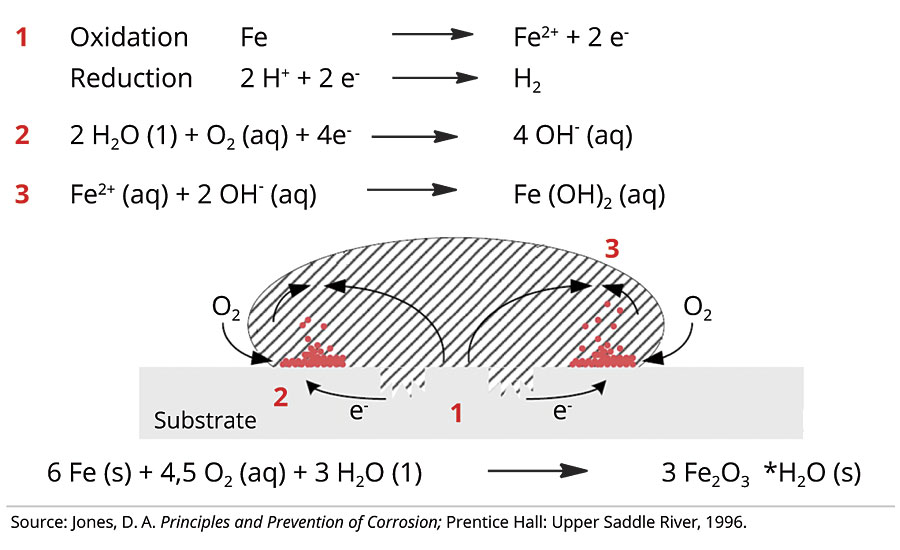 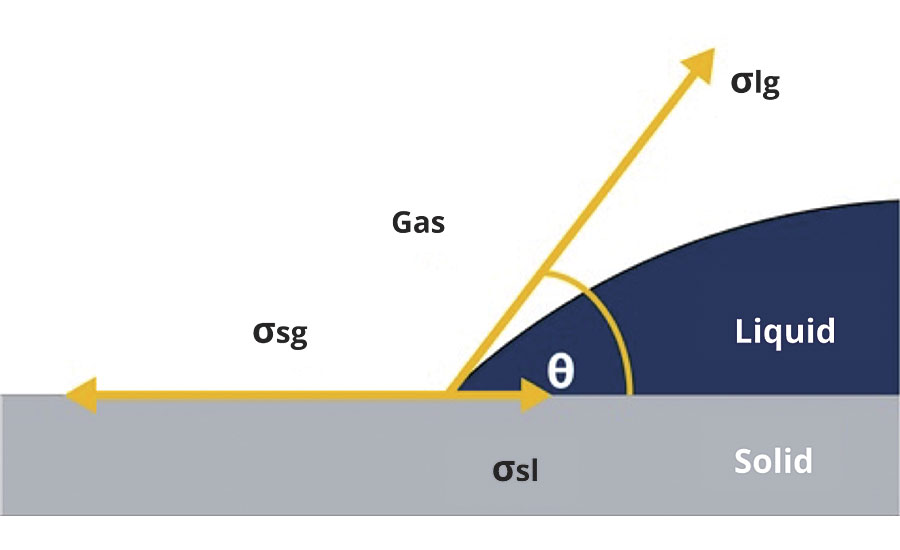 The electrochemical impedance is the time-dependent measurement of current, voltage and phase shift in a defined frequency range. The test is performed with a 3% sodium chloride solution (Figure 4). The water uptake is calculated by mathematical analysis. 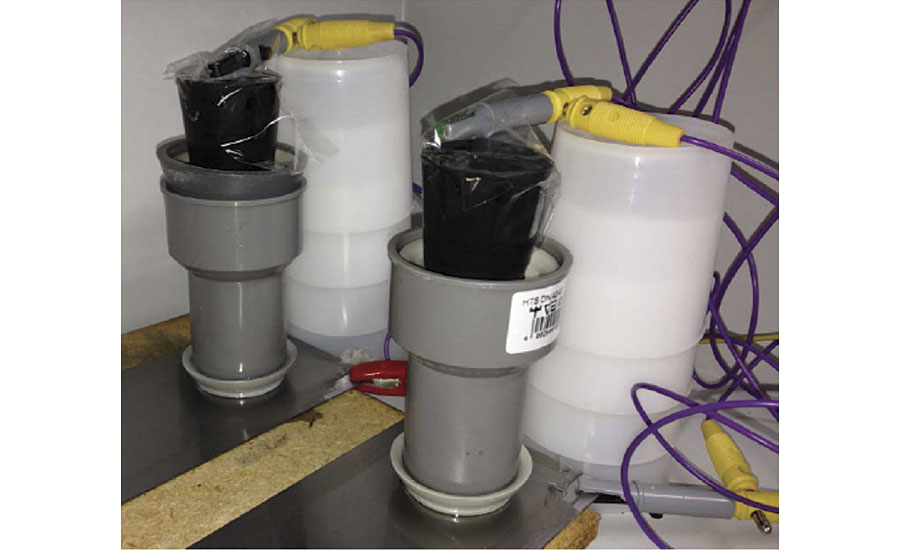 Test of Acrylics and Styrene Acrylics

The pure acrylics and VeoVa-modified acrylics are suitable for DTM topcoats and anticorrosion primers - due to better UV resistance - whereas the styrene acrylics
are generally only suitable for anticorrosive primers or nondecorative monocoats.

For all binders, a test formulation using red iron oxide, talc and Heucophos ZCP plus as an anticorrosive pigment was used. Coalescents were added where necessary to adjust for minimum film formation temperature to a similar value, and adjustments were also made for polymer solids content. The substrate was degreased cold-rolled steel. The coatings were applied by spray coating with 80-100 µm dry film thickness and drying at room temperature.

As a reference, contact angle was measured on the coated panels with a water droplet prior to the salt spray test (untreated samples). There were significant differences visible, with low contact angles like sample SAD1 and very high like sample VAD 2 (Figure 5). 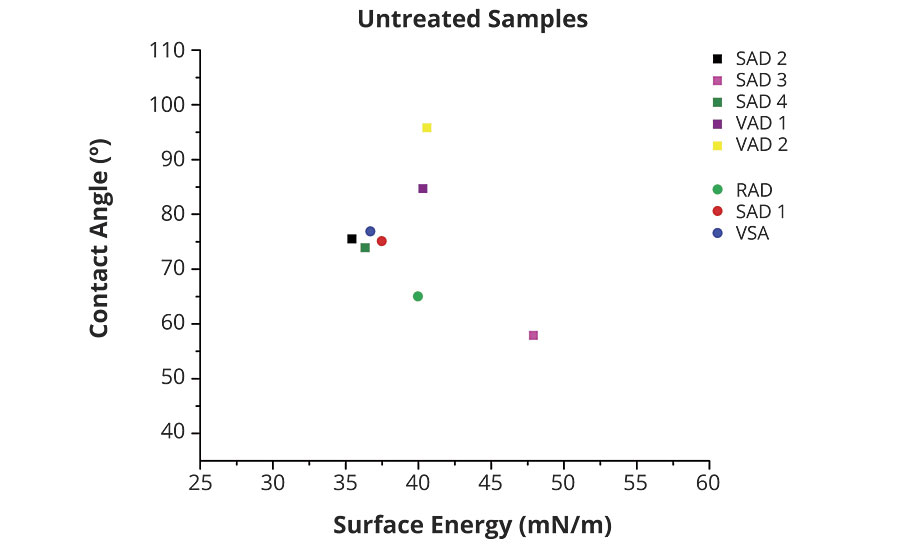 The contact angle measurements with a water droplet after 720 hrs salt spray tests revealed some significant changes vs the untreated samples. Some of them show a high loss of measured contact angle and some only a minor reduction (Figure 6). It can be concluded that the samples in the red circle (RAD, SAD 1 and VSA) behave poorly and show low hydrophobicity compared to the grades in the green circle (VAD 1, SAD 2, SAD 3). 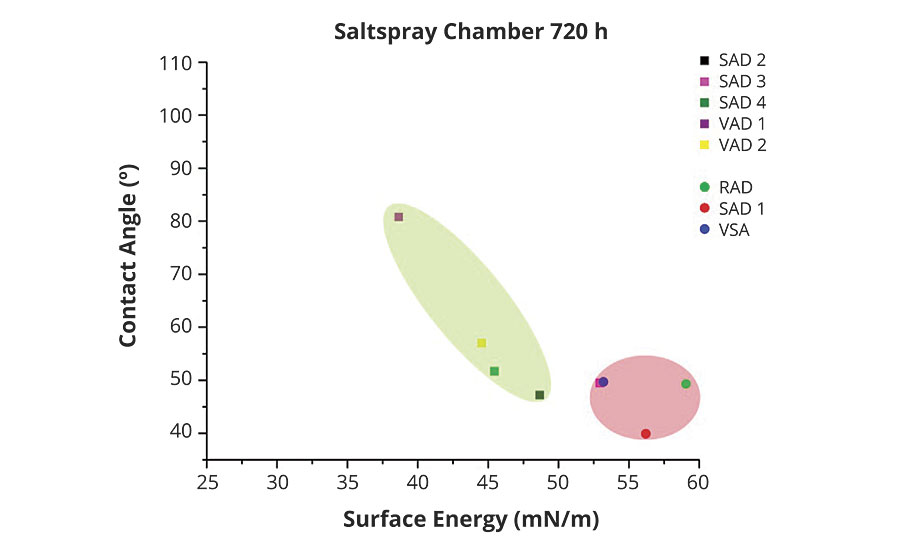 The coated, untreated (not exposed to salt spray test) panels were exposed for 168 hrs for the electrochemical impedance test (Figure 7). In this test SAD 2, SAD 3 and VAD 1 again scored very well, with low water uptake results, whereas RAD and VAD 2 scored poorly, with high water uptake values. Sample SAD 4 could not be measured. 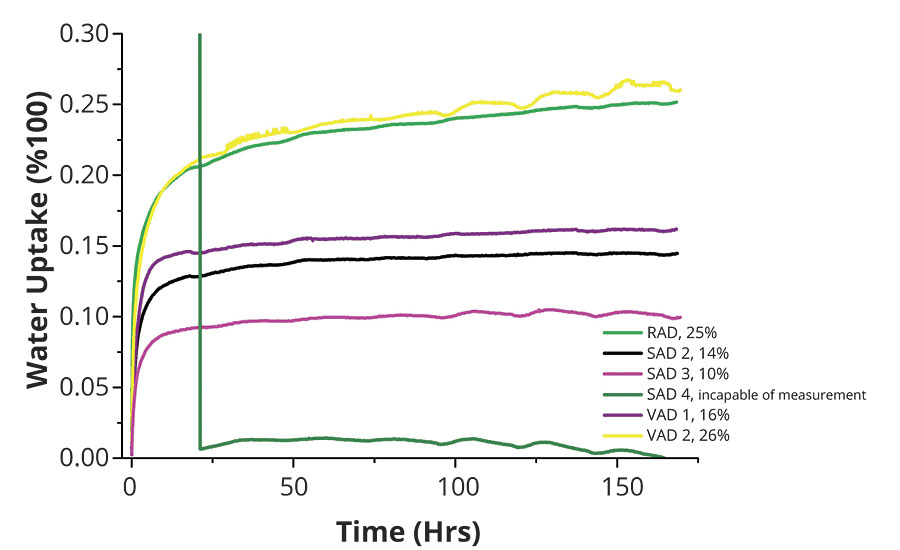 The coated panels were dried 7 days at room temperature and 1 day at 50 °C. After controlled damage with a knife (scribe down to the metal surface) the panels were exposed to 720 hrs salt spray test according to ISO 9227 (Figure 8). It is obvious that samples RAD, VSA, SAD and VAD 2 show quite poor anticorrosion performance, whereas SAD 2, VAD 1 and SAD 3 did rather well. 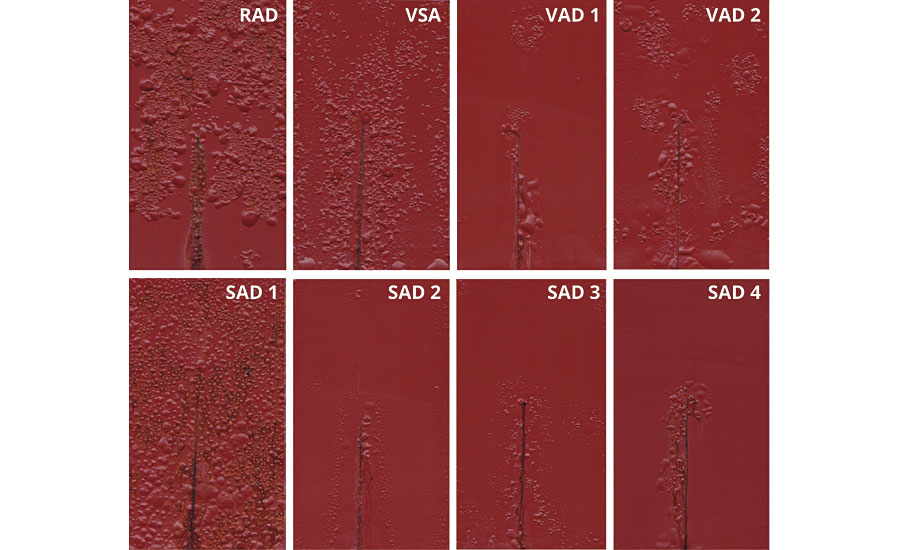 For the high-performing samples VAD 1 and SAD 2, cross-cuts were made at the scribe and then investigated via REM/EDX to analyze for indications of special hydrophobic behavior with both binders (Figure 9). 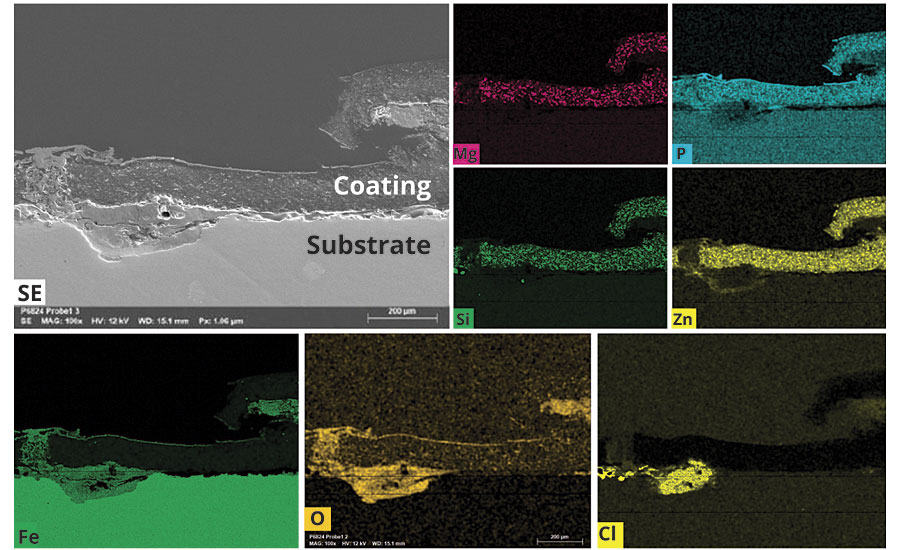 At the left edge the scribe is visible. The element analysis for the chloride ions shows a considerable presence at the scribe, but no presence in the undamaged coating film or at the interface to the metal substrate. This is clear evidence that the electrolyte solution did not penetrate into the coating, nor did it reach the metal surface to support the corrosion process.