Field testing, otherwise known as outdoor exposure testing, is used to assess expected commercial performance of exterior paints and coatings applied to houses and commercial structures. This type of long-term testing has proven to be the best indicator of performance in real-world applications. Laboratory evaluations are beneficial in preliminary stages of product development as a screening tool. However, while laboratory evaluations are faster and less costly, they have considerable limitations. Laboratory evaluations do not account for numerous variables such as the nature and condition of the substrate, microorganisms encountered in actual use, or time frame – in other words, the life of the applied coating. Additionally, when using laboratory testing it is difficult to simulate the migration and depletion patterns that occur in actual use. As a result, outdoor exposure testing is a necessary element in the evaluation of dry-film preservative efficacy in exterior paints and coatings.

Over the past several decades, Troy has invested in properties around the world for field testing sites, selecting locations based on numerous criteria. These sites represent both extreme conditions as well as typical use environments representative of the geographic marketplaces into which customer coatings are sold. Long-term field testing is conducted for Polyphase®, Troysan® and Fungitrol® dry-film preservatives at these locations. Troy customers are located in over 100 countries - and the products they manufacture are subject to many different climates and types of microbial attack. As a result, the breadth of exposure scenarios offered by these testing sites is important. Troy has also recently expanded its network of field testing sites, reaching the present count of 10 sites around the world.

Proper and consistent field test procedures are essential to obtain a reliable assessment of the biological performance of paints and coatings in actual use conditions, which can include the growth of mold, mildew, staining and rot fungi, algae, and/or lichens. Proper field test procedures go a long way to ensuring that an optimum breadth of eventualities is accommodated, and can substantially reduce the possibility of field failure. With this in mind, the protocol developed is based on four important elements:

Pine, cedar, stucco and Hardie board panels are used, reflecting the most common substrates in the marketplace. Test panels are typically exposed vertically (90°), facing north. This orientation promotes mold and algae growth, and the angle corresponds to the most common application, which is wood siding. Different panel orientations and angles are also used at times to evaluate other applications and conditions. For decking materials, the exposure is usually done at a horizontal (180°) angle. Figure 1 shows panel preparation at one of Troy’s Northern Europe field test sites. 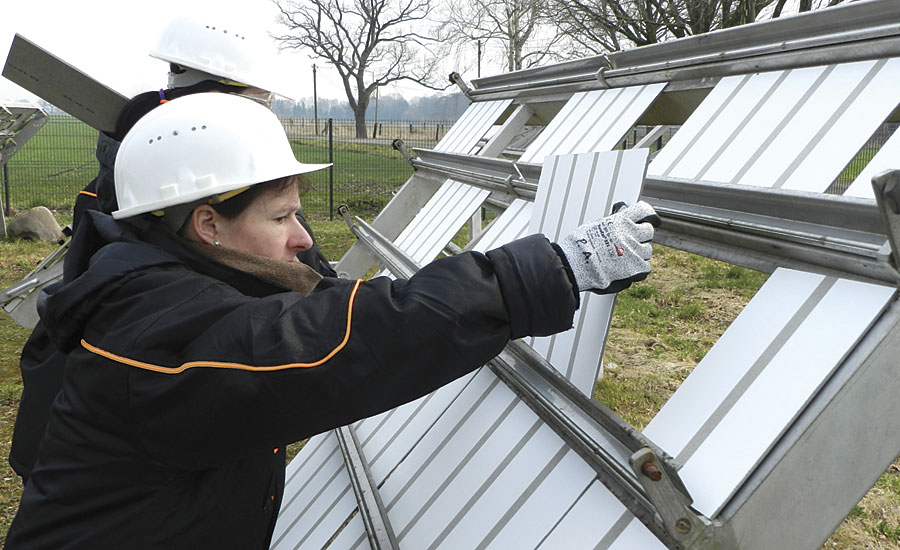 In a typical Troy test procedure, the front of the panel is divided into several equal segments. One of the segments serves as the control, consisting of an unpreserved paint with no film preservative. The same paint with different dose levels of Troy and competitor film preservatives is applied to the other segments of this same panel. The locations of the control and preserved coatings on each panel are random in order to negate environmental effects from panel to panel. This is known as a ‘ladder series’. Figure 2 shows a typical panel arrangement at one of Troy’s Northern Europe field test sites. 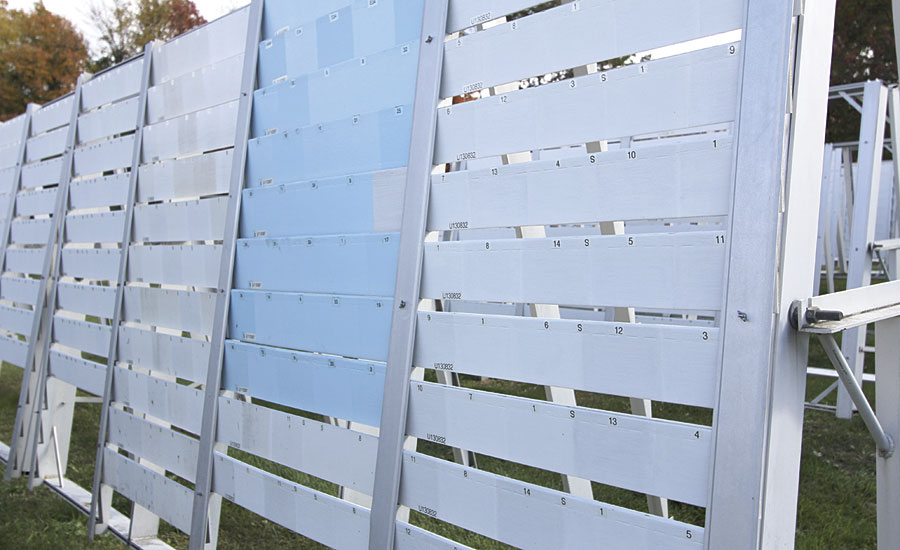 The basic principle of experimental design is randomization and replication. Large-scale panel exposure tests are planned using replicated and randomized designs. In this type of design, panels representing each paint and dose level are replicated several times. Panels are placed on exposure racks in random order to minimize environmental effects such as proximity to the ground. Randomization also minimizes any influences of adjoining panels on each other.

Areas Most Vulnerable to Fungal and Algal Attack

Troy’s field testing sites are located in areas subject to a full spectrum of microbiological attack and a wide range of climates. In many regions, and in fact in some of the world’s most heavily populated areas, coatings are subjected to both fungi and algae. Figures 3-5 show the considerable differences in microbial species and climate conditions in two of the test sites that represent significant markets for exterior coatings – Northern Europe and Southeast Asia. Figure 3 shows the differences in average annual rainfall between these two Troy test sites.1 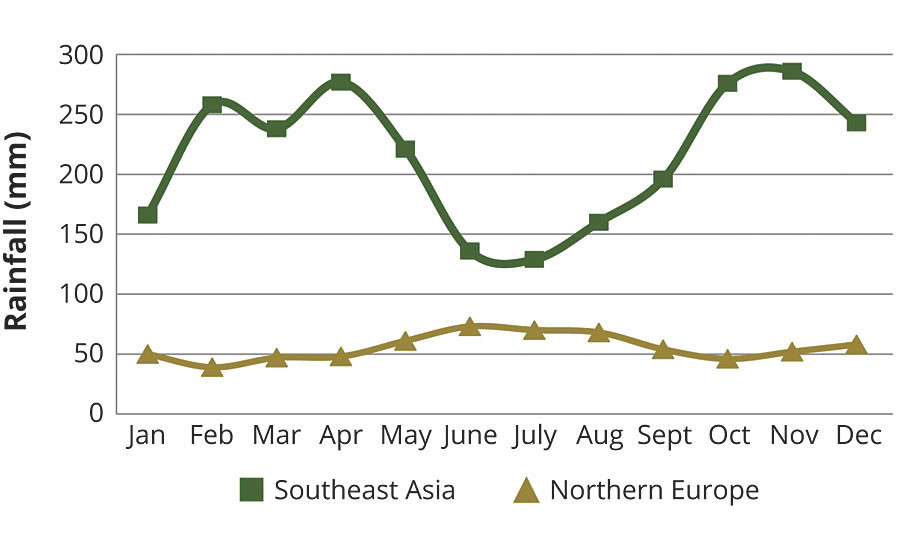 Microorganisms differ greatly from one site to the next, as the examples in Figures 4 and 5 show, again comparing one of Troy’s Northern Europe sites to one of its Southeast Asia sites.2 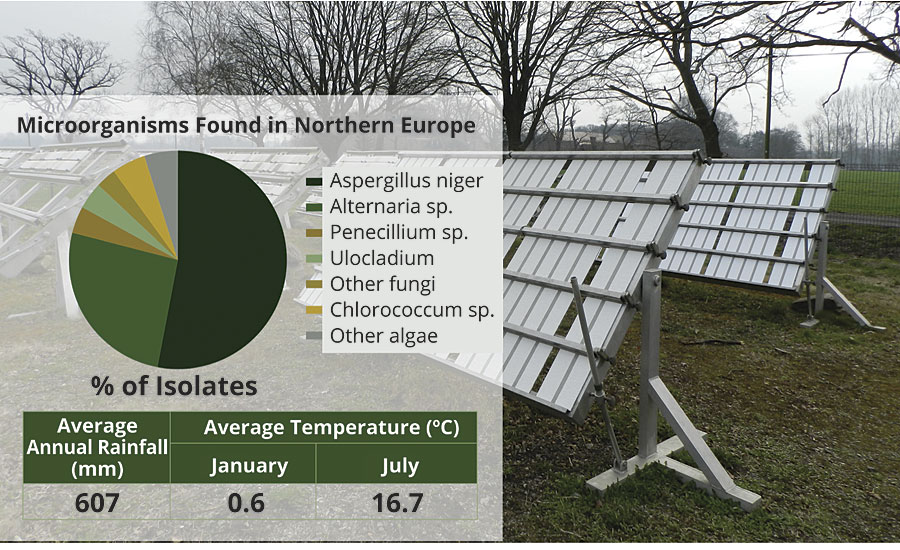 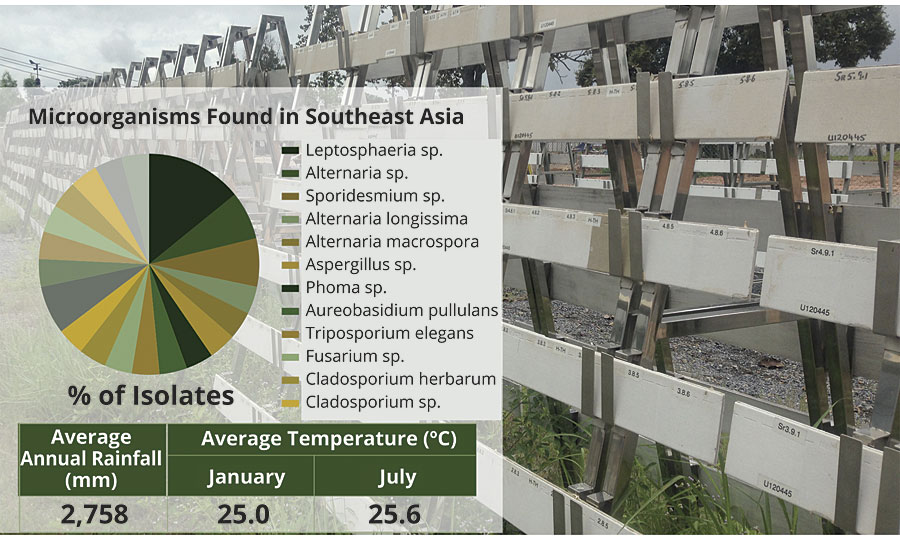 It should be noted that in any region, microclimate conditions can result in noncharacteristic growth - for example, algae or mold growth in a region otherwise typically free of that hazard. Microclimates can develop in many scenarios to produce conditions that differ from the regional macroclimate, such as site proximity to a body of water, complete tree coverage, or placement in an open, windy location.

New and ongoing evaluations are carried out at all Troy field testing sites around the world according to a predetermined schedule for the preservatives being tested. Every one to three months, the test panels are inspected visually and rated in accordance with ASTM (American Standard Testing Procedure) D32742 for mildew or algae growth. The grading scale runs from 0-10, with 0 indicating complete mildew or algae coverage and 10 indicating a complete absence of growth. Test panels are typically exposed for two years in the case of pine substrates, and for three to five years for cedar and masonry substrates.

Figure 6 shows composite performance results of advanced broad-spectrum Polyphase 663 dry-film preservative on cedar for 26 months at the Northeastern, Pacific Northwest and Southeastern U.S. test sites. The comparative results show that Polyphase 663 outperformed the four competitor dry-film preservatives at all three microbiologically and climatically diverse test sites, well beyond the standard deviation. The conclusion is that Polyphase 663 provided long-lasting protection against a diversity of mold, mildew and algae species. These results are valuable to customers intending to market exterior paint across the United States. Nevertheless, regional paint and coatings formulators should note that even though their macroclimate may be known primarily for mold and mildew growth, there are likely to be numerous microclimates in their region that are prone to algal growth as well. As Troy’s experience in developing and testing dry-film preservatives has shown, the broader the spectrum of microorganisms a dry-film preservative controls, the more peace of mind customers and their end-use customers will have. 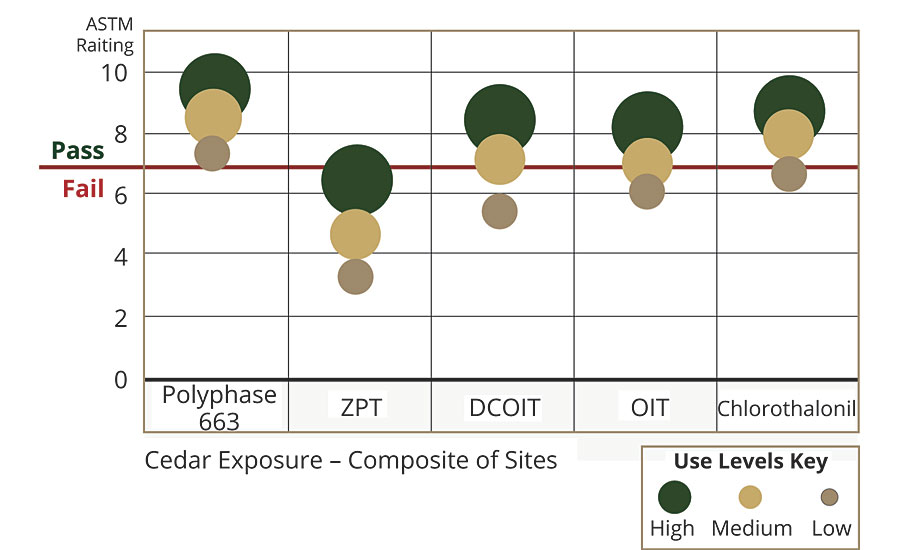 Coatings are subjected to a diverse range of microorganisms around the world, including fungi, algae, lichen and yeast. While laboratory testing is effective as a preliminary screening tool, there is no substitute for long-term outdoor field testing to predict real-world performance. As a result, Troy field testing sites are placed in diverse locations to subject coatings to a variety of climatic and microbiological threats, as well as to represent the conditions found in major markets. When providing testing services to customers, Troy evaluates preservative options at several sites corresponding to the customer’s target market. The ultimate goal is to evaluate and recommend the best performing preservatives that will offer protection of customer coatings across the widest range of potential environmental eventualities for their end-use products.

For more information on Troy field testing as well as other services offered to customers, visit www.troycorp.com.

Testing for the Real World

Noncontact, Real-Time Detection and Analysis of Silicone Films on Surfaces