This website requires certain cookies to work and uses other cookies to help you have the best experience. By visiting this website, certain cookies have already been set, which you may delete and block. By closing this message or continuing to use our site, you agree to the use of cookies. Visit our updated privacy and cookie policy to learn more.
Home » Using Staple Seasonings to Provide a Little Flavor to Your Coating Formulation
Paint and Coatings AdditivesPowder CoatingsPowder Coating Kitchen

Hello fellow formulating chefs. Today’s lesson is on selecting the proper spices to make that perfect powder coating formula. All good chefs start with basic staples to enhance the taste of any dish. In the cooking world nearly every recipe requires a little salt and pepper to bring out the flavor of everything from a nice cut of beef to starches and fresh vegetables. It is no different in the powder coating world, as we employ a myriad of spices and flavorings or in simple formulators’ parlance, additives.

As salt and pepper are common staples used in nearly every recipe, powder coating formulations require a flow agent and degassing agent. The purpose of flow modifiers (aka flow agents) is to normalize the surface tension of the molten film with the substrate and ambient air as the coating melts and flows in the oven. Without them most powder formulas will yield a cratered surface. This phenomenon isn’t due to environmental contamination, but from the diversity of polymeric and oligomeric components in the formula. The flow agent provides “controlled incompatibility” of the various binder components, so they flow together. Resins do not possess a monodispersity of molecular weight, and crosslinkers and other additives may have a significant difference in surface tension compared to the base resin. Hence, sprinkling a little flow agent into the mix is necessary.

The most common flow agents are based on acrylate copolymers which, rather interestingly, are viscous liquids in their neat form. Incorporating a viscous liquid into the dry components of a powder formula is cumbersome and leads to inexact distribution throughout the formula. This problem is overcome by making a masterbatch of the flow agent with either a base resin or by adhering the viscous liquid to an inert substrate such as a silica gel (Figure 1). The latter is the most common method, with a typical concentration of 65% to 70% of flow agent in the masterbatch. This technique solves the problem of distributing the flow agent throughout the raw material mixture prior to the extrusion process. 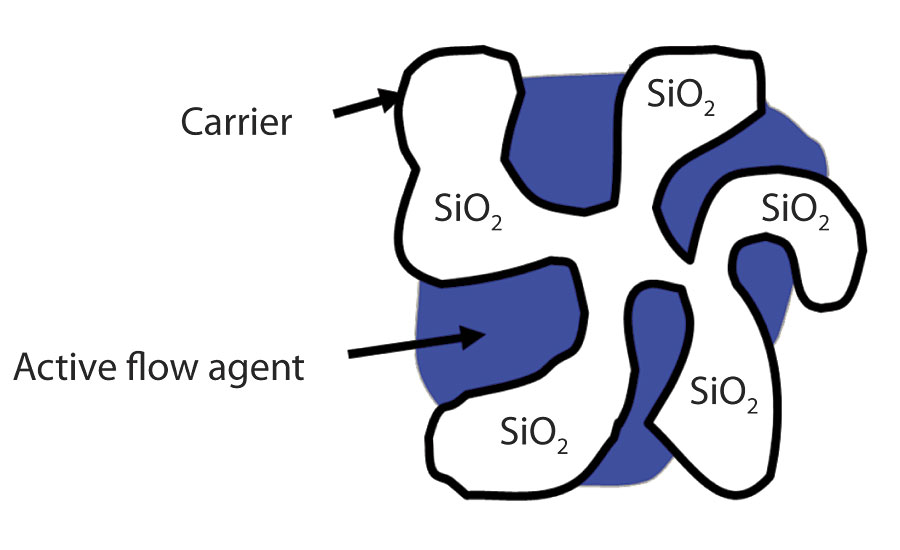 Not all flow agents are viscous liquids adhered to a silica carrier. Some clever technologists have developed 100% solid surfactant-based flow agents that do not use a silica carrier. These high-quality additives are akin to the chef’s array of specialty seasonings such as sea salt, Kala Namak and the highly prized Fleur de Sel. The primary function of a flow agent is to mitigate the inherent cratering of a powder coating formula, however these specialty flow modifiers also influence other properties. Nonsilica-based flow agents provide superior clarity in nonpigmented formulations because there is no inert component to diffract incoming light. In addition, they usually deliver a coating with excellent recoatability, which is a paramount requirement in primer formulations.

Another key issue involves formulating powder coatings for surfaces regulated by the Food and Drug Administration for incidental food contact. Just as the observant chef is required to use kosher salt in her cuisine, so does the chemist formulating a powder coating for compliance to Title 21 CFR 175.300. This regulation describes what materials can be included in a coating being used for surfaces in which food may come into contact. It is important to confer with the flow agent producer as to which of their products comply with this requirement.

With the inclusion of salt in a recipe, a little addition is good, however too much can spoil a dish. So too is the level of flow agent in a powder formula. Not enough, and little or no effect on flow and levelling is achieved. Too much, and the coating will exhibit surface haze, gloss reduction and poor recoatability. Typical concentrations range from 0.5% to 1.5% by weight. Some formulators prefer to calculate the flow agent concentration based on binder content, while others add based on the overall formulation.

The addition of pepper complements salt in most recipes. In most powder coating formulas it is necessary to complement the flow modifier with a degassing agent. Degassing is mainly associated with the expulsion of air during the film formation of a powder coating layer. Powder coatings are deposited on a substrate in a layer of particles of divergent size, typically ranging from about 1.0 micron to close to 100 microns. Interstitial air is present between the particles. During film formation, bubbles are created in the molten film. The timing of the release of these bubbles is critical in creating a smooth coating surface. Consequently, a degassing agent is incorporated in the formula to affect the rapid release of this interstitial air before the coating cures. Otherwise a preponderance of “pinhole” defects will be present in the coating surface.

Degassing agents also assist in the expulsion of volatiles emanating from the coating formulation. These include volatiles from condensation reactions such as hydroxyl-alkyl-amide (HAA)-cured polyesters that emit water, and glycoluril-cured polyesters that emit methanol. Other powder chemistries such as most polyurethanes release a blocking agent during cure. Degassing agents mitigate pinhole defects in all these types of formulations.

The most common degassing agent used in powder coatings is benzoin (Figure 2). This unique compound causes the interstitial air and volatiles of cure to exit the molten coating film before the coating cures and hardens. Benzoin is an aromatic compound and is typically less than 100% pure. Its addition adequately eliminates most degassing issues, however it will discolor upon overbaking and degrade when exposed to UV. 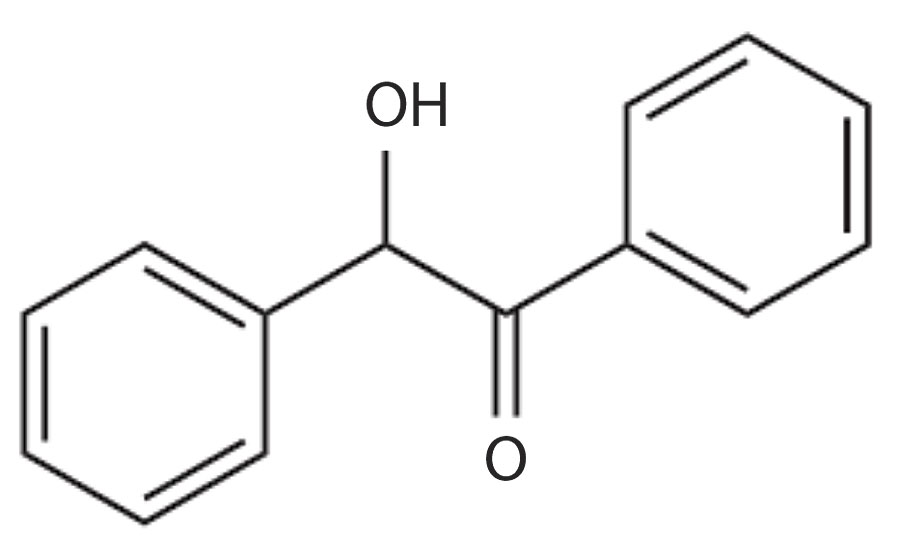 Benzoin is typically formulated at concentrations between 0.5% and 1.0%. Higher levels are needed for formulas with volatiles of cure, but an increase in yellowing is usually incurred. This issue, of course, is less obvious in dark and black coating formulas.

Specialty degassing agents based on proprietary chemistry have been developed by clever chemists. These products virtually eliminate yellowing caused by thermal degradation and also exhibit excellent UV durability. Furthermore, they provide superior clarity in nonpigmented powders, thereby making them the formulator’s choice for exterior durable clearcoats used in automotive and architectural applications. These additives are usually incorporated at levels of 1.0%-2.0% by weight of the binder content.

Like any dish, the simple addition of staple seasonings such as salt and pepper enhance the enjoyment of your culinary experience. So too does the powder formulator enhance the performance of a coating formulation with the addition of a judicious amount of flow modifier and degassing agent. But be careful, a little goes a long way. Happy cooking.

Choosing the Right Pasta for Your Powder Coating Dish

Selecting the Best Resin for Your Recipe