Mixing is the combining of two or more materials to achieve a desired level of uniformity. Perfectly mixed materials can be defined as materials in which samples removed from the mixture will have exactly the same composition as samples removed from other locations within the same batch. Many factors impact the mixing process and the goal of getting a perfectly mixed final product, including the characteristics of the raw materials in a formulation. When coatings manufacturers formulate products and scale-up their manufacturing processes, considering the behavior of raw materials during the mixing process is an important factor in creating quality results. The particle size and density of powders and the viscosity of fluids used within a mixing process are just a few material characteristics among many to consider when choosing the best equipment.

The particle size and density of a powder are characteristics that impact a mixing process. These elements come into play when adding a powder to a liquid mixture, such as the addition of fumed silica into a formulation. Fine particles can be difficult to wet out and disperse. They tend to float to the top when added to a liquid, and they can form tough agglomerates, which make dispersion more challenging.

One solution for powder induction is a high-speed disperser, which is designed to incorporate powders into liquid and break down agglomerates. High-speed dispersers feature an open disc blade that creates turbulent flow and a vortex where dry ingredients can be added. Because the powder is added directly into the tank, the process can create dusting, where the powder gets into the air surrounding the manufacturing process, which can cause safety issues.

Another device that allows the mixing of fine powders into a liquid is a high-shear mixer. This type of device creates mechanical and hydraulic shear by continuously drawing product components into the rotor and expelling them radially through the openings in the stator. These rotor/stator agitators create a finer dispersion but can be less efficient due to flow patterns in the mixing vessel and slow wetting-out of lightweight powders. High-shear mixers offer higher shear but less pumping capacity, which results in a lower limit for viscosity. 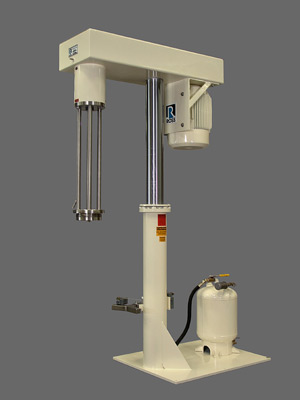 For dispersions requiring both high flow and ultra-high shear, the Ross PreMax, offered by Charles Ross & Son Co., draws product from above and below the mixing head and expels batch material at high velocity through uniquely designed stator slots. This generates upper and lower vortexes allowing for efficient powder additions and rapid turnover rates even at high viscosities around 50,000 centipoise.

Inline high-shear mixers used in conjunction with powder eductors eliminate floating particles and dust issues and offer a more controlled mixing process than a traditional rotor/stator mixer. However, these systems can experience clogging and maintenance issues and require experienced operators to balance the operations of the eductor, the pump and the mixer.

Another development in technology for mixing fine powders into liquid solutions is the Solids/Liquid Injection Manifold (SLIM) technology, in which powders are combined with the liquid exactly where the mixing occurs. Available in batch or in-line designs, the mixers create a vacuum that draws the powder into a high-shear zone where it is dispersed into the liquid. This creates an almost immediate dispersion, preventing the formation of agglomerates and limiting the risk of clogging. 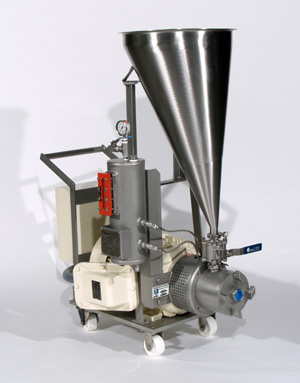 Another material characteristic that impacts the ability to achieve a perfect mix is the viscosity of the liquid ingredients into which powders are introduced. This becomes even more challenging when considering the behavior of non-Newtonian liquids. Shear dependence, both shear thinning, when a fluid decreases in viscosity when it is mixed, and shear thickening, when the fluid increases in viscosity when mixed, are characteristics that mixing processes must address. An aspect of non-Newtonian fluids that often factors into coatings formulations is time-dependent viscosity. Thixotropic fluids exhibit a decrease of viscosity during time under shear and then take a fixed time to return to a more viscous state. Paint manufacturers introduce thixotropic agents into their formulations to change how the paint behaves during application, preventing sagging and running. Printing inks can exhibit rheopecty, time-dependent viscosity where the viscosity of the material increases the longer it undergoes shearing force.

For applications that reach viscosity peaks well beyond 50,000 cps during processing, multi-agitator mixers and planetary-style mixers are required to accomplish bulk flow, dispersion, and uniform heat distribution. These systems are typically equipped with a scraping mechanism to periodically remove product from the vessel sidewalls and bottom surfaces, a feature that dramatically shortens heating and cooling times.

2016: More Consolidation, But Some Pushback

Seeing Beyond the Numbers

Karen has been PCI’s Associate Editor since 2007. She is responsible for PCI’s weekly e-newsletter, as well as all of the departments in the magazine and the annual Global Top 10 and PCI 25.