Solventborne alkyds continue to be popular due to their versatility, ease of application, good adhesion to metal (even poorly prepared metal) and lower costs. High-solid alkyds were developed to address the need for lower VOC. To obtain higher solids at a useful viscosity, the molecular weight of the alkyd resins was lowered. This lower molecular weight has negative impact on dry time and overall coating performance, including corrosion protection.

Water-reducible alkyds were developed to offer options for even lower VOC than obtained with high-solids alkyds. Water-reducible alkyds typically utilize trimellitic anhydride or other raw materials that add carboxylic acid groups to the alkyd backbone. They are supplied at 70-75% NV in hydrophilic solvents, and the acid groups are neutralized with amine to make the alkyd water dispersible. Coatings with water-reducible alkyds can be formulated to 250-320 g/L VOC. However, water-reducible alkyd coatings also have limited shelf life due to the hydrophilic nature of the alkyd due to hydrolysis, which lowers the performance of the coating. Both high solids and water reducibles have been used for many years to achieve lower-VOC coatings not obtainable with conventional solids alkyds. 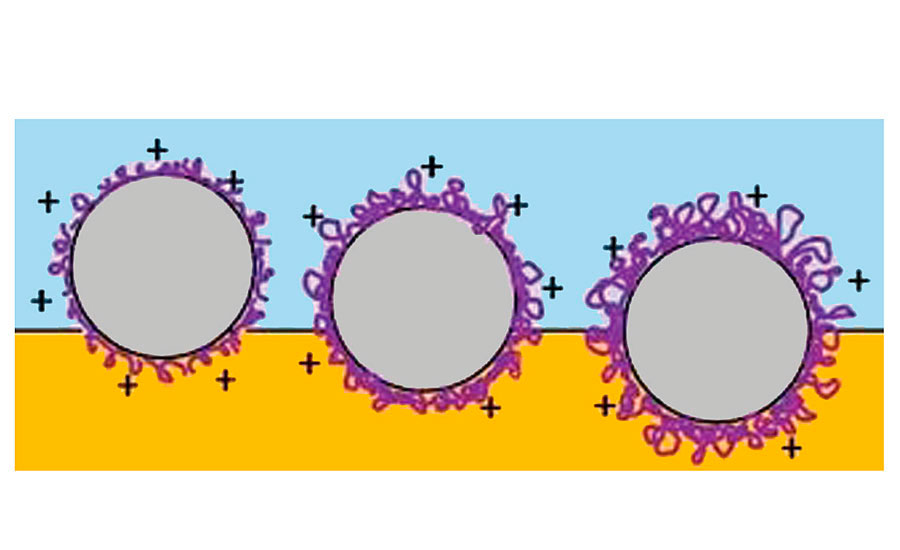 FIGURE 1 » Illustration of an alkyd emulsion

The second waterborne alkyd technology in the marketplace involves polymerizing a higher-Tg acrylic shell around an alkyd core; this technology is referred to as core shell alkyd dispersion (Figure 2). During manufacturing, an extremely low-molecular-weight alkyd is copolymerized with a high-Tg, hydrolysis-resistant acrylic monomer, grafting the acrylic to the alkyd. Acid functionality is built into the acrylic shell, which is then salted with an amine to make the acrylic-modified alkyd water dispersible. The acrylic shell surrounds the alkyd, protecting it from hydrolysis, making the core shell hybrid dispersion more shelf stable than a typical water-reducible alkyd. This core shell hybrid dispersion has faster dry times than an alkyd emulsion due to the high-Tg acrylic shell. Unfortunately during polymerization, a lot of homopolymer of acrylic monomers occurs (not attached to the alkyd). The high acid value of the acrylic homopolymer, and the fact that the alkyd core is lower molecular weight than typical, results in water sensitivity and poor corrosion resistance. 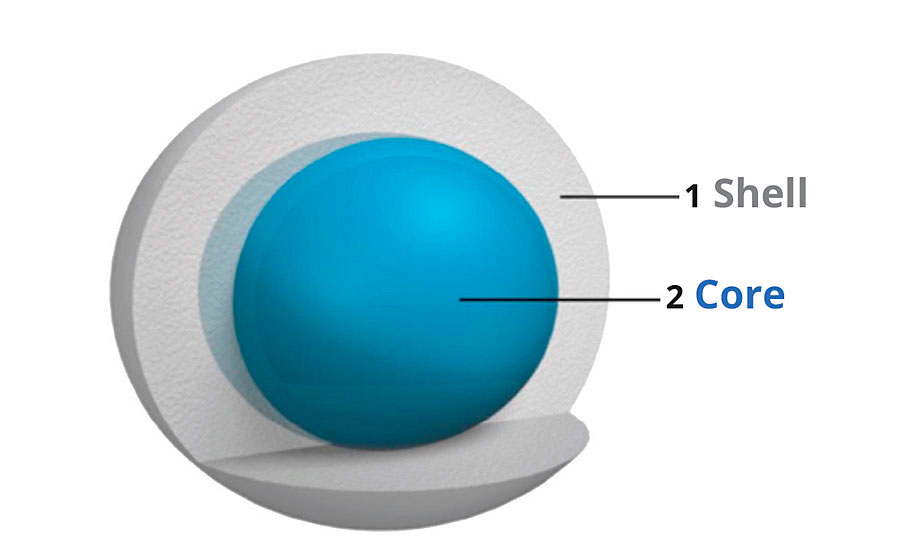 Samples of two competitive alkyd emulsions and two competitive core shell alkyd dispersions were obtained and tested for dry time, gloss, hardness, salt spray and condensing humidity resistance to benchmark against the newly developed product. The first alkyd emulsion had tack-free time of about 2 hrs and through-dry time of ~9 hrs (Table 1). Salt spray performance after 300 hrs at 1.5 and 2.0 mils DFT was marginal for scribe creep and blistering, and showed some face blistering. When tested 16 hrs on QCT humidity, the film had severe blistering and total loss of wet adhesion (Figure 3). 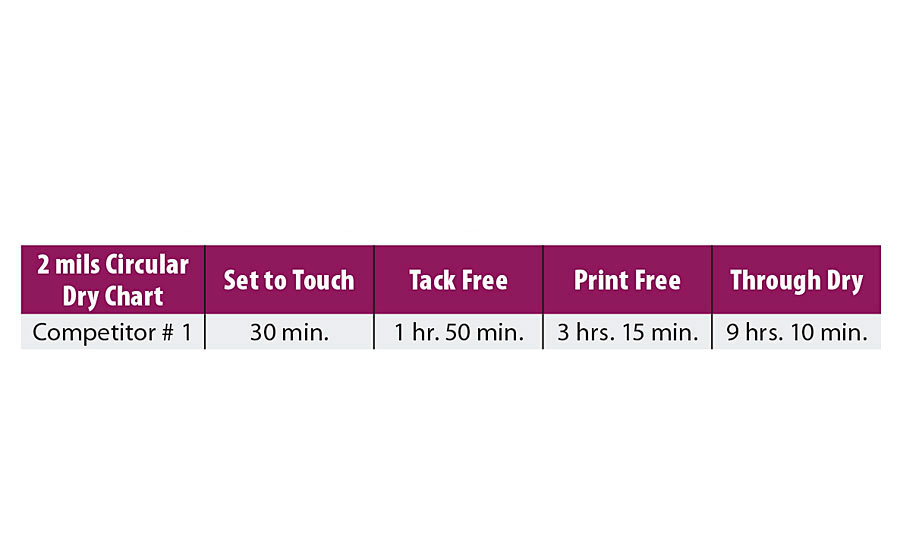 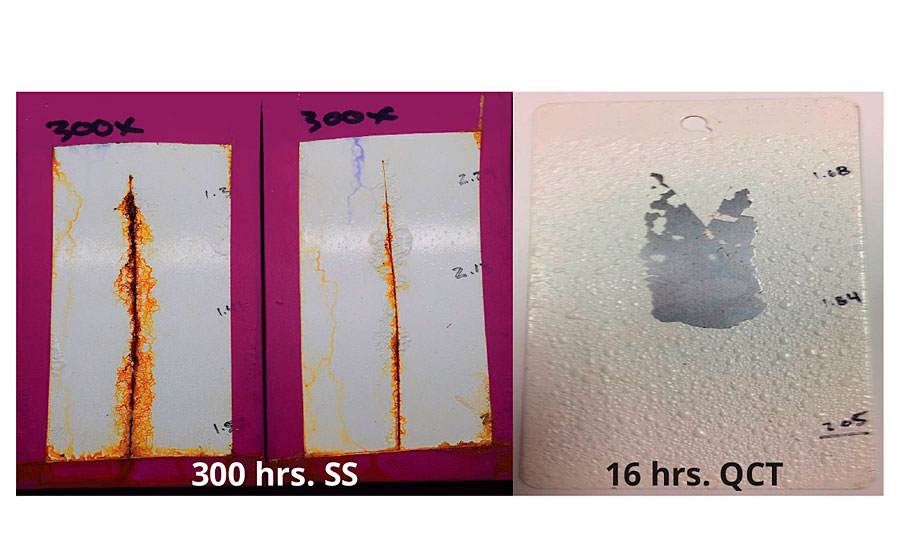 The second competitive alkyd emulsion was also tested as above in the same white paint formulation. Tack-free time was a little slower at 3 hrs with the same through-dry time of ~9 hrs (Table 2). Gloss was also a little low at 76%. Salt spray performance after 300 hrs was also marginal for scribe creep, with some face rusting. QCT humidity testing at 16 hrs did not show blistering, but still had no wet adhesion (Figure 4). We concluded that high levels of surfactants or type of surfactants detract from salt spray and humidity resistance of the coating. 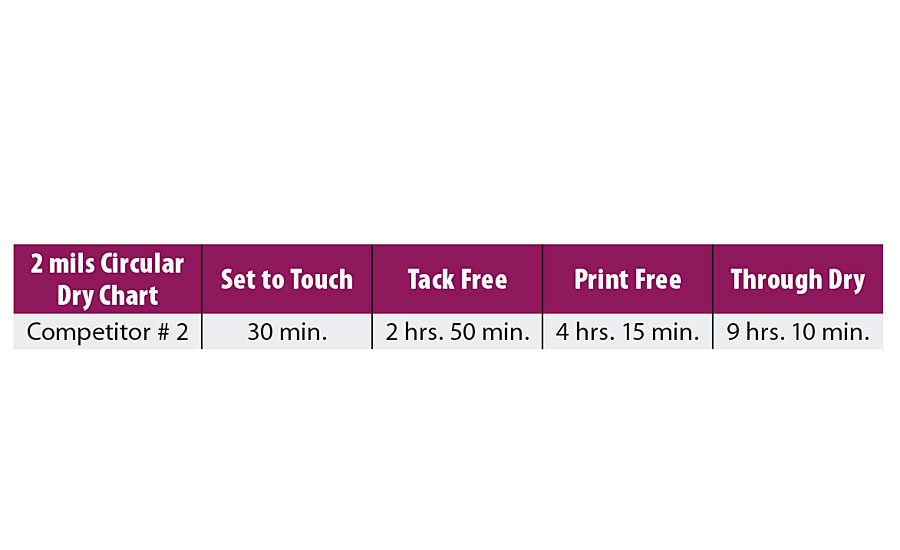 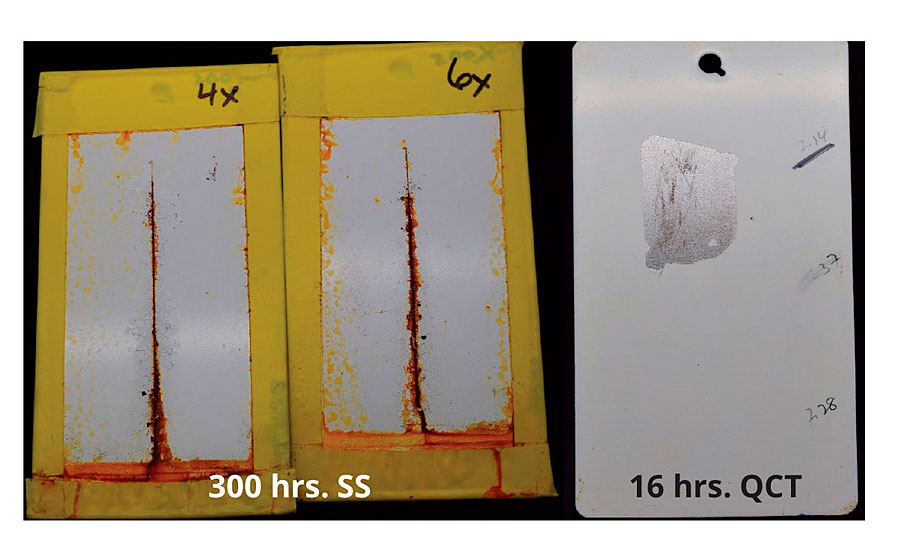 Two competitive core shell acrylic-modified alkyd dispersions were tested in the same white paint formulation. Through dry was extremely fast, three hours or less, as would be expected due to the high-Tg acrylic modification (Table 3). However, salt spray performance was very poor. Figure 5 represents 300 hrs salt spray test, but the test panels looked this bad after only 100 hrs. 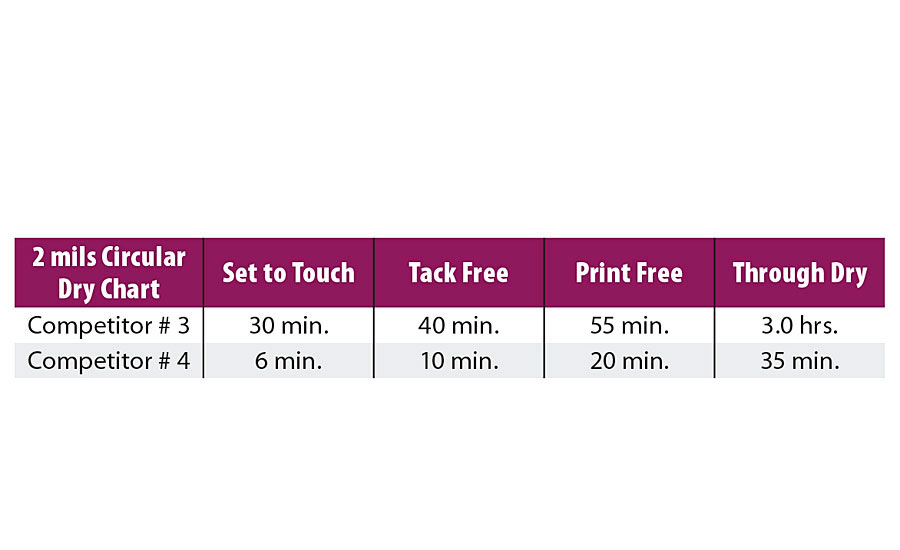 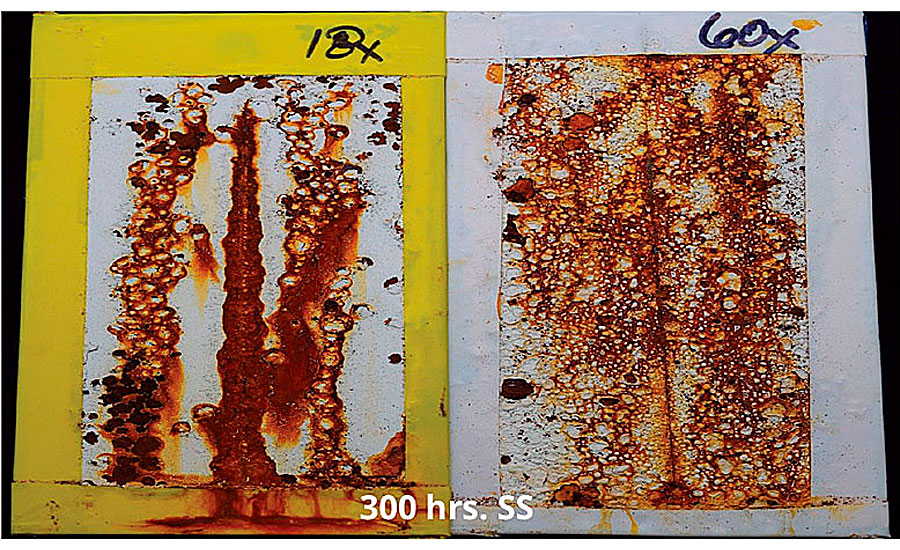 With the above objectives in mind, Polynt has developed a new alkyd backbone to enhance performance in water (Tables 4 and 5). Based on many years of alkyd knowledge and expertise, R&D chemists modified an alkyd backbone to improve alkyd emulsion stability (acid functionality was critical), hardness development (higher-Tg hydrophobic polyols and acids used) and corrosion protection. For improved corrosion resistance, the higher-Tg hydrophobic components were critical, along with the proper choice of surfactants and surfactant levels (use as little as possible while maintaining hot box stability). Many newer surfactants and reactive surfactants are in the marketplace specifically for alkyd emulsions. Also critical for best corrosion resistance was selection of the pigment dispersant in the paint formulation. Last, a process was developed to successfully emulsify the hydrophobic, high-Tg, high-molecular-weight/viscosity needed so that said alkyd could be inverted into water and relatively high solids could be obtained. These initiatives combined led to the performance of a short-oil chain-stopped alkyd in water that is comparable to commercial solventborne alkyds. 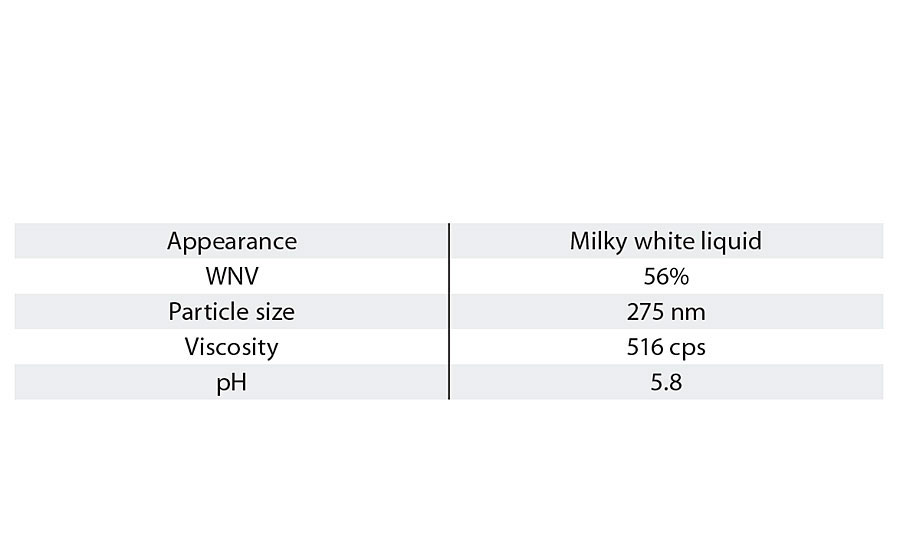 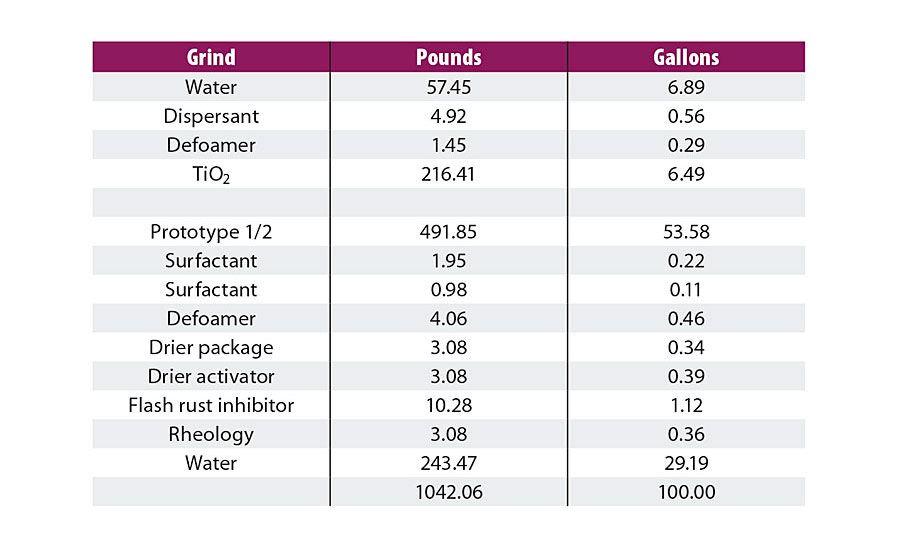 The newly developed DTM short-oil alkyd emulsion was tested for dry times, hardness development, 300 hrs salt spray at both 1.5 and 2.0 mils DFT, and condensing humidity. Through dry was around 6 hrs, better than the competitive alkyd emulsions (Table 6). Koenig hardness after two weeks was 41 secs, showing better hardness development than the competitive alkyd emulsions, but not as hard as the acrylic-modified core shell dispersions. Salt spray performance was outstanding after 300 hrs, and there was no effect on adhesion after 16 hrs condensing humidity (Figure 6). Performance of the developmental DTM short-oil alkyd was comparable to solventborne performance. 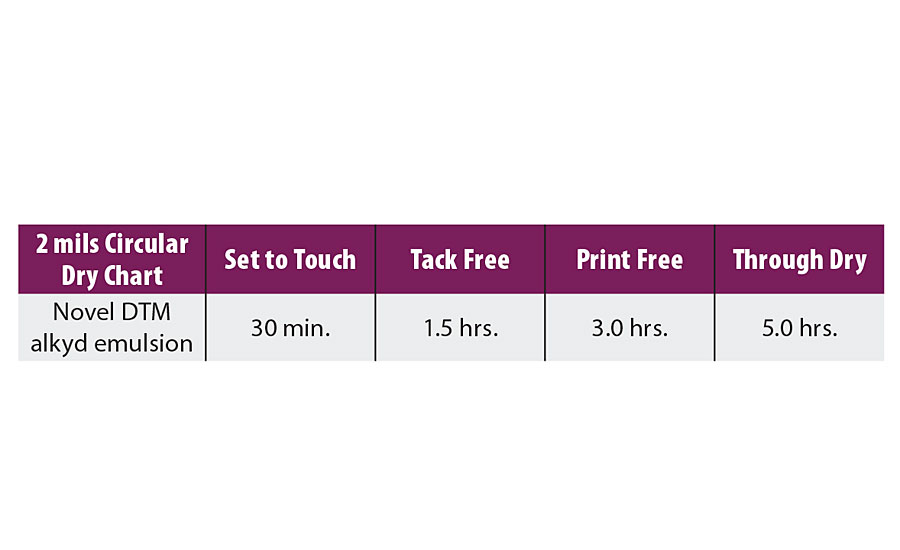 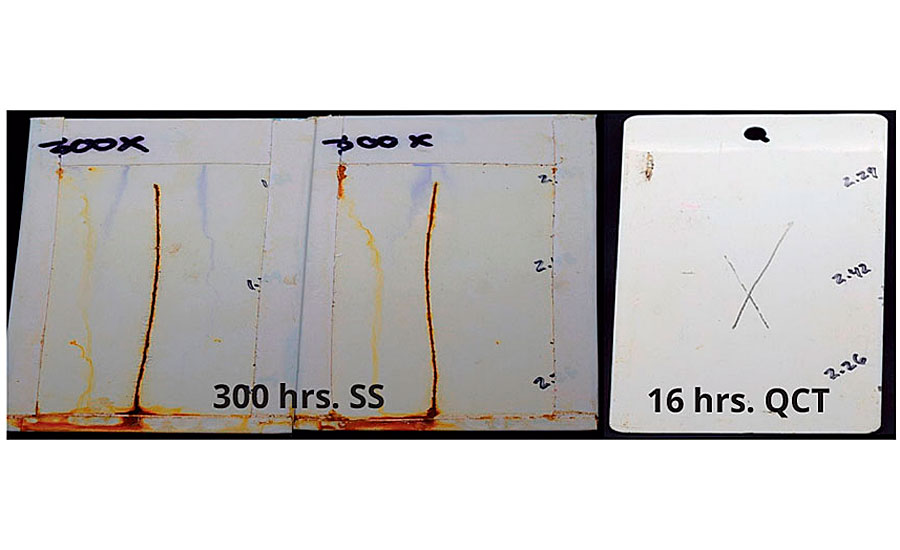 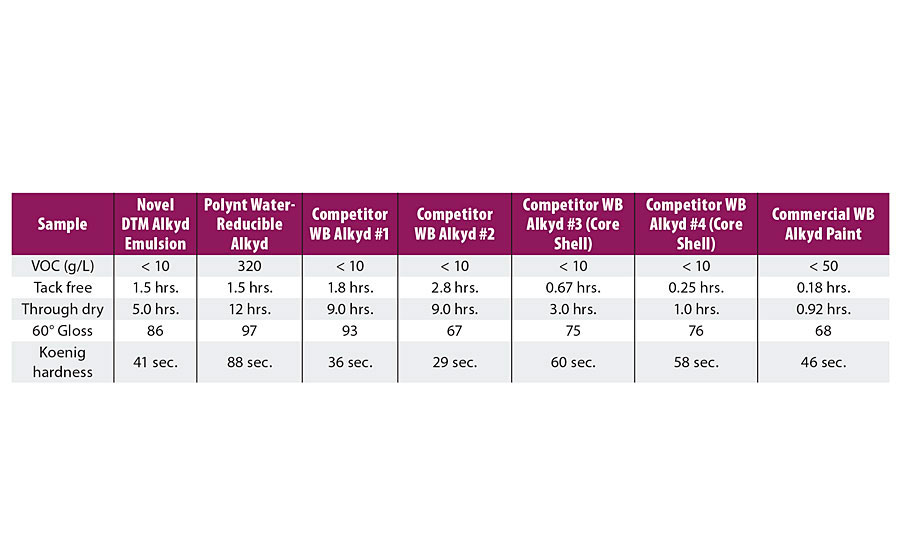 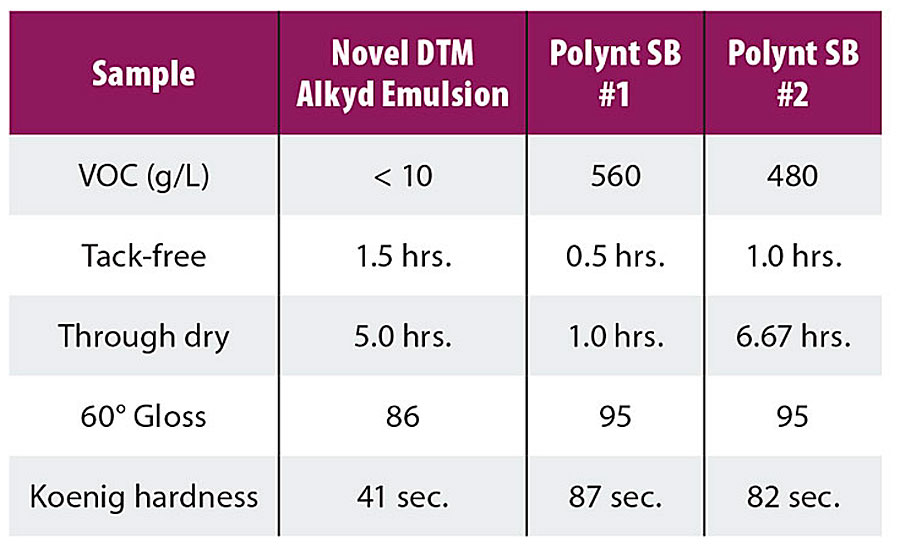 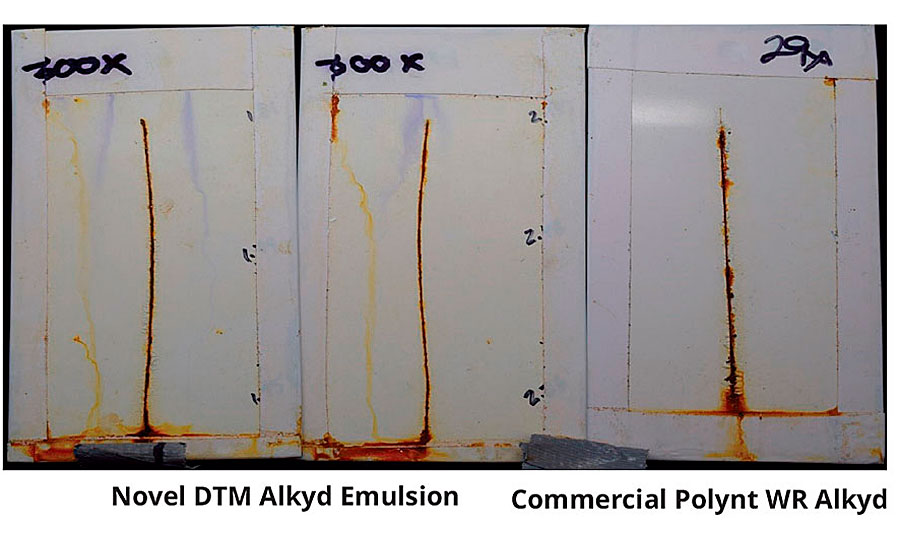 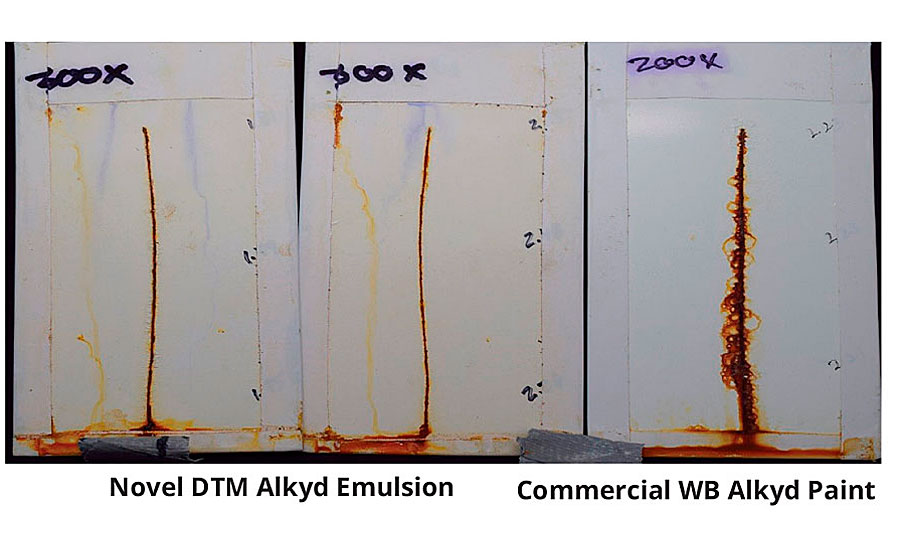 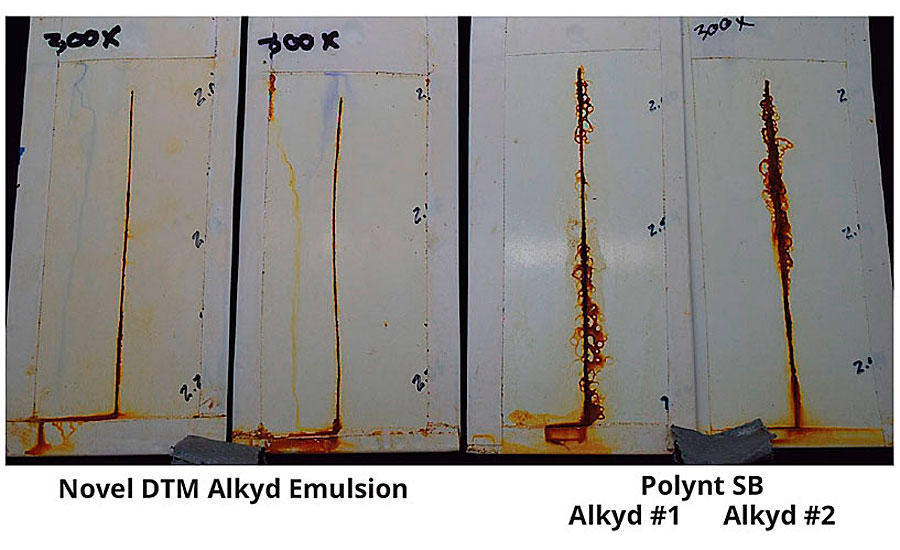 The combination of a high-Tg, hydrophobic, high-MW alkyd with the proper surfactants and levels can produce a highly corrosion-resistant DTM alkyd emulsion when formulated with select pigment dispersants. Formulation of this alkyd emulsion into waterborne DTM paint at near-zero VOC can produce coating performance comparable to solventborne, conventional-solids, chain-stopped alkyds. This new DTM alkyd emulsion can close the performance gap between commercial waterborne alkyds and conventional solventborne alkyd technologies with regard to gloss, adhesion, and corrosion and humidity resistance at near-zero VOC.

Development of a Waterborne, Zero-VOC DTM with Excellent Corrosion Resistance