Today, growing concerns about the negative impact of volatile organic compounds (VOCs) on the environment have motivated the development of stricter regulations that control the VOC content of coatings. Due to this, coalescents with higher molecular weights and boiling points have been developed in order to comply with these regulations and help paint formulators to develop low-VOC paints.

Atomic force microscopy (AFM) is a consolidate technique for evaluating the morphological aspects of latex films2,3 as well as the effects of drying conditions and coalescent content on latex film formation.4

In this work, latex films containing three low-VOC coalescents, based on Method 313 of SCAQMD (South Coast Air Quality Management District), were evaluated through AFM, and their impact on film morphology and phase distribution within the films was compared to the impact of a standard high-VOC coalescent.

Commercial vinyl-acrylic and pure acrylic latexes were used in the AFM evaluations.

Three of the coalescents evaluated are commercial and one coalescent is an experimental product. The coalescent descriptions are presented in Table 1. 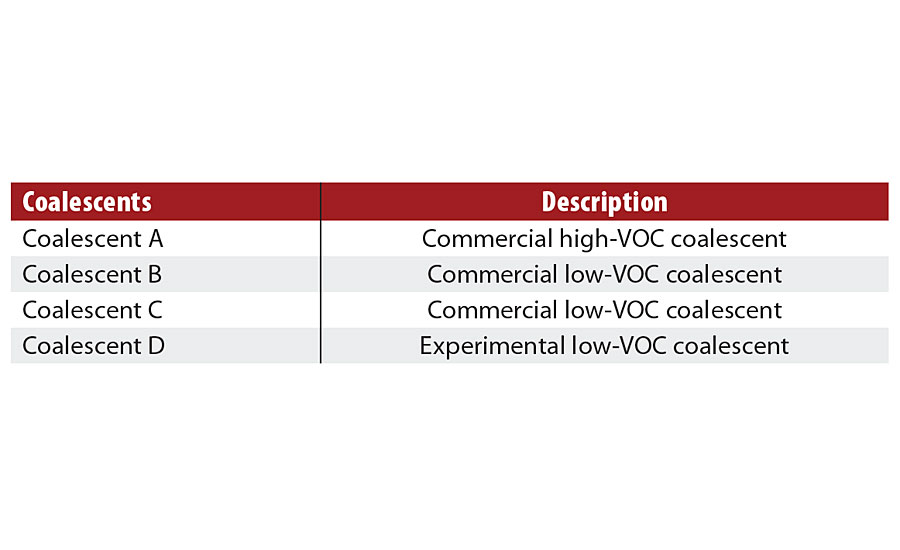 TABLE 1 » Coalescents evaluated in this work.

VOC content within the coalescents was determined according to ASTM 6886 using methyl palmitate as marker as specified by Method 313 of SCAQMD.

The boiling temperature analyses were perfomed according to ABNT NBR 9292.

The density of the coalescents was determined in a Metler DE-40 density meter.

The MFFT evaluations of the latexes containing different coalescents were performed according to ASTM D2354. The equipment used was a Rhopoint-MFFT 60.

Preparation of Films for AFM Evaluation

Vinyl-acrylic and pure acrylic latexes, containing 8 parts per hundred of polymer (php) of different coalescents were cast on glass substrate, cover slip. The latex films were dried at 25 °C and 50% RH for 3 days before the AFM evaluations.

AFM images of the surfaces were obtained using a commercial setup (NX-10, Park Systems, Korea). The microscope was operated in intermittent contact mode, slightly below the frequency of resonance, in N2 and at room temperature, using NCLR (Nano sensors) Si probes with spring constant of 48 N.m-1 and resonance frequency within 190 kHz. During scanning, both topographic and phase-contrast images were recorded. Analysis and processing of the AFM images were performed with the Gwyddion software.

The vinyl-acrylic and acrylic latexes evaluated in this work are conventional latexes widely used in the American market. The main properties of these latexes are presented in Table 2. Both latexes have typical solid content, particle sizes ranging from 200 to 300 nm, and MFFT lower than their Tg, probably due to the presence of hydrophilic groups within the latex particles that help their hydroplasticization.3-5 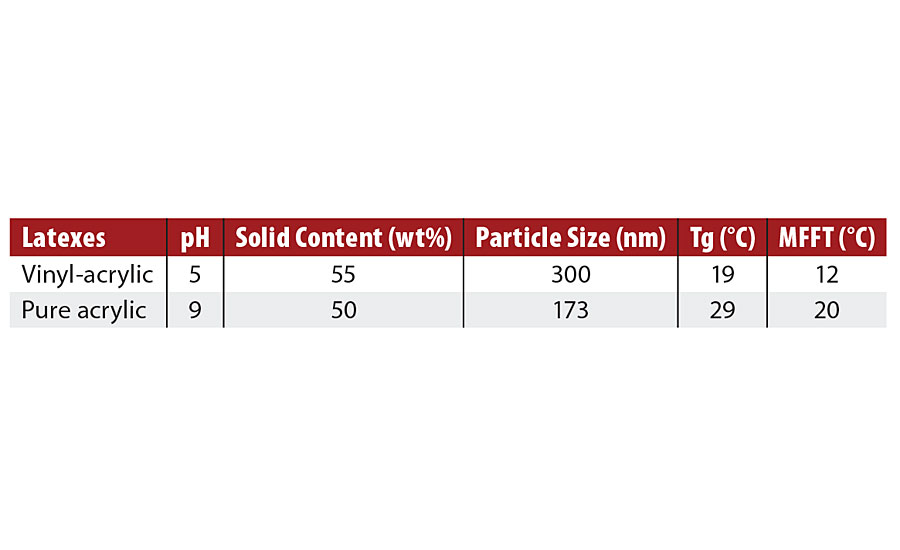 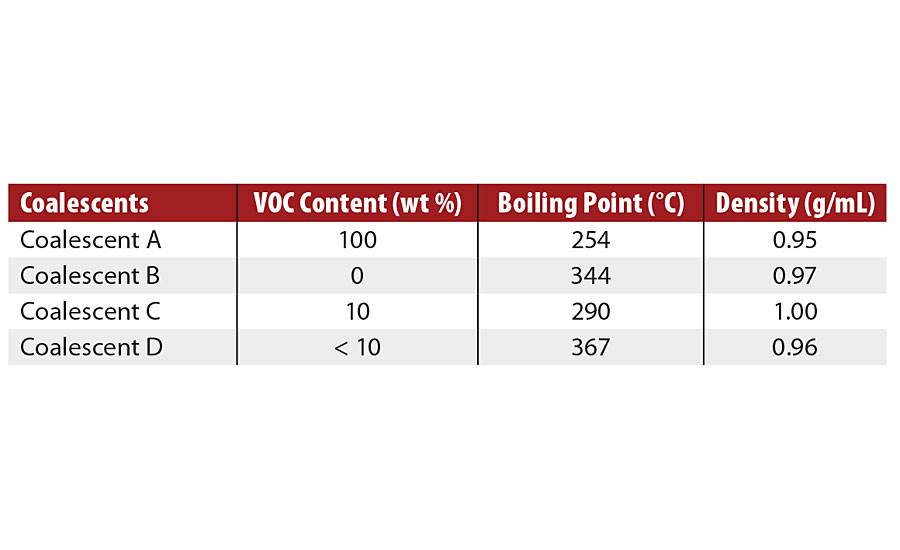 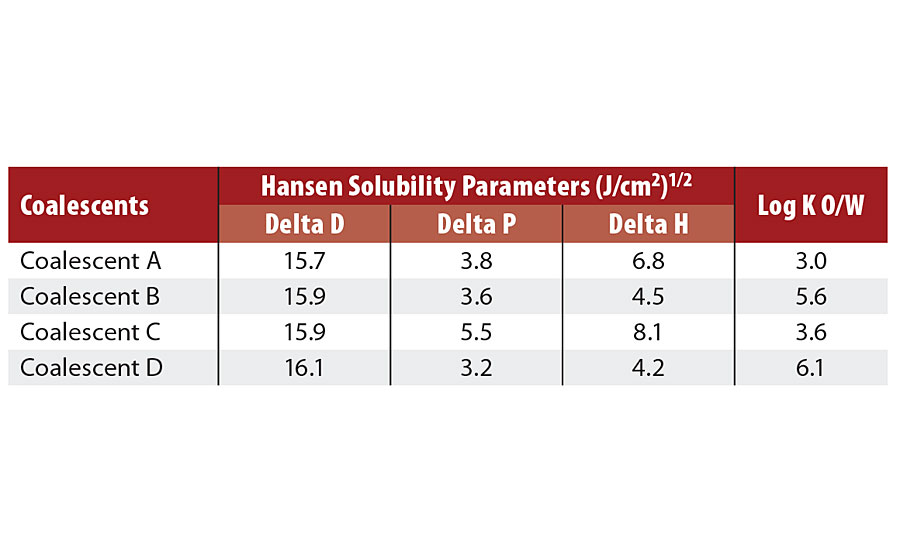 Based on Table 3, the low-VOC coalescents have VOC content lower than 10 wt% based on Method 313 of SCAQMD and boiling point higher than 290 °C.

All coalescents investigated have high dispersion energy (Delta D), which means considerably high hydrophobicity, and most of them (except Coalescent C) have polarity ranging between 3.2-4.5. Coalescent C has the highest polarity and ability to form hidrogen bonds among the coalescents evaluated.

Figures 1a and 1b present the estimated coalescent concentration required to form film at 0 °C of vinyl-acrylic latex, MFFT of 12 °C, and acrylic latex, MFFT of 20 °C. The estimated concentrations of low-VOC coalescents required to form film at 0 °C were close to the one of Coalescent A. These MFFT results indicate that all low-VOC coalescents have high affinity6 to the polymeric phases of the latexes investigated in this work. 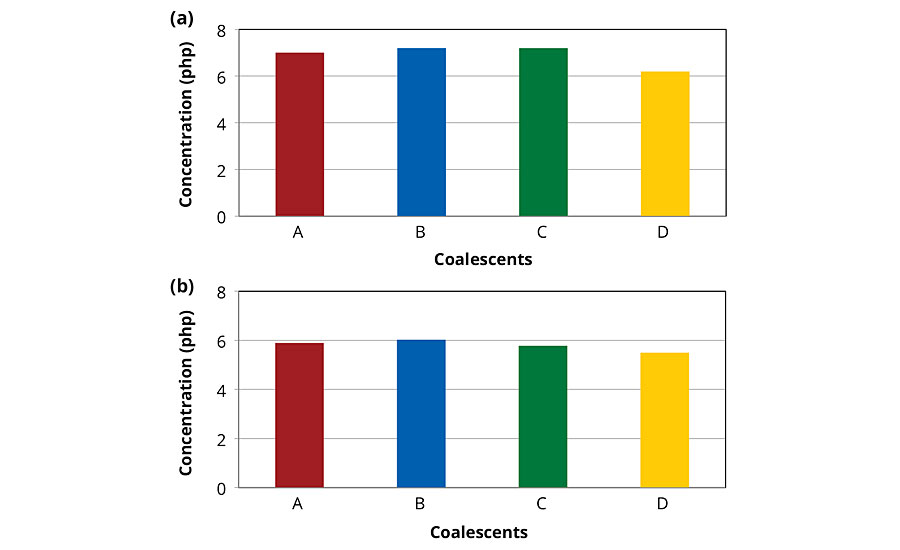 The MFFT evaluation is often used for predicting the efficiency of a coalescent to assist the formation of continuous and transparent latex films at a given temperature. Usually, this occurs in Stage 2, considering the accepted mechanism for latex film formation.3,4

In the industrial world, as Stages 2 and 3 can occur simultaneously, it is a common simplification to assume that the transparent and homogenous latex films obtained at temperature above their MFFT are coalesced and leveled. Due to this, there is a need for complementary evaluations that allow understanding film features on a microscopic level as well as coalescent efficiency in assisting particle coalescence and film leveling. Based on this need, AFM microscopies of vinyl-acrylic and acrylic latex films containing 8 php of Coalescents A-E, formed on glass, dried for 3 days at 25 °C and 50 % of RH, were performed. 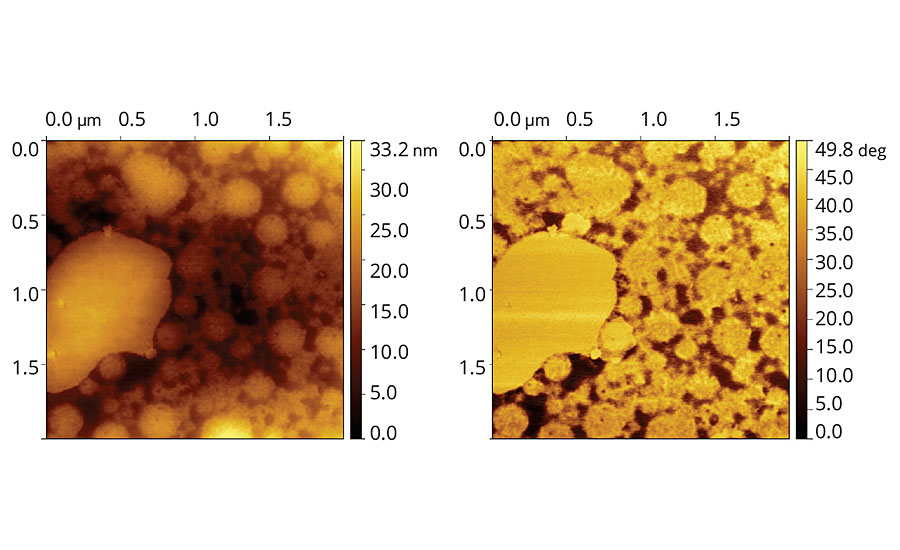 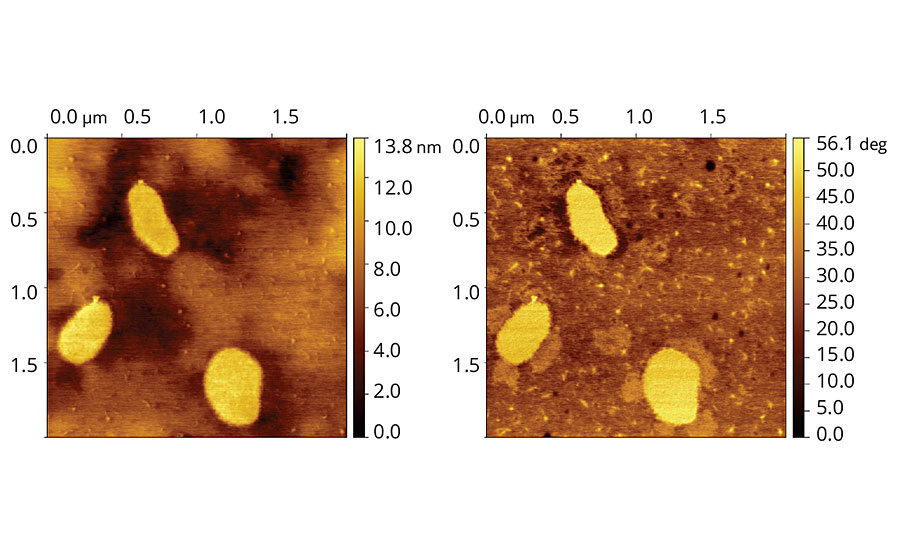 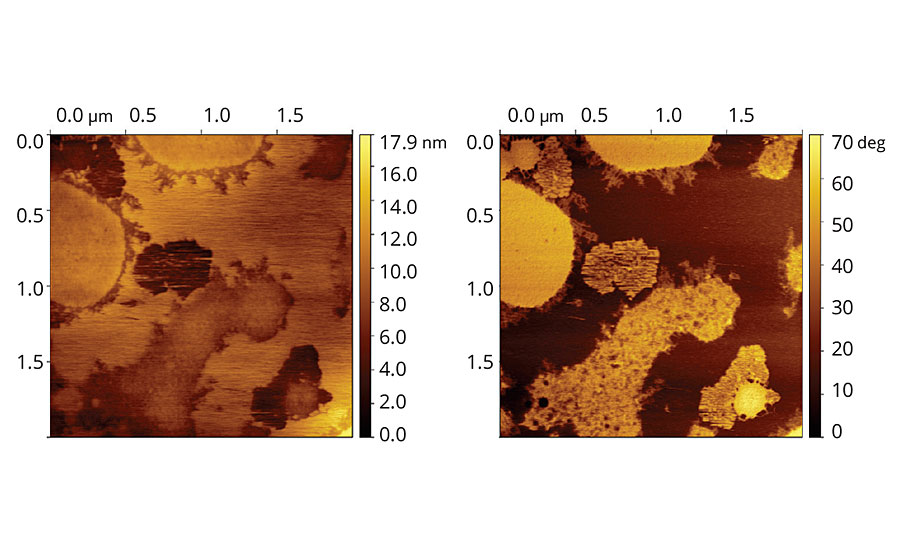 AFM image of vinyl-acrylic latex with coalescent D, Figure 5, shows considerably smooth and leveled film, although it is possible to identify some small particles along the film. Phase image also shows segregation of species with distinct viscoelasticities along the film. 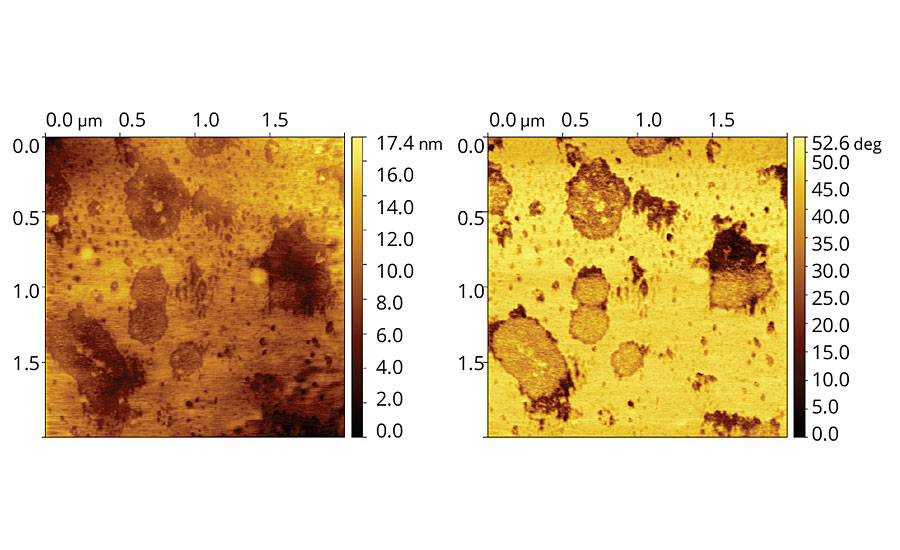 Figure 6 presents the topographic and phase images of films cast from acrylic latex with Coalescent A. The topographic images show that it is still possible to see particle domains, although the particles are very packed, and film roughness is low. The phase image also shows that it is possible to see particle limits, although domains with distinct phases are evenly distributed along the film. 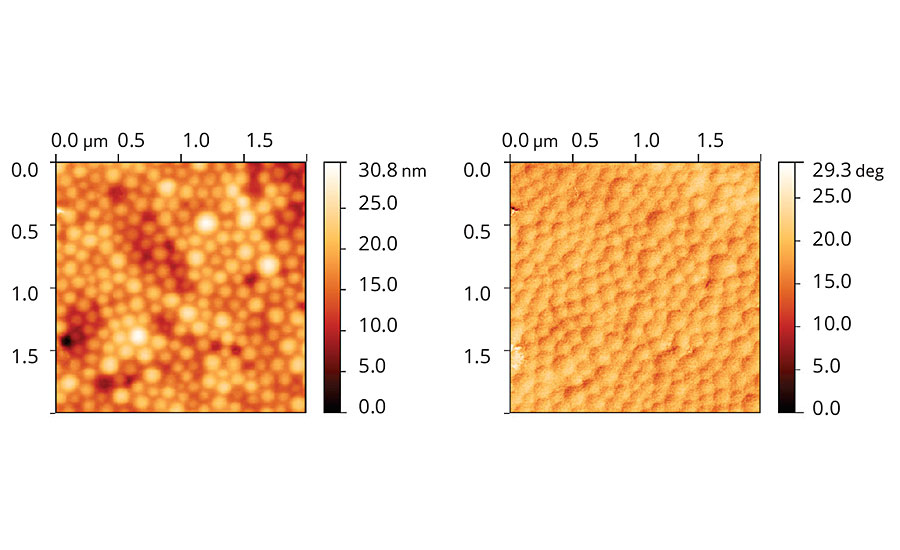 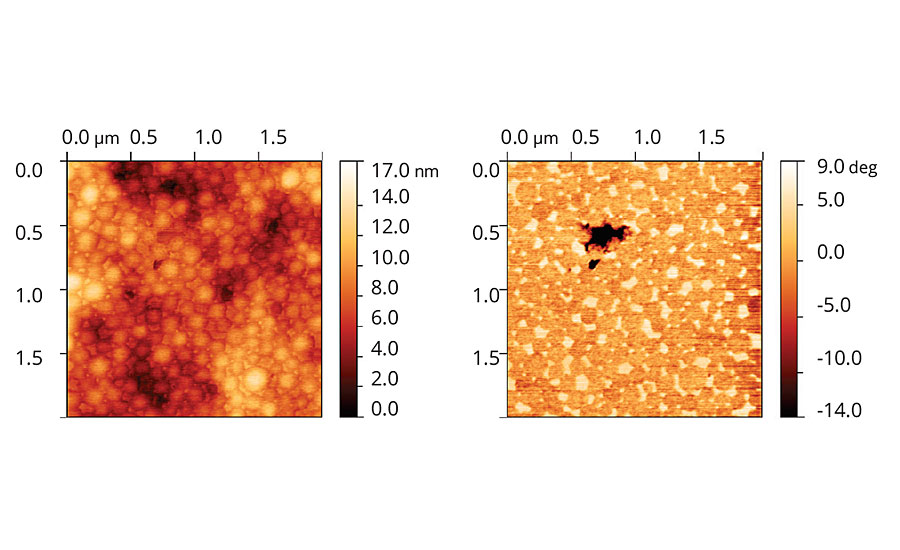 In the case of film containing Coalescent C, Figure 8, the AFM image shows no presence of particle domains and flatter film in comparison to the ones presented in Figures 6 and 7. However, in the phase image we can see two predominant phases: one phase that seems to be particle cores reminiscent from coalescence immersed in another continuous phase. 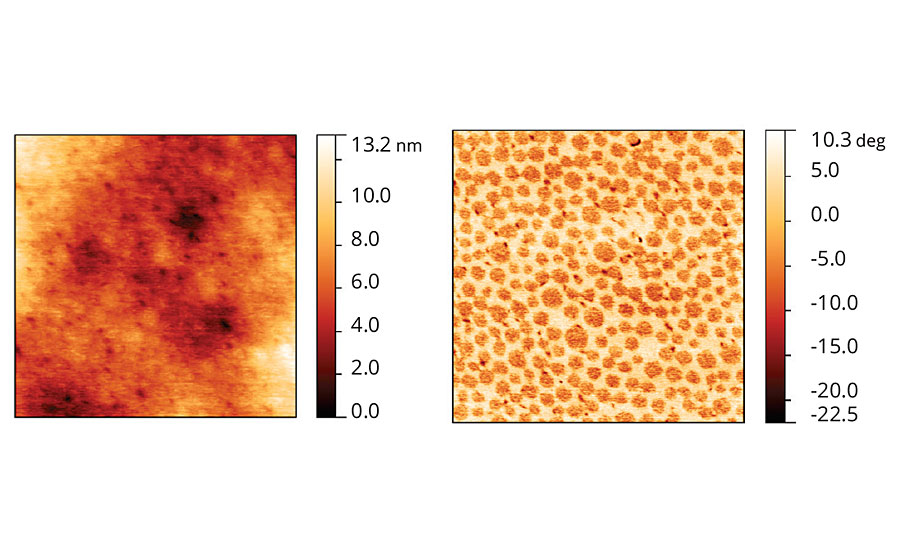 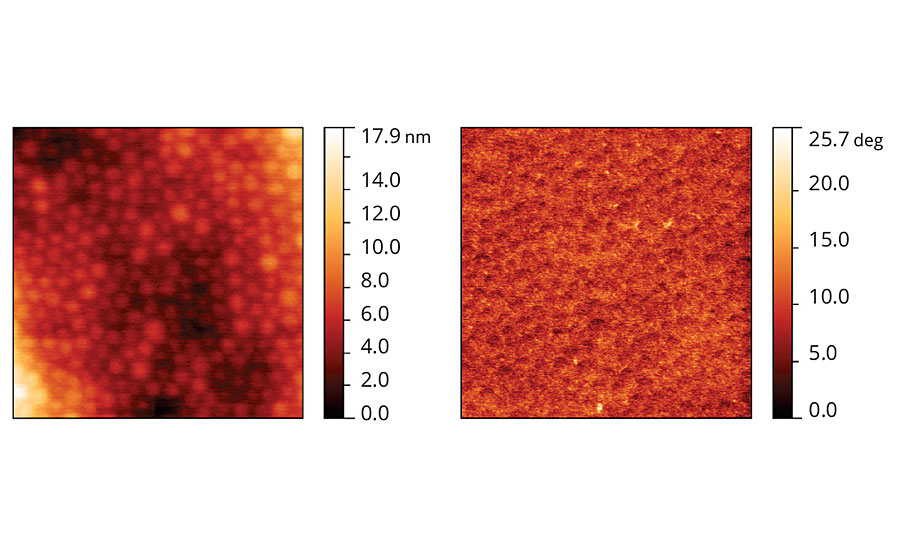 Further evaluations will be performed in order to correlate the features obtained from AFM micrographs with paint properties and apply this knowledge for developing paint formulations with optimum technical and environmental performance.

Case Study: the Future of R&D Through an Outsourced, Cloud-Based Data Platform