for Use as a High Slip Agent for Coatings and Leather

The market, especially the European market, has developed a tin sensitivity. In this article we report on the development of a tin-free aqueous silicone gum dispersion from early tin-based compositions. This class of additive has historically been very difficult to manufacture, especially without the tin condensation catalysts. These new compositions will be compared in several formulations against each other and the industry standard for their ability to reduce coefficient of friction (COF), and provide slip and mar resistance while maintaining coating properties.

These high-molecular-weight (MW) silicone dispersions are used in many coatings and leather treatment formulations to provide slip, and mar and stain resistance. The standard process, which includes catalysis with tin, is under strong regulatory pressure, especially in the EU, due to toxicity concerns of the residual tin compounds.

Variations in formulation and processing the high-molecular-weight silicone oil and silicone gum dispersions are evaluated against the commercially available product with the goal of achieving comparable or improved slip, dispersibility and stability.

Two control experiments were conducted in each case. The first is a comparable use level of the commercially available competitive product labeled COMP, and the second is no additive, labeled CONTROL.

Finally, the best results are obtained with 35A and 45A-B (Table 5), which are dispersions of a silicone gum with minor changes in the three formulations.

For the solvent-based acrylic clear coating, acrylic latex paint and 2K waterborne polyurethane clear coating, all tested panels were prepared by drawing down approximate 1 mL coating liquid on a 4” X 6.5” Leneta paper with wire-wound rod #30. The wet films were allowed to dry at ambient conditions for at least 4 days, except where otherwise noted.

Mar resistance was measured using a Sutherland 2000 Ink Rub Tester. We used the Dry Rub method with the following settings: 100 rubs and 84 rpm stroke speed. Rubbings were done using a 4 lb test block that was attached with a 2” x 4” nylon scrubbing pad. The panels were rated based on percentage change in gloss reading before and after the rubbing test. Rating 10 is the best; 0 is the worst.

With the initial formulation (Table 1), we find the performance of our first sample, labeled 40A, to be as good as or better than COMP in terms of gloss retention and COF reduction. However, compatibility in WB formulations is not nearly as good, as evidenced by the surface appearance. Further work focused on improving the dispersibility with particle size and stabilizer packages. 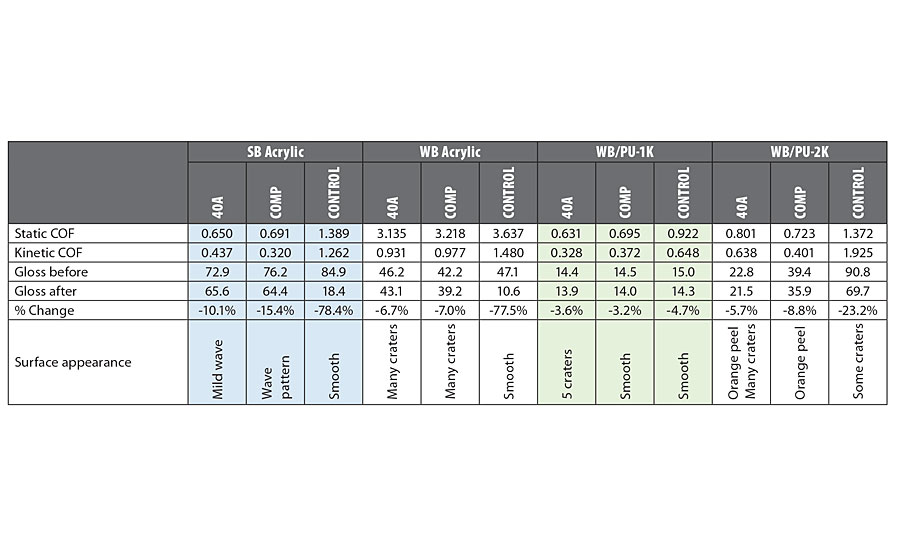 In the first variations, shown in Table 2, we see a similar result where physical properties are acceptable for 40A and 40C, but compatibility is not acceptable in any of the three variants. In fact, the deviations from 40A to 40B to 40C result in worse performance. 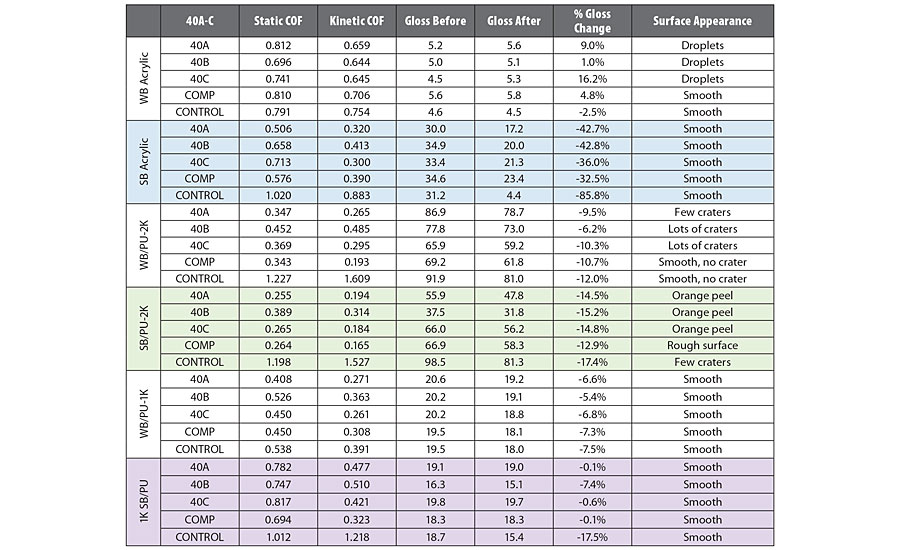 In this next set of variations, seen in Table 3, 40D, 40E and 40F show at least comparable and often better performance compared to the competitive offering. These samples are also much closer in compatibility in most formulations. However, significant differences in appearance are still seen in the 2K PU formulations. 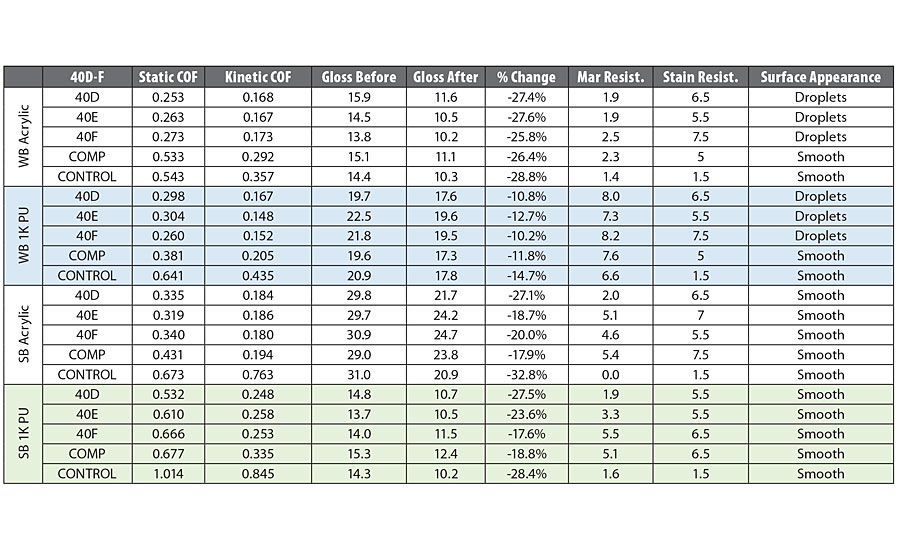 In this series of 40G-J, Table 4, we again see the now familiar pattern. Physical properties are very similar, and these variants are very close in compatibility. 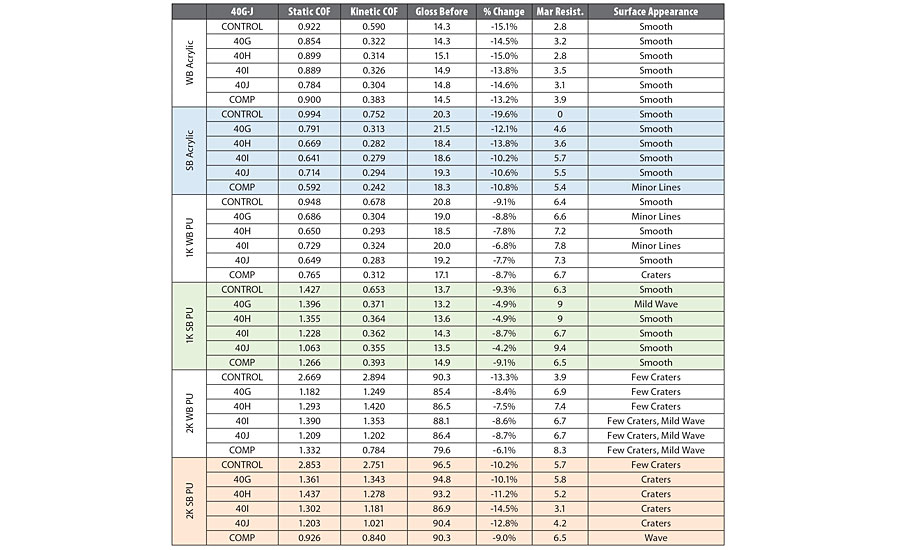 In the final series, seen in Table 5, Samples 35A, 45A and 45B are shown. These use an ultrahigh-molecular-weight silicone gum and no tin catalyst with unique dispersing packages. The two samples denoted 45A and 45B show especially good compatibility as indicated by leveling and lack of defects even over the competitive material in the SB test. Kinetic COF is as low as the samples labeled COMP. 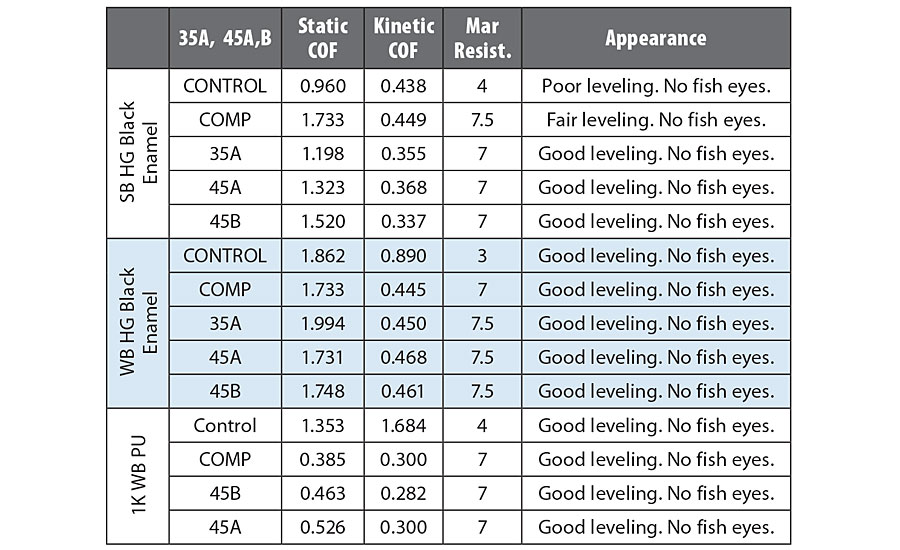 As we progressed from the earliest structural variation we found it was straightforward to match the COF reduction and performance properties of the commercial silicone gum dispersions. Even compatibility in SB formulations was good in the early samples.

The trick was to improve waterborne compatibility, which we eventually accomplished primarily by altering the dispersion packages. In doing so, we found comparable, or in some formulations, superior performance to the target product. 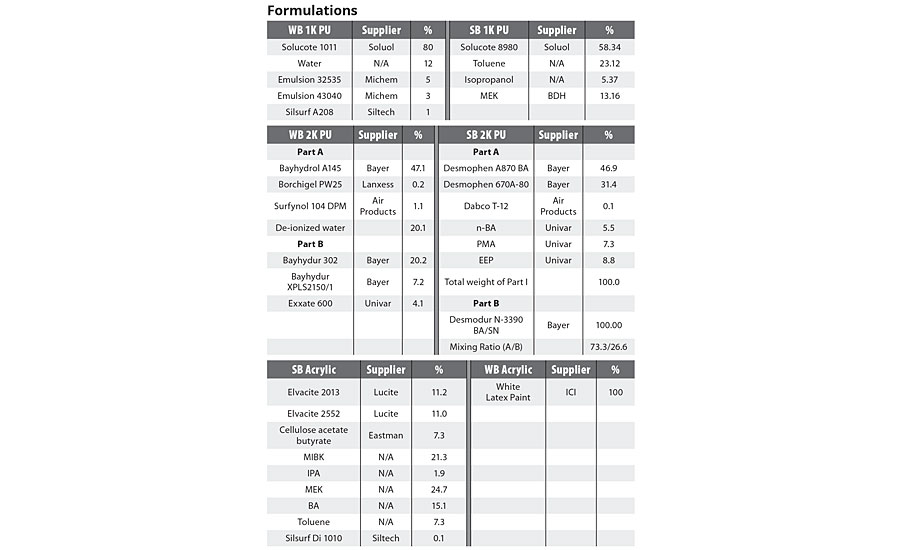 This paper was presented at the 2017 Waterborne Symposium. For more information, contact Bob Ruckle at Robert@siltech.com.

Handbook of Adhesives and Surface Preparation