for Increased Hardness of Waterborne Coatings

Dibenzoate glycol esters have been used extensively as plasticizers and coalescent film-forming aids for many years. The advantages of dibenzoates have been discussed previously, but they include: low vapor pressure (in the range of 10-6-10-8 mmHg) resulting in low VOC content, appropriate solubility parameters for applications with polar polymers such as PVC and acrylates, biologically biodegradable, and environmentally safe for food contact applications in adhesives and coatings.1 Previous research presented at the Waterborne Symposium has shown the usefulness of these molecules as film-forming aids for architectural coatings in both interior and exterior applications.2,3 Dibenzoate glycol esters are low-VOC coalescent aids, and their performance advantages in architectural coatings include increased volume solids, gloss and scrub resistance.

This research seeks to expand upon hardness increases found in previous coatings research for direct-to-metal applications and use that concept as a formulary tool for architectural coatings.4 In this previous work dibenzoates and dipropylene glycol n-butyl ether (DPnB) were blended in 1:1 ratios, and the resulting hardness development in a styrene acrylic binder exceeded that of formulations containing 2,2,4-trimethyl-1,3-pentanediol monoisobutyrate (TMPDMIB) while containing lower levels of VOC.4 This result was interesting, and warranted further exploration of this performance aspect in architectural coatings.

Hardness development in waterborne coatings has been taught to be critical to block resistance and dirt pickup. The overuse of coalescing aids in a formulation can exacerbate dirt pickup through excessive tackiness of the surface, and the formulation chemist would be wise to optimize use levels. Hardness can be a desirable attribute for several reasons, and this research focuses on evaluating hardness development using various ratios of DPnB with dibenzoates. DPnB is 100% VOC content as evaluated by EPA Method 24. DPnB is a hydrophobic ether with partial solubility in water (4.5 wt%), but its partition coefficient allows DPnB to partition well to the polymer phase to aid in film formation. Using varying ratios of DPnB to dibenzoate, this research will focus on properties resulting from two different binder formulations.

The first resin binder was a higher-Tg styrene acrylic (44 °C) suitable for exterior/interior high-gloss enamel architectural applications. The second binder was a mid-Tg vinyl acrylic (19 °C) with high scrub resistance properties suitable for exterior/interior architectural applications. Both of these binders were formulated as a semigloss coating with a pigment volume concentration of 25%. Hardness development was measured using Koenig for the harder styrene acrylic and Persoz for the softer vinyl acrylic. In addition to hardness development, gloss, block resistance and scrub resistance were also evaluated. By formulating with DPnB in combination with low-VOC dibenzoate esters, some performance properties of coatings can be increased while keeping VOC content at lower levels in comparison to conventional coalescent formulations containing TMPDMIB.

ASTM E70 – The pH of the coatings were measured using a Beckman 310 pH meter with general-purpose electrode. The coatings were pH adjusted to within 8.5 to 9.5 pH using ammonium hydroxide (28%).

ASTM D562 – Initial Stormer viscosity was measured using a Brookfield KU-2 viscometer with paddle geometry. Rheology modifier was added to adjust initial viscosity to within the range of 90-105 KU.

ASTM D2486 – Coatings were applied using a 7-mil Dow applicator bar to a Leneta P121-10N chart and dried at 23 °C at 50% RH for 7 days. The scrubbability was measured using a Gardco D10 Washability and Weartester. A 10-mil shim was employed with abrasive media (SC-2). Initial failure was recorded, and complete failure defined as a continuous thin line across the shim.

ASTM D4946 – Coatings were applied using a 3-mil Bird film applicator to a Leneta form WB chart and dried in an environmentally controlled room at 23 °C and 50% relative humidity for 7 days. Samples were constructed from 1.5-inch squares and oriented coating surface to coating surface with a 1 kg weight placed upon a number 8 stopper at ambient temperature or 120 °F for 30 min. The samples were then allowed to equilibrate at room temperature for 30 min and were then evaluated through “blind” testing to remove bias.

ASTM D2243 – Coatings were applied using a 3-mil Bird film applicator to a Leneta form WB chart and dried in an environmentally controlled room at 23 °C and 50% relative humidity for 7 days. Gloss measurements were conducted in triplicate using a Gardco micro-Tri-gloss meter model 4446.

ASTM D4366 – Coatings were applied using a 3-mil Bird film applicator to aluminum A36 Q-PANEL and dried in an environmentally controlled room at 23 °C and 50% relative humidity. Hardness was measured using a Gardco Koenig and Persoz Hardness Rocker with the respective pendulums for each test. Hardness values were reported as the average of three measurements. 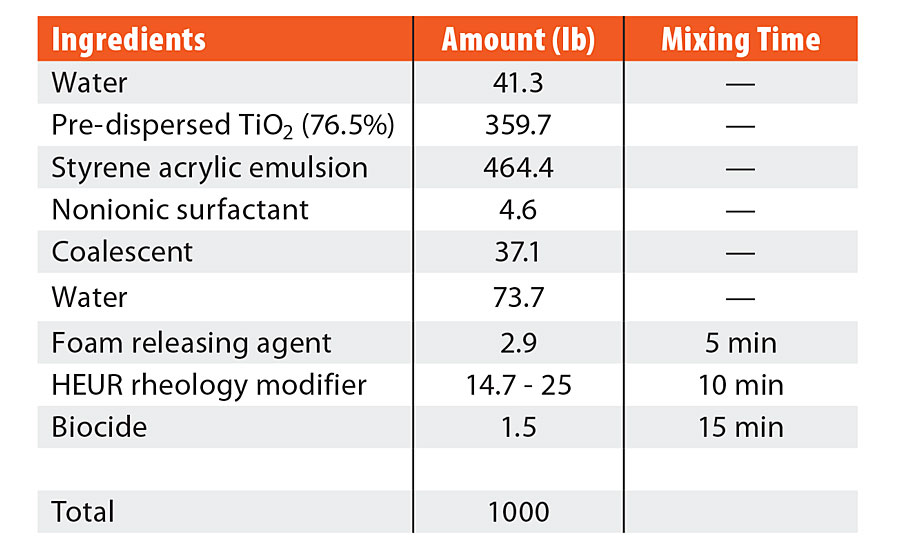 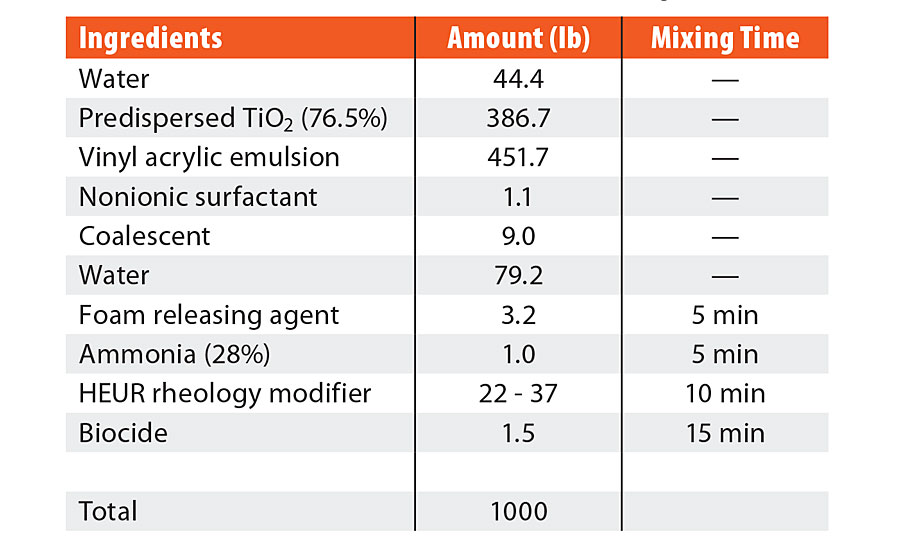 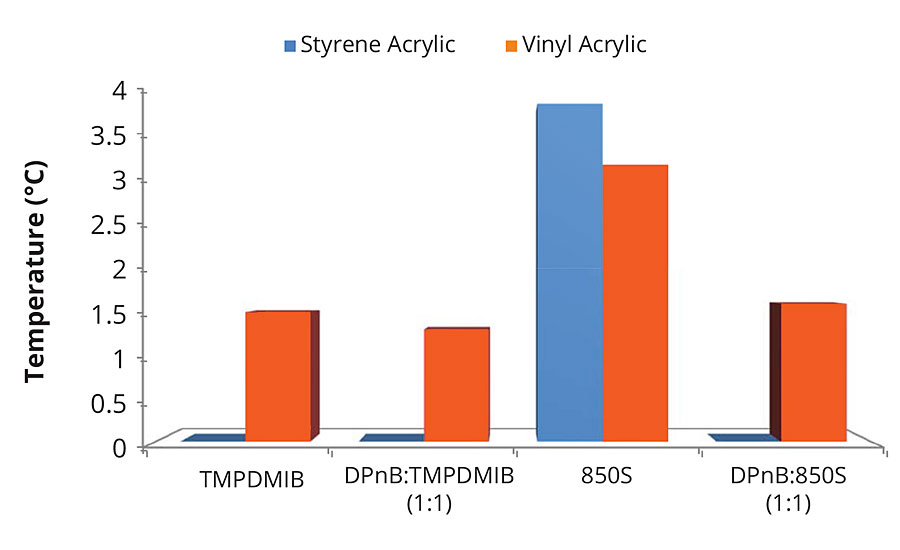 The coating formulations were created with the ingredients listed in both Table 1 and Table 2. The ingredients were added sequentially, as listed in the table, with a dispersion blade mixer head at an appropriate speed to maintain an adequate vortex (approximately 700 rpm). Six coalescent platforms were evaluated for each formulation: TMPDMIB, DPnB:TMPDMIB (1:1), 850S (blend of diethylene glycol dibenzoate and dipropylene glycol dibenzoate), DPnB:850S (1:5), DPnB:850S (1:2), and DPnB:850S (1:1). Dipropylene glycol n-butyl ether was considered to be an equal contributor to the total coalescent in the formulation, thus the sum of the varying ratios of coalescent equaled the coalescent weight listed in Table 1 and Table 2. In each formulation, DPnB was added prior to the corresponding coalescent. After addition of the foam-releasing agent, mixing times were used to promote complete dispersion and equilibrium before the next addition, as listed in Table 1 and Table 2. The pH was adjusted with ammonium hydroxide to be within 8.5 to 9.5 and was found only to be necessary for the vinyl acrylic formulation. The rheology modifier was added to adjust the Stormer viscosity to within range of 90 to 105 KU. Increasing amounts of rheology modifier were needed as additional DPnB was added to the formulation, with the range listed in Table 1 and Table 2. The rheology modifier was a hydrophobically modified ethoxylated urethane resin (HEUR) type and DPnB may have caused inhibition of the hydrophobically associated network since DPnB is partially water soluble (4.5 wt%). After formulation, the coatings were allowed to equilibrate for three days prior to drawdowns and physical testing. 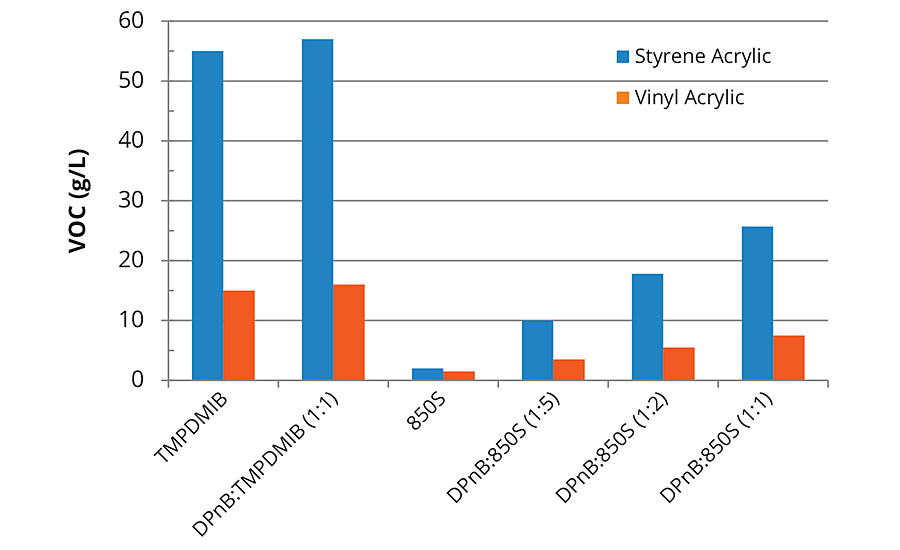 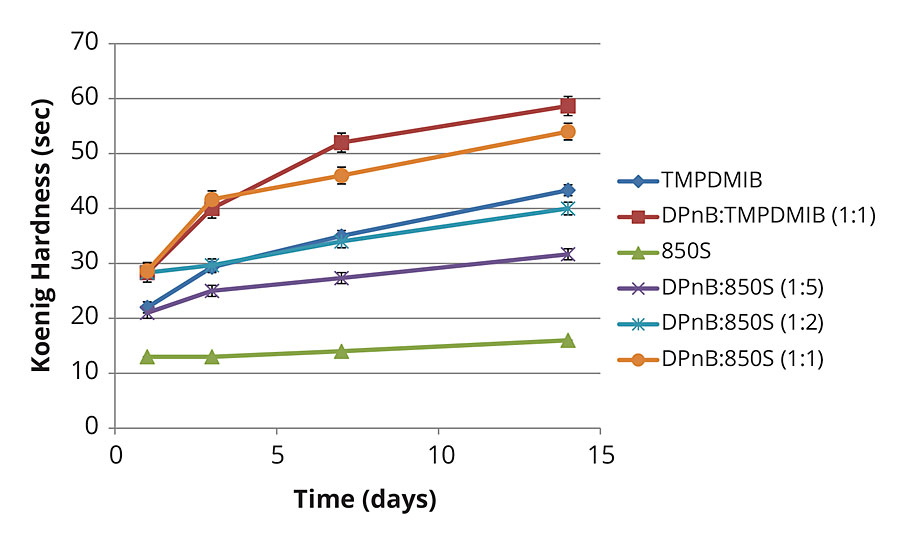 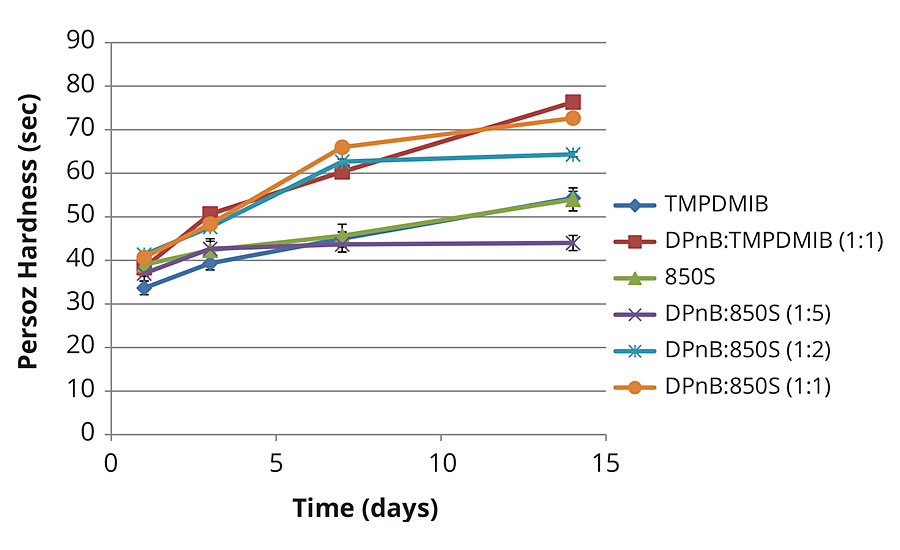 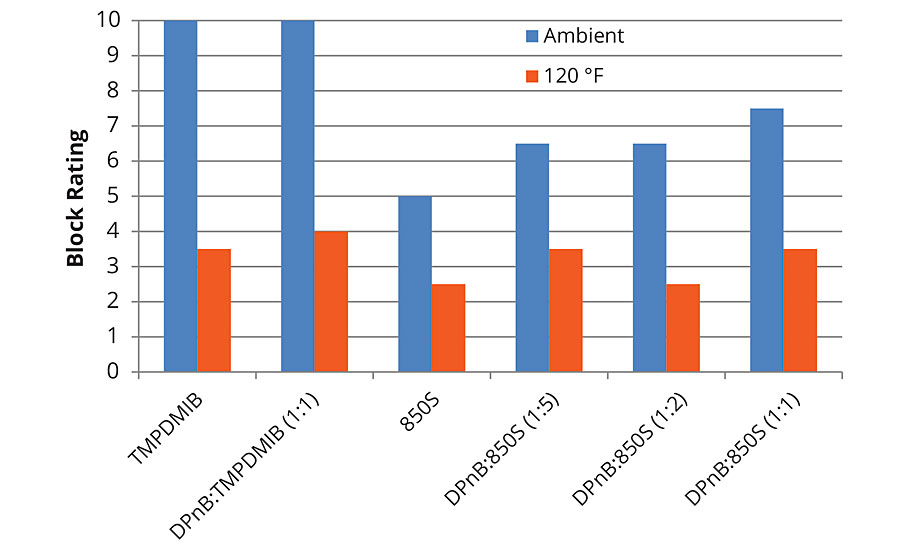 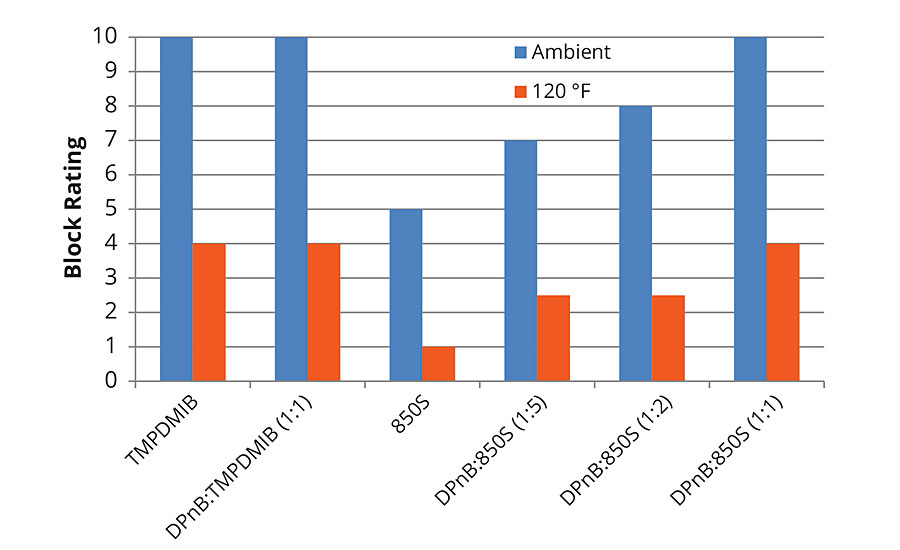 Block resistance of the softer vinyl acrylic semigloss was poor in each of the formulations tested, with the dibenzoate blend 850S being on average better than the other examples as shown in Figures 7 and 8 for 1-day and 7-day measurements. For 7-day evaluations, the DPnB:TMPDMIB was equal to 850S taking into account ambient and 120 °F tests. In the softer vinyl acrylic, there was no correlation between hardness development and block resistance as evidenced in the styrene acrylic. 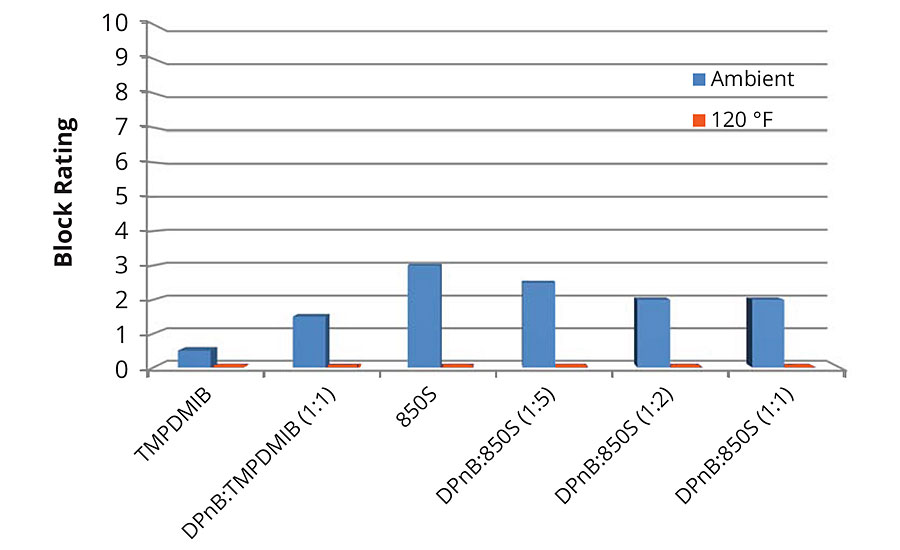 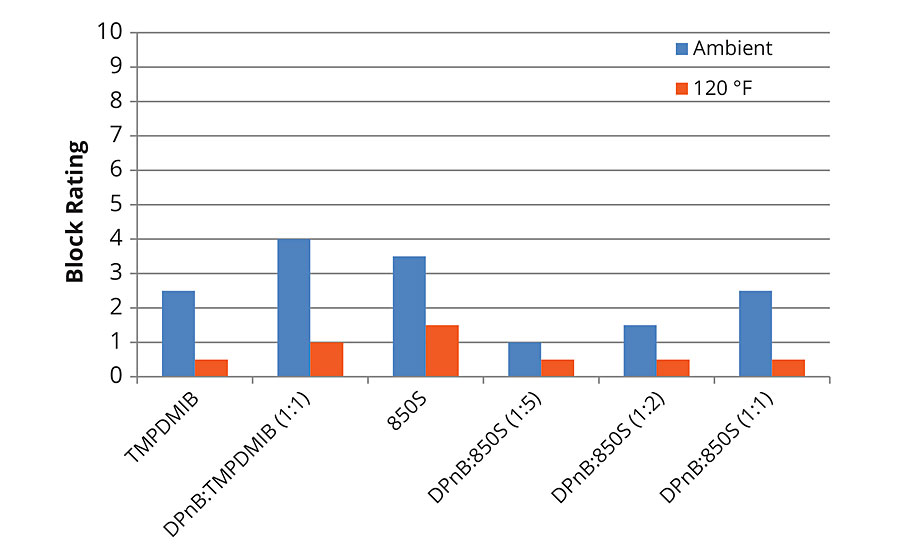 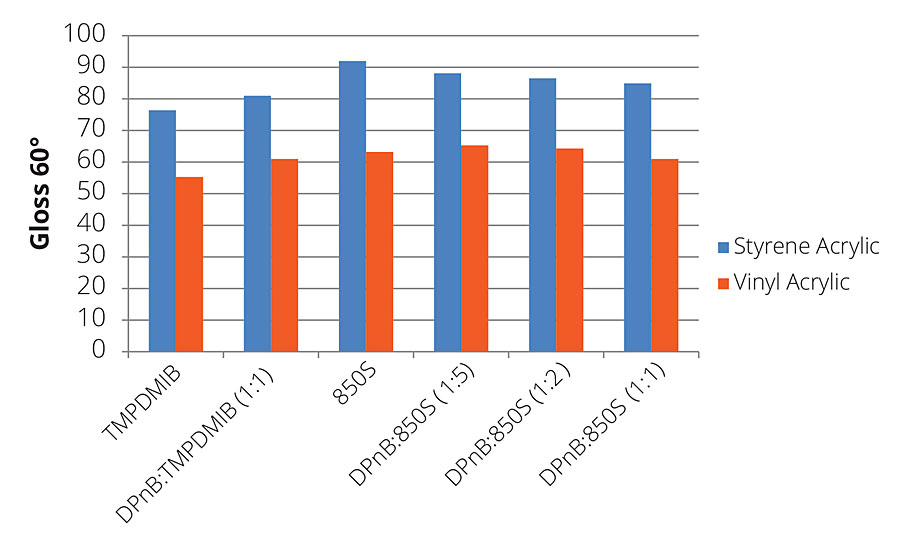 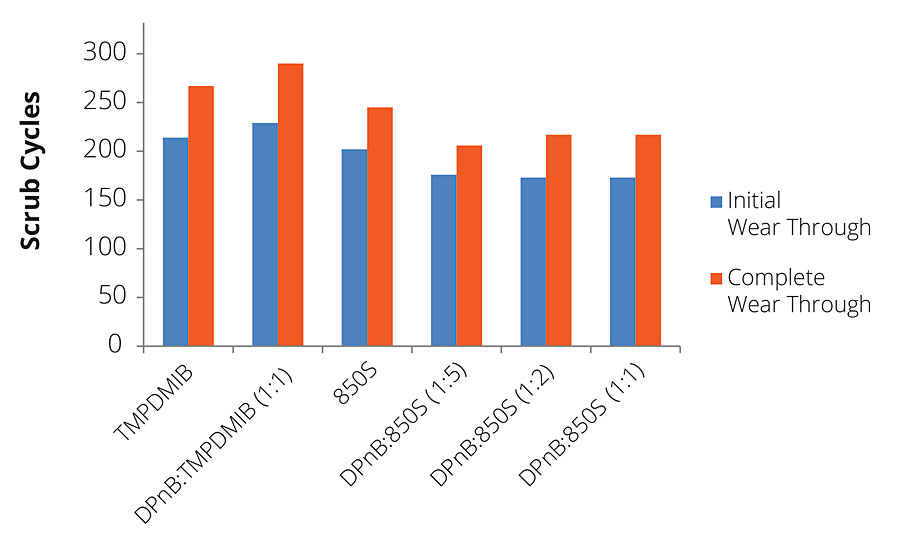 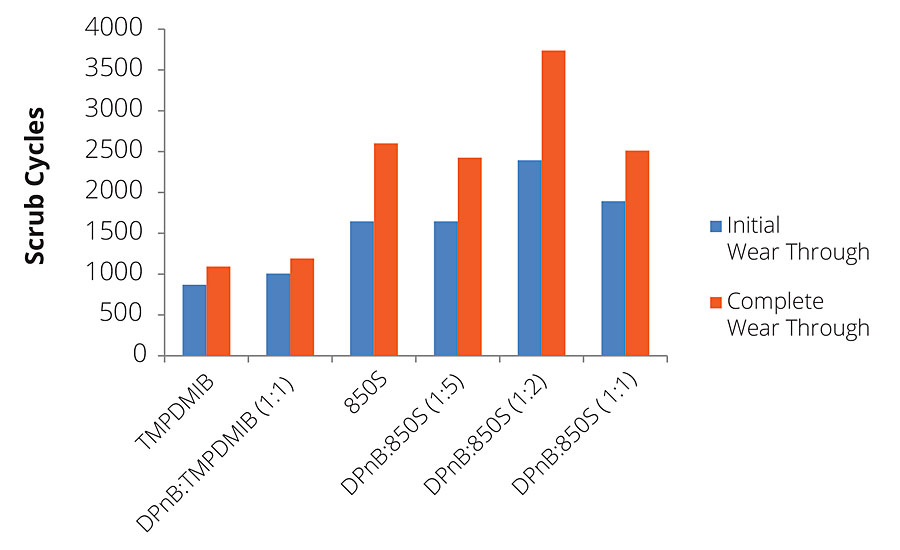 Architectural low-VOC coatings can be formulated with dibenzoate glycol esters to have increased hardness, block resistance, gloss and scrub resistance. The low VOC content of the dibenzoates allow formulators freedom of design to include higher-VOC components in their coatings, achieving various properties that are critical to specific applications. This research focused on only two binders in a semigloss model formulation to illustrate coalescent polymer properties, but the concept presented here would work with different polymers and pigment volume concentrations. Formulating with DPnB and 850S allowed higher hardness development, higher block resistance, maintained higher gloss values and significantly increased scrub resistance in the vinyl acrylic.

For more information, e-mail Stephen.Foster@emeraldmaterials.com. This paper was presented at the 2017 Waterborne Symposium.