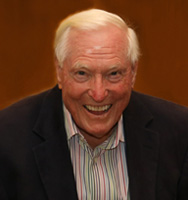 The 2016 and 2017 WCS Samson-Adler Distinguished Service Awards are presented this week at the Symposium. The 2017 award will be presented today to Joseph King. Joe was born in Kalkaska, Michigan. He was an active employee of Pacific Coast Chemicals for 25+ years until he retired in 2015 from his Salesman position at 94 years old. He currently resides in Southern California. He has contributed almost 70 years to the paint and coatings industry and is still active in giving his knowledge and leadership to our industry. Joe has a very long history as a teacher and a mentor to many that know him. Some of Joe’s accomplishments are: National Sales Manager and Sr. VP at Mc Closky Corporation; General Manager of Bauer Coatings and Chemical Division of Whittaker Corporation; Sales Manager and Technical Director at Reichhold Chemical Corp; Technical Director at General Paint Corp. He graduated from the University of Michigan with a Bachelors and Master’s Degree in Chemical Engineering. He also earned a Master’s Degree in Business Administration from the University of Southern California. He served in the U.S. Navy as an Engineering Officer on a Destroyer and is a World War II Veteran.