Corrosion of steel structures in marine environments is a problem that has to be considered during both design and maintenance. Offshore operators are currently looking to extend the design life of offshore facilities, structures and components to improve the affordability, and to increase their availability in later years of operation. To reach the above objectives, many paint manufacturers have put in the effort to study long-term anticorrosion performance of different protective coatings in global offshore environments.

According to ISO 20340, a set of minimum requirements for protective coating systems in offshore environments has been specified. For a nonzinc-rich primer system, a minimum of three coats and a nominal dry film thickness of 350 µm are required for areas exposed to atmospheric category CX (offshore).1 One popular protective coating for offshore structures is the use of a high-solids, glass flake-reinforced epoxy coating to reduce gas and moisture vapor diffusion through coating films. One key requirement of such coatings is to provide a high film build of 400-800 µm per single coat. However, it is challenging to formulate a high-solids, high-build epoxy glass flake coating with good sag control throughout its pot-life. The rheological properties of high-build epoxy coatings tend to deteriorate drastically over a period of time upon addition of polyamine hardener thickened with conventional hydrophilic fumed silica. This may impose a problem in the on-site application, where a delay in spray application after mixing the epoxy base (Part A) and amine curing agent (Part B) may cause the coating to sag at the specified film thickness.

Conventional fumed silica is widely used in the coatings industry as a rheological additive. Its surface is covered with silanol (Si-OH) groups, making it hydrophilic.2 Although hydrophilic fumed silica can effectively enhance the sagging performance by the formation of hydrogen bonds between silanol groups on adjacent silica units, the generation of increasing hydroxyl groups upon mixing of epoxy base and amine hardener can break the hydrogen bonds between silica, resulting in loss of thixotropic and sagging properties. Hence, the rheological property of hydrophilic fumed silica depends heavily on the liquid medium and is less capable of thickening in polar organic liquids.3

To overcome the deterioration of the rheological network over the pot life, hydrophobic fumed silica is introduced into the coating. Chemical surface modification of silica with hydrophobic chains (i.e. octyl, dimethyl) can minimize the solvation effect due to increasing polarity during the curing process. Moreover, hydrophobic grades are used to increase water resistance and thus enhance anticorrosion performance.

The goal of this work was to investigate the interactions behind the deteriorating effect of the rheological network with conventional hydrophilic fumed silica and to optimize the rheological properties (i.e., sag index, settlement during storage and levelling performance) of high-solids, high-build epoxy glass flake coatings with the “right” combination of rheology additives. Moreover, the anticorrosion performance of hydrophilic and hydrophobic fumed silica was also evaluated.

A wide variety of rheology additives was selected and formulated into eight different variants (V1A to V4A; V1B to V4B). These include hydrogenated castor oil, urea derivatives, mixed mineral thixotrope and polyamide wax, where 1.0 wt% each was formulated into different Part A (base) variants. On the other hand, 2.5 wt% each of hydrophilic and hydrophobic fumed silica was added into two different Part B (hardener) variants. A summary of various combinations of base and hardener is shown in Table 1. 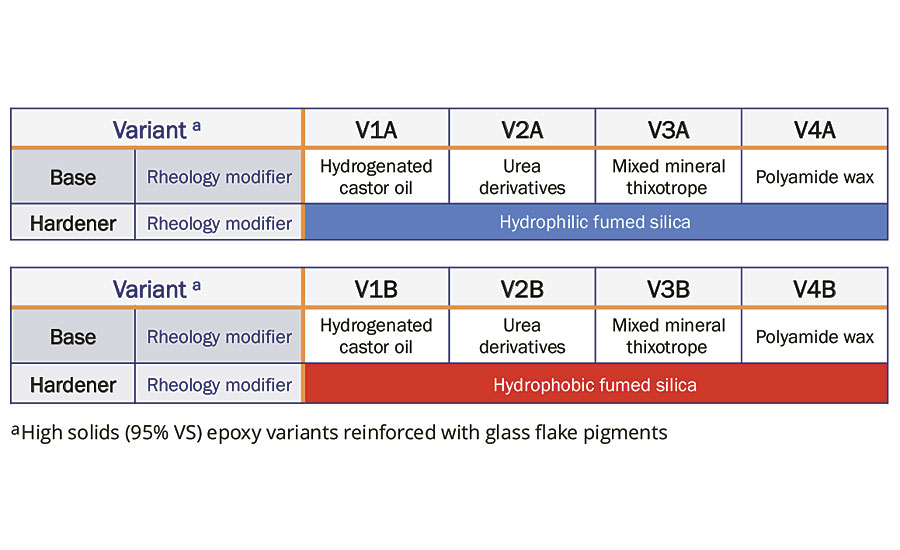 Storage performance was evaluated by measuring the change in pigment settlement over a period of three months at 50 °C storage conditions. Paint settlement was determined based on ASTM D869-85, and the degree of settling is given on a rating scale from 10 (good) to 0 (poor).4

Leveling tests were performed on 300 mm X 300 mm tin plates using the Leneta leveling test draw-down blade. The leveling of the paint variants was assessed based on the scale of 0 (poor) to 10 (good) by comparison with the Leneta Draw-Down Levelness Standards.5

Evaluation of anticorrosion properties was focused on the type of fumed silica: hydrophilic and hydrophobic. These materials differ quite significantly on silica’s surface and, therefore, it would serve to understand the effect of different structures on the rheological properties and anticorrosion performance in high-solids epoxy glass flake coatings. V1A and V1B were selected to compare the anticorrosion properties of hydrophilic fumed silica and hydrophobic fumed silica. Both variants were applied on blasted steel panels (surface profile of 50 µm) by an airless spray gun. The coated panels were allowed to cure for seven days under normal ambient conditions before subjected to fresh water immersion (tap water), salt-water immersion (3.5% NaCl), salt spray and humidity chamber. After 12 months of monitoring, the panels were evaluated by visual assessments (ISO 4628) and pull-off adhesion (ISO 4624). The pull-off adhesion test (PAT) was conducted using a PosiTest AT-M (manual) Set and 3 X 20 mm dollies for each panel. The test results of PAT were assessed by the type of fracture (refer to ISO 4624:2016 section 8.5.2) and expressed the results as megapascal (MPa).6

Initial exploration focused on the change in viscosity over a period of 35 minutes upon mixing base and hardener of different rheology additives (Figure 1). From the plot of viscosity against time, the viscosity of all variants decreases over a short period of time. However, variants thickened with hydrophilic fumed silica (V1A, V2A, V3A and V4A) were observed to have a large decrease in viscosity as compared to variants thickened with hydrophobic fumed silica (V1B, V2B, V3B and V4B). This showed that the rheological networks formed by hydrophilic fumed silica degraded significantly during the curing process of epoxy and amine, especially for fast-reacting products. 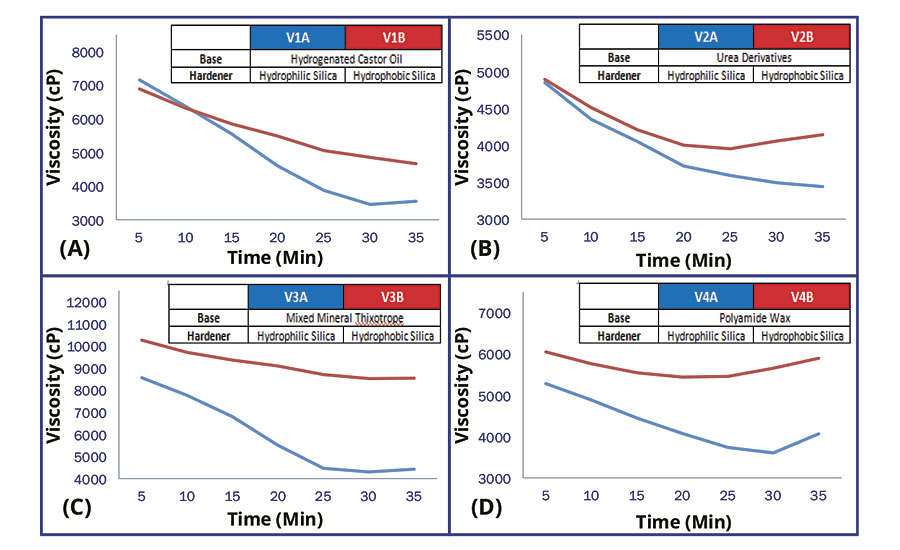 FIGURE 1 » Viscosity change upon mixing base and hardener.

To further understand the rheological network of hydrophilic fumed silica, sagging index was determined at 5, 15, 25, 35 and 45 minutes upon mixing epoxy base and amine hardener for variant V1A, V2A, V3A and V4A. It was observed that sag resistance of variants thickened with hydrophilic fumed silica starts to deteriorate after 15 minutes of mixing epoxy base and amine hardener, as shown in Table 2. Due to the chemical nature of urea-based and polyamide-based rheology modifiers in V2A and V4A respectively, their interaction with amine hardener will lead to reduced sag resistance. Although V1A and V3A showed excellent sag resistance on vertical surfaces initially – up to 1000 µm – they are not able to maintain a consistent sag resistance throughout the short pot life of 50 minutes. Therefore it poses a challenge for applicators to complete the spraying application in less than 10 minutes upon mixing base and hardener. 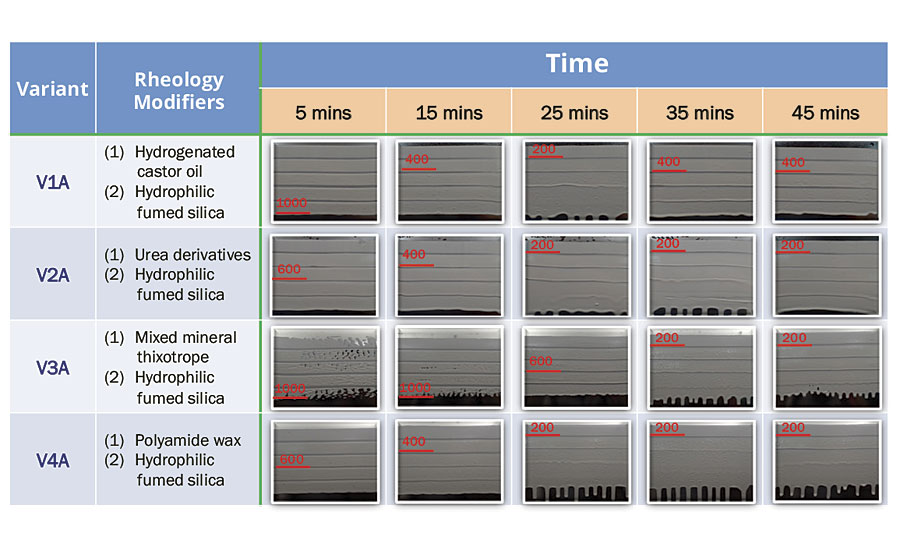 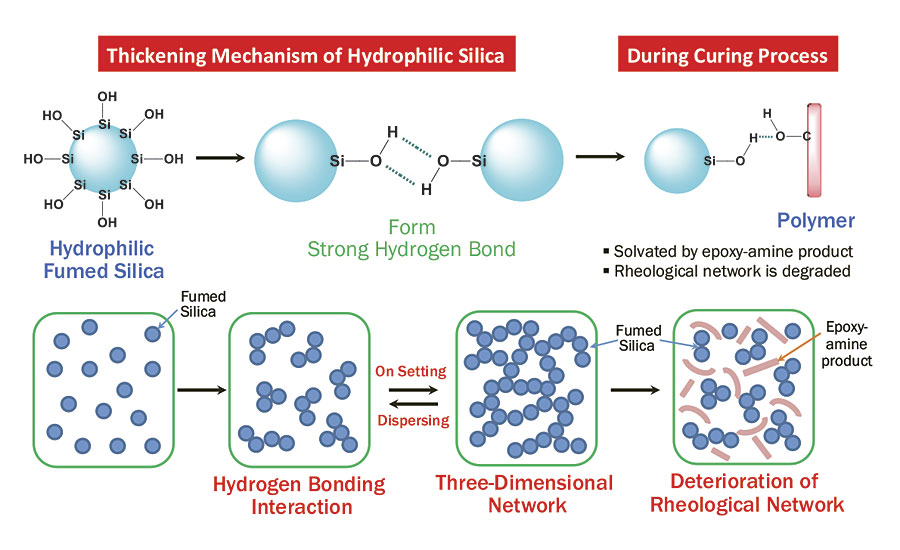 To overcome the deteriorating sag resistance of high-solids epoxy glass flake coating, the silica surface of the rheology modifier can be systematically altered from hydrophilic to hydrophobic by replacing a portion of the original silanol (Si-OH) groups with nonpolar alkyl chains. In this experiment, the selected hydrophobic fumed silica is produced by surface treatment of fumed silica with trimethoxyoctylsilane (approximately 48% surface substituted), and it is evaluated in V1B to V4B (Table 3). Interestingly, variants thickened with hydrophobic fumed silica were observed to demonstrate enhanced sag resistance throughout the working pot life. This is because the primary thickening mechanism of hydrophobic fumed silica is by a nonpolar or hydrophobic interaction between silica particles instead of mainly hydrogen bonding. The nonpolar octyl chains can sterically shield the silanol group of silica from interaction with newly formed hydroxyl group during the curing process. Thus it is less affected by newly generated epoxy-amine adducts and is able to enhance sag resistance throughout the working pot life. 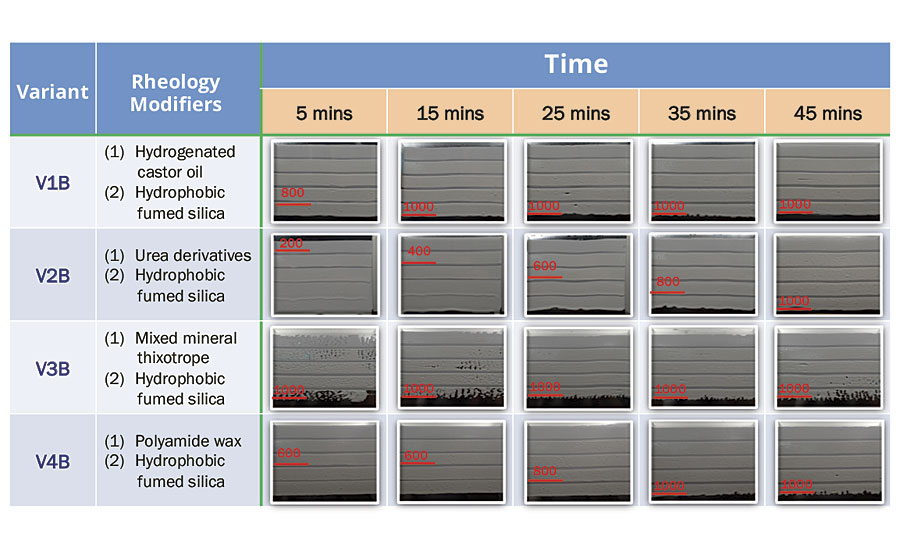 In order to determine the best combination of rheology additives in high-solids epoxy glass flake coating, other paint properties such as sedimentation and leveling were conducted based on the rating scale of 0 (poor) to 10 (excellent). A summary of evaluation results based on rheological properties is shown in Table 4.

From the results in Table 4, the polyamide-based rheology modifier is the least effective in preventing hard settlement in epoxy glass flake base formulation upon 3 months storage at 50 °C. Although 1.0% mixed mineral thixotropes (MMTs) provides good sag resistance and control of settling, it does not provide good flow and leveling properties of the paint. This could be due to the high amount of MMTs added to the formulation. 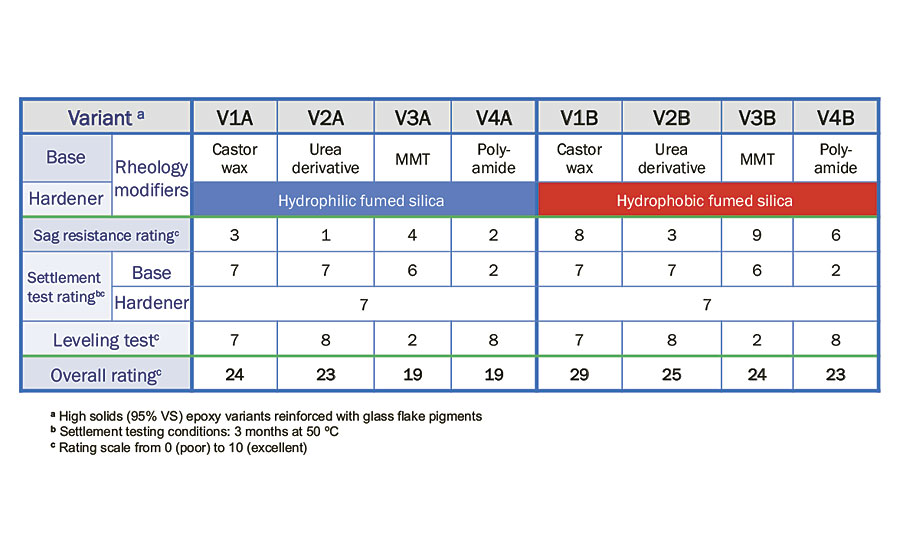 Upon these results, it was concluded that V1B, a combination of 1.0% hydrogenated castor oil and 2.5% hydrophobic fumed silica, provides optimum rheological properties for high-solids epoxy glass flake coatings.

Besides enhancing the sag resistance of a high-solids epoxy-amine system throughout its working pot life, hydrophobic fumed silica can also improve the water resistance of the coating. To evaluate the anticorrosion effect on protective coatings, four accelerated corrosion tests (fresh water immersion, salt water immersion, humidity and salt spray) were conducted on coated panels of V1A and V1B. After 12 months of immersion tests, PAT was performed to determine the adhesion strength of the coating films on steel panels. Coated panels of V1B were observed to be associated with cohesive failure of the first coat, and the difference in PAT results (before and after immersion) seemed to be smaller as compared to coated panels of V1A (Table 5). Therefore, it was evident that hydrophobic fumed silica in V1B does provide enhanced anticorrosion performance to the final coating film. 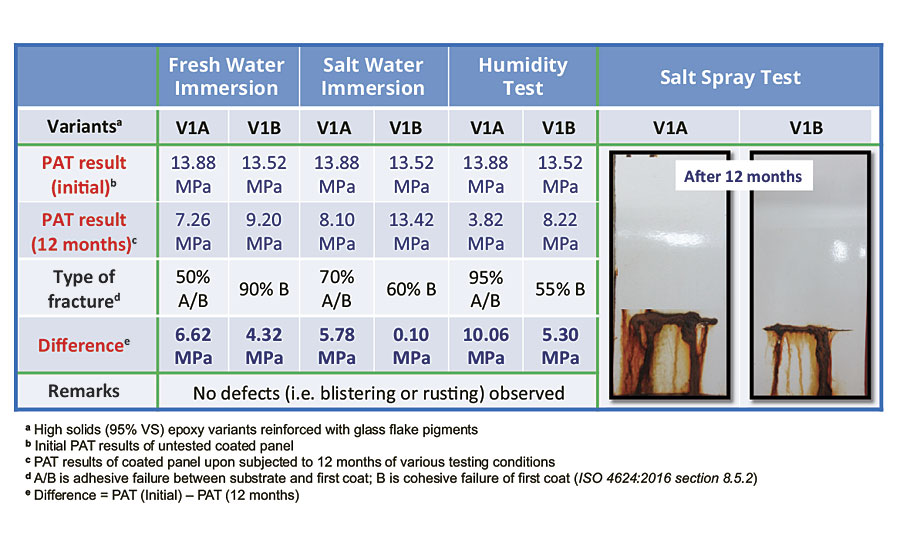 Although both hydrophilic and hydrophobic fumed silica have proven successful in the rheological control of conventional epoxy coatings, there are some limitations of hydrophilic silica in high-solids epoxy glass flake coatings. Variant V1A to V4A thickened with hydrophilic fumed silica led to a significant drop in sagging performance on the system in which it was being investigated over a period of 45 minutes.

From the rheological properties evaluation of various rheology additives, it was concluded that V1B with a combination of 1.0% hydrogenated castor oil and 2.5% hydrophobic fumed silica can maintain and improve sag resistance throughout the working pot life of high-solids epoxy glass flake coatings.

The properties that hydrophobic fumed silica provide to epoxy coating formulations lend themselves to high-build formulations or formulations that require high sag resistance. Thus, hydrophobic silica is generally preferred; not just because of the superior rheological properties in most cases, but also because it imparts additional corrosion protection.

The results of this study can offer significant performance gains in formulating high-solids, high-build epoxy coatings. This is particularly important in regions where VOC emissions must be reduced significantly.