For many years, styrene maleic anhydride (SMA) copolymers have been successfully used as both dispersants for water-based pigment dispersions and as transfer additives in flexographic printing inks. While studies on the use of SMA copolymers as dispersants have been well documented, a thorough analysis of the use of SMA copolymers as ink transfer aids has not been found. In general, SMA copolymer resins are credited with helping the ink transfer from the ink roller to the anilox, from the anilox to the printing plate, and from the printing plate to the substrate, while minimizing misting and other printing defects. In this article, a new SMA copolymer derivative – SMA® 1550H – will be introduced and tested along with other SMA additives and commercial additives as post-added ink transfer aids to compare the effects on print optical density – a quantitative measure of ink transfer. Furthermore, the effects of the transfer aid chemistries will be monitored by measuring rheology and ink film water resistance. Print quality and optical density (color strength) from both a lab-scale Harper Phantom proofer and a commercial 18-inch narrow web flexographic press will be discussed. The superior performance of the SMA 1550H will be shown.

Trials were performed comparing the SMA additives with commercially available ink transfer aids. The inks were tested on lab-scale equipment and then run on a commercial flexographic printing press at 1,000 ft/min using a 900 line screen @ 1.25 billion cubic microns (BCM).

SMA additives were compared to a commercial fumarated rosin ester, several commercial styrene-alpha methyl styrene-acrylic acid terpolymers and a commercial ink transfer aid. Dispersions were made with 30% DR-269 Lithol Rubine pigment and an anionic surfactant, and letdown with a high-gloss acrylic vehicle to make a flexographic ink. Ink viscosities were measured and monitored to determine the effect of the ink transfer additives on ink stability at room temperature and elevated temperature (60 °C).

Print proofs were made with a Harper Phantom proofer with 750 line screen @ 2.8 BCM to determine the quality of the inks and transferability. Separate additions of 5, 10 and 15% water were added to each ink to further evaluate ink transfer and to test the dilution effect on optical print density. Ideally, the best ink transfer additive gave the highest optical density, even with further dilution.

Additionally, an ink resolubility test was done to simulate when the press starts and stops during printing to ensure that the optical density remains the same. Finally, larger batches of cyan, magenta, yellow and black inks were made and tested on a commercial-scale flexographic printing press to generate commercial-scale proofs. 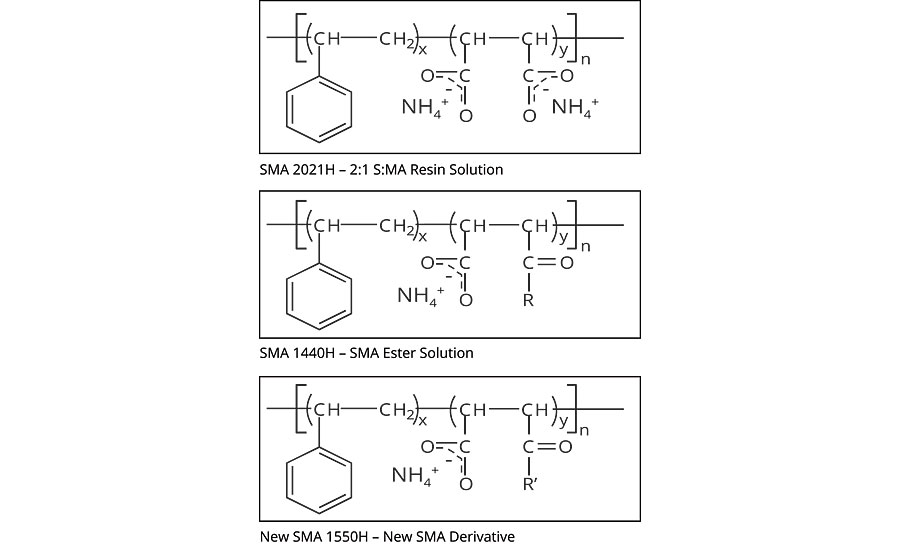 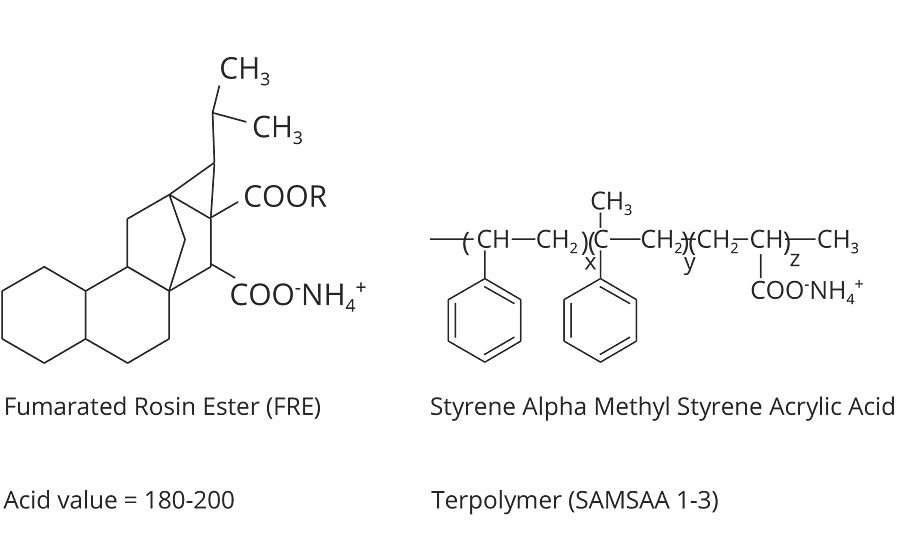 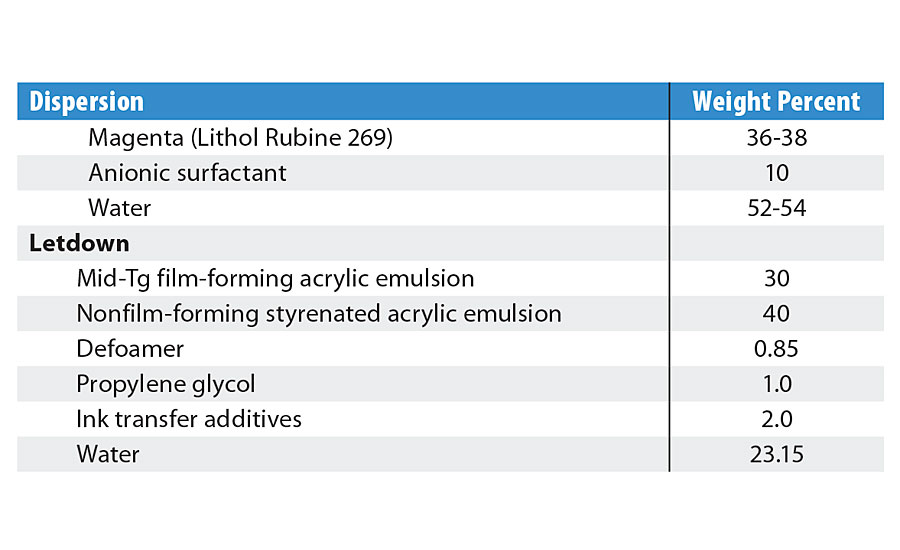 Dispersions were prepared using an Eiger M100 media mill with 0.6-0.8 mm yitrium-coated zirconium ceramic beads, with a 0.5 mm screen. Pigments were dispersed for a minimum of 6 hrs to reduce particles to <1.5 microns, monitored by Hegman gauge and a particle size analyzer.

Print proofs were made with a Harper Phantom proofer with 750 line screen @ 2.8 BCM anilox and Shore A hardness 65 durometer to determine the quality of the inks and transferability.

To study the effectiveness of the additives as ink transfer additives, ink viscosity, color development and ink film water resistance were measured.

Water resistance on final ink films was done by placing a water drop on the film, covering it with a watch glass for 24 hrs and then examining the water spot to see if any changes in the film appearance occurred. A yes/no scale, with yes=best, was used to assess water resistance.

Ink resolubility improvement was determined to indicate how well the inks would print if the printing process was interrupted. Using a 200 line screen @ 10 BCM anilox a 24-inch proof was made on 6-point paper using magenta ink. The anilox was then allowed to dry and the rubber roller was cleaned. The anilox was then reloaded with fresh ink, and a 36-inch print was made. Optical density was measured on both 24- and 36-inch prints, and the values should be within +/- 0.02 to pass. Example: magenta first print – 1.36, magenta second print after drying 1.34 = pass. This mimics a press stopping and restarting.

Optical densities were measured after separate additions of 5, 10 and 15% water to each ink to further evaluate ink transfer and test the dilution effect. Ideally the best ink transfer additive will cause the least decrease in optical density upon further dilution with water. 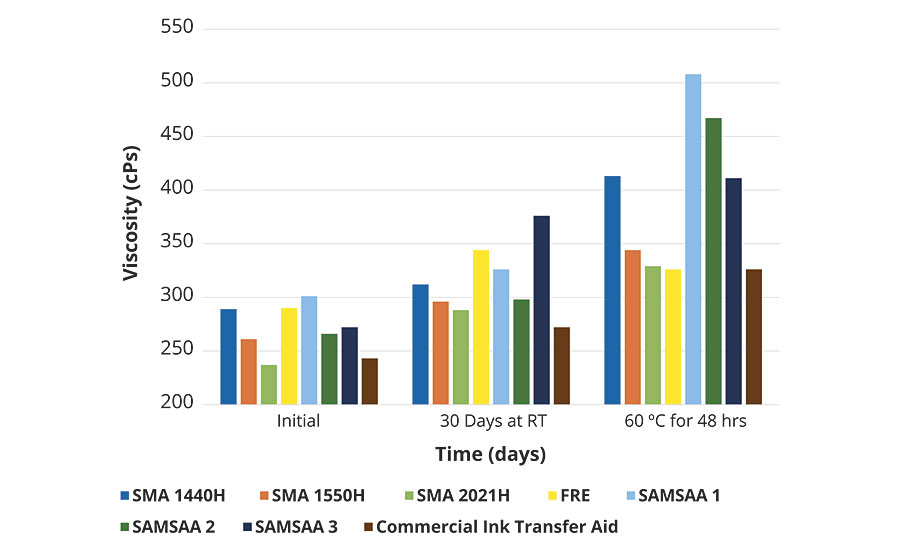 The water resistance on the ink films was done by placing a water drop on the film, covering it with a watch glass for 24 hrs and then examining the water spot to see if any changes in the film appearance occurred. A yes/no scale was given; either water-resistant or nonwater-resistant films. The results are shown in Table 2. SMA 1550H, SMA 1440H, SMA 2021H, SAMSAA1, and the commercial ink transfer aid all gave good water resistance. 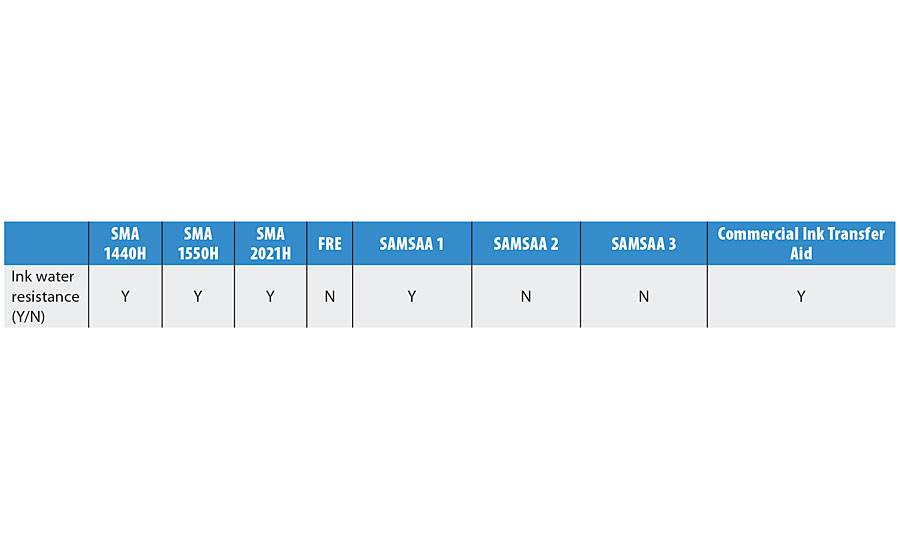 The ink resolubility test was done for all of the inks, and the results are shown in Table 3. SMA 1550H, SMA 1440H, FRE, SAMSAA1 and the commercial transfer aid had good resolubility. 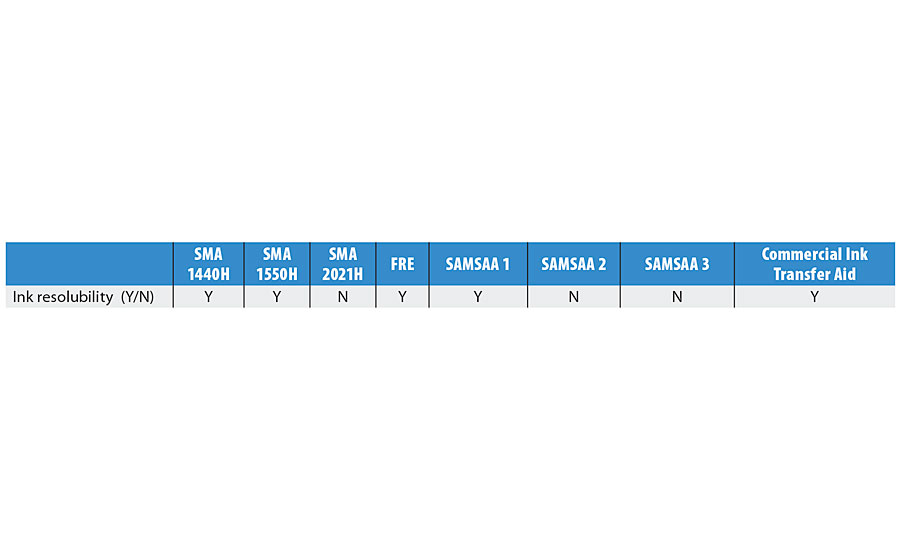 TABLE 3 » Resolubility of inks made with various transfer aids.

Optical density on inks diluted with 5, 10 and 15% water were measured, and the results are plotted in Figure 4. SMA 1550H was the only additive that retained a high optical density at all dilution levels. 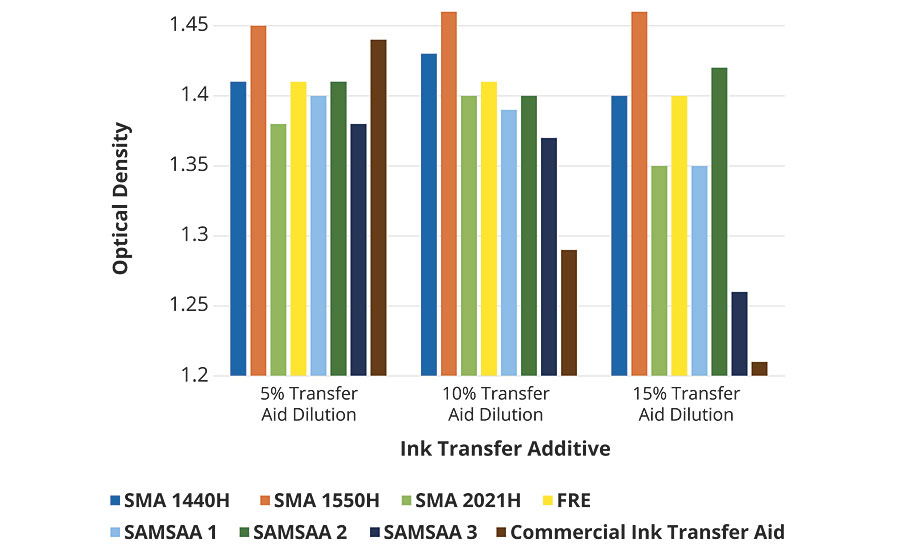 A photo of the lab prints of the magenta ink from the Harper Phantom proofer press is shown in Figure 5, along with the optical density values. SMA 1550H gave the highest optical density, M = 1.45. 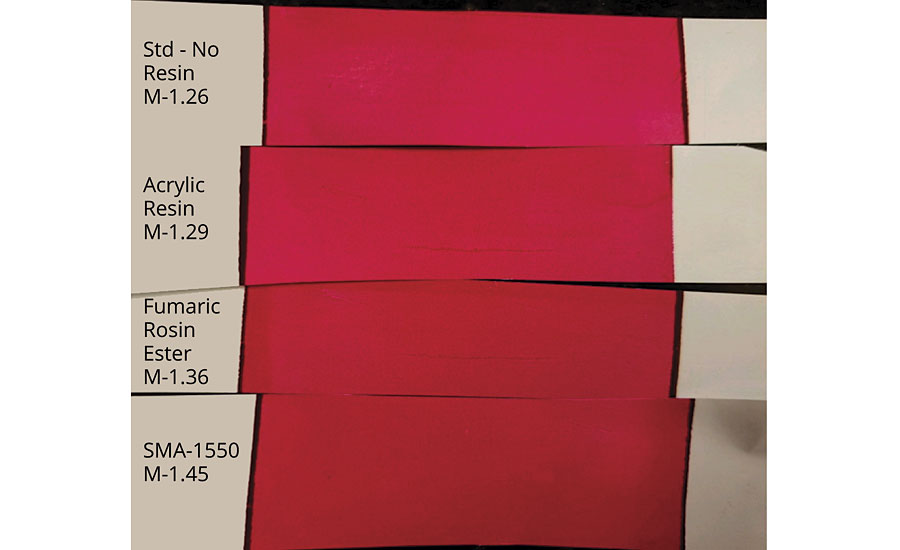 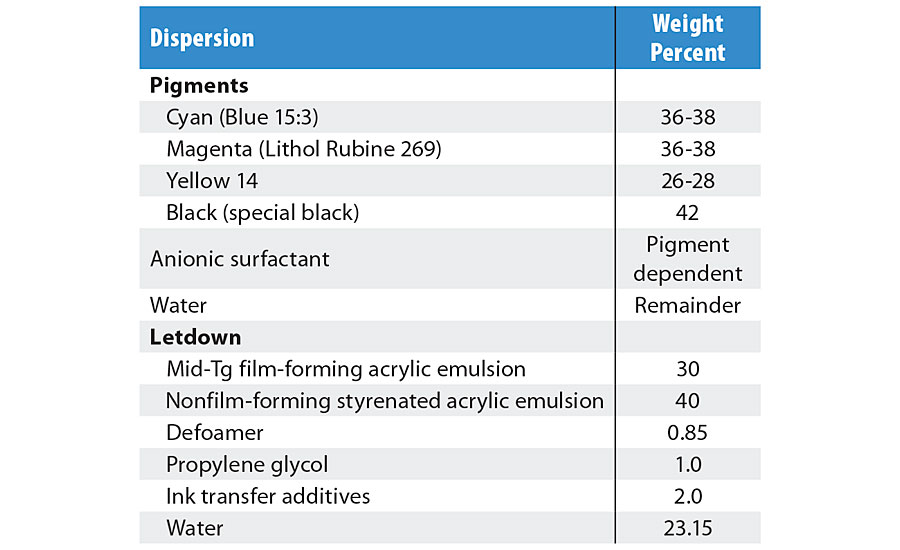 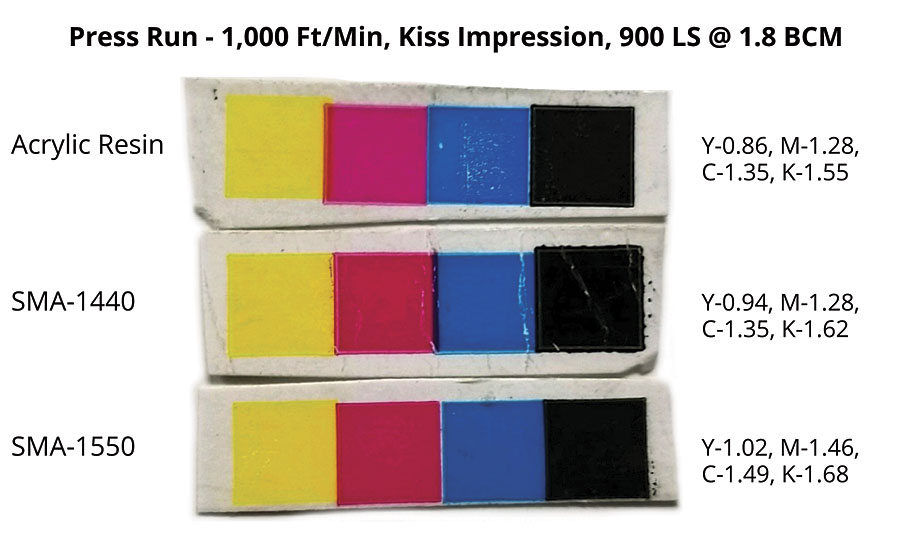 SMA 1550H gave the highest optical density values with all 4 colors – yellow, magenta, cyan and black compared to SMA 1440H, which had the second highest and the SAMSAA, which had the lowest values.

SMA resins have been effectively used as pigment dispersants and ink transfer aids for many years. This study quantitatively demonstrates that SMA 1550H performed exceptionally well as a transfer aid.