Pink stain is a common problem on marine fabrics such as seating cushions, upholstery flooring and other vinyl surfaces. Once the stain happens, it cannot be cleaned. However, there are ways to prevent pink stain in the first place, through either preventing the growth of the bacteria that causes it or by sealing the substrate with a coating.

Before addressing prevention, it is important to make a distinction between “pink stain” and “pinking,” which are two separate, unrelated issues. Pink stain is caused by bacterial activity on plasticized vinyl, while pinking is caused by chemical reactions associated with polymer over-heating and/or the action of air pollutants on polymer surfaces.

Pinking and/or yellowing in polyolefins and other polymers is a discoloration associated with the over-oxidation of phenolic compounds commonly used as anti-oxidants. Phenolic anti-oxidants are sacrificial. If they are not added in sufficient quantity, and/or other formulation ingredients act as oxidation catalysts, and/or they are used up from overheating, a species of chemical compound called quinones are formed (Figure 1). Quinones are bright red chromophores that can appear pink or yellow, based on their concentration and other ingredients in the formulation. Uncoated TiO2 can catalyze the formation of quinones at elevated processing temperatures or during heat aging studies. Zinc stearate, added to the formulation in sufficient quantity, will alleviate the problem, as zinc quinone compounds are colorless. 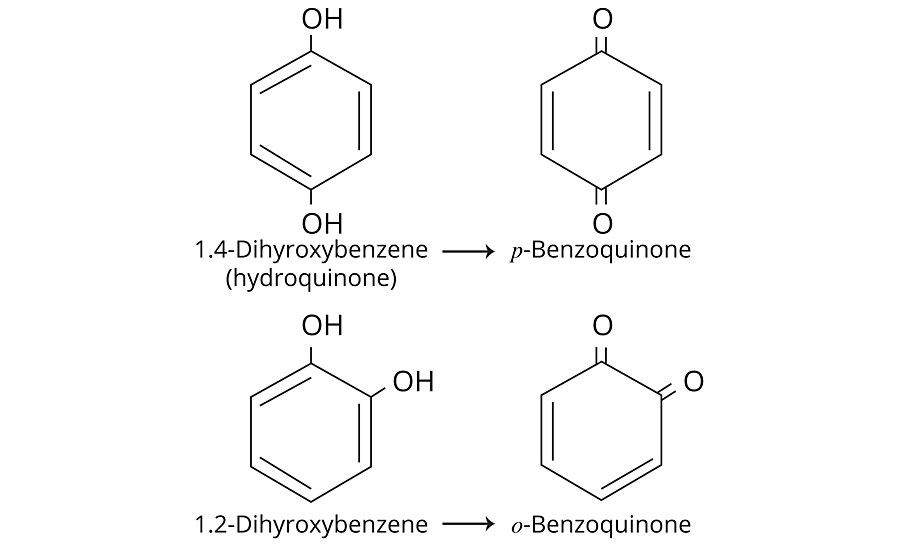 Pink stain is a term used to describe the result of microorganism growth on the surface of plasticized (flexible) vinyl and other polymers. The microorganism, Streptoverticullium reticulum, is a Gram positive bacteria found predominantly in soil and decaying vegetation. Streptomyces is the largest genus of Actinobacteria and the type genus of the family Streptomycetaceae. Most streptomycetes produce spores and are noted for their distinct "earthy" odor that results from production of a volatile metabolite, geosmin. At one time this genus was thought to be a fungus.

Streptomycetes are characterized by a complex secondary metabolism (also called a specialized metabolism), although secondary metabolites are not absolutely required for the survival of the organism. Streptomycetes produce over two thirds of the clinically useful antibiotics of natural origin (e.g., neomycin, cypemycin, grisemycin, bottromycins and chloramphenicol). The antibiotics are produced in self-defense to fight other bacteria. Streptomycin takes its name directly from Streptomyces. At the end of World War II, the United States Army experimented with streptomycin to treat life-threatening infections at a military hospital in Battle Creek, Michigan. The first patient treated did not survive; the second patient survived but became blind as a side effect of the treatment. In March 1946, the third patient was Robert J. Dole, later majority leader of the United States Senate and presidential nominee. He experienced a rapid and robust recovery.

Flexible vinyl, as used in marine seating and upholstery, slowly oozes plasticizer as time passes, a process known as plasticizer migration. Plasticizer on the surface of flexible vinyl sheet is consumed by Streptoverticullium reticulum and metabolized. One of the metabolites is a soluble red dye. The red dye passes down into the vinyl substrate by absorption, going from a higher concentration to a lower concentration. It can be demonstrated by writing on the surface of a clear, flexible vinyl sheet with a ball point pen. The ink will pass through or migrate through the flexible vinyl and come out the opposite side.

Prevention is the best way to deal with pink stain issues. There is no conventional way to clean pink stain because the dye causing the stain has been absorbed and is no longer on the surface. A recent patent application (US 2016/0281037 A1 Sept. 29, 2016) describes a method of bleaching the pink stains from an existing Streptoverticullium reticulum bloom using heat, light (wavelength 494±5 nm) and bleach (oxidizing) agents.

ASTM Standard E1428 is a way to evaluate the ability of synthetic polymeric material to resist Streptoverticullium reticulum. Cells of Streptoverticullium reticulum are grown and coated on the entire surface of a fresh agar plate. The test specimen is placed on the inoculated plate surface face down. The covered test containers are incubated at high humidity for 14 days; however some comparison results can be seen in a week. After the incubation period, specimens are inspected for staining. Flat polymeric materials are easily tested. Pink staining is easily determined by unaided visual inspection. There can be a problem inspecting the staining on dark materials due to lack of contrast. As a rule of thumb and included in the ASTM standard, inspecting the test surface under pink light will enhance contrast and better allow the pink stain to be distinguished on dark-tinted substrates.

The traditional method of preventing the growth of Streptoverticullium reticulum is by using toxins, i.e., biocides. Common biocides include arsenic compounds and various complex organic compounds with iodine or zinc. Arsenic, e.g., 10,10-oxybisphenoxarsine (OPBA) is quite effective. A biocidal blooming agent, it is designed to migrate to the surface of the substrate, giving it a large zone of inhibition. Arsenic is not popular anymore for ecological and safety reasons.

A less toxic candidate to replace arsenic is zinc pyrithione (ZPT.) ZPT has been used for over 50 years to effectively treat dandruff and has become the most common material for that purpose, e.g., Head and Shoulders shampoo. It is a molecule modeled after the naturally occurring antimicrobial aspergillic acid that interferes with cell division. ZPT has low solubility in water (8 ppm at neutral pH), so it is suitable for use in outdoor coatings and should provide protection against microbes including bacteria, fungi and algae.

ZPT does not work well with metal carboxylate curing agents. In water-based coatings that contain metal ions, such as iron, a sequestering or chelating agent is always a good idea to render the ion nonreactive and water-soluble. Ethylenediaminetetraacetic acid, i.e., EDTA is a popular chelating agent. EDTA has a low level of toxicity. In fact, it is injected into humans to treat heavy metal poisoning by chelation. ZPT decomposition by ultraviolet light is slow, providing years of protection even in direct sunlight. It must be disbursed in a formulation as a particulate material, which results in a slow-release active coating surface that controls Streptoverticullium reticulum population as well as their activity by interfering with cells division.

A fairly recent antibacterial additive with great promise is nanosilver, which are elemental silver particles with a diameter measured in 10-9 meters or billionths of a meter. Silver is not toxic to humans or animals but will kill micro-organisms. That's why eating utensils made of silver, i.e., became popular.

Another approach is the use of a barrier coating. PVDF coatings for flexible vinyl seal the vinyl surface shut and will not allow plasticizers to pass. As proof, consider how adhesive tape and pressure sensitive adhesives can be used on PVDF-coated flexible vinyl surfaces without adhesive failure due to plasticizer migration. PVDF barrier coatings contain no toxins and are chemically “tight” so nothing is absorbed, making the surface highly cleanable. Streptoverticullium reticulum will not grow on a surface where there is nothing to "eat". If the PVDF surface is contaminated with nutrients, and Streptoverticullium reticulum grows, it may produce dye, but it cannot be absorbed, so the surface can be wiped clean with soap and water or alcohol. PVDF coatings provide an easily cleaned, hydrophobic surface with a pleasant dry hand.

A top coating will protect the top of the surface, but Streptoverticullium reticulum can also grow on the back side of the substrate. The pink dye may be produced and absorbed on the back side, pass through the vinyl substrate and appear on the top surface. If a barrier topcoat is clear or translucent, then the stain will be visible and still cause cosmetic damage. In seating, where vinyl upholstery covers a foam cushion, the Streptoverticullium reticulum will grow on the vinyl as well as in the foam if the seating leaks and water penetrates the interior construction of the seat.

As mentioned earlier, interior growth will also produce the compound geosmin (Figure 2), which translates from Greek as “earth smell.” It is the odor associated with wet, rotting vegetation on a forest floor after a rain. It undergoes a reaction with acids to give odorless argosmin. Geosmin might not be too unpleasant in the forest, and indeed is used in perfume, but it's not a pleasant aroma when it's coming from a seat. The interior side of upholstery fabric and the surfaces of foam cushions should be treated with ZPT. In order to get a uniform application, a water-based suspension or slurry of ZPT should be sprayed or brushed on and allowed to dry completely before the cushions are covered, trapping the ZPT particles inside the upholstered seat. ZPT, as previously mentioned, is only slightly soluble in water so the powder will stay in position on the interior surfaces. Even if water gets in, it would prevent an interior bloom of Streptoverticullium reticulum as well as other pest flora. 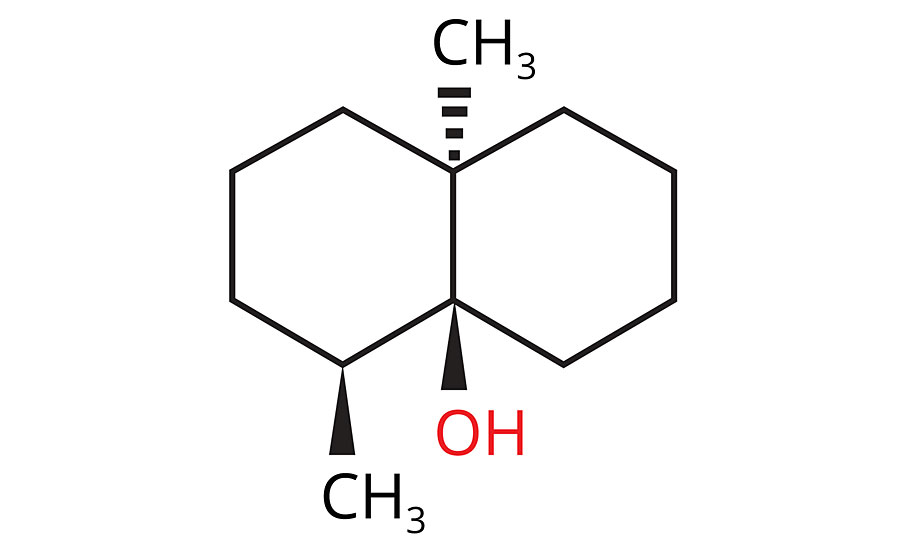 Getting it Right: Formulating Color Efficiently and Sustainably