Can Replace Isocyanates in Clearcoats

A new class of one hundred percent-reactive monomeric materials is enabling a wide variety of high-performance products that can be cured rapidly at low temperatures, reducing the need for solvents, heat or ultraviolet light. This new technology is enabling numerous product and processing improvements in adhesives, paints and coatings, composites, printing, and other industries.

Chemists have long realized that electron-deficient disubstituted alkenes, with their ability to polymerize anionically, held great promise in adhesives, coatings and other polymer applications. However, the ability to reliably produce these highly reactive monomers, stabilize them and deliver them on an industrial scale is a very recent development. Ongoing refinements to this new technology have allowed the development of a family of methylene malonate monomers with a variety of substituents on the ester side groups. These various building blocks give rise to polymers exhibiting glass transition temperatures ranging from -50 °C to 190 °C, with corresponding mechanical properties and adjustable cure characteristics. Such polymers can be made to adhere to steel, tin-plated steel, aluminum, glass and wood, as well as a variety of plastics such as polycarbonate, ABS, styrenic plastics, sheet molding compounds and acrylic plastics.

Recent work has also focused on the development of multifunctional methylene malonates through transesterification of ester side groups with numerous diols. These can give rise to difunctional methylene malonates that permit crosslinking, and multifunctional polyester-type macromers with high molecular weight (>700 Dalton). These products can be used as raw materials for a variety of coatings applications, thanks to their film-forming capabilities and the high-count alkene functionality distributed across the main chain, which tends to crosslink when exposed to basic or nucleophilic constituents in primer/sealers or basecoats. One development area of focus has been low-temperature-curing clearcoats, with the potential for performance properties equal to clearcoats made with urethane isocyanates.

Superior automotive clearcoats require specific performance parameters. The goal in this case was to create a clearcoat comparable to those made with urethane isocyanates. Consequently, targeted coating characteristics included a pencil hardness of greater than or equal to 4H, high gloss, solvent resistance, flexibility and excellent adhesion to basecoats. The ideal coatings were also required to cure fully within 20-30 min at low temperatures. In addition, they had to be resistant to UV light, moisture, acids, fuels and other media that automotive clearcoats may be exposed to during their lifetimes.

Clearcoat development focused on spraying prototype formulations over cold rolled steel panels treated with factory-applied basecoats. Such basecoats typically contain basic/nucleophilic components in the form of pigments (often based on titanium dioxide), and residual hydroxyl or amine groups. Basic surfactants are also commonly used. This type of chemistry promotes initiation of the methylene malonate-based polyester macromers through anionic polymerization. It also promotes adhesion of the clearcoat and allows for better wet-out on the surface.

By heating at low temperatures, it was possible to promote rapid anionic cure in a 20-30 min time frame. Applied temperatures between 50 °C to 120 °C resulted in complete cure of the clearcoat formulation.

It was hypothesized further that the residual hydroxyl functionality on the basecoats would also undergo a Michael addition reaction with the alkene functionality of the polyester macromer. In this way, most of the polyester macromer’s chains would be incorporated into the crosslinked matrix. Such a reaction would also promote covalent linkage and tethering of the clearcoat to the basecoat, resulting in a durable adhesive bond. In the long run, this Michael reaction might simplify clearcoat formulations by reducing their need for complex adhesion promoters.

Formulations also include conventional acrylic polyols as co-resins. The hydroxyl functionality on the acrylic polyol can undergo Michael addition with the alkene functionality on the polyester macromer, allowing crosslinks to form between the polyol and Sirrus macromer. Acrylic polyols with amine functionalities would promote even faster Michael addition with the alkene functionality, thereby allowing a further reduction in curing times and temperatures. Acrylic polyol backbones have been used extensively in clearcoat formulations and typically have well-defined properties such as high gloss, and UV/moisture and acid resistance. Incorporation of acrylic polyols in a crosslinked matrix facilitated by the Sirrus polyester macromers would be a powerful way to improve resistance characteristics of coatings.

A representative clearcoat formulation incorporating these polyesters and acrylic polyols is summarized in Table 1. 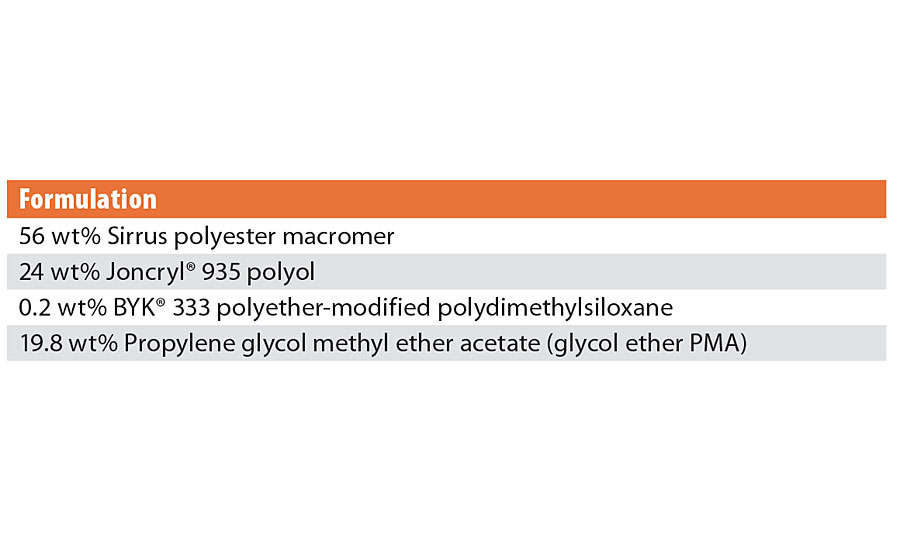 This first-generation polyester macromer utilized a polyester derived from DEMM and an alkane diol spacer (Formulation 1). A second formulation was then prepared from a second type of Sirrus polyester macromer, derived from DEMM and a combination of a cycloaliphatic diol and a flexible propanediol (Formulation 2). This combination of diols is expected to perform better in long-term UV/moisture aging tests. Performance data for these two formulations is shown in Table 2. 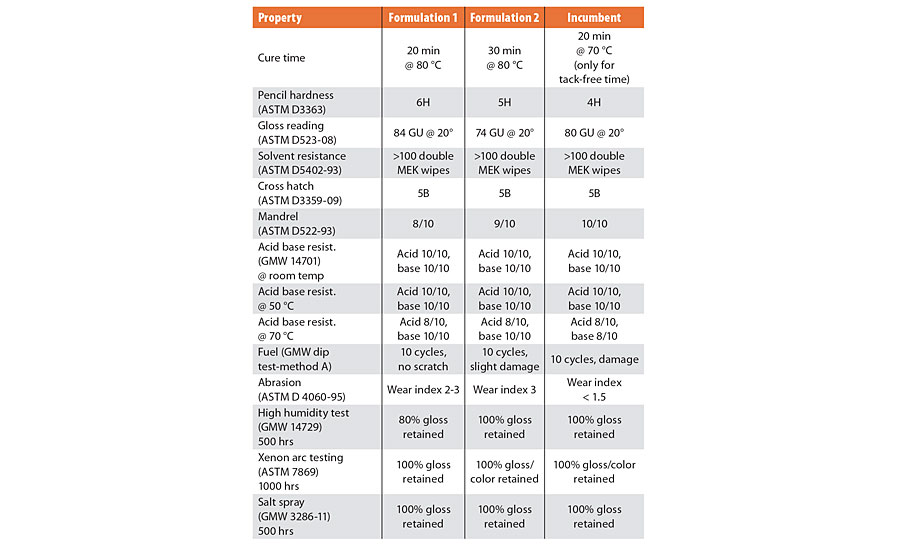 TABLE 2 » Performance testing data for polyester macromer Formulations 1 and 2, compared with that of an incumbent isocyanate-based urethane clearcoat

These test results demonstrate that coatings made with these formulations retained their gloss after 1,000 hrs of exposure to an accelerated test utilizing UV/moisture exposure (xenon arc), and 500 hrs of exposure to corrosion by salt spray. Exposure testing is in the process of being repeated for even longer durations to meet specifications for actual automotive clearcoats.

Performance of the two formulations described above was compared with that of an isocyanate-based urethane clearcoat incumbent technology typically used in the refinish market. This control coating was a fully formulated product optimized for ideal wet out, adhesion and resistance characteristics. The prototype formulations described above show early promise as can be seen in Figure 1, and compare favorably in both initial and long-term resistance characteristics. More improvements are expected with subsequent modifications of Sirrus macromers and development of newer cure strategies. 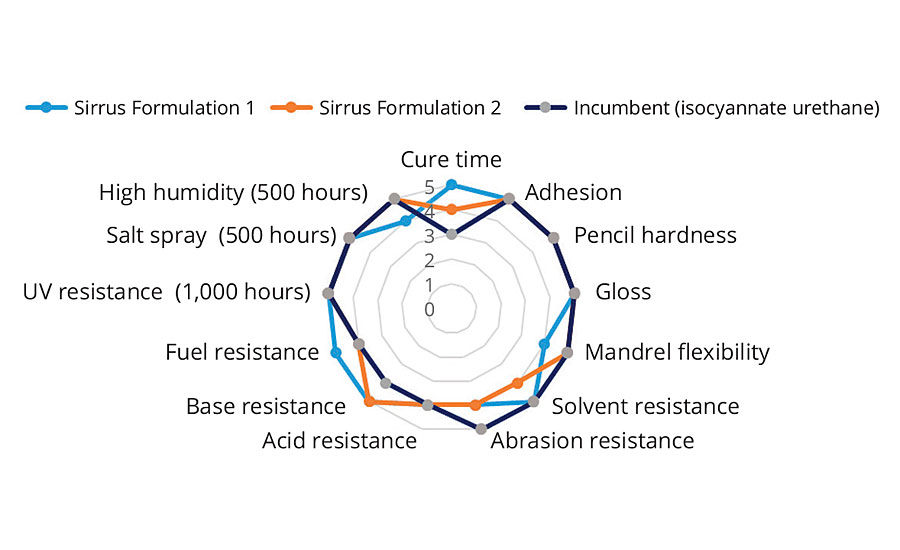 FIGURE 1 » Performance of Formulations 1 and 2 compared with that of a clearcoat made using incumbent isocyanate urethane-based automotive refinish technology.

A unique aspect of formulations based on these macromers is the synergistic, cure-promoting behavior demonstrated by the basecoat beneath the clearcoat. Figure 2 shows the differential scanning calorimetry (DSC) cure profiles of Formulation 1 in the presence of and in the absence of basecoats on the DSC pans. The DSC thermograms demonstrate that the cure times are much lower at a range of temperatures between 40 °C to 120 °C in the presence of a basecoat. When there was no basecoat, there was no noticeable exotherm (an indication of curing) on the thermogram. 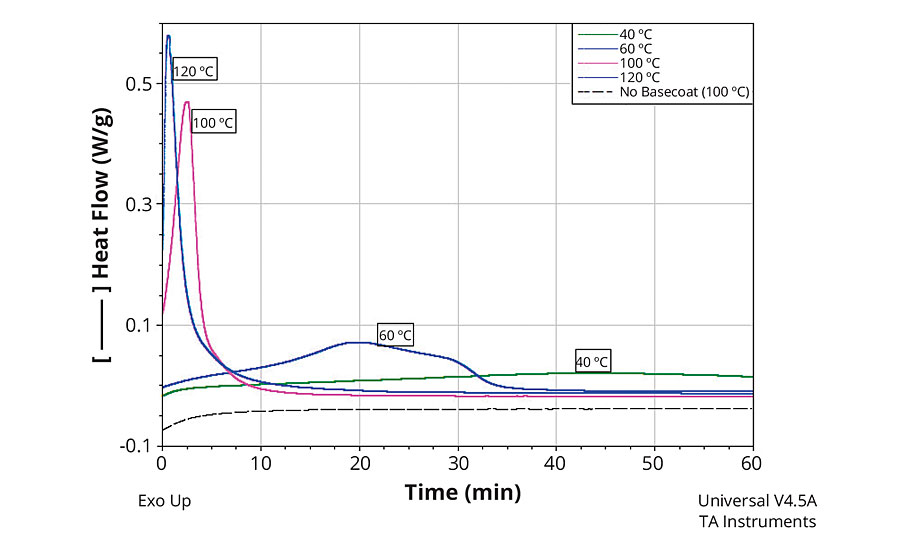 FIGURE 2 » A DSC thermogram showing the cure profiles of Formulation 1 in the presence and absence of a basecoat, at various temperatures.

Figure 3 shows the cure conditions and solvent content employed for Sirrus formulations and chemistry compared with those of incumbent technology. The reduction in solvent content from 40-45% for various incumbent technologies to about 20% using this new technology will afford OEMs significant savings by reducing costs associated with solvent flash off, recovery or disposal. Also, oven temperatures can be dialed down to 80 °C (or even lower, with future developments), saving energy costs. Furthermore, in the long run, using these new monomers as reactive diluents, we may be able to achieve an even higher percent solids content (lower solvent levels). 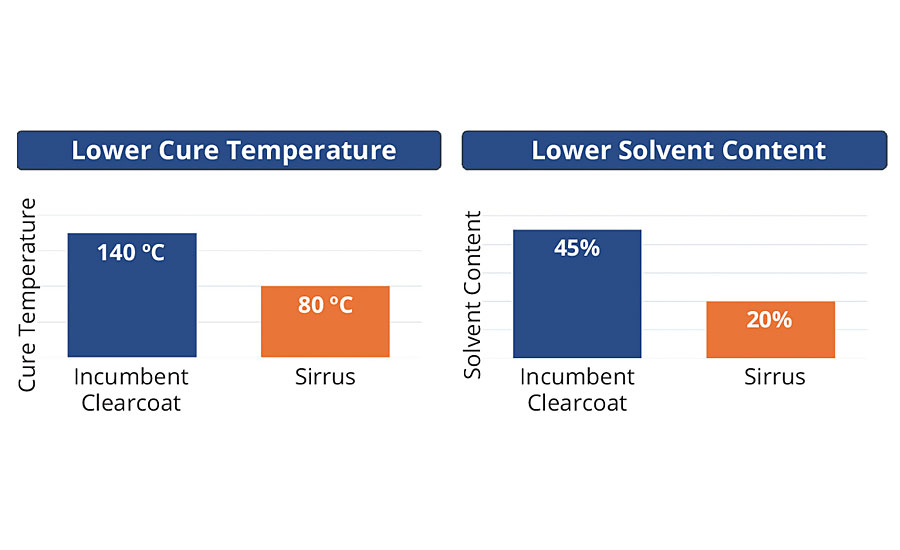 FIGURE 3 » Value proposition of clearcoats made using Sirrus technology, in terms of lower cure temperatures and lower solvent content (related to cost and environmental suitability) compared with that of the incumbent isocyanate urethane-based clearcoat used in automotive refinish.

In refinishing, where incumbent technology utilizes isocyanates and cures at lower temperatures, this technology offers faster return-to-service: just 20 min are required for a tack-free surface that is at least 80% cured. Urethane isocyanates, on the other hand, may take up to an hour to be tack-free.

Using one hundred percent-reactive methylene malonate monomers, difunctionals, multifunctionals and prepolymers, manufacturers of paints, coatings and other products can dial in a wide range of properties to produce a variety of high-performing polymer products that cure rapidly at low or ambient temperatures.

Performance testing has demonstrated the versatility and power of this platform in coating applications. Applying this new technology, clearcoats have been made to perform as well as a benchmark urethane isocyanate often used in refinishing, only with safer, less-costly and more energy-efficient processing characteristics.