The near-term outlook for participants in the industrial coatings industry remains bright. On top of broad economic tailwinds such as low interest rates, cash-rich participants and an active M&A market, several industry-specific factors are providing further lift. Companies are introducing innovative new technologies as customer demands evolve, end markets such as automotive and aerospace are growing, and global regulatory environments continue to change. In this article, we discuss several key industrial coatings market drivers, shown in Figure 1. Participants who are well-positioned to capitalize on these trends can expect healthy profits for the foreseeable future. For purposes of this article, we broadly define industrial coatings to include OEM coatings for automotive, aerospace and other applications; general industrial finishes for structures, machinery and equipment, coil and electrical insulation; and industrial maintenance and protective coatings, among others. 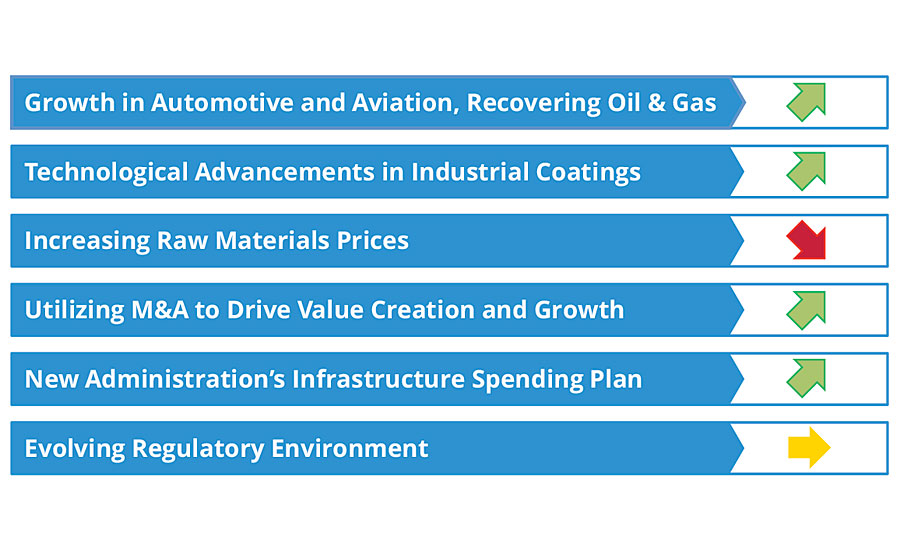 Growth in Automotive and Aviation, Recovering Oil and Gas

Despite the cyclical nature of the oil and gas, automotive and aerospace industries, the near-term outlook is positive for industrial coatings providers who can adapt to changing customer demands and selectively utilize the M&A market to add capabilities and growth.

Automotive and aerospace, two large industrial coatings end markets, exhibited strong growth in recent months. U.S. light-vehicle auto sales have recovered from recession lows to an all-time high of 17.6 million vehicles in 2016, and China saw a 15% jump in auto sales to 24.4 million vehicles in 2016.1,2 While the rate of growth is expected to slow in 2017, particularly in China where a federal purchase-tax discount is being phased out, overall demand is expected to continue to grow. In China, vehicle manufacturers still predict a 5% growth in car sales in 2017.

As organic growth in the automotive sector slows, some companies are turning to M&A as a tool to accelerate growth and expand core competencies. Axalta, the DuPont spinoff, is at the forefront in executing such a strategy. A leader in automotive exterior coatings, the company has completed eight acquisitions since mid-2015, including the acquisition of United Paint’s global interior automotive rigid thermoplastics coatings business. Grace Matthews advised United Paint on the transaction, and observed that the business generated significant strategic buyer interest, indicative of the overall strength in the M&A market. In most of Axalta’s acquisitions, the acquired company was a much smaller private entity that could be tucked into Axalta’s existing operations, presenting the opportunity for significant synergies.

The aerospace industry is experiencing a similar period of strong growth. As shown in Figure 2, commercial jet deliveries continue to trend upward, and CEOs of both Boeing and Airbus have signaled plans to increase monthly production of mid- and long-range aircraft to meet demand. Aircraft manufacturer preferences are also beginning to shift away from decals that tend to chip or fade over time and towards fully painted bodies with improved durability. 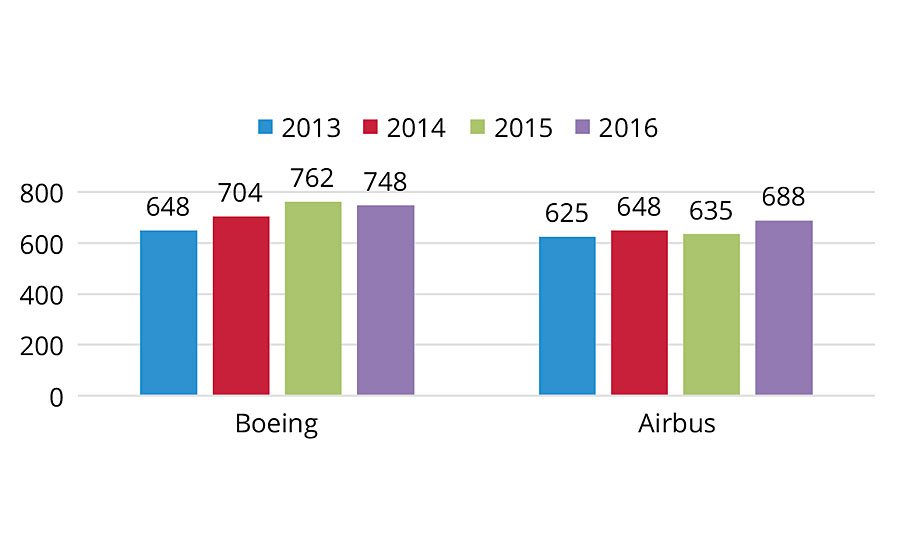 As oil prices have recovered, oil and gas exploration is also starting to rebound. From 2016 lows of around $30/barrel, West Texas Intermediate (WTI) crude has rebounded to the $45-55/barrel range. Many analysts expect WTI to remain at or near these levels throughout 2017. Consequently, U.S. rig counts, an indicator of demand for oil and gas-related industrial equipment coatings, have increased steadily from May 2016 lows of approximately 400 to over 800 today.

The industrial coatings market is continuously innovating, driven by evolving environmental regulations and customer preferences for enhanced product features and extended lifecycles. In response to volatile organic compound (VOC) regulations, the shift towards low- and zero-VOC products with high solids content and waterborne products continues. In the automotive, aerospace and other industrial OEM markets, customers are seeking ways to reduce manufacturing cycle times, lower total cost of ownership and improve quality. Coatings manufacturers are responding by introducing products that require fewer application layers and have faster curing times. Sherwin-Williams, for example, recently introduced a two-coat powder system that can be applied in a single bake cycle, allowing finishers to improve throughput times while reducing labor and energy usage. In response to increased demand for corrosion and impact resistance for underbody and underhood parts, advancements are being made in self-healing coatings using nanotechnology to improve corrosion, scratch and ultraviolet resistance.

What does this mean for the industry? While overall coatings demand is moderate, the growth prospects for advanced technologies including waterborne and high-solids coatings, powders, UV curables, and two-component systems appear to be much stronger. Established companies will either need to retain robust R&D capabilities to develop these technologies in-house, or acquire them inorganically. This is good for smaller, technology-focused companies who may be viewed as highly attractive to large strategics with the ability to push such technology through their broad distribution networks.

One headwind facing coatings manufacturers is the recent uptick in raw material prices. Chemical raw materials constitute a significant portion of the overall cost of industrial coatings. As shown in Figure 3, approximately 85% of the cost of a coating is derived from raw materials and intermediates such as resins and latex, solvents and pigments, titanium dioxide (TiO2) and additives. 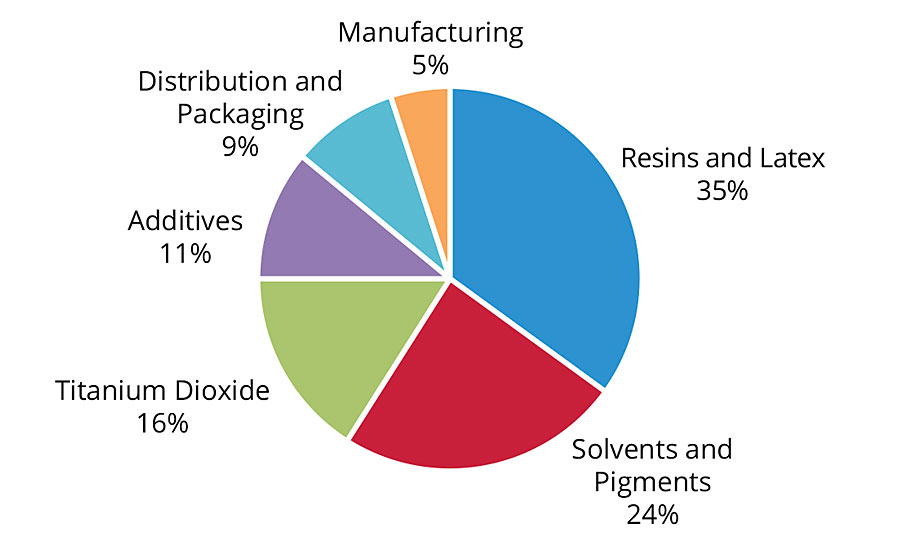 Changes in raw material input costs have historically been difficult for industrial coatings manufacturers to pass on to customers due to the competitive nature of the industry. In the declining commodity price environment of the last few years, many coatings manufacturers have benefitted. More recently, however, prices for many commodities have reversed direction and are increasing. Crude oil prices have rebounded from recent lows to approximately $50/barrel, and titanium dioxide, widely used to provide opacity and as a white pigment in coatings, has experienced price appreciation, with key manufacturers including Chemours, Tronox and Huntsman all signaling price increases in recent months (Figure 4). 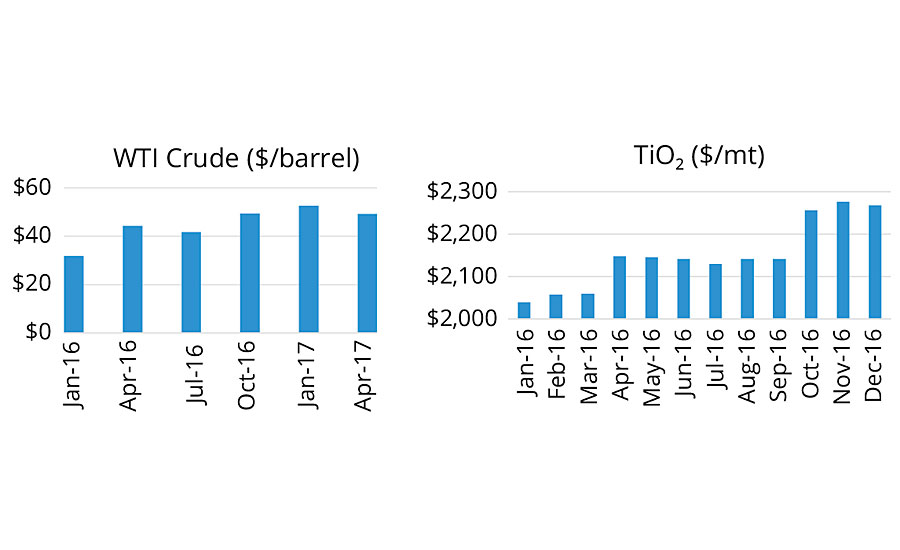 Coatings formulators with scale and purchasing power will be better suited to withstand the potential for margin pressure associated with higher raw materials costs. Fortunately for coatings participants, most experts predict prices will stabilize in the coming months.

The consolidation trend in the coatings market continues. Once the merger of Sherwin-Williams and Valspar closes, the top three coatings firms (PPG, SHW/VAL and AkzoNobel) will control approximately one third of the global market.6 As the landscape evolves, it presents new opportunities for M&A. As we’ve written about in a prior Grace Matthews newsletter, industry mega-deals affect the entire value chain. First, the potential synergies for acquirers in the space is tremendous, which in turn drives valuations higher. Sherwin-Williams, for example, expects around $280 million of annual synergies with Valspar, nearly half of which are raw material cost synergies alone. Despite required asset divestitures to gain FTC approval of the deal, the transaction remains highly attractive for both parties. On January 26th, the day that SHW announced it would have to divest assets (not expected to exceed $650 million in revenue), SHW and VAL shares rose 7.6% and 2.2%, respectively, signaling investor confidence in the likelihood of completing the transaction with minimal impact on the combined company’s prospects.

Second, in the search for continued growth, larger players are beginning to make smaller acquisitions or look to adjacent markets as directly relevant opportunities with scale become more scarce. In one recent example, PPG, best known for its coatings technology and production expertise, acquired MetoKote, a $200 million (by revenue) coatings services provider. With the wave of consolidation in the industry creating a scarcity of medium-sized coatings companies in recent years, we expect to see most M&A activity occurring when larger companies bolt-on a smaller company with revenues in the $10-$100 million range.

A third trend that bodes well for M&A is the uptick in corporate carve-outs as CEOs begin to more actively manage their portfolios. The heydays of conglomerate building have long since subsided, and we’re beginning to see numerous noncore divestitures, such as Air Products’ spinout of its Performance Materials business unit to Evonik and BASF’s spinout of its Industrial Coatings business to AkzoNobel.

While uncertainty remains, the Trump administration in the U.S. has signaled plans to introduce a substantial infrastructure spending package in 2017. Funds will be directed towards investments in transportation, water, energy and telecommunications. Such a program would have a direct impact on the chemicals sector, particularly the industrial coatings segments involved in concrete, structural metal, machinery and equipment applications. As we wait to see the scale and speed of approving a funding package, the fundamental necessity of significant investments offers a positive outlook for the coatings sector. The American Society of Civil Engineers estimates that $3.6 trillion in investment will be needed through 2025 to fund airports, highways and other infrastructure.7

Regulations are ever-present in the industrial coatings market and vary significantly by country. In developed economies such as the United States, VOC and ozone limits continue to ratchet downward. While the current administration is philosophically opposed to regulations, states such as California and Pennsylvania are taking the initiative to impose their own set of regulations. China, the world’s leading producer of industrial coatings, is catching up quickly in response to dangerous levels of air pollution in its growing cities. Laws have recently taken effect that tax and limit VOC emissions from coating and other industrial manufacturers. None of these changes have occurred overnight, however, and multinational coatings manufacturers have, for the most part, successfully managed through these regulations. Anticipating further regulation, and to consolidate product lines and cut costs where possible, most are looking to the most stringent rules as a guidepost when formulating new products.

Regulations will continue to be a contributing factor towards consolidation of the industry, as smaller players with limited R&D budgets have more difficulty managing through such regulations across geographies. At the same time, multinationals are constantly looking to acquire assets with differentiated technologies that can bring them ahead of the curve on environmentally friendly products and create value. AkzoNobel is one such company, overtly seeking bolt-on acquisitions since its recent ?480 million acquisition of BASF’s global industrial coatings business.

In short, the industrial coatings market continues to be an attractive area for capital and M&A investment. Despite rising prices for raw materials, most signs point to a favorable outlook for coatings manufacturers. Those with the ability to anticipate customer and market demands and innovate new products will be well-positioned for growth, which can be augmented through bolt-on acquisitions. Substantial activity in end markets such as automotive, aerospace, and oil and gas will also contribute to industrial coatings demand growth. In the near-term, we anticipate a continuation of the healthy industrial coatings market we’ve seen in recent months.