Polyurethane polymers are widely used in coatings, foams, elastomers, adhesives, sealants, inks, film, fiber and engineering plastics among other things. Specifically in the coatings area, they are commonly used in industrial, construction, textile, leather, floor finishes and other one- or two-component coatings due to the unique properties of polyurethanes and isocyanate-based reactions. Generally speaking, polyurethanes have good toughness that is primarily due to the molecular structure of the main chain of alternating soft and hard segments. The soft segment imparts flexibility to the polymer while the hydrogen bonds in the hard segment not only provide hardness but also form a physical crosslinking point that facilitates bonding. As a result, these polyurethanes are “soft but not sticky” and “hard but not brittle”, and these performance attributes widen the potential applications for polyurethane coatings.

As specified by ASTM D16, Standard Terminology for Paint, Related Coatings, Materials, and Applications, urethane coatings are classified from Type I to Type VI. Type I urethane coatings are oil based, and these types of urethanes are also called urethane-modified alkyds, whereby the isocyanate fully or partially replaces dibasic acid in the binder. A Type I urethane is usually made of an unsaturated vegetable oil or fatty acid in organic solvent; it is used as varnish and has been prevalent in the wood floor coatings market for more than half a century.1 As shown in Figure 1, the film formation for this type of coating is achieved by lacquer-dry followed by oxidative curing in the presence of a metallic drier. There are two categories of Type I urethanes: oil-modified urethanes (OMU), in which the isocyanate fully replaces dibasic acid in alkyd, and uralkyds, in which the isocyanate only partially replaces the dibasic acid. This urethane binder combines the benefits of urethanes such as abrasion resistance, hydrolytic stability and toughness with the benefits of alkyds such as oxidative crosslinking and use of renewable materials. 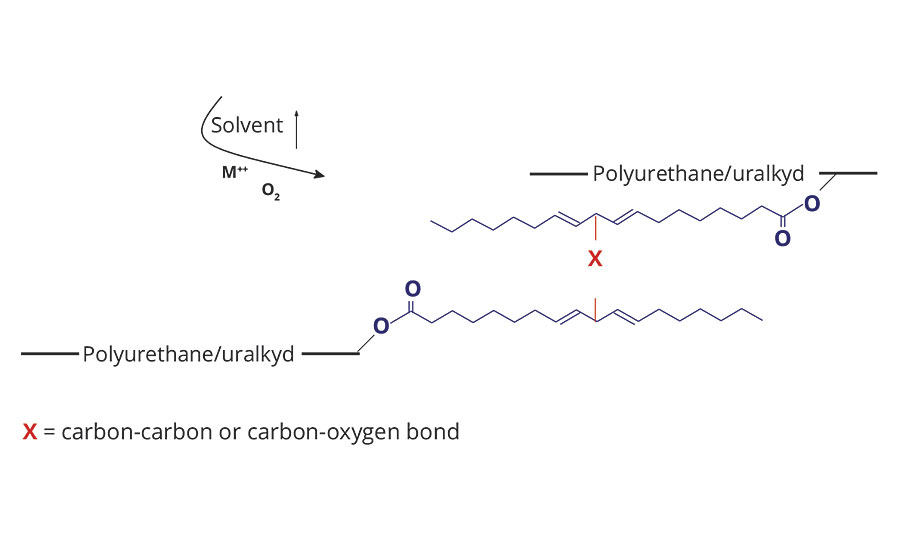 Conventional solventborne (SB) OMU or uralkyd varnishes have a VOC greater than 450 g/L, and with VOC regulations tightening, lower-VOC OMUs have become increasingly important. One method used to lower the VOC is to reduce the amount of solvent in order to make a high-solids-content varnish. Because the viscosity of the polymer solution is directly proportional to its molecular weight, this high-solids-content varnish must have a lower molecular weight in order to maintain a workable application viscosity. However, the lower-molecular-weight varnish shows deficiencies in film performance such as slow dry and soft film. Table 1 compares the basic film performance of 550, 450 and 350 g/L VOC varnishes. 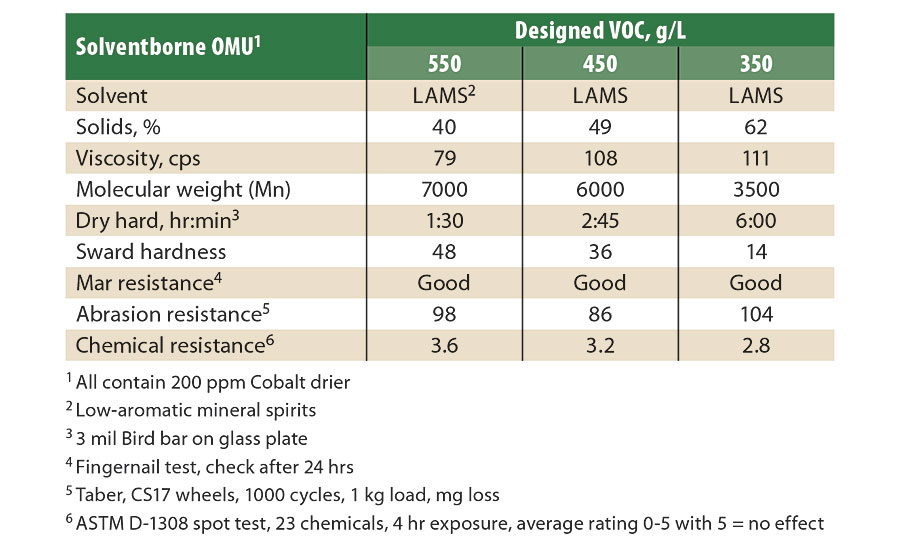 Another method used to make solventborne OMU with lower VOC is to use exempt solvent. In this approach, the polymer molecular weight can be kept reasonably high, which is advantageous to film performance. Common exempt solvents are listed in Table 2. 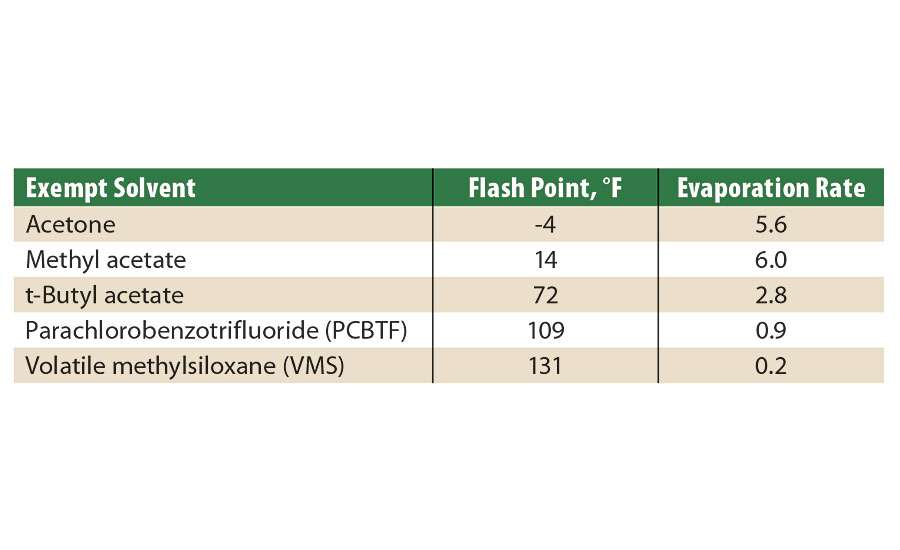 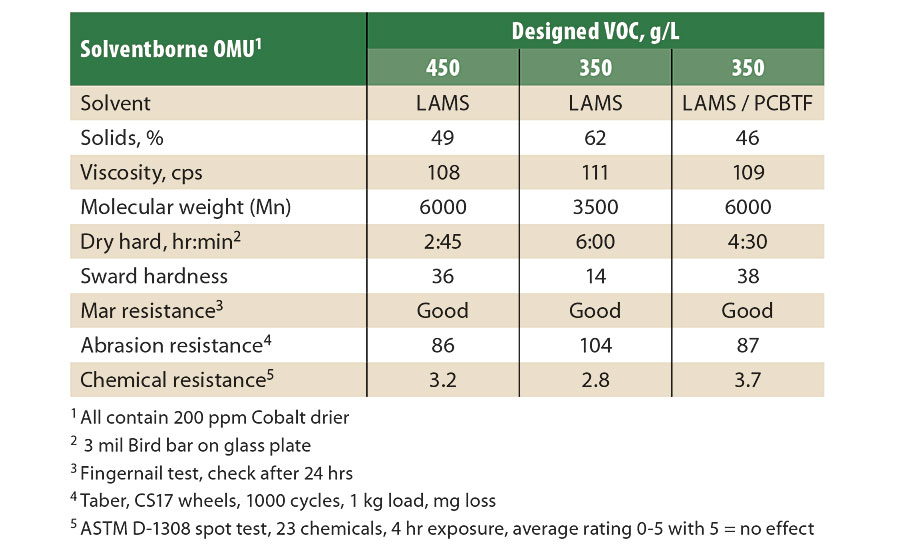 TABLE 3 » Comparison of the performance of SB OMU with exempt solvent.

Low-VOC Type I urethanes for solventborne coatings include high solids and exempt solvent approaches, but there are potential drawbacks to each approach. The high solids approach requires the molecular weight of the polymer to be lowered to maintain a good working viscosity, but this translates to a longer dry time, softer film and less coating durability. The exempt solvent approach overcomes the molecular weight shortcoming for improved film performance and allows for coatings less than 350 g/L VOC, but possible disadvantages include compatibility between the solvent, odor and sometimes film lapping.

As VOC regulations have tightened, resin suppliers are focused on waterborne (WB) approaches. Conventional polyurethane dispersion (PUD) is prepared by several routes, and the polymer formed is a predominantly linear polyurethane-urea.2 The polyurethane-urea dispersion forms a film by lacquer dry, which is by evaporation of co-solvent, water and neutralizer to form a thermal plastic film, as shown in Figure 2. 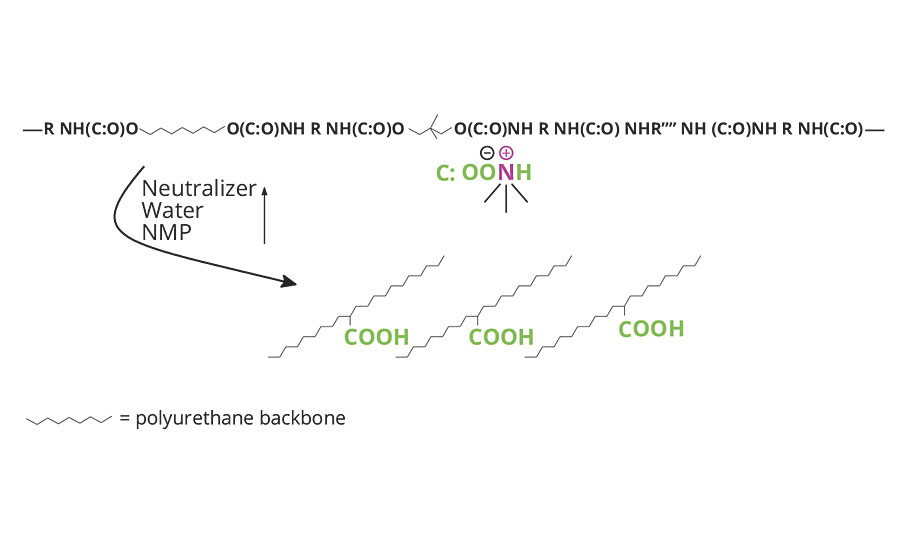 The conventional polyurethane dispersion can be modified by using fatty acid from vegetable oil and results in an oil-modified waterborne urethane.3 Since this waterborne urethane contains unsaturation, it can be formulated into a varnish by adding metallic drier. Similar to conventional high-molecular-weight PUD, after applying this urethane as a coating it initially forms a hard lacquer dry film followed by auto-oxidation to form a crosslinked film, as shown in Figure 3. In general, the viscosity of the dispersion is less dependent on molecular weight than its solventborne counterparts. 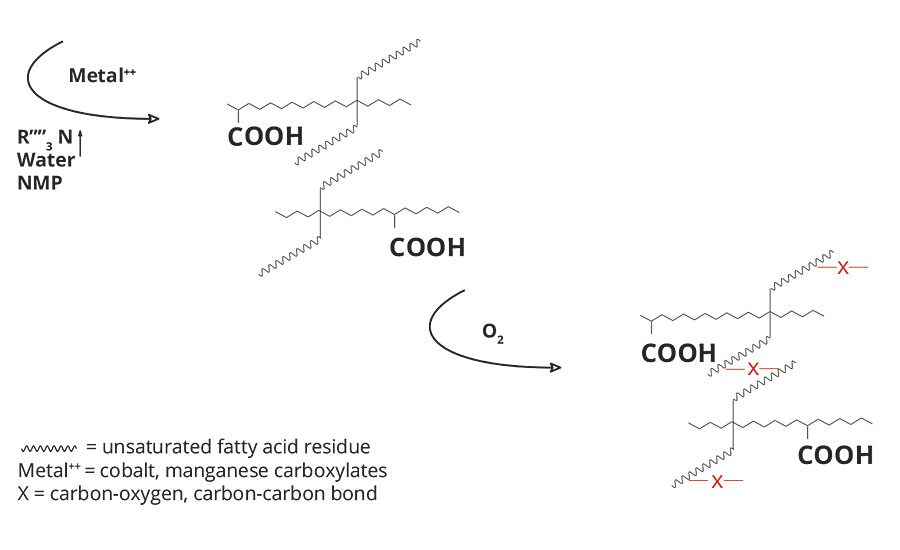 The waterborne approach overcomes slow dry and soft film issues commonly seen in lower VOC solventborne approaches due to the high molecular weight of the urethane dispersion, and therefore it is a solid technical approach for continuing VOC reduction in the future. Since the film crosslinking is through oxidative cure, the “post-crosslinking” reaction that happens during or after film formation imparts the film with good mar resistance and black heel mark resistance similar to the solventborne OMU. The high-molecular-weight polymer and urethane linkage not only improves hydrolytic stability, but it also improves abrasion resistance, which is important for hard floor finishing applications. Table 4 compares the performance of a first-generation waterborne OMU varnish (WB OMU I) to a 450 g/L VOC conventional solventborne OMU varnish. 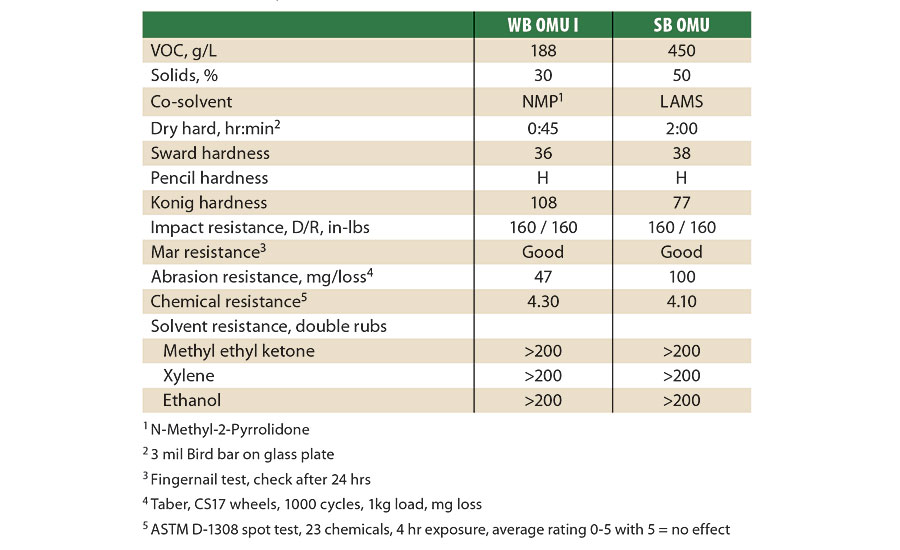 Similar to other PUDs, most waterborne OMUs contain NMP as co-solvent. The co-solvent in PUD aids in the synthesis process and in film formation. Today, though many PUDs contain NMP, it is becoming an issue in many applications. Another drawback for waterborne OMU compared to solventborne OMU is lower solids content, which affects film build.

A second-generation solvent-free waterborne OMU (WB OMU II) was developed, and though it can form a high-gloss film, post adding co-solvent is recommended to achieve maximum film performance. Since the co-solvent is added in the formulation stage, the reactivity of the co-solvent to isocyanate is not an issue. The real benefit of the solvent-free waterborne OMU is that it offers a wide latitude in solvent selection and it is easy to formulate a NMP-free varnish that has the same VOC and film performance as the NMP-containing waterborne OMU, though the additional solvent lowers the solids content of the varnish. 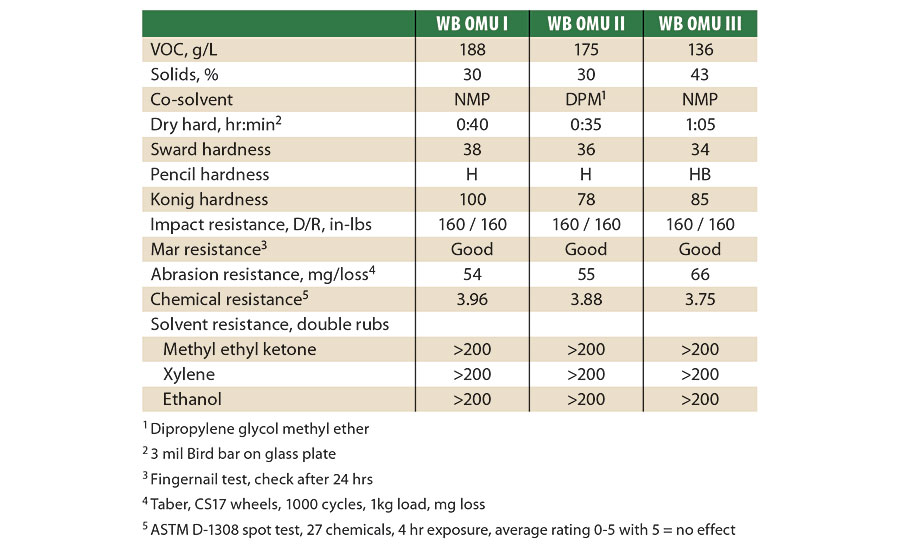 In general, PUDs are linear polymers or low-crosslink-density precrosslink polymers. These PUDs have been used to formulate 1K or 2K finishes for wood floor coatings for many years. To compare these PUDs with waterborne OMU, a PUD with good hardness and chemical resistance was selected to compare with WB OMU II side by side. This PUD was formulated with a recommended formulation package developed for wood flooring applications. To help with film coalescence, more co-solvent was added into the system to take it to a VOC of 275 g/L. To understand the effect of crosslinking on film performance, polyaziridine was added at 2% to one of the formulated varnishes. As shown in Table 6, it is obvious that post-crosslinking enhances mar resistance. 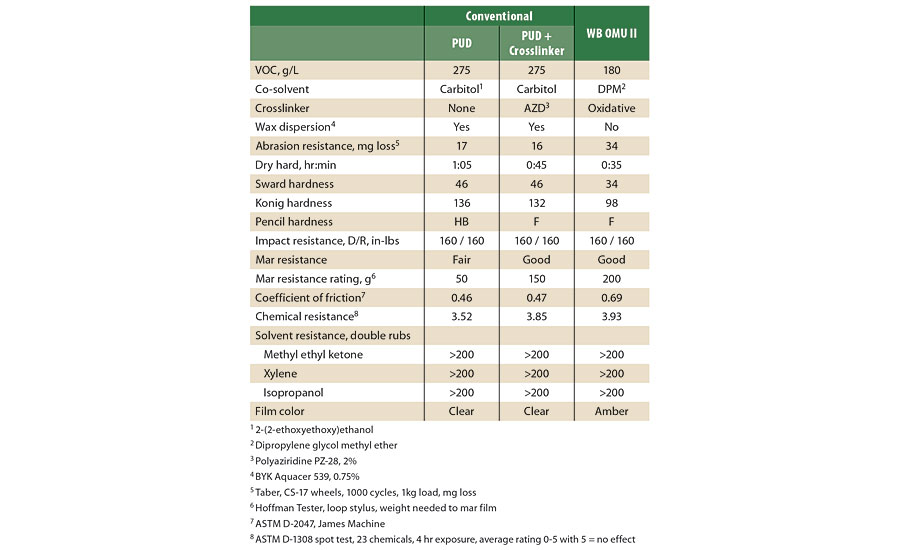 Wax dispersion can be added into PUD to help improve mar resistance, but the selection must be done very carefully since it also lowers the coefficient of friction, which makes the coating film slippery. To achieve mar resistance in conventional PUD, the urethane needs to have higher hardness. The harder PUD will also require more co-solvent for film coalescence, which in turn increases the VOC of the PUD. Alternately, waterborne OMU does not need to have a high hardness urethane backbone or additional co-solvent to achieve mar resistance since it has inherent mar resistance from post-crosslinking at a lower VOC. Waterborne OMU is also a stable, one-component biorenewable system that does not require the use of external crosslinker.

For over 50 years, vegetable oil-based oil-modified urethanes and uralkyds have been used in a wide variety of wood coatings for both professional and do-it-yourself (DIY) markets, and these resilient polymers are still preferred today. Conventional solventborne OMUs have a VOC content over 450 g/L, so as VOC regulations tighten, research and development has focused on lowering the VOC of these polymers. The high solids and exempt solvent approaches have dominated solventborne OMU and uralkyd product development, but by combining the two approaches, a varnish that meets current VOC regulations for most states has been recently commercialized. With these regulations continuing to tighten, the waterborne OMU is the best option. Waterborne OMU has all the advantages of solventborne OMU including inherent mar resistance, chemical resistance and amber film color, while overcoming the shortcomings of low-VOC solventborne OMU including slow dry and softer film. Recent research efforts have led to products that are high solids, NMP free and supplied at less than 100 g/L.