Corrosion Effect on Hardness of Steel Screws by Nanoindentation

As the most common failure mechanism in industry, corrosion of materials costs hundreds of billions of dollars annually to the U.S. economy.1 It is critical to implement optimal corrosion control practices to improve lifecycle and asset management. Accelerated corrosion tests can substantially increase the measurement speed compared to those carried out in natural weathering. Laboratory corrosion tests that closely simulate the atmospheric effects on the corrosion mechanism of materials significantly facilitate the quality control and R&D of new materials and protective coatings for applications in aggressive environments.

The mechanical properties of materials deteriorate during the corrosion process. For example, lepidocrocite (g-FeOOH) and goethite (a-FeOOH) form in the atmospheric corrosion of carbon steel. Their loose and porous nature results in absorption of moisture and in turn further acceleration of the corrosion process.2 Akaganeite (b-FeOOH), another form of iron oxyhydroxide, is generated on the steel surface in chloride-containing environments.3 Nanoindentation can control the indentation depth in the range of nanometers and microns, making it possible to quantitatively measure the hardness and Young’s modulus of the corrosion products formed on the metal surface (Figure 1). It provides physicochemical insight in the corrosion mechanisms involved so as to select the best candidate material for the target applications. 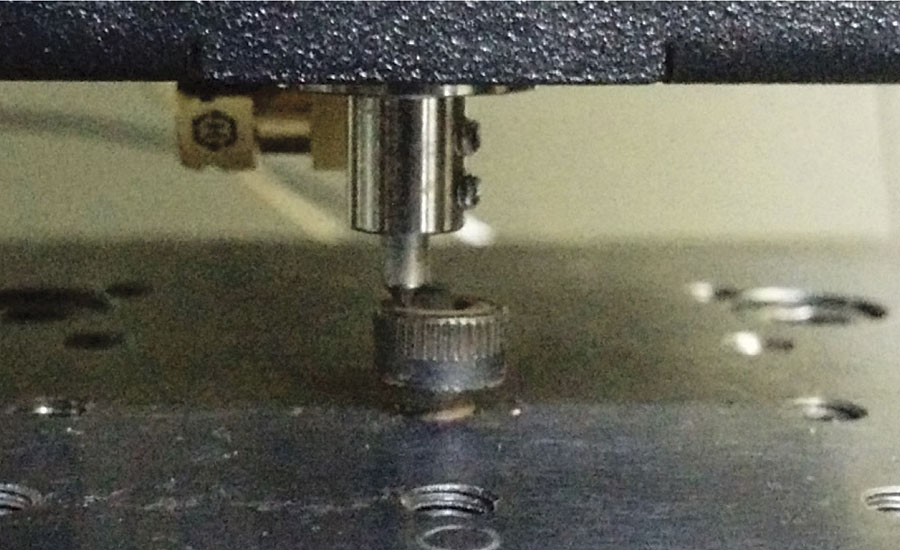 FIGURE 1 » Indenter on the corroded screw.

In this application, we showcased that the Nanovea Mechanical Tester in nanoindentation mode measures the effect of rust in the corrosive media on the evolution of the mechanical properties of two types of steel screws.

In this study, the nanoindentation tests were performed on the screws made of two types of steel, namely stainless steel 316 (SS316) and alloy steel with a black oxide surface finish, respectively. The screws were immersed in 3.5 wt. % NaCl solution for 7 days and 14 days. This was followed by cleaning and rinsing by isopropanol and acetone solutions before the nanoindentation tests. The new screws without the corrosion process were also tested for comparison. The nanoindentation test conditions are summarized in Table 1. More than 10 tests were performed at each condition to ensure repeatability of the measurement. 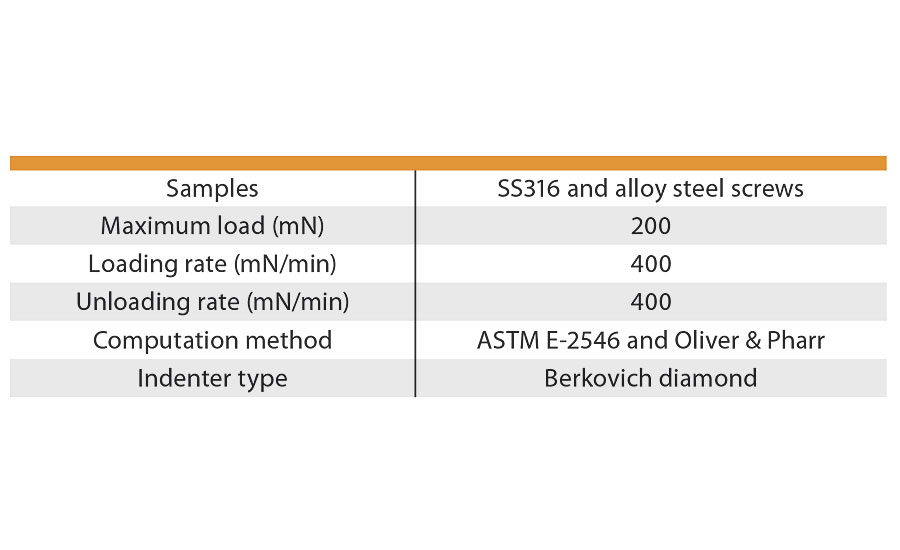 TABLE 1 » Test conditions of the nanoindentation after the corrosion tests.

The load vs. displacement plots of the nanoindentation tests on SS316 and alloy steel screws after different corrosion time is shown in Figure 2. The hardness as a function of the corrosion time is plotted in Figure 3. The SS316 screws exhibit consistent mechanical behaviors during the 14 days corrosion test in the 3.5 wt. % NaCl solution. It possesses a constant nanoindentation hardness of ~4.5 GPa, calculated from the comparable load-displacement curves. In comparison, the alloy steel screw shows a high surface hardness of 6.7 GPa, thanks to the mechanical enhancement by the black oxide surface finish. However, after the alloy steel screws are immersed in the NaCl solution for seven days, the surface hardness is reduced to ~4.6 GPa. 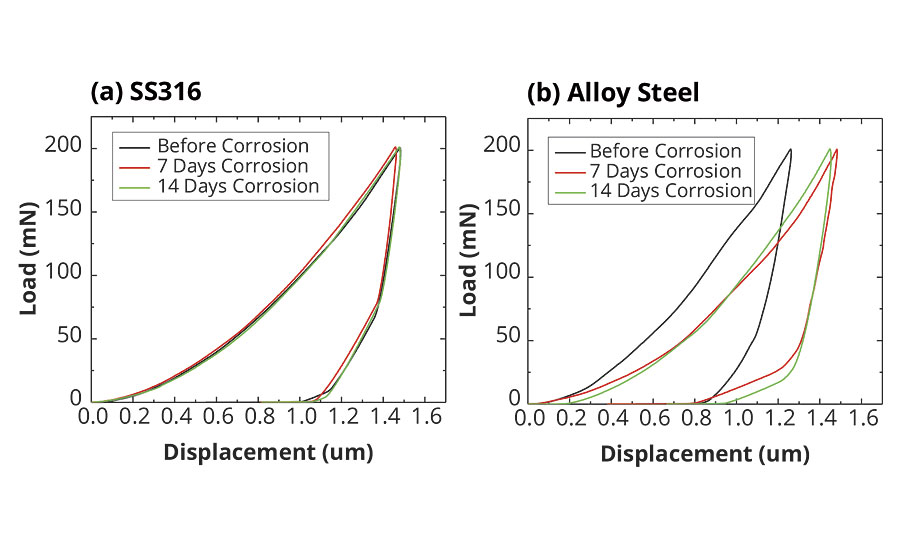 FIGURE 2 » The load vs. displacement plots of SS316 and alloy steel screws before, and after 7 and 14 days corrosion tests. 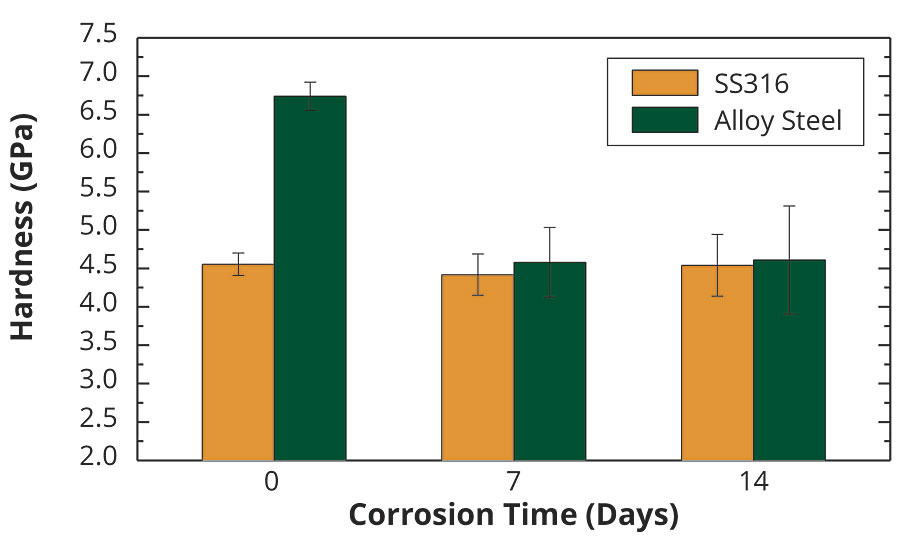 FIGURE 3 » The evolution of hardness as a function of the corrosion time. 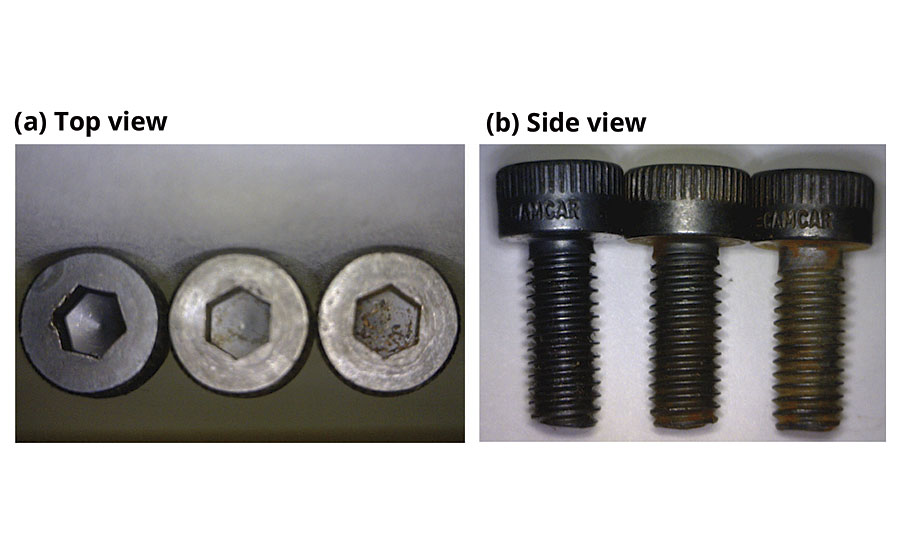 FIGURE 4 » Top and side views of the alloy steel screws before, and after 7 and 14 days corrosion tests (from left to right). 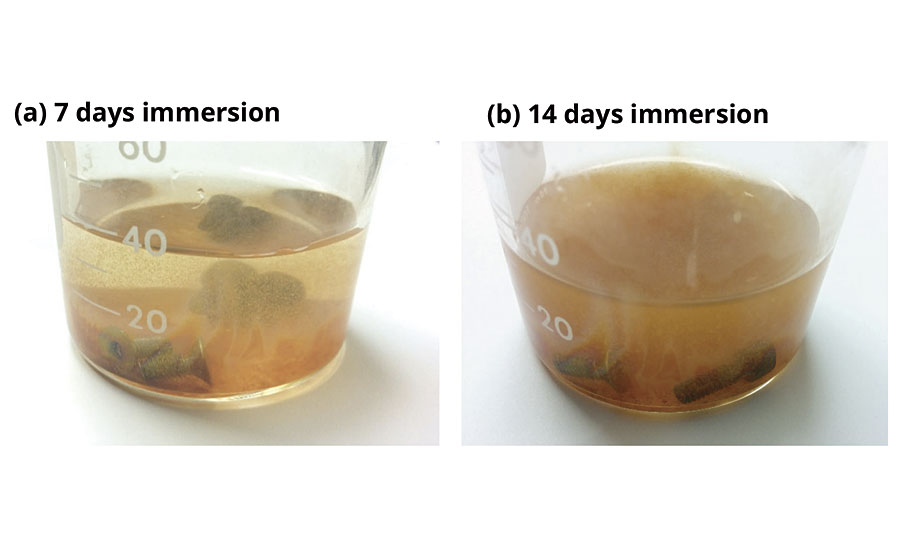 Accelerated corrosion tests in the corrosive media that simulate nature’s weathering effect on metals have strategic importance in the quality control and R&D of new materials and protective coatings serving in the corrosive environment. Nanoindentation allows one to quantitatively evaluate the impact of corrosion on the mechanical properties of various metals or coatings for the target applications. The evolution of the mechanical properties on the surface provides us further physicochemical understanding of the deterioration mechanisms involved in the formation of the corrosion products, which is critical for various industrial applications such as in the oil and marine industries. Stainless steels as reinforcement compared to carbon steels can enhance the durability and reliability of the mechanical parts exposed to aggressive environments.

The Nanovea Mechanical Tester performs the nanoindentation test on two sets of screws made of SS316 and alloy steel, respectively. Accelerated corrosion tests in the salt solution provide results more quickly than those obtained from natural weathering, which facilitates the development of new alloys and protective coatings. Corrosion has a negative impact on the surface mechanical property such as hardness on the alloy steel, reducing the surface hardness from ~6.7 to ~4.6 GPa during the first seven days immersion in the 3.5 wt.% NaCl solution. This value stays constant in the following seven days corrosion test. In comparison, the corrosion-resistant SS316 screws exhibit constant hardness throughout the corrosion test, which demonstrates the importance of corrosion resistance to the reliability of the mechanical properties.

The tester provides multifunction nano and micro/macro modules on a single platform. Both modules include scratch tester, hardness tester and wear tester modes, providing a wide and user-friendly range of testing.