Shear rheology has long been used to characterize flow properties of waterborne coatings. However, traditional rheological measurements do not adequately characterize the development of mechanical properties during drying. This is due to the inherent limitations of parallel plate or cone and plate testing fixtures, which do not expose the coating surface to the environment and prevent evaporation. In parallel plates, the drying process is limited by the rate of diffusion from the center of the plate to the outer edge.

In this study, novel testing geometries are used to measure changes in viscoelastic properties of waterborne coatings during drying. While traditional parallel plates prevent the majority of sample from drying, these open geometries allow evaporation to occur more readily. Unlike existing methods to study rheological changes during drying, which rely on measuring relative changes of a coating on a substrate, this technique provides a quantitative measurement of viscoelastic properties.

All rheology testing was performed using the Discovery Hybrid Rheometer-3™, configured with a testing chamber to control relative humidity and temperature (Figure 1). The chamber employs two mass flow controllers to provide purge gas at the commanded relative humidity. One controller supplies dry gas (nitrogen) while the other provides saturated gas. The ratio of the two gas streams is adjusted by the system to achieve the desired humidity level, maintaining a constant flow rate of 1 L/min. Temperature is controlled through Peltier elements located in the walls of the chamber. 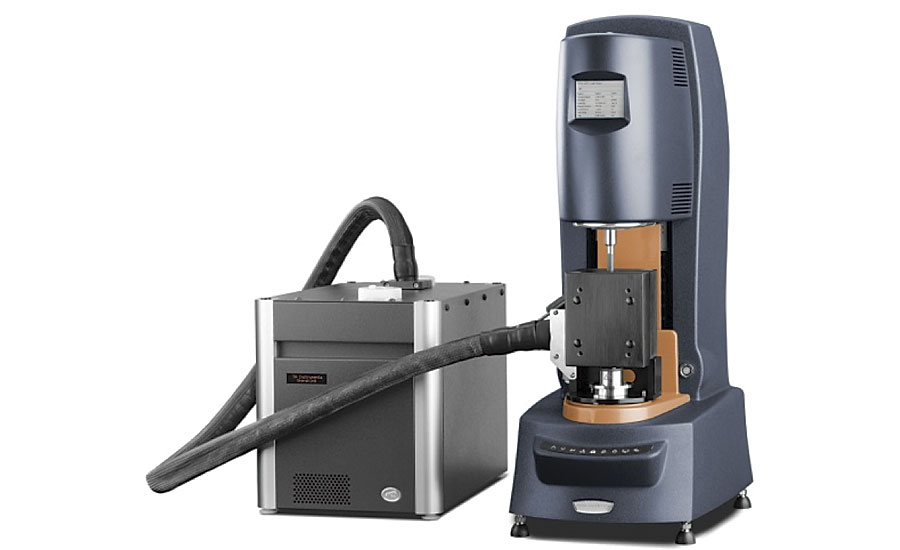 The testing geometries are specially designed to allow for measurements of shear rheology during drying. To measure bulk rheological properties during drying, an annular ring-shaped geometry is used. A ring with a pointed edge is used at the surface of the paint to measure the modulus of the surface during the initial film formation, or “skinning.”  These geometries are shown in Figure 2. A commercial water-based latex paint was used for all testing. The labeling indicates humidity less than 89% is required for film formation. 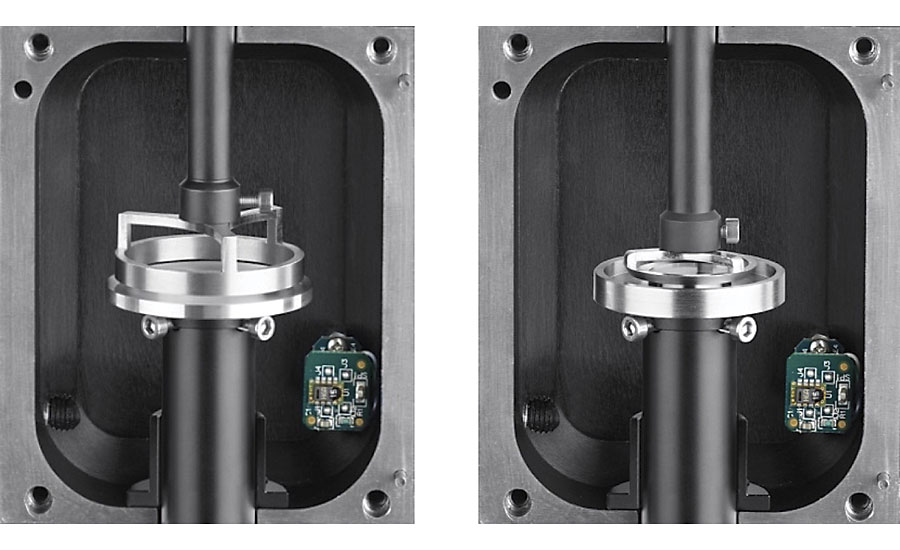 Shear rheology is widely used to characterize paints and coatings in their liquid state using parallel plates (Figure 3). One challenge associated with this measurement is the evaporation that occurs at the exposed edges of the plate. Drying at the edges can occur quickly and has a significant effect on the measurement of modulus or viscosity. This can be minimized by using a solvent trap around the sample, or using a Couette geometry, but these approaches do not completely prevent evaporation. 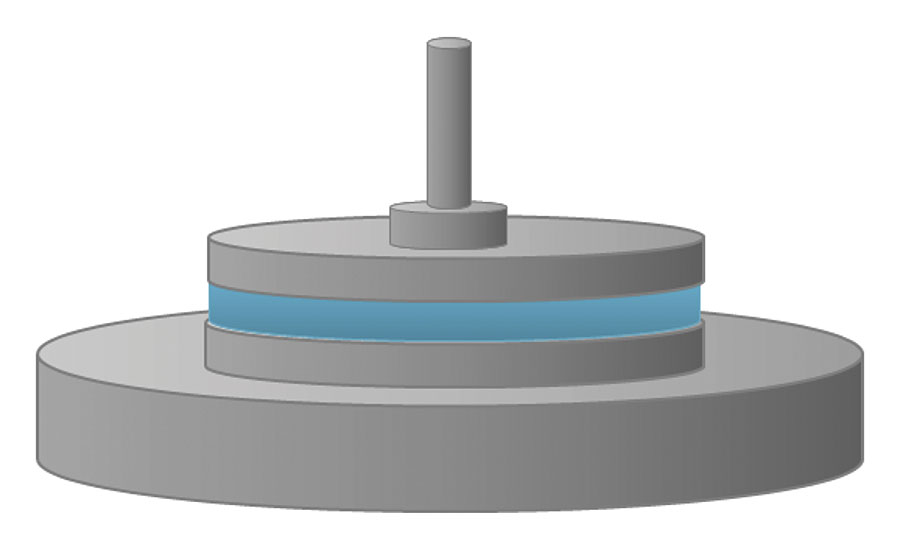 An alternative approach is to test in a controlled humidity environment, which will either prevent or significantly slow evaporation. Such a testing environment is advantageous when measuring time-dependent rheological changes. The microstructure of paint formulations is highly time dependent by design to achieve stability against settling, ease of application and leveling properties. Therefore, there is a practical need for testing capabilities over longer periods of time than those achievable by existing methods.

The time-dependent structure in paint is often measured using a pre-shear to break down the structure, followed by an oscillation measurement over time, monitoring the changes in viscoelastic properties.2 This test was performed using two configurations. The first was a 25-mm plate and lower Peltier plate for temperature control, open to the environment. The second was a 25-mm parallel plate inside a chamber controlled to 80% relative humidity.

An initial shear rate of 100 sec-1 was applied to the paint for 10 sec, followed by an oscillation of 1% strain at a frequency of 1 Hz. Figure 4 shows the measurements made in these two environments. Both show a loss modulus initially higher than storage modulus, representing the more viscous response of the paint after shearing. An increase in elasticity occured in both tests, but the sample tested under ambient conditions shows a more rapid increase, due to surface drying. The testing performed under 80% relative humidity shows an increase in modulus that accurately reflects the microstructure rebuilding after the applied shear, without the effects of edge drying. 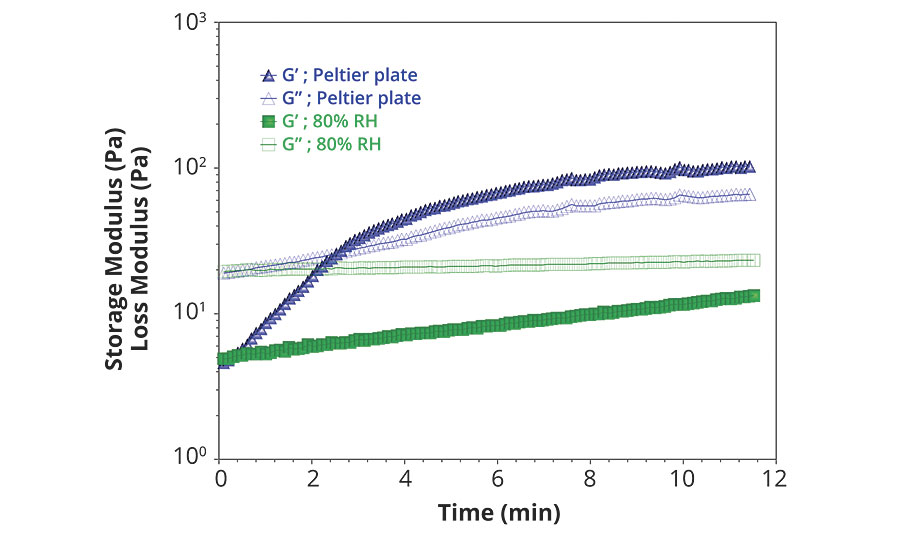 When measuring time-dependent changes in structured fluids such as paint, it is difficult to determine if drying is occurring from the data alone. Materials that are not time dependent are expected to show no change in modulus over time, and in such systems an increase in storage modulus is a clear indication of drying. However, many paints will build structure over time at rest, also indicated by an increase in storage modulus. Because these changes manifest in similar ways, it is especially important to prevent drying to accurately measure the true rheological changes. 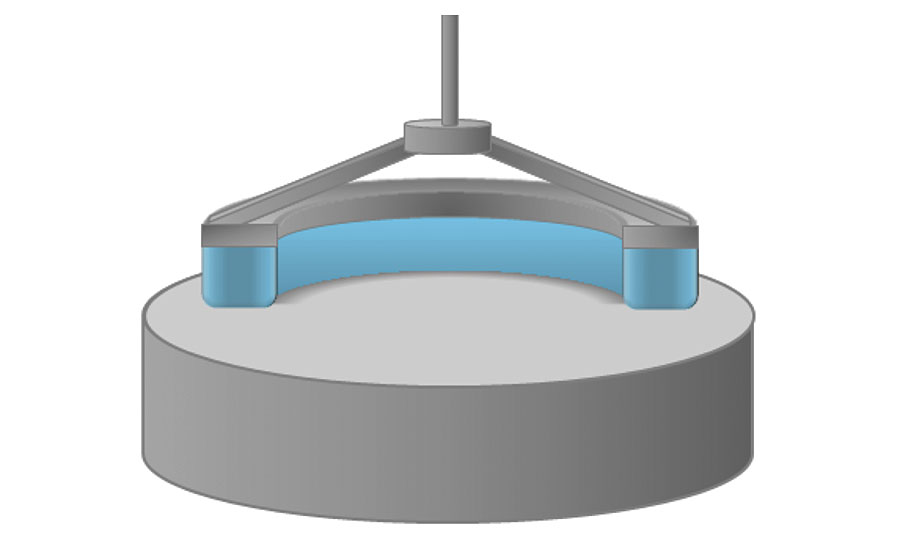 The bulk diffusion of the paint was measured using the annular ring under three levels of relative humidity: 0%, 40% and 80%. Temperature was held at 25 ˚C. An oscillation strain of 1% was applied, using a frequency of 1 Hz, over 5 hrs. The results are shown in Figure 6. 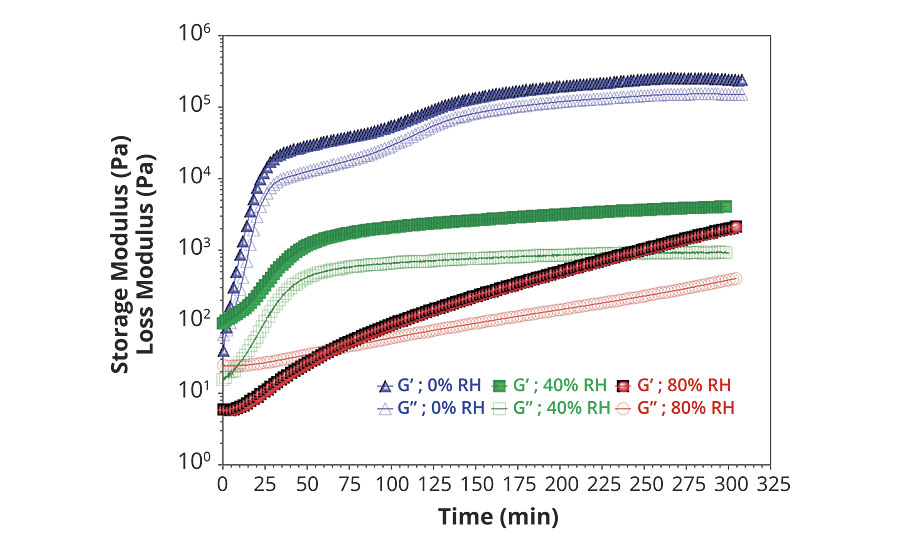 Under dry conditions, the modulus reaches an initial plateau around 30 min, when the surface evaporation creates a solid film. The bulk diffusion occurs more slowly after the initial film formation, and plateaus after 5 hrs. Under the 40% relative humidity environment, an initial plateau is seen after 1 hr, and very little increase is seen in the remaining time. The higher level of humidity slows the initial film formation, and the modulus is significantly lower. In the 80% relative humidity environment, the film formation is not seen as a separate event. Surface diffusion and bulk diffusion appear to occur at the same rate.

A sharp-edged ring was used to measure the mechanical properties of the surface during drying (Figure 7). This design is a variation on the double wall ring previously developed for measuring interfacial rheology.3 The sample was loaded into a well, and the ring edge was placed at the surface. The measurement reflects the modulus of the two-dimensional surface, not the bulk modulus. This measurement represents film formation, or “skinning.”  In evaluating a coating, the rate of film formation is as important as the rate of bulk drying. 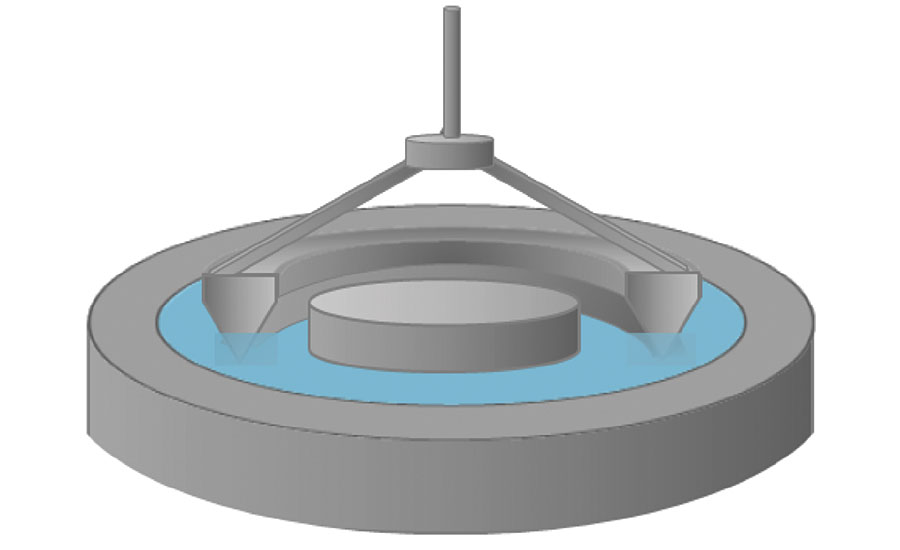 The surface diffusion of the paint was measured at 0%, 40% and 80% relative humidity. A strain of 1% and frequency of 1 Hz were used. The steady-state verification setting in the software was used to terminate the test once equilibrium was reached (defined as storage modulus consistent within 1% for 10 consecutive measurements). The results are shown in Figure 8. Under the dry environment, the surface modulus plateaus within a short time, similar to the initial plateau seen in the bulk diffusion measurement. In a 40% relative humidity environment, the surface diffusion is considerably slowed, but shows a modulus crossover at 47 min. This indicates an apparent gel point, at which the surface properties transition from liquid-like to solid like. The surface modulus plateaus after roughly 4 hrs. The lower modulus value suggests the film formed under these conditions is less rigid than the film formed under dry conditions. At 80% relative humidity, the surface diffusion measurement does not show a clear film formation. The modulus increase is a combination of the surface and bulk diffusion, and not a true surface rheology measurement like the tests under drier conditions. 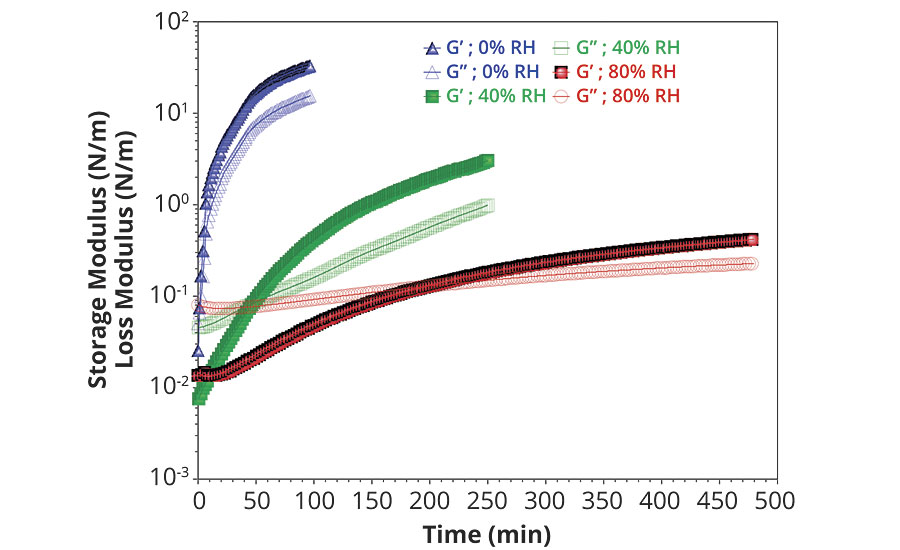 Further testing of paint using this capability would explore the effects of both humidity and temperature. This would provide more insight into the drying process in a range of conditions relevant to the final application of a coating. Quantitative measurements of both film and bulk properties improves understanding of conditions needed to achieve properties and can aid in product development.