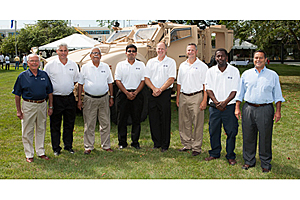 Hentzen has been a leading provider of military coatings for over 30 years, leading the world in liquid and powder CARC coating developments. Starting with lead- and chromate-free primers (MIL-P-53022) and topcoats (MIL-C-46168) in the early 1980s, and continuing with at least seven major CARC first-approvals in the years since, Hentzen has consistently demonstrated its leadership in CARC technology development. Hentzen currently supplies almost two-thirds of these military specification products globally.

John Mort, Hentzen’s Sales Manager for defense products, commented, “We are excited to be able to once again offer an industry-first technology in support of the military market. Along with our CARC powder primer, which was approved in 2003, we are pleased to be able to offer a full powder coatings solution to the defense industry.”

Hentzen Coatings Inc. is a leading manufacturer of general industrial, military, and aerospace coatings in North America, with international sales.

How Can the Weather Impact Your Powder Coat?

How Has the Pandemic Shifted Color Trends for 2022?

In this webinar, we will demonstrate how silane and silicone technologies can modify polyaspartic chemistries to increase performance characteristics of traditional metal coating finishes. In particular, we will highlight technical capabilities of glycolic silane technology that can enable coating system formulations to be virtually free of latent alcohol or other VOC emissions.

This webinar will discuss the different chemistries of fluorosurfactants and other additives and how this affects their performance in coatings. Fluorosurfactants are multifunctional and direct one-for-one replacement is rarely possible, but careful selection of additive combinations can achieve comparable performance in different coatings formulations.
View All Submit An Event