In the first section of this article, the chemical background of this additive class is explained. The second section explains the mode of action in typical release additive applications and the basic effects of different types of silicone-based release additives. Finally, the basic formulation principles are explained.

The most simple route to a silicone-based release additive is to obtain polydimethylsiloxane (PDMS) from dichlorodimethylsilane (Figure 1), which is readily available via the Müller-Rochow synthesis2 on industrial scale, via a hydrolysis-condensation reaction (Figure 2).3 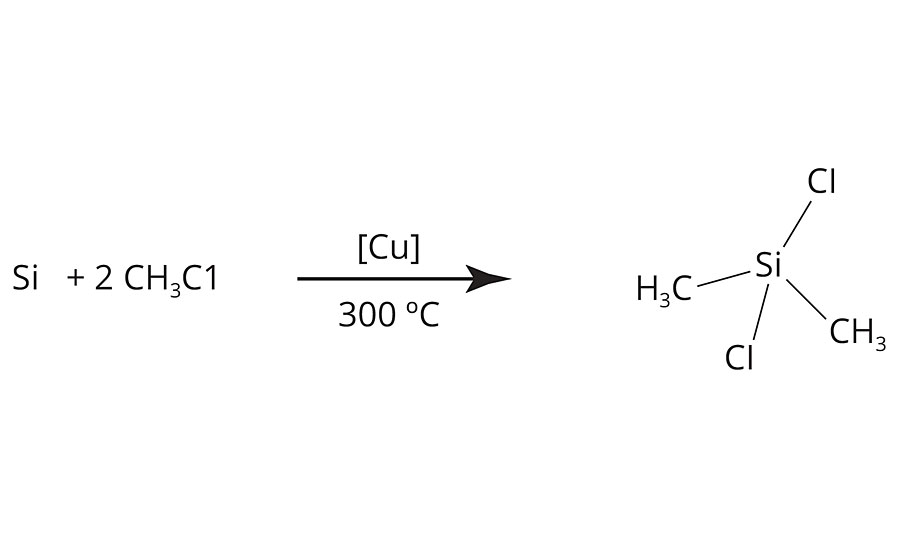 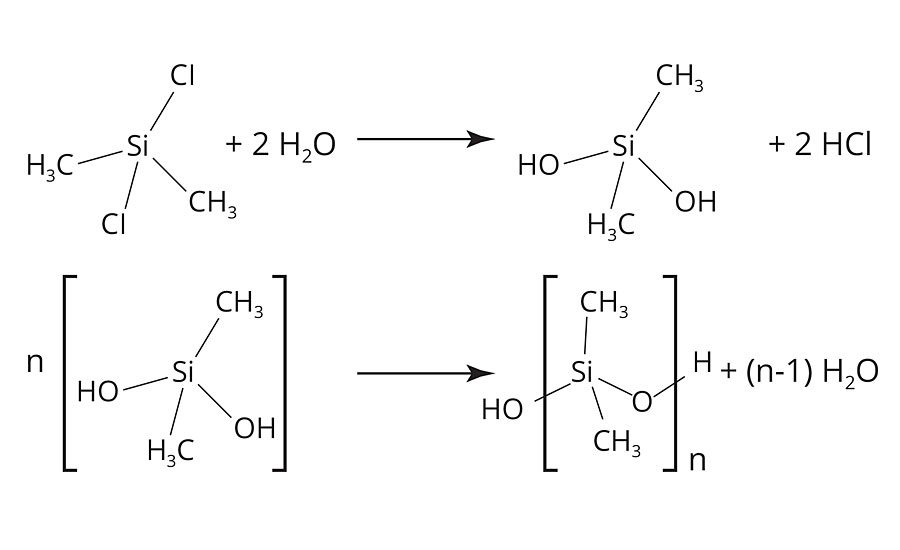 FIGURE 2 » Synthesis of polydimethylsiloxane via a hydrolysis-condensation reaction.

The obtained PDMS typically consists of 30-50 repeating units. For further fine-tuning of the polymer, equilibration processes are utilized. Under the influence of catalysts, the PDMS polymers are forced into a condensation (water removal) reaction; this yields a PDMS polymer with a higher number of repeating units (Figure 3).4 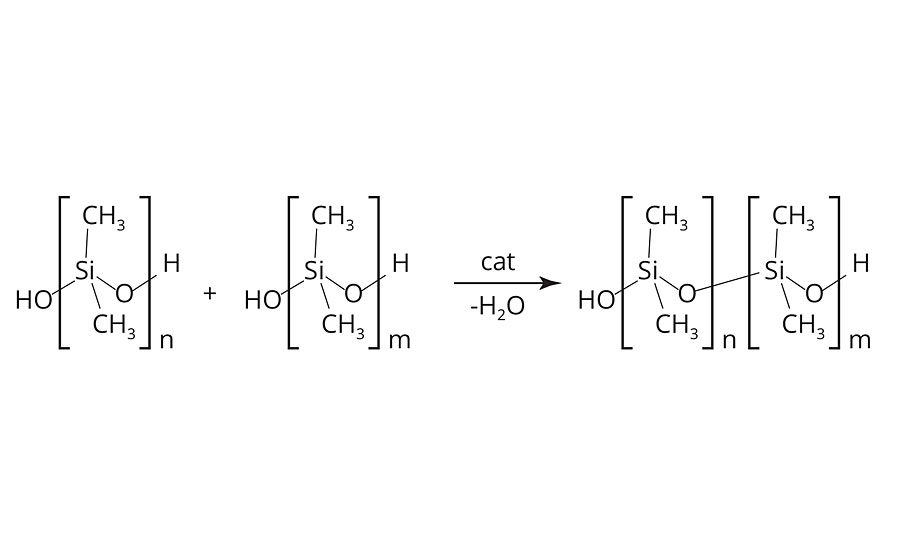 The condensation reaction is terminated by the addition of “end cappers,” such as  (H3C)3Si-O-Si(CH3)3. Thus, the number of repeating units and the molecular weight of the PDMS are controlled (Figure 4). Alternatively, the termination of the condensation may also be established with mono-functional chloroalkylsilanes (Figure 5).5 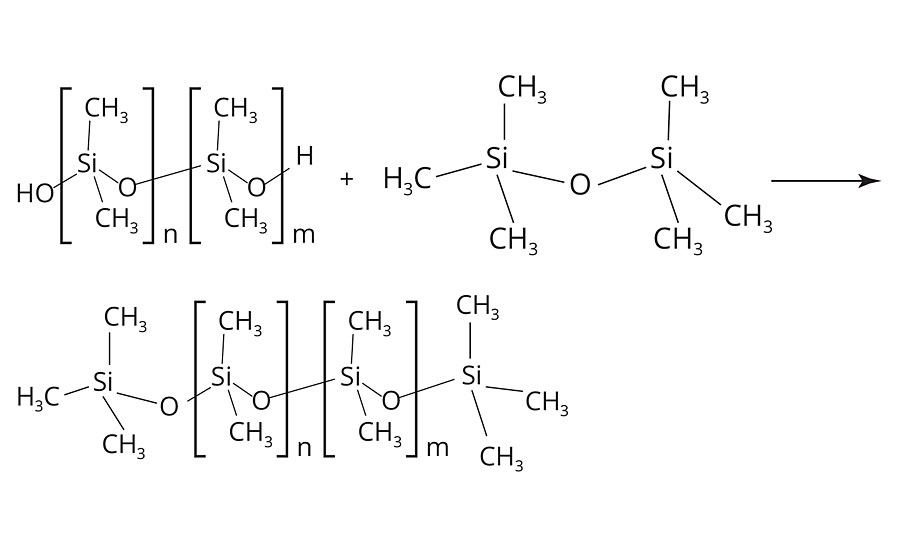 FIGURE 4 » Termination of the condensation reaction of polydimethylsiloxanes via “end cappers”. 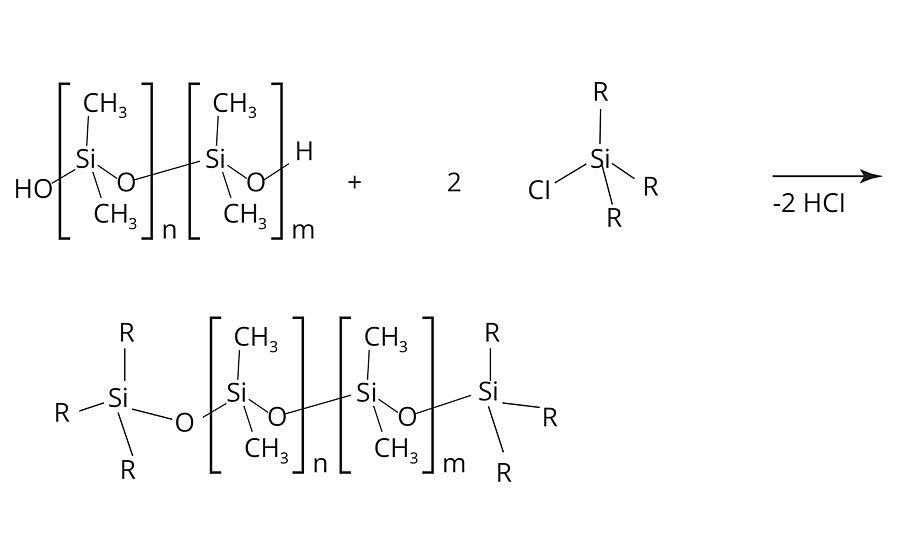 FIGURE 5 » Termination of the condensation reaction of polydimethylsiloxanes via mono-functional chloroalkylsilanes.

To obtain crosslinkable siloxanes, acrylate functionalities are introduced into the polymer.6 In principle, two main options for the modification are possible: 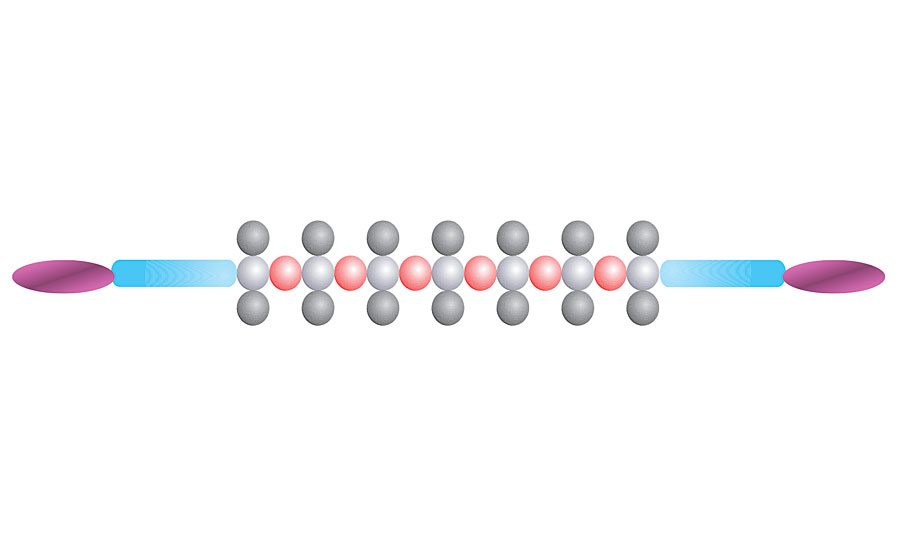 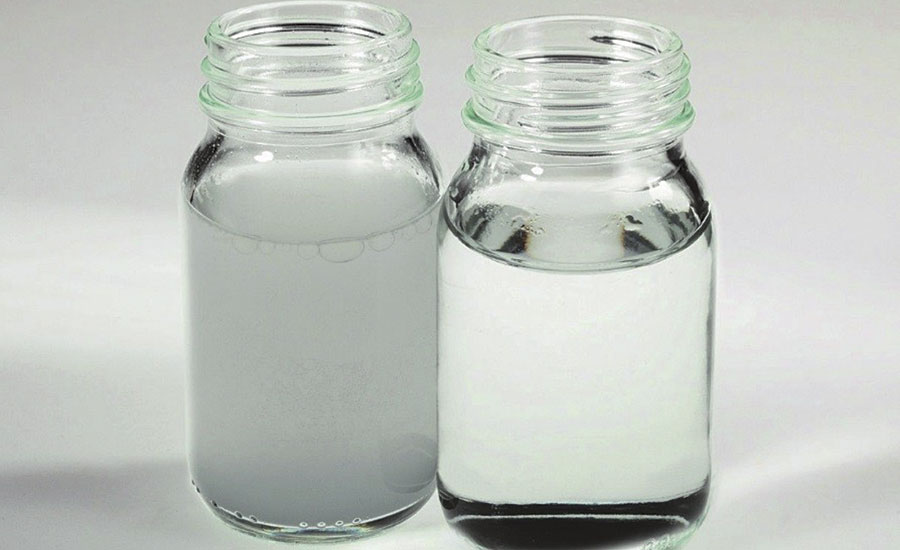 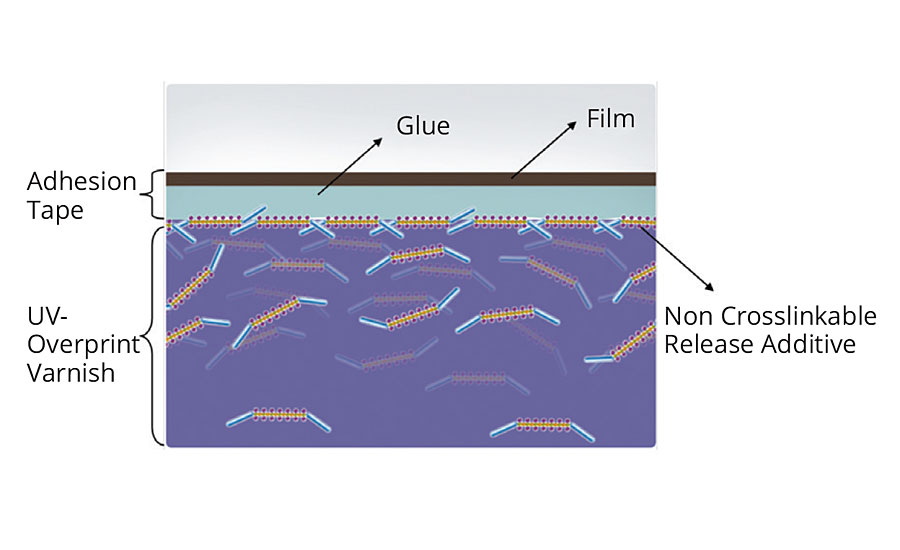 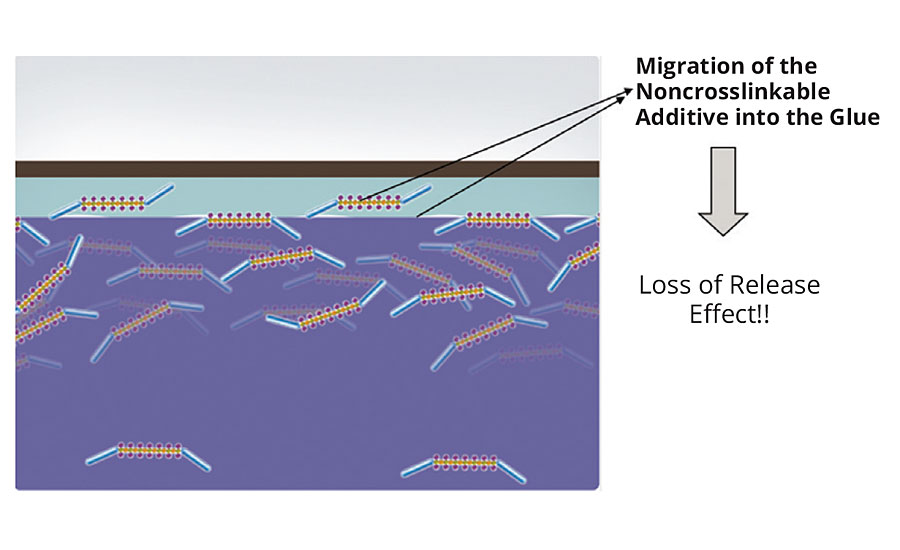 If a crosslinkable release additive is used, most of the additive molecules will be permanently anchored due to the crosslinking of the double bonds of the attached acrylate groups. When, for example, a label is placed on this coating, the crosslinked release additive molecules remain in place and do not migrate into the glue layer; thus, the release effect maintains a high level of performance for a prolonged time (Figure 10). 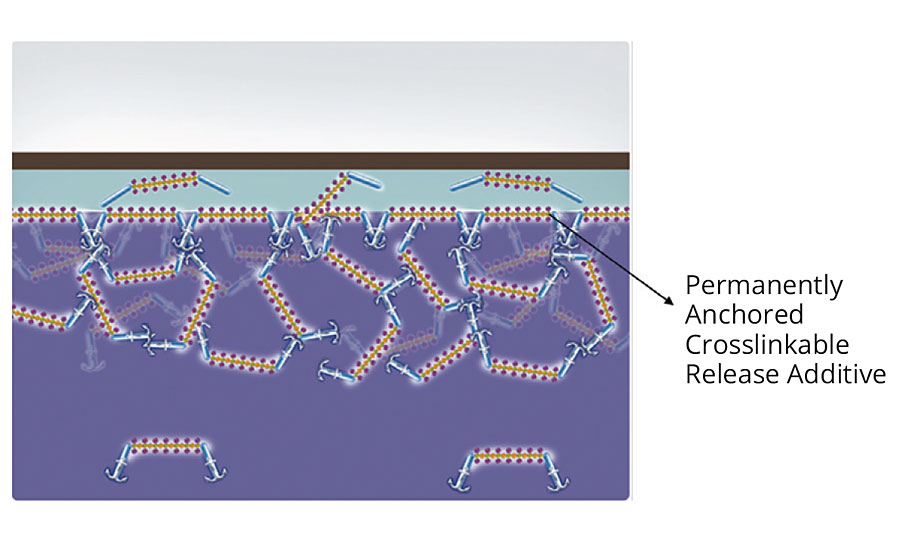 Crosslinkable release additives are important when long-lasting release effects are required in printing applications. As explained in the previous section, the ability to incorporate the release additive permanently into the coating or ink layer via the crosslinkable acrylate groups offers a major benefit when durability is desired. The acrylate groups form a network with the binder upon radiation curing, thus minimizing the tendency of the additive to migrate. In this way, longer-lasting surface effects can be achieved.

In a formulation, the main goal is to level out release properties and maintain a smooth surface. A common approach includes using a combination of radiation-curing additives. Typically, additives that yield good leveling properties are combined with additives that yield excellent release properties. Depending on the formulation and on the polarity of the system, different combinations and ratios of the radiation-curing additives are necessary. The most common approach is to first choose the appropriate release additive, then choose the appropriate combination partner to achieve the desired leveling. Figure 11 illustrates the release effect of various additives. Therefore, if maximal release is desired, Rad 2800 is the product of choice. 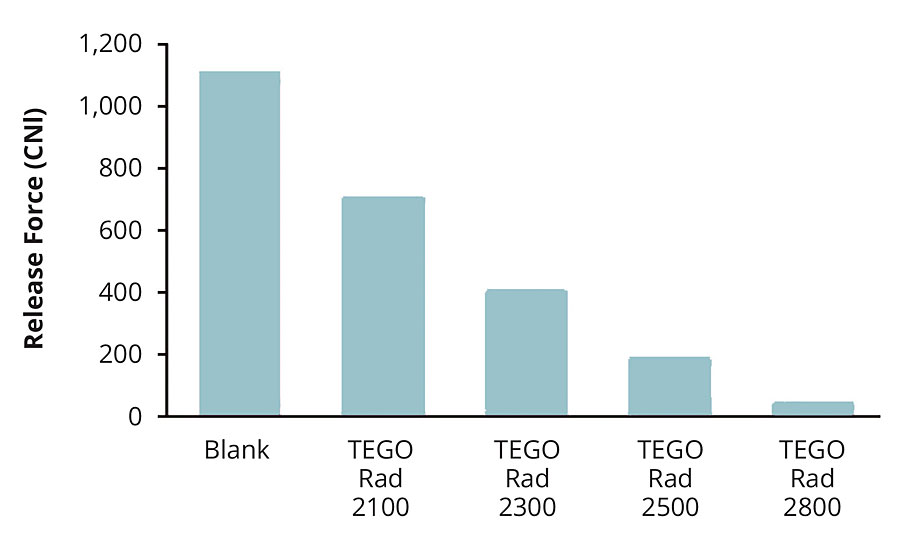 Radiation-curing additives are a range of modified silicone-based additives with organic modification. They bear acrylate groups, thus they are crosslinkable, which equips them with unique properties. Depending on the silicone character and on the degree of organic modification, they improve slip, substrate wetting and anti-cratering, scratch resistance, and leveling. Furthermore, some of them have release and defoaming properties.

The use of Rad 2200 N, 2250 and 2300 allows formulators to achieve good slip and flow in print varnishes, resulting in defined surface smoothness and good haptic qualities. Because of their outstanding compatibility, their use does not impair transparency. Rad 2500, Rad 2650 and Rad 2800 distinguish themselves particularly by their good release effect, so adhesive strips can be easily detached without leaving residue.

This article has also appeared in PPCJ and Boytürk magazines.

By Thorsten Schierle, Director for Applied Technology, Inks, Digital and New Applications, Evonik Resource Efficiency GmbH, Essen, Germany
You must login or register in order to post a comment.