Lexus and VIAVI Solutions Crack the Code on Bioinspired Color

Throughout history, mankind has attempted to simulate striking colors found in nature. When you see the brilliant orange and silvery blue color emitted by a neon tetra fish or the varied and vivid colors of a hummingbird, it’s not due to natural pigmentation in their scales or skin. These creatures contain a unique and colorless nanostructure that reflects or absorbs certain wavelengths of light to create what is called “structural color”.

The quest to create bioinspired colors that reflect the purity and brilliance of colors found in nature is not just a scientific or artistic pursuit, but also an economic one. Global brands are constantly leveraging breakthroughs in physics and materials science to create cutting-edge designs, special effects and differentiated colors that boost the value of their products. The auto industry in particular leverages unique colors and effects to attract discerning car buyers that are willing to pay a premium for luxury models. Most recently, the release of the Lexus LC Inspiration Series edition in October 2017 turned heads with an extremely unique blue paint color called Structural Blue. The genesis of the lustrous Structural Blue color was inspired many years prior by the shimmering and iridescent wings of the morpho butterfly.

Structural colors have been challenging to recreate in commercial volumes due to the unique composition of natural materials with alternating patterns that can produce just the right amount of reflection or absorption of a color. These designs typically reflect 95-100 percent of a particular wavelength of light, creating deep, rich colors (Figure 1). Today’s automotive colors typically reflect 50-60 percent of light, and pigment manufacturers have struggled to attain the level of purity seen in nature – until now. 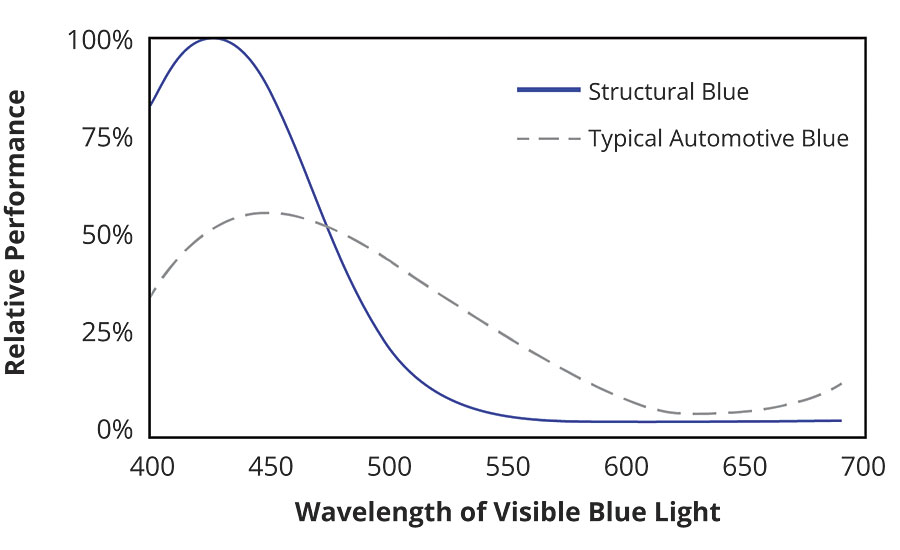 Debasish Banerjee, a Ph.D. physicist, has been investigating structural color for use in automotive coatings since 2005. He works under the lead of Minjuan Zhang, who holds a Ph.D. in Physical Electronics, and runs these efforts at Lexus Research in Ann Arbor, Michigan. The team had been studying structural color for several years, and Banerjee joined the group to help advance the effort.

“By basic nature of how light travels through structural colors, they change from one color to another when we look at them from different angles – it’s a really cool feature of structural color,” said Banerjee. “However, Lexus wanted to create an extremely unique and vivid effect that had minimal color shift. This was the biggest challenge we had to overcome.”

After 15 years of development and countless hours of collaboration across a number of experts, the global research group was finally able to crack the code on structural color, in partnership with specialty pigment-maker VIAVI Solutions. Together, they developed “omnidirectional” structural color that does not change when viewed from different angles. The car paint’s pure blue color produces a liquid metal effect with high chroma (intensity of color) and a high flip-flop (bright face and a dark off-angle color). Because the Lexus LC has a color unlike anything else available in the auto industry today, it’s already getting rave reviews.

Banerjee looked to nanoscale photonics as part of his approach to create a structural color with little or no angle dependence or color-shift.

“Initially I drew from advances in photonics research happening in the telecommunications industry. They were working on broadband, angle-independent, or omnidirectional, one-dimensional photonic crystals that don’t change their reflection band at various angles in the infrared wavelength area,” noted Banerjee.

Using an in-house simulation model, he experimented with high- and low-index materials to pinpoint a pair that could reflect the same wavelength of light from all viewing angles when combined into a multilayer structure. Banerjee finally landed on using titanium and hafnium oxides, utilizing the optimum refractive index difference between the two. While the effect was extremely close to nature, it required 31 layers of material to create, making it unsuitable as a pigment in an auto paint application.

In 2009, Minjuan Zhang and her team began collaborating with VIAVI Solutions to develop a nonshifting and omnidirectional structural color. In addition to being a global leader in optical filters for telecommunications and consumer electronics, the company is known for its ChromaFlair® interference pigment used in automotive special-option paint colors, including the Limited Edition 2006 Toyota Scion xB.

Together, the two companies tackled challenges to simplify the complex design. Based on discussions with VIAVI, Banarjee and Zhang modified the pigment layer architecture to fit VIAVI’s production requirements. An aluminum layer was added to boost reflectivity and provide hiding, eventually reducing pigment layers from 31 to seven. The VIAVI team then produced a prototype of what would become the groundbreaking OMNI Blue pigment used to create Structural Blue paint for a demonstration car. A design review of the car paint convinced executive management at both Lexus and VIAVI to continue supporting the effort.

Creating the pigment was one big milestone, while making a completely new pigment that was compatible with an automotive paint system was another. Zhang spent a year working with Lexus’s paint design group in Japan to achieve the second goal. Dispersion of the structural pigment in waterborne paint was finally realized, in collaboration with Nippon Paint Automotive Coatings and Toyo Aluminum in Japan. The U.S. and Japan teams worked together to finalize Structural Blue automotive paint, which made its debut on a Lexus LC model at the 2016 Geneva Motor Show. It became an instant sensation.

As each luxury car model is manufactured, VIAVI and Lexus are taking a craftsman-style approach to production. It takes eight months to produce enough pigment for 300 special-edition vehicles, and only two Structural Blue cars can be produced per day. Each of the special LCs contain over 300 billion pigment flakes that work as tiny microscale mirrors to generate the lustrous and exquisite color.

This “artisanal” approach reflects consumers’ growing appreciation for goods that are made in small batches with great attention to detail. In an era of mass production, it reflects the high quality and unique design that very selective car buyers want to associate with their personal brand. Consumer brands are capitalizing on this trend to differentiate themselves from the competition.

It took a large number of experts across geographic regions and disciplines over many years to commercialize this new pigment based on the mystery of color in nature. The development of the OMNI Blue pigment opens the door to creating a full palette of brilliant paint colors using the same raw materials and methods.

“Due to advances we’ve made with the OMNI Blue pigment, we now have the potential to create an infinite number of colors that produce the same breathtaking effect,” said Banerjee.