Characterized by a Polycarbonate-Based Polyurethane Polyol

Various functions have been required in these coating applications. For example, the chemical resistance of coatings to cosmetics, sunscreens and repellents has gained special attention in recent years. It is well known that certain chemicals in additives such as UV absorbers affect the quality of PU coatings. Conventional 2K PU coatings based on acrylic-urethane resins are not always sufficient to prevent the swelling or peeling caused by the chemical attack.

In this research, newly designed multifunctional polyol systems based on a polycarbonate structure and advanced polyisocyanate systems as crosslinkers were investigated in order to improve chemical resistance of coatings. As a result, it has been determined that the newly developed coating systems can remarkably improve not only chemical resistance but also adhesion to plastic substrates. Furthermore, the effects of the polyol systems on flexibility, impact resistance and hardness of the coating film were investigated compared with conventional coating systems.

In this article, the unique characteristics of the developed coating system will also be discussed by means of fundamental investigation of crosslinking structure and chemical interaction with UV absorbers.

In recent years, it has been considered that excessive exposure of leather sheet and plastic parts to chemicals such as sunscreen and insect repellent causes the degradation of coatings and the plastic parts themselves. The diffusion of certain chemicals in the sunscreen or insect repellent to the inside of the leather or plastic part has been proposed as a mechanism of these phenomena.1,2 2K polyurethane coatings are widely used in industrial fields such as automotive interior parts, however, it is not an exception, and 2K-PUs are also vulnerable to chemical attack. Conventional 2K PU coatings are commonly formulated with acrylic polyol, polyester polyol and polyisocyanate based on polyisocyanurates as well as polyurethane adducts. However, these coatings are not always sufficient to prevent the chemical attack by sunscreen and insect repellent. In order to improve the chemical resistance, much effort has been put into developing new coatings in recent years.3-7 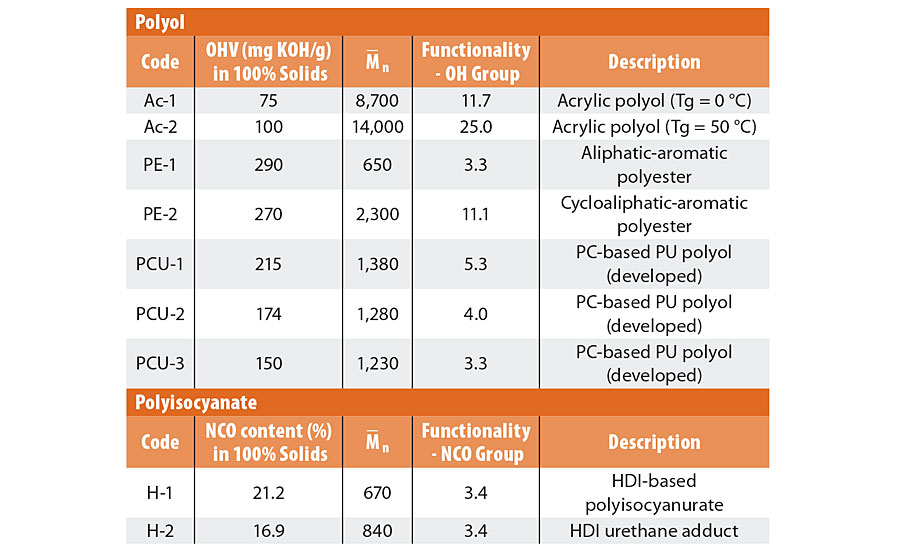 The details of preparation conditions for 2K PU coating films are shown in Table 2. 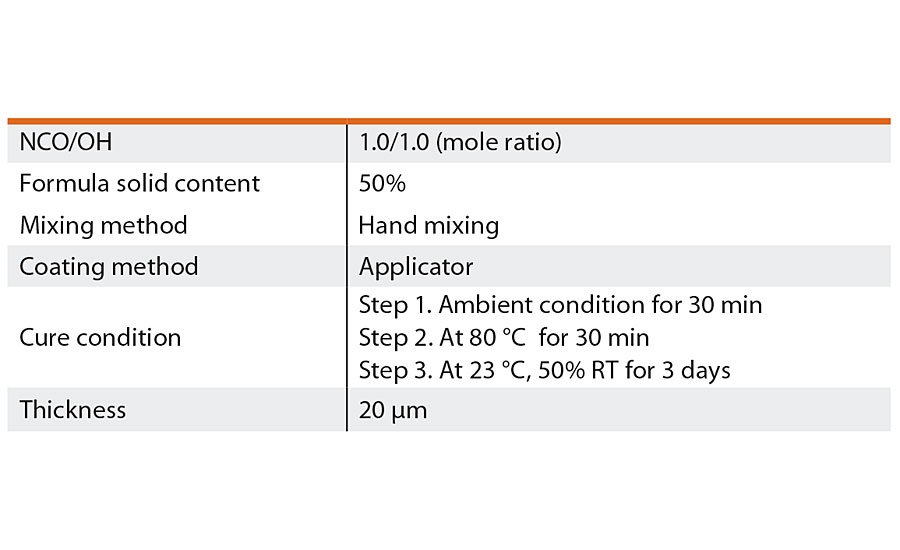 Evaluation Method of the Film Properties

The chemical resistance of the coating film to sunscreens and repellents was evaluated by observing the change in its appearance before and after dropping test solution, which consists of equal parts of weight 3-(4-Methoxyphenyl)-2-propene acid-2-ethylhexyl ester: UV absorber (Tokyo Chemical Industry Co., Ltd.), 3,3,5-Trimethylcyclohexyl Salicylate: UV absorber (Tokyo Chemical Industry Co., Ltd.) and N, N- Diethyl-m-toluamide (DEET): repellent (Tokyo Chemical Industry Co., Ltd.) (Figure 2). The ABS plate was used for the substrate. The test solution was dropped approximately 0.05g/cm2 to the surface of coating film in two different places. The test sample was placed in the oven for 4 hrs at 80 °C. After removal from the oven, the test sample was wiped with paper napkins. The evaluation was carried out based on the visual references that are shown in Table 3 and Figure 3. 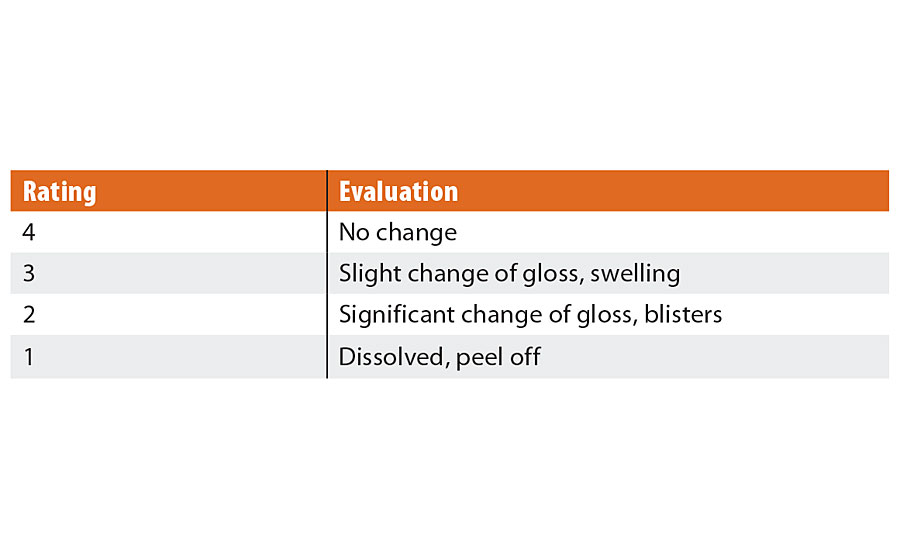 The ABS plate and the PC plate were used for the adhesion test. The test method for adhesiveness to ABS and PC was according to ISO 2409: 2013 (Cross-cut test). The film properties were evaluated by the following methods: bend test - cylindrical mandrel (ISO 1519: 2011); rapid deformation test - impact resistance (ISO 6272-1: 2011); and determination of film hardness by pencil test (ISO 15184: 2012). The sheet steel was used as a substrate for these evaluations.

Dynamic viscoelasticity measurement was performed on a dynamic viscoelastometer (A&D Co., Ltd., RHEOVIBRON DDV-01 GP, Japan) and evaluated in order to measure the Tg and the elastic modulus.8 The measurement temperature range was -50 to 200 °C and the heating rate was 2 °C/min. The test sheet dimensions were 30 mm (length) × 4 mm (width) × 0.2 mm (thickness), the measurement frequency was 35 Hz and the load was 5.0 gf. The Tg was defined as the peak of tan d curve. The M–c was calculated using equation (1).

In order to clarify the design model of coating systems that create high chemical resistance, conventional coating systems were evaluated. The chemical resistance test results and other film properties of conventional coatings are shown in Table 4. The acrylic-urethane systems such as Ac-1/H-1, Ac-1/H-2, Ac-2/H-1 and Ac-2/H-2 were vulnerable to the test solution. The Ac-1/H-1, the Ac-1/H-2 and the Ac-2/H-2 were all peeled off from the substrate after the test (Rating = 1), and the Ac-2/H-1 was blistered (Rating = 2). On the other hand, the chemical resistance of polyester-urethane systems such as PE-1/H-1, PE-1/H-2, PE-2/H-1 and PE-2/H-2 were superior to acrylic-urethane systems. The PE-1/H-1 and the PE-1/H-2 were swelled slightly (Rating = 3). Furthermore, there were no observable changes in the PE-2/H-1 and the PE-2/H-2 (Rating = 4). These results indicate that the chemical resistance of the prepared conventional coatings depended on the structure of polyol, but not polyisocyanate. 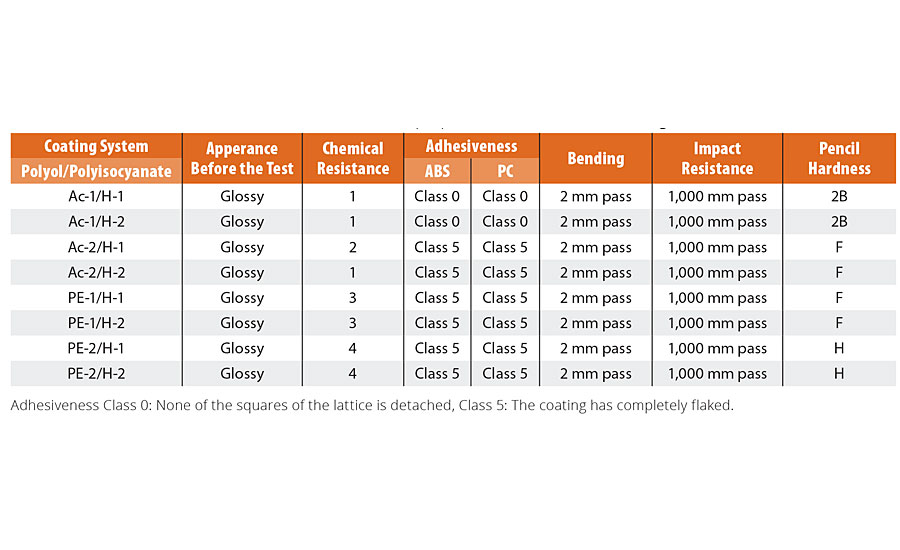 Meanwhile, focus on the film properties, the bend test and the rapid deformation test showed no significant differences in test results. The pencil hardness of the Ac-1 series, which had the lowest OH/M–n value, exhibited as most flexible (hardness= 2B). The hardness of the Ac-2 series and PE-1 series was F, and the PE-2 series was H. The adhesiveness of the conventional coatings except series Ac-1 to ABS and PC were not sufficient. A relatively flexible Ac-1 system was only effective in improvement for adhesiveness.

In order to estimate the factor of the difference of the chemical resistance in each polyol, the number of hydroxyl (OH) groups per molecular weight (OH/M–n) was calculated (Table 5). The OH/M–n of the PE-1 and the PE-2 were larger than that of the Ac-1 and the Ac-2. The larger OH/M–n value of polyester polyols produced a higher crosslinked coating. As a result, the highly crosslinked polyester-urethane systems exhibited better chemical resistance than the acrylic-urethane systems. 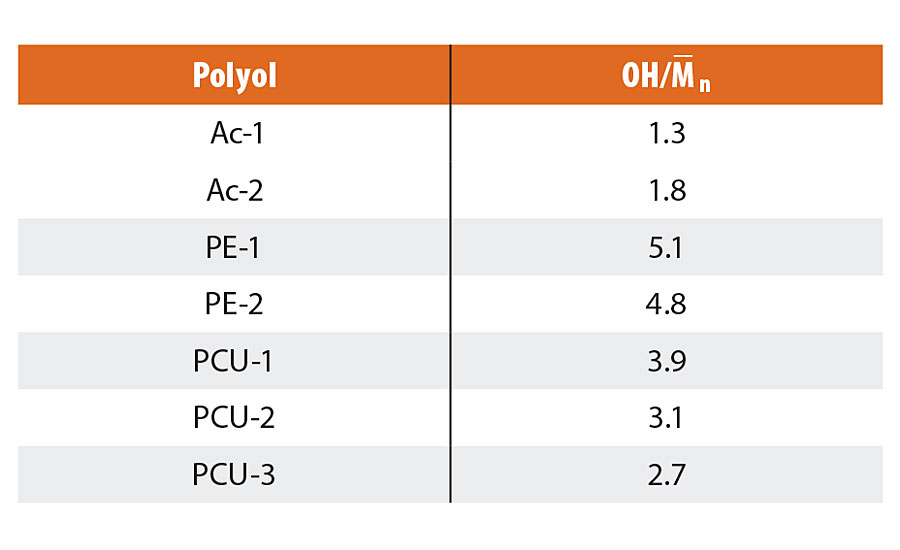 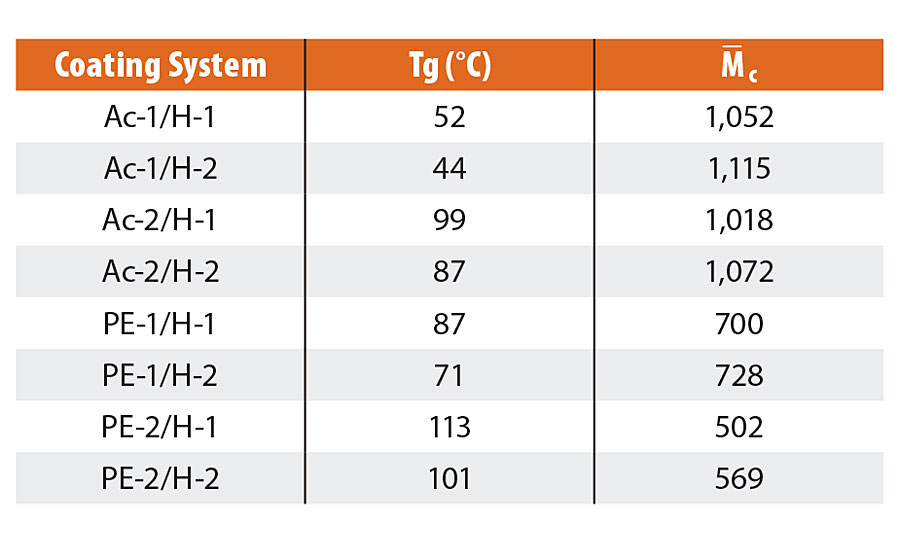 TABLE 6 » Tg and M–c of the conventional coating films. 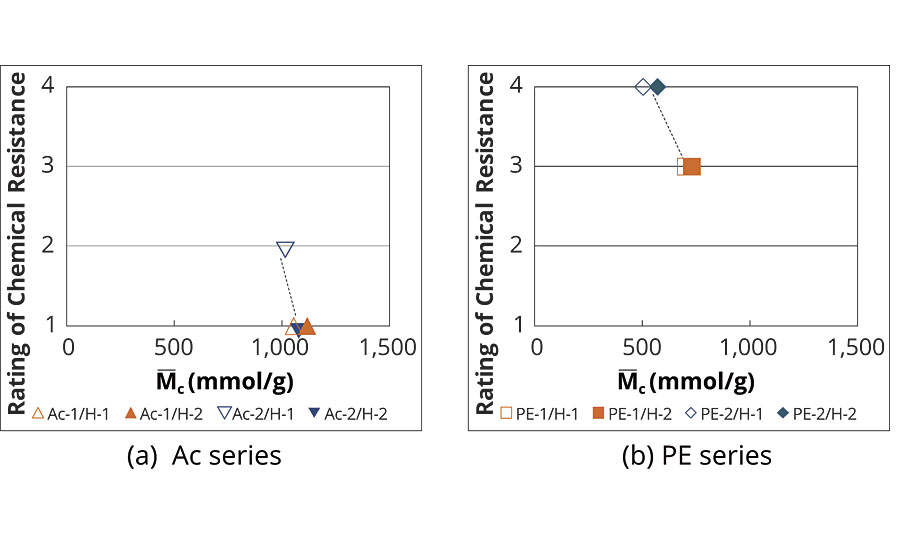 As can be seen from Figure 4(b) and Figure 5(b), the PE-2 system, composed of a cycloaliphatic unit and an aromatic unit, exhibited excellent chemical resistance with high Tg and small M–c. However, it is well known that polyester-urethane coatings undergo hydrolysis, and aromatic polyester turns yellow by UV irradiation respectively. These are the reasons why the use of polyester-based polyurethane paint systems is limited commercially. Therefore, there is a demand for a prominent coating that possesses not only the chemical resistance but also other essential properties.

Development of a Novel Coating System

From the results of the fundamental investigation, it was found that the polyol that has a rigid structure and large OH/M–n allows for the production of a prominent coating system in the area of chemical resistance.

Based on our knowledge of polyurethane molecular design technology, three types of PC-based multifunctional PU polyols (PCU) were prepared. The image and representative structure are shown in Figure 1. PC-based polyurethanes commonly provide excellent resin properties such as weatherability, hydrolysis resistance and chemical resistance. Flexible PC units could contribute to improved adhesiveness to ABS and PC substrates. It is also considered that PCUs generate hydrogen-bond interaction with urethane and urea bonds. This interaction gives higher Tg to the coating film, and is expected to add to the chemical resistance. Furthermore, PCUs were designed with a different number of OH groups without changing the main chain structure. The different number of OH groups in PCUs allows for the production of a variety of crosslinking structures, and helps to understand the relation between chemical resistance and M–c.

Characteristics of the novel polyols are shown in Table 1, and OH/M–n is also calculated (Table 5). The coating films composed of PCUs were prepared according to the film preparation condition, which is shown in Table 2, and the chemical resistance and other film properties were evaluated. The test results of the chemical resistance and the film appearance before the test are shown in Table 7. The appearance of coating films before the test was affected by the polyisocyanate structure. All the coating films composed of PCUs and H-1 were hazed because of the inferior compatibility with PCUs and H-1. On the other hand, all the coating films composed of PCUs and H-2 were clear and glossy. The chemical resistance of PCU-1/H-2 was excellent (Rating = 4), and PCU-2/H-2 and PCU-3/H-2 were inferior to PCU-1/H-2. These results were related to the OH/M–n of PCUs as expected. All the film properties were the same, especially the adhesiveness to ABS and PC substrates was excellent in each systems. 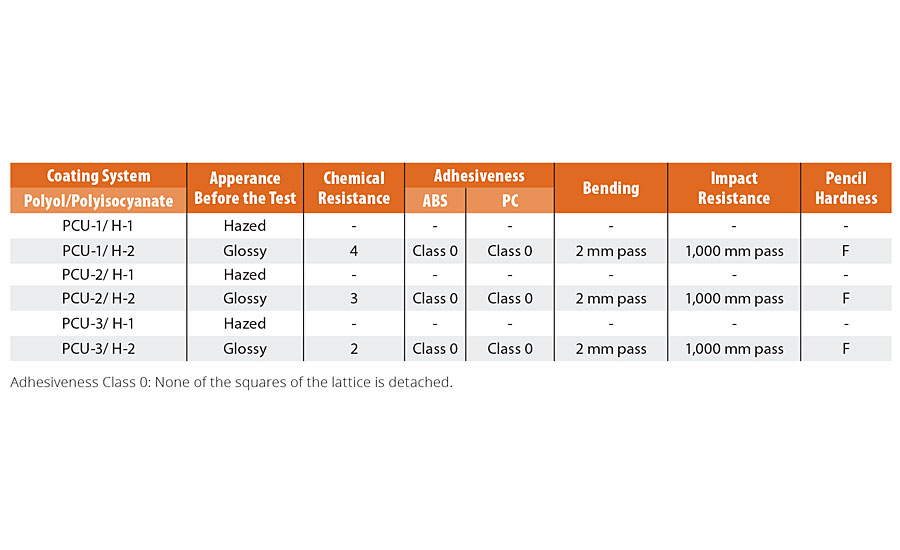 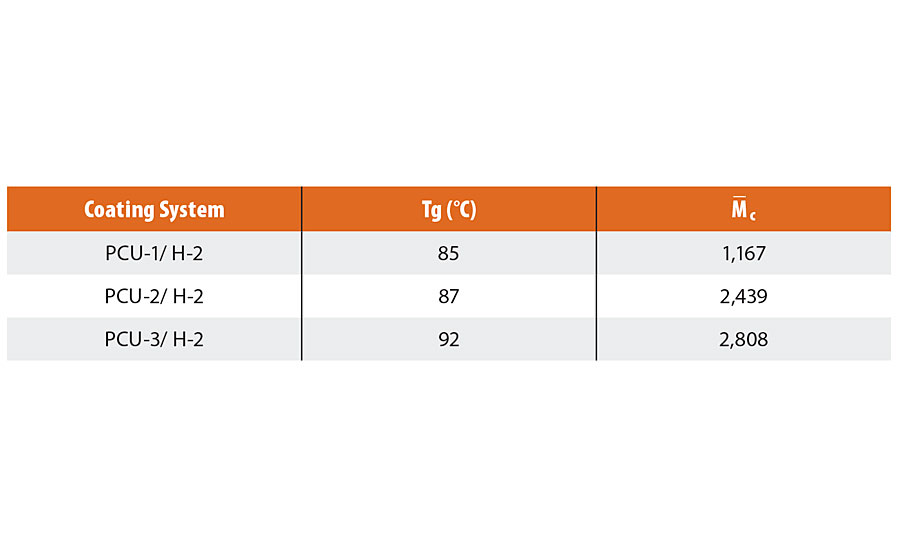 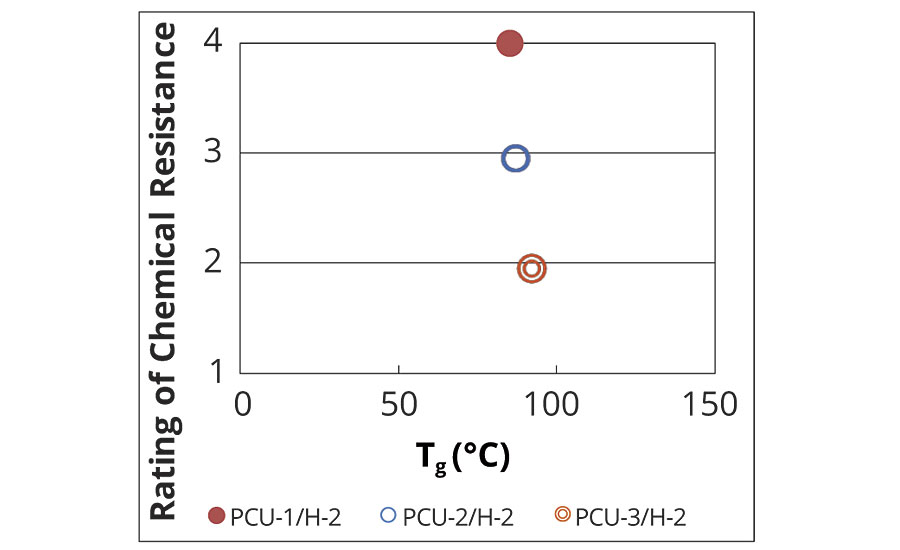 In this study, a variety of conventional coatings were evaluated in order to estimate the design policy for a novel polyol, and the PC-based multifunctional PU polyol was developed. The fundamental investigation gave us valuable information such as Tg and M–c, namely, higher Tg and smaller M–c are the requirements for providing the chemical resistance. By controlling the functionality of the OH groups in PCU, the relationship between chemical resistance and M–c on PCU system was confirmed. The coating film composed of PCU-1 and H-2 exhibited excellent chemical resistance, e.g., the coating film was stable to the chemicals composed of the UV absorber and DEET even if it was exposed to the chemicals for 4 hrs at 80 °C. Furthermore, the adhesiveness to the plastic substrates was also good, and other film properties were similar to conventional coating systems such as Ac-2 series and PE-1 series. This means that the developed coating system can be used for a one-layer plastic coating instead of existing coatings.

This paper was presented at the 2017 Polyurethanes Technical Conference.